Platformers, while one of the most prolific genres on mobile, are also one of the most divisive. You’ve got your traditional style platformers which act like they would on any other platform but feature a selection of virtual buttons for the touchscreen. Then you have platformers that go out of their way to try and figure out a control scheme that’s suited specifically for the touchscreen. To be honest, both styles of game have their fans and their detractors. There’s a lot of people who simply can’t get along with virtual buttons, and on the other hand some games that try to think outside of the box in terms of controls come up with something that feels too foreign and results in a game that’s difficult to play without actually rewiring your brain. Very few in that latter camp come up with something that’s truly a perfect fit, but I think See/Saw is the latest to crack that problem. 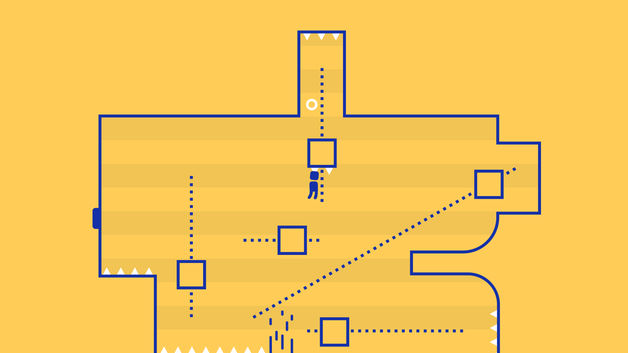 See/Saw comes from Philipp Stollenmeyer aka Kamibox, known for classics like Pancake – The Game and Sometimes You Die. Philipp also wanted to think up a platformer control scheme that worked perfectly on mobile, and so he stripped everything down to the very basics for See/Saw. You simply tap either the left or right side of the screen to move your character in that direction. To be more specific, your character actually moves in either direction because you’re literally tilting the level back and forth, like a seesaw. Get it? See/Saw? Also, there are LOADS of actual saws in the game, and dying at the hand of one is actually encouraged and required in more cases than not. The goal of each level is to collect 3 coins by any means possible, and you can even collect them if your character has met its demise.

Beyond moving left and right though, that’s about all you can do in See/Saw. You don’t even have a jump button, rather you can run fairly high up walls and then change your direction so as to float through the air and obtain out of reach coins, and there are also pre-placed jump pads in most levels which will also launch you into the air. The floaty physics and the game’s concept in general feel very similar to the N+ series of games, and in that spirit there’s an extra incentive to go back and replay levels you’ve already beaten to try and collect all 3 coins within a certain time limit to earn a special star for that level. If you’re the completionist type then See/Saw will take you quite a while to fully master, as if just beating its more than 150 levels wasn’t enough.

See/Saw is really the epitome of what I like to see in a mobile game. The controls are something you don’t even have to think about, and you can devote all of your attention on the actual mechanics and beating the tricky challenges contained within. There’s even an amusing story to follow that gives me a heavy Portal vibe where you’re basically the participant in some twisted experiment where the folks running the experiment care very little about the dangers you’re putting yourself in. It’s just a total package and a wonderful example of making a challenging platforming experience that is perfectly suited to the touchscreen. Like all of Stollenmeyer’s mobile games, See/Saw is one you don’t want to miss.