Whatever has gotten into the water on the App Store lately, I sure hope it keeps up. We’ve been getting a bunch of premium, high-quality paid apps lately, though most of them have ports from other platforms. Whither the originals? Here’s one answer to that question: GrimValor ($6.99), the latest game from the people behind the delightful Swordigo (Free). Like that game, this is an action-adventure, and it’s no trifle. It looks good, plays well, and offers an obscene amount of content, with no IAP, ads, or any other shenanigans. If you’re just here for a thumbs-up or thumbs-down, you can head on over to the App Store right now and hit that little Buy button. Enjoy. 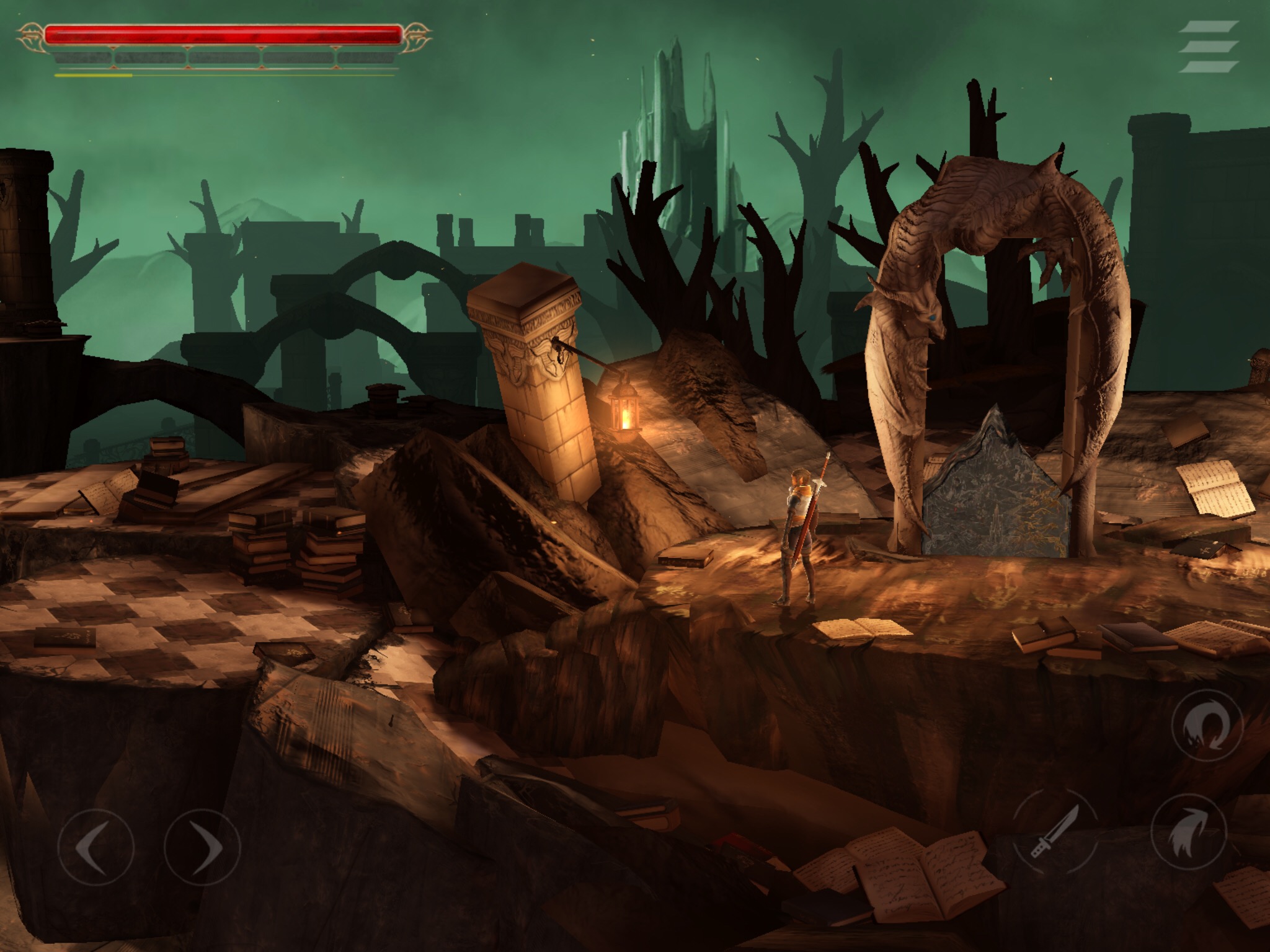 Still here, hunh? I guess you want to know a little more about the game before you blindly buy it. Or maybe you’re bored and looking to kill a little time, but not by playing a game because if your boss catches you one more time, you’re in for it. I can dig. So let’s go into GrimValor a little and shine some light on the many things it does so well. The first thing that’s going to hit you is that this is a pretty nice-looking game. Oh, it’s not going to have the console gamers gawking in awe or anything, but it looks great when compared to its peers on mobile. The presentation is definitely going for a dark fantasy vibe here, but I’m trying to get through this review without referring to that game, so just imagine dark corridors, derelict castles, and grimy-looking armored zombie-type things, all lit by torches scattered here and there.

The next thing you’ll probably notice is that the game’s controls work quite nicely. You can use an MFi controller if you have one, but the virtual buttons are more than up to the task. You’ve got left and right buttons for moving, a jump button that… well, it makes you jump, a dash button that is used for moving speedily and getting out of the way of attacks, and an attack button that also serves as a use button. When you start the game, you don’t have to think too much about things. Hold the attack button or tap it to keep on swinging, and maybe dash if you see an attack coming your way. You can double jump, dash in mid-air, run up walls, and do all sorts of other nifty things to cut your way across the enemies and obstacles in your path. You’ll need to master these basic movements as soon as possible, especially if you want to take down the first boss you run into. You don’t have to take down that boss, mind you. The story will proceed either way. But you can actually win if you get used to dodging and attacking quickly enough. 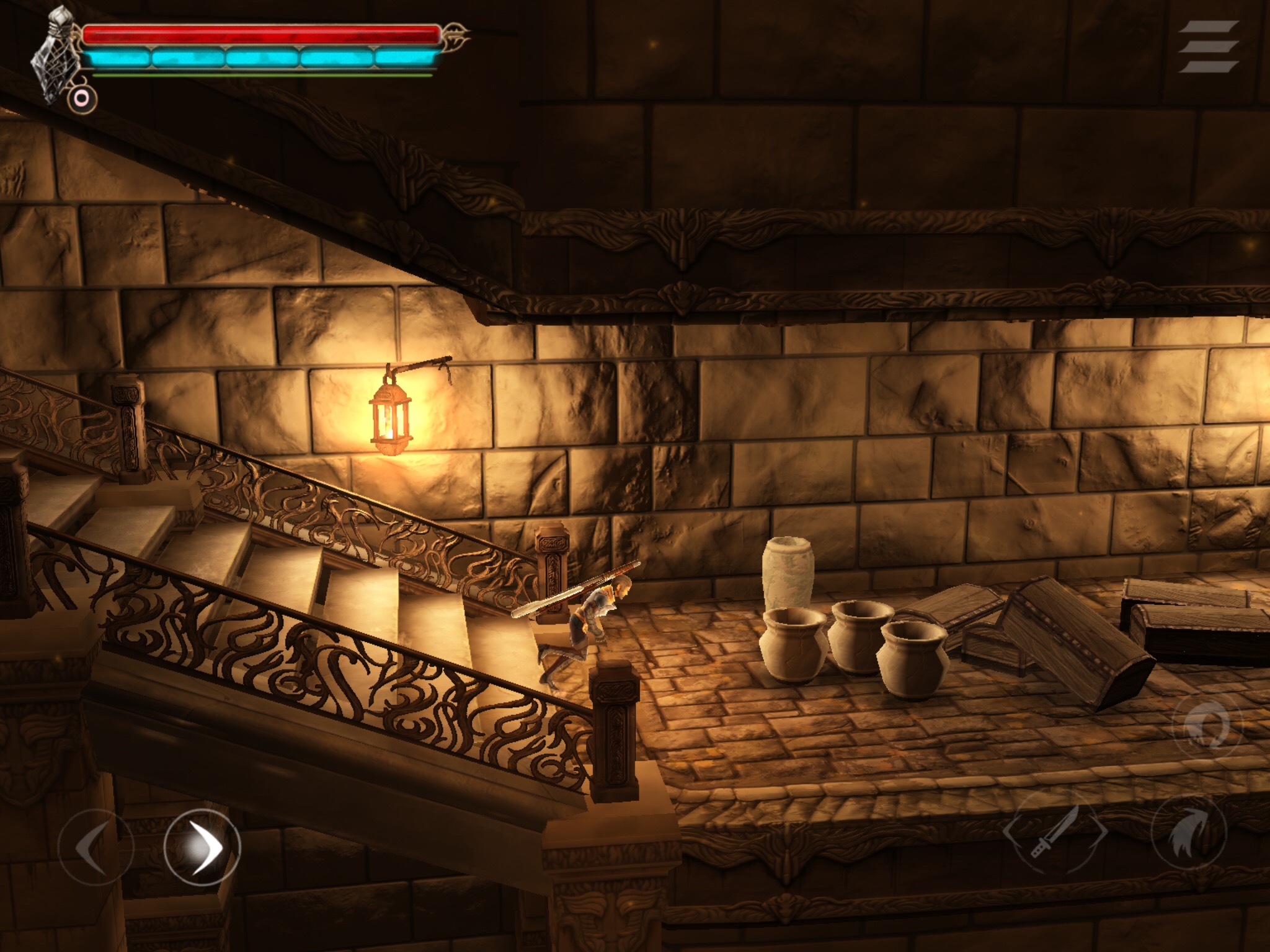 As you play, you’ll earn new abilities and get access to new items. You’ll have to swipe the attack button in different directions to trigger a variety of attacks, or make use of items by holding anywhere on the screen. You’ll find new weapons, upgrade existing ones, and pick up trinkets that convey various effects. You’ll need to mind not just how much health you have remaining, but also how much soul power you have, as it fuels most of your stronger moves. Your chosen character’s movements are smooth, though as with Swordigo, the collisions can feel just a little gummy when you’re near walls and platform edges. It’s not a big deal, but it’s the one bit that looks weird in an otherwise sharp-looking game. One big improvement over Swordigo, at least as I remember it, is just how fast your character is in this game. If you’re just looking to cover ground, the dash will zip around lickety-split.

Combat largely comes down to learning enemy patterns, noting openings, and taking advantage of said openings to deal as much damage as you can. Defense is also important, because if the bigger enemies connect with you, things will go south quickly. Even the smaller ones can cause trouble if you don’t keep an eye on them, as they can put you in a vulnerable position that the more dangerous enemies will happily take advantage of. You need to be especially mindful of bosses, who aren’t above teaming up with a bunch of mooks to make your life more difficult. Then again, the goon squad will feed your soul energy, so they’re at least a little helpful to the practiced player. You’ll also need to be cautious of hunters. Every so often, you’ll get a message that you’re being hunted. What that means is that an extremely aggressive, powerful enemy is in the vicinity. They’re strong, but if you take them down the rewards are nice. 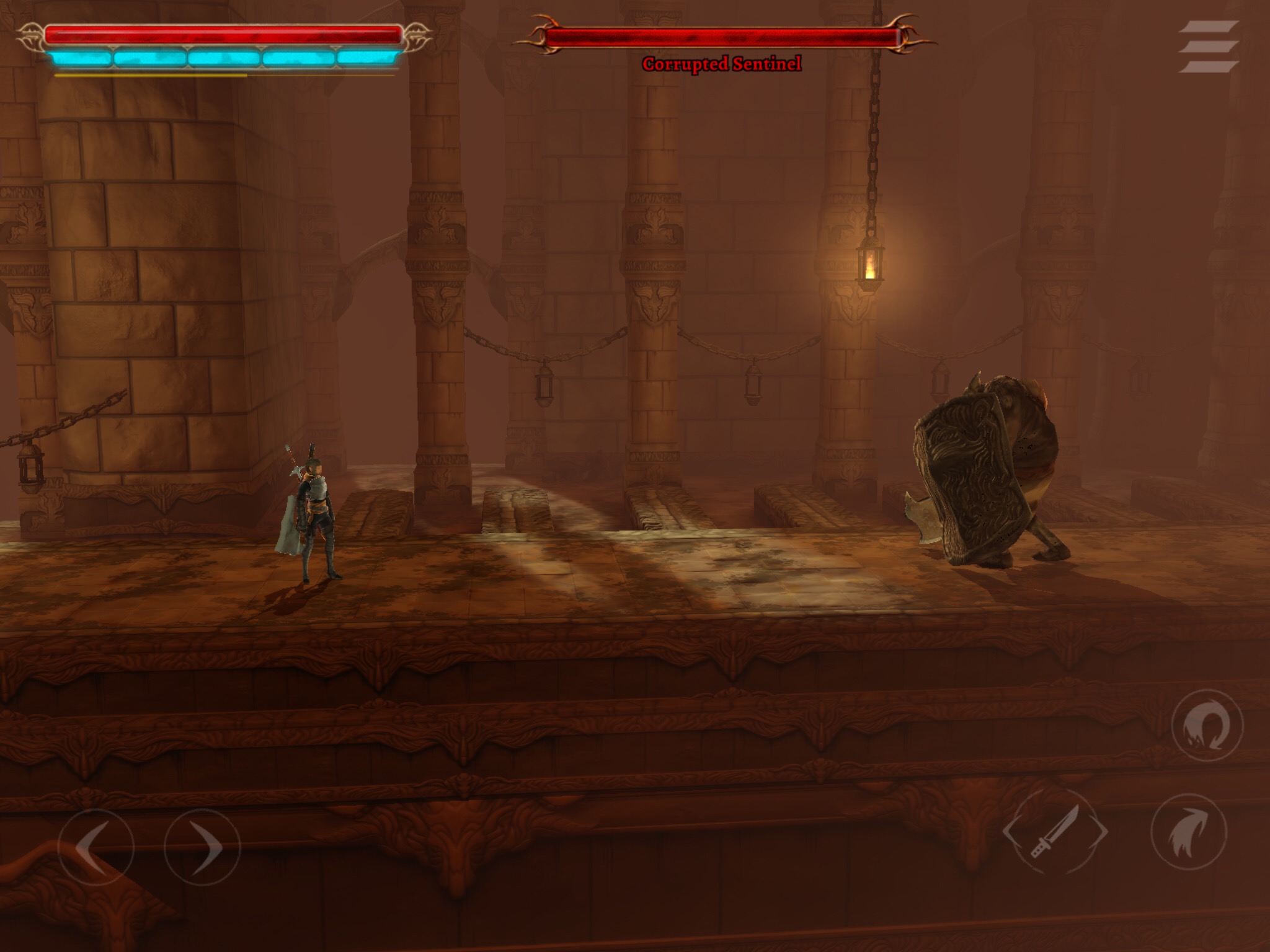 Should the worst happen and you die, you’ll know the eternal suffering of… well, not that much, actually. You’ll get kicked back to your last save point, but with all the experience, items, and currency you collected intact. As you can only level up at a save point, this may actually be doing you a favor. Sure, you’ll have to backtrack, and all the enemies you killed will be back, but that just means you’re always getting stronger. It’s a light slap on the wrist, really, and I can’t say I mind it that much. You’re probably going to die a lot, especially as things start to heat up. If the punishment were too severe, I could see a lot of people just giving up on the thing. This doesn’t make the game easy, because you still have to make it through each section to the next save point if you want to make any progress.

The movement feels good, and the combat system is on point. All of that is well and good, but it would be for naught if the world design wasn’t as good as it is. There are plenty of secrets to find, lots of interesting layouts to jump and dash around, and good set-ups for combat situations. The world is absolutely massive, but you’ll unlock fast travel options very early on, making it easy to backtrack. Your map will also tell you how many secret treasures are remaining to find in each area. You don’t need to complete everything 100% to finish the game, but it feels good topping those numbers off. It will take a long while to do that, however. GrimValor is a legitimate 15+ hour game just to get to the ending, and you’re almost certainly going to need more than 20 hours to wrap everything up 100%. 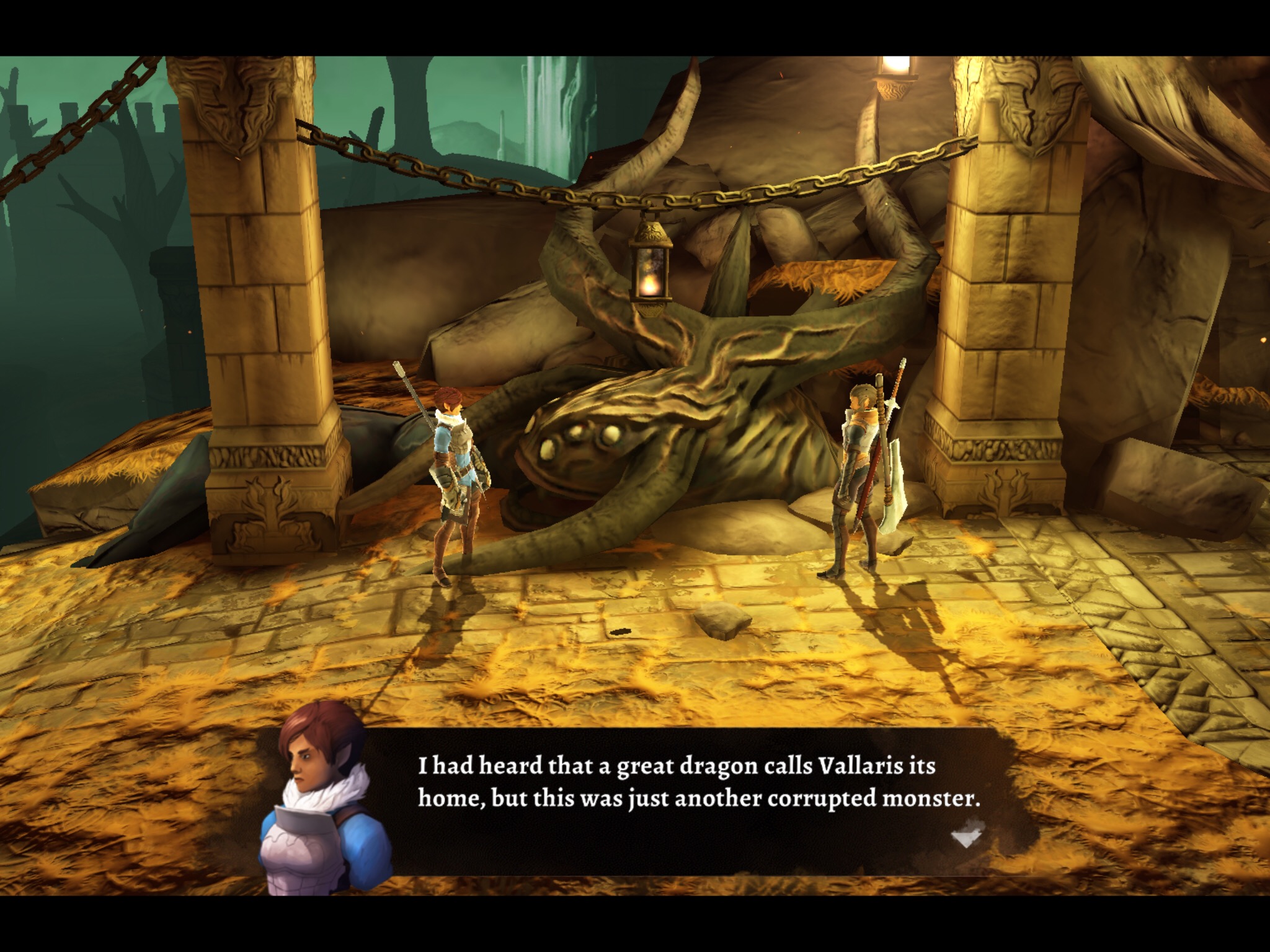 Impressively, it never feels like a drag. This is the benefit of nailing down the basic mechanics as well as they have here. It always feels great to whip through battles without taking hits, and zooming around with your dash adds to that feeling of power. The RPG mechanics add another layer that keeps you playing. You’ll be chasing that next level, that next upgrade, or that next trinket until the end of the game and beyond. About the only thing that got a little tiresome over the course of the game was the game’s occasional attempts at direct story-telling. There’s kind of a story here, but it’s not really up to the standards of the rest of the game.

Anyway, that’s GrimValor. People have been after the good folks behind Swordigo to do another game like it for quite a while now, and while this is thematically quite a departure, you can feel the same spirit coursing through its veins. Like its spiritual predecessor, I suspect mobile gaming fans will be playing and replaying this one for years to come. I’m a little surprised to see such effort behind a paid original title on mobile in 2018, particularly without even a hint of added purchases to be found in it. I hope it works out for the developers, because I’d love to see more feasts like this come across my mobile plate now and then.