As we mark the one-year anniversary of SEGA Forever, it’s safe to say it’s been a bit of a bumpy ride so far. An amazing trailer showcasing SEGA’s rich history gave way to a tepid, problem-filled launch largely consisting of poorly-emulated Genesis games. After getting off on a bad foot, SEGA hustled to improve the emulation and the line-up on the whole, to varying success. We saw the revival of some long-dead mobile releases like Super Monkey Ball, some curious selections from SEGA’s 16-bit catalog like Decap Attack, major upgrades to the Genesis emulator quality and feature set, and less happily, absolutely no releases from non-Genesis consoles save the ones SEGA had ported ages ago. Perhaps it’s appropriate that as the first anniversary arrives, it’s being celebrated with the release of a well-emulated, full-featured version of one of the more technically impressive Genesis games, BlueSky’s Vectorman (Free). 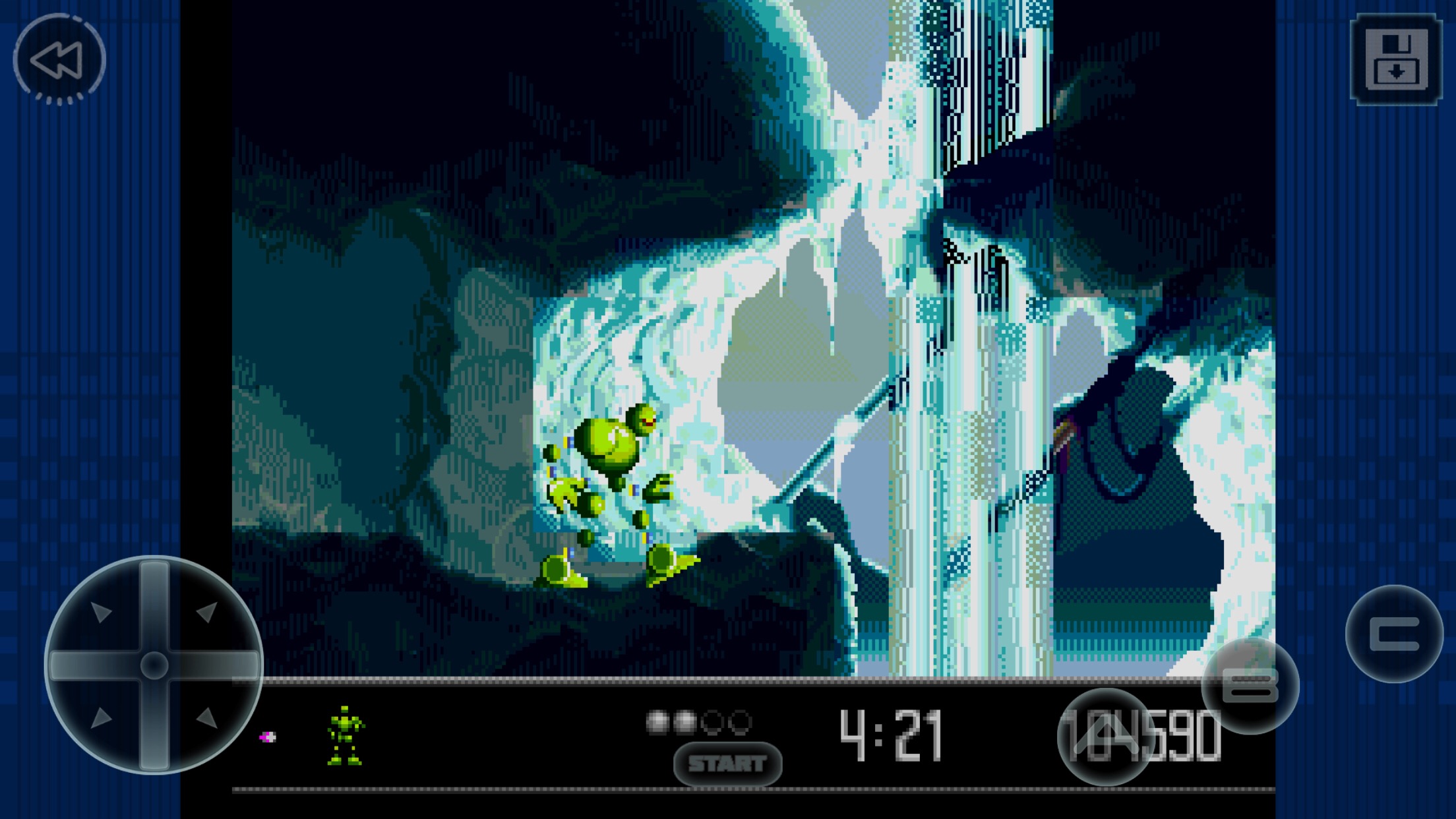 SEGA and its development team has put in a lot of work on the Genesis emulator used by SEGA Forever, and Vectorman is a fine showcase for that progress. It looks great, runs well, and sounds very good indeed. You can use save states, flick between a handful of visual settings, rewind your playthrough at the tap of a button, and customize your virtual controls to your heart’s delight. Like virtually all of the SEGA Forever releases, you can also play with an MFi controller if you want the authentic experience. If you’re going with touch controls, the usual rules apply. This is a tough game that relies on accurate shooting and maneuvering, and doing all of that with virtual buttons is going to test your patience at times. Luckily, you can try the game out for free if you can tolerate fairly regular ads, and if you find the controls aren’t killing it for you, pay to remove the ads and activate a couple of extra features with a single reasonably-priced IAP.

How about Vectorman, then? Well, I think it’s really important to understand the context in which it originally released. The game came out on the Genesis in late 1995, capping off what could delicately be called a rough year for SEGA. Nintendo’s late 1994 release Donkey Kong Country had finally given the Super NES the kick in the pants it needed to start outpacing the Genesis even in its strongest regions. The 32X attachment for the Genesis, meant to extend the life of SEGA’s most successful console, had utterly flopped and was almost entirely disowned by SEGA of Japan right from the hop. A lot of that was because SEGA’s Japan side had their own 32-bit solution, the SEGA Saturn, which launched in late 1994 in Japan and had a surprise release in North America in May of 1995. Unfortunately, the new system was already tripping over its own feet after Sony and its PlayStation made SEGA look like utter donkeys at the inaugural E3 show. Things weren’t going so well. 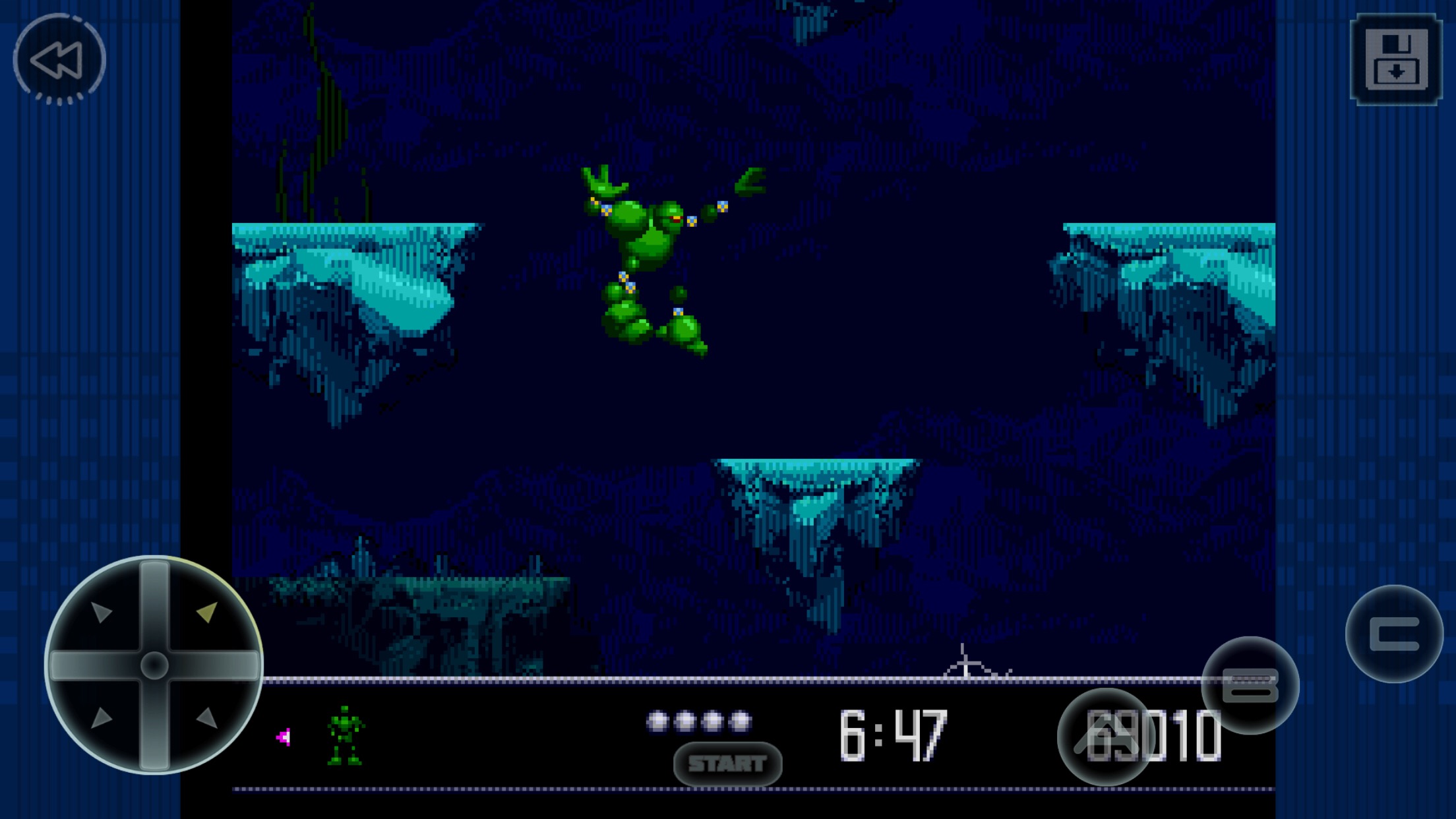 See, the Genesis was an odd situation for SEGA. In North America, it competed strongly against the Super NES for the first-place position, a true neck-and-neck race. In Europe, it was clowning Nintendo. But in Japan, the system was a distant third place, coming in behind even the PC Engine/Turbografx-16. SEGA is, of course, a Japanese company, and that meant that ultimately Japan was pulling the strings. They were ready to move on to a new console, and that meant SEGA’s finest Japanese development teams were moving on as well. SEGA of America, on the other hand, had a vested interest in keeping the Genesis rolling. To that end, they sunk money into a lot of American and European studios, producing a steady trickle of Genesis software well after things had dried up on the other side of the Pacific. One of the more successful partnerships of that sort that SEGA had was with BlueSky Software. The resulting software included games like Shadowrun, Jurassic Park, World Series Baseball, and of course, Vectorman.

At its core, Vectorman is a run-and-gun platformer, a genre that was already very well-represented on the Genesis platform when the game released. You control the titular ‘bot as he runs, shoots, and double-jumps his way through 16 fairly large stages. There are power-ups to collect that will temporarily give you new weapons or special transformations, but at the end of it all it’s going to come down to how well you can hop, blast, and duck. Most of the stages use a familiar side-scrolling view, but a few of them switch to an overhead view to mix things up a little. Vectorman is quite a versatile fellow thanks to his double-jump and ability to shoot in eight different directions, and unlike many run-and-gun heroes, he can even take a few hits before dying. Wow, does he have any weaknesses? Well, yes. If he runs out of lives, that’s it. No continues. No do-overs. You’re back at the start of the game. So, you know, make use of those save states. 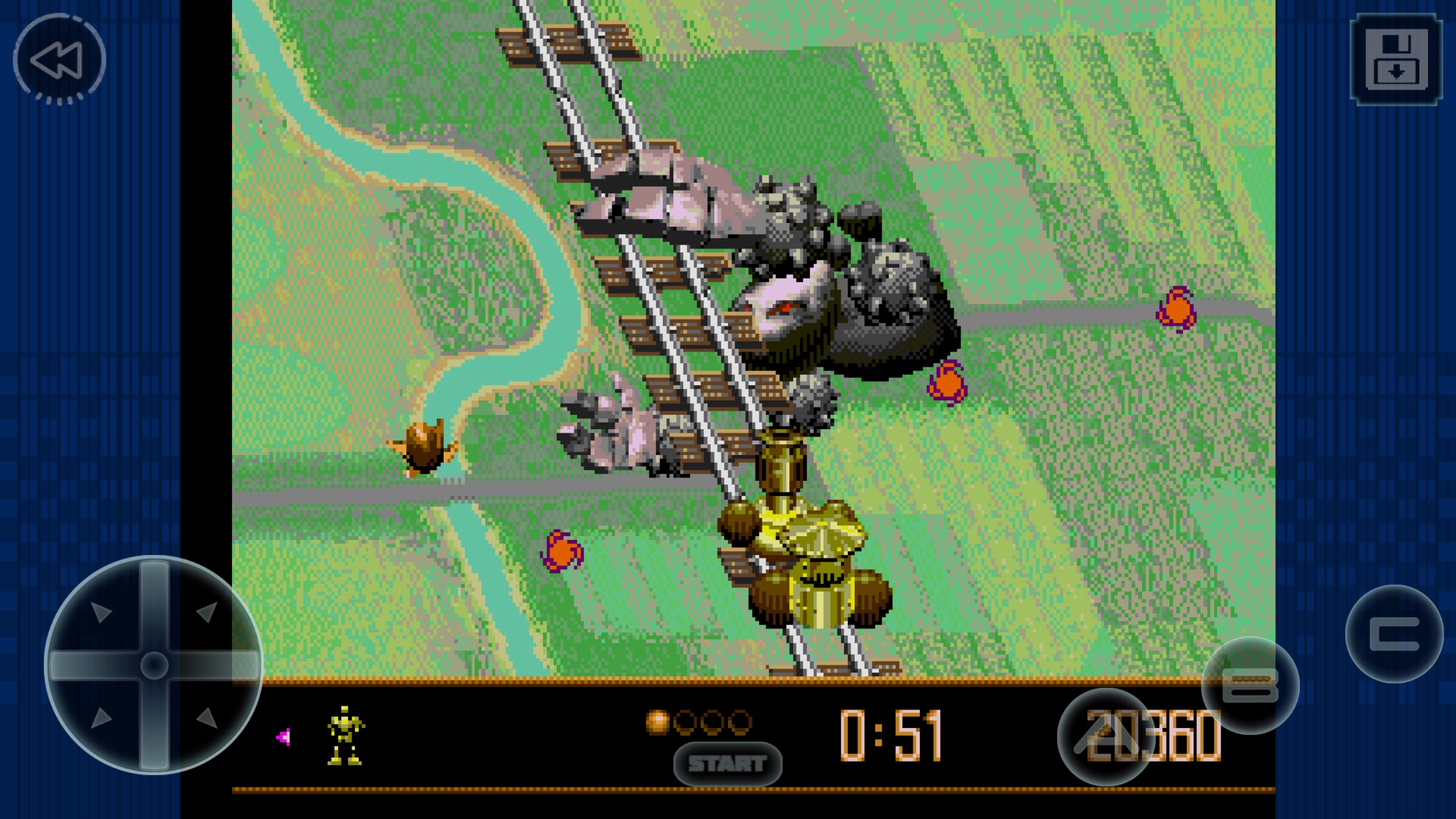 You can tell Donkey Kong Country was on somebody’s mind, though, because what really stands out about Vectorman is how gosh-darned good it looks. The hero is made up of 23 individual sprites moving in tandem, and everything has that pre-rendered shine that Donkey Kong Country had made so popular. Vectorman’s sprites are affected by various light sources; obviously a bit of fakery, but a very impressive bit nonetheless. Everything is smoothly animated, and some of the backgrounds really are to die for. That’s all backed with an amazing soundtrack composed by Jon Holland. It really is a stunning technical showpiece for the Genesis, even if a lot of that is (in the fine Donkey Kong Country tradition) from clever design decisions as opposed to any magical unlocked horsepower in the hardware itself.

As for how it plays, well, there are better run-and-gun games on the Genesis without a doubt. Vectorman is a little slippery and hard to get used to at first. The enemy designs are a little boring and everything takes way too many shots to destroy. The bosses are a bit underwhelming. The overhead levels don’t really work as well as you might like, and the power-ups lack a certain punch. It’s probably a little hard and unforgiving for its own good, though there are tons of cheats you can use to mitigate that. I could see any or all of these points turning some players off. Nevertheless, I think Vectorman is quite a bit of fun if you get used to its quirks. For whatever the enemies and levels design might lack, the main character is just a lot of fun to move around and attack with. It’s worth getting over that initial hump, especially since the level designs generally get better as you go along. 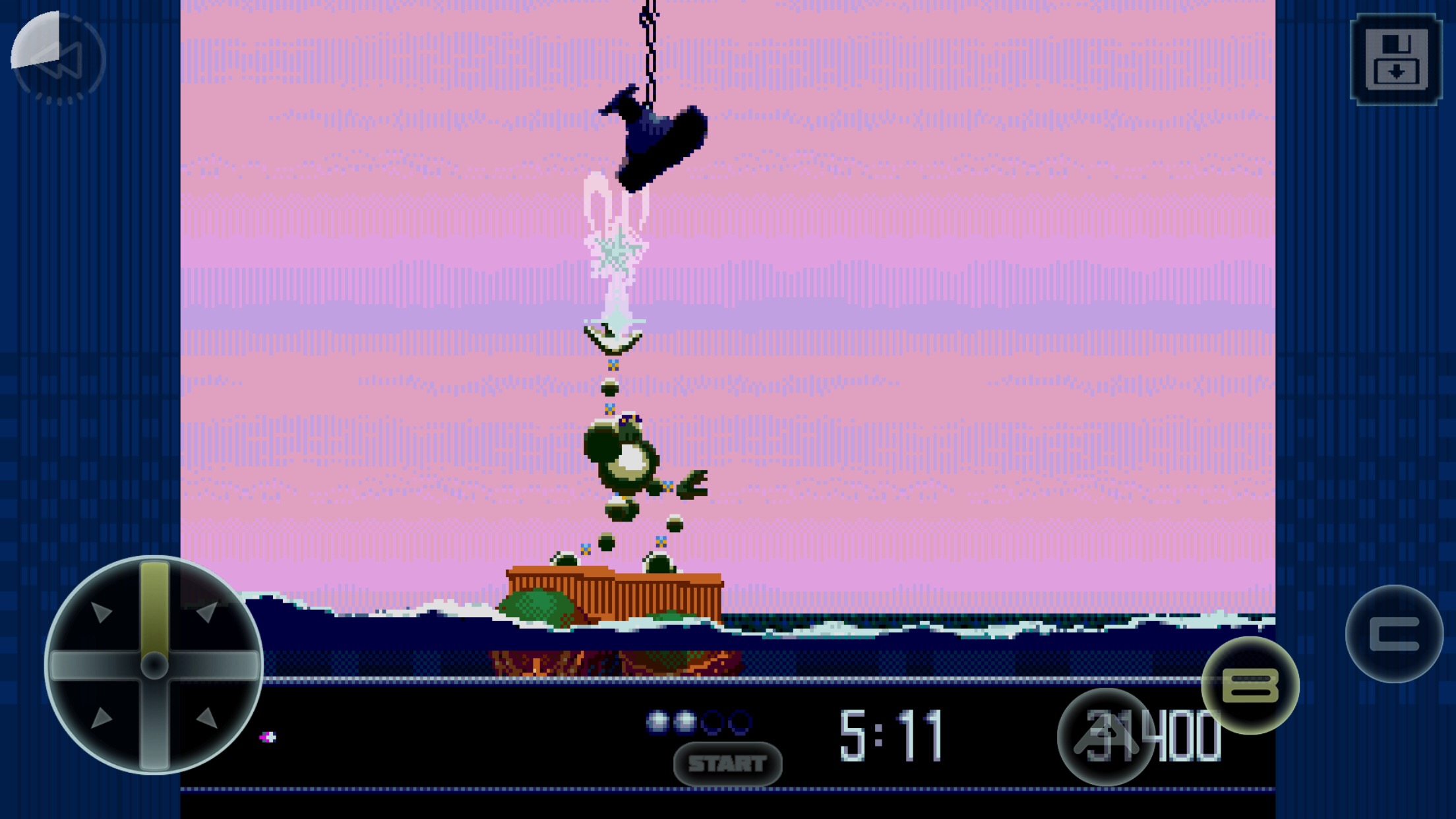 Basically, abuse those save states, try to give the game a few levels to unfurl, and if you have an MFi controller, you really should be using it. The more of those things you can check off, the better you’ll find Vectorman to be. Yes, it’s a game that largely gets by on its good looks, but it’s not just flash. There’s a solid action game here, one that has more than a few rough edges, but certainly worth playing. This particular version of the game is about as good as you’re going to get on a mobile device, though I do wish I could load my saved game as easily as I can save it. This is a really tough game, so having to go back to the main menu to load every time I screw up is a bit annoying. Apart from that, this is as good a way as any to close out SEGA Forever‘s first year.