Let’s face it, the human body, even your body, is pretty disgusting. It oozes various fluids, the upkeep on it gets progressively more difficult as you get older, and if you peek into its insides with x-rays or ultrasound, there’s all sorts of weird, indescribable (to laypeople, doctors mostly understand this stuff) things happening there. Homo Machina ($2.99) does all of us a favor and imagines the inside of a human body as a mostly orderly series of machines that govern different bodily functions. Congrats, you’re a cyborg, albeit one with late 19th/early 20th century technology. Also, there are tiny people, a whole slew of them in fact, running around in your innards, helping to regulate all your various processes. But again, we’d submit that it’s really no stranger than what goes on inside your body IRL. 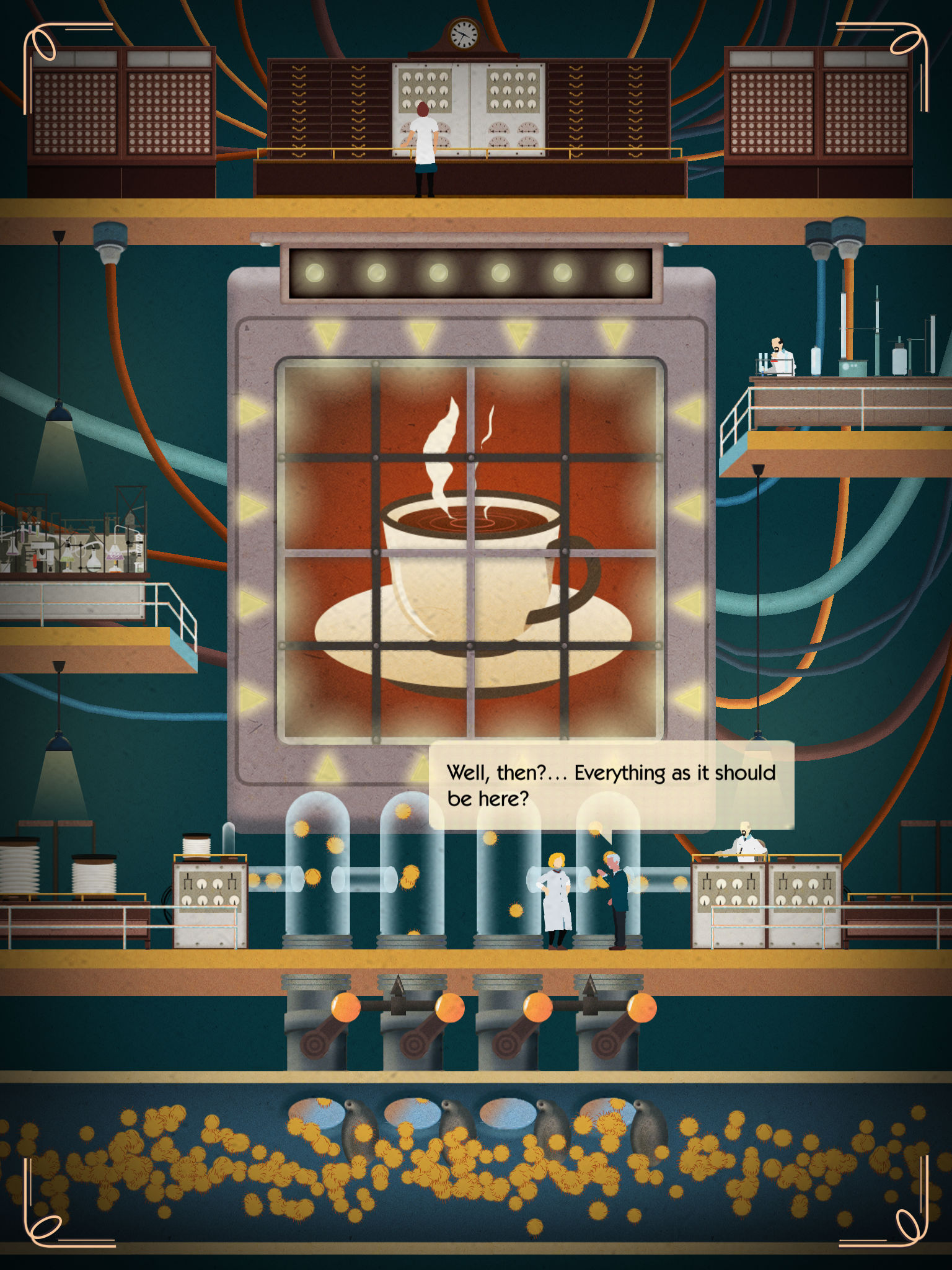 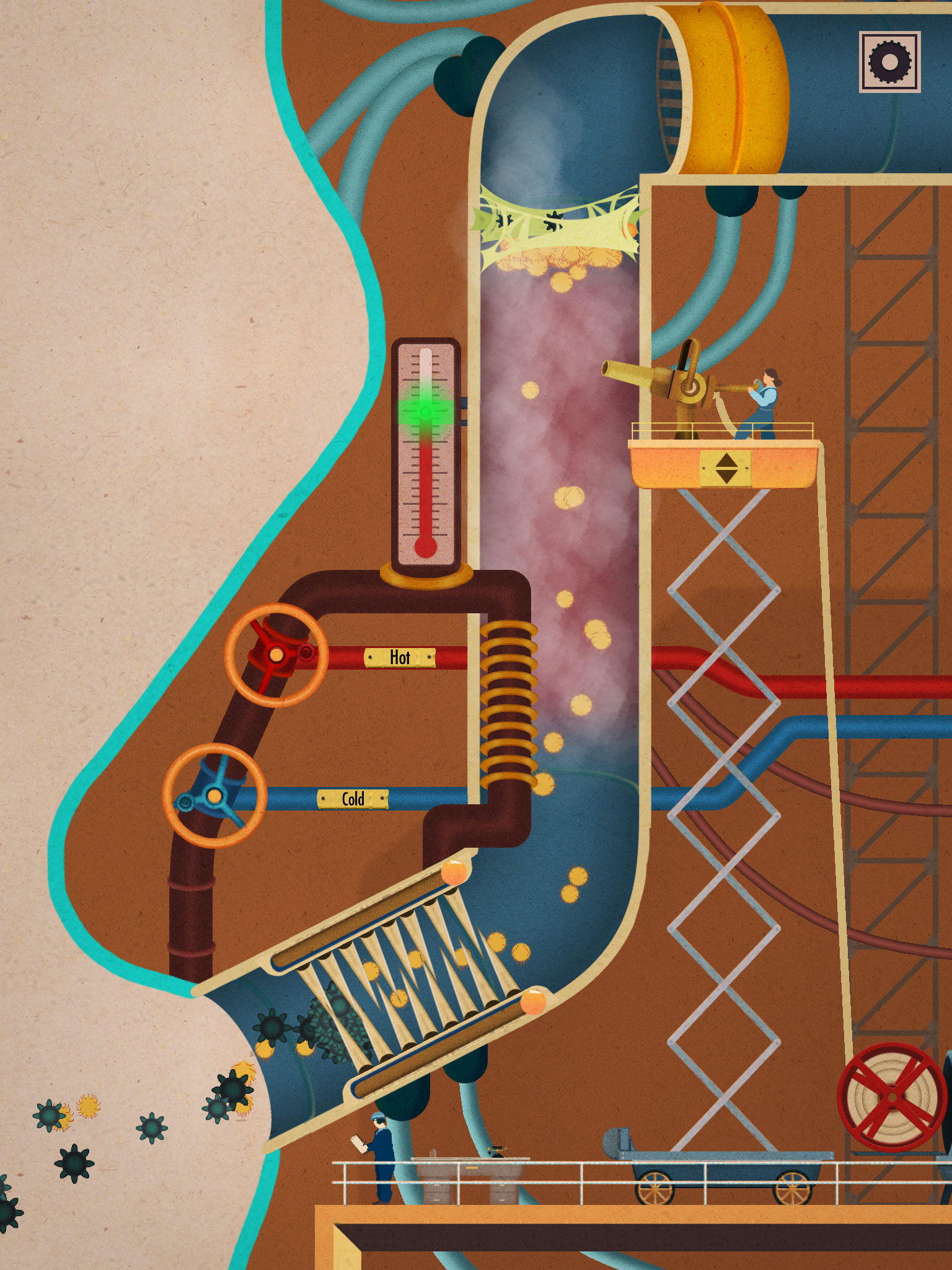 The developers at Darjeeling didn’t just come up with the idea for Homo Machina out of the blue. Rather, they were openly inspired by the work of Fritz Kahn, a doctor and scientist whose main calling card was describing the workings of the human body using machines as metaphors: the ear as a car and things of that nature. Kahn’s work was so influential, even after his death in the late ’60s, that he’s considered the father of infographics. He also reportedly rode out an earthquake once and survived by hiding inside a sarcophagus, which has nothing to do with this game but is too awesome not to mention. In any case, the spirit of Kahn is very much alive in the art style of Homo Machina, which not only depicts the body as something from one of his illustrations, but also uses a color palette and in-game fonts that immediately evoke the 1920s. The animations have the kind of background “noise" that suggests an old newsreel film, and even the transitions between scenes remind you of a black and white movie from days gone by.

“Scenes" is actually the right word to describe what you’re doing in this game, because despite what it might seem, this isn’t a body sim. Instead, it’s more of a narrative-driven puzzle experience, framed by the task of getting the body in question prepared to go through its day and then successfully navigate a “romantic encounter" that evening. The story is more than skin-deep, no real pun intended, because the tiny people at your command are literally faceless but do have personalities of their own. The important ones do, anyway, including the well-meaning but somewhat hapless director and his much more competent secretary/assistant, Josiane.

In each chapter, you’re introduced to another part of the body and the people and machines in that area. You’re also presented with several tasks, usually parts of a bigger whole like getting the nasal passage unclogged to enjoy something the body is smelling, chewing and properly digesting food, and other everyday actions to which we don’t give much thought (truly, since some of these activities are autonomous, thank goodness for that). There are no controls per se, as anything you need to accomplish can be done by simply tapping, sliding or dragging things around the screen.

if that sounds like it’s pretty simple, you’re not wrong. The trick is that there are no explicit directions telling you what to do. Indeed, just like your own messy mound of flesh and bones, there’s no instruction manual to the human body as depicted here. Occasionally, you can take hints from the dialogue, as the director and other characters will sometimes get a little impatient and nudge you in the right direction but not everyone in the game is in a talkative mood — which is understandable, since they’re hard at work, and no one likes people just interrupting them on the job — and figuring things out by trial and error is a big part of the experience. Many things in each level are interactive, so even when you stumble upon something that isn’t directly related to the task at hand, it often pays off with an amusing animation or sound effect. Paying attention to even the tiniest visual cues is also important, as bits of movement can often point the way to where you need to focus your efforts next. 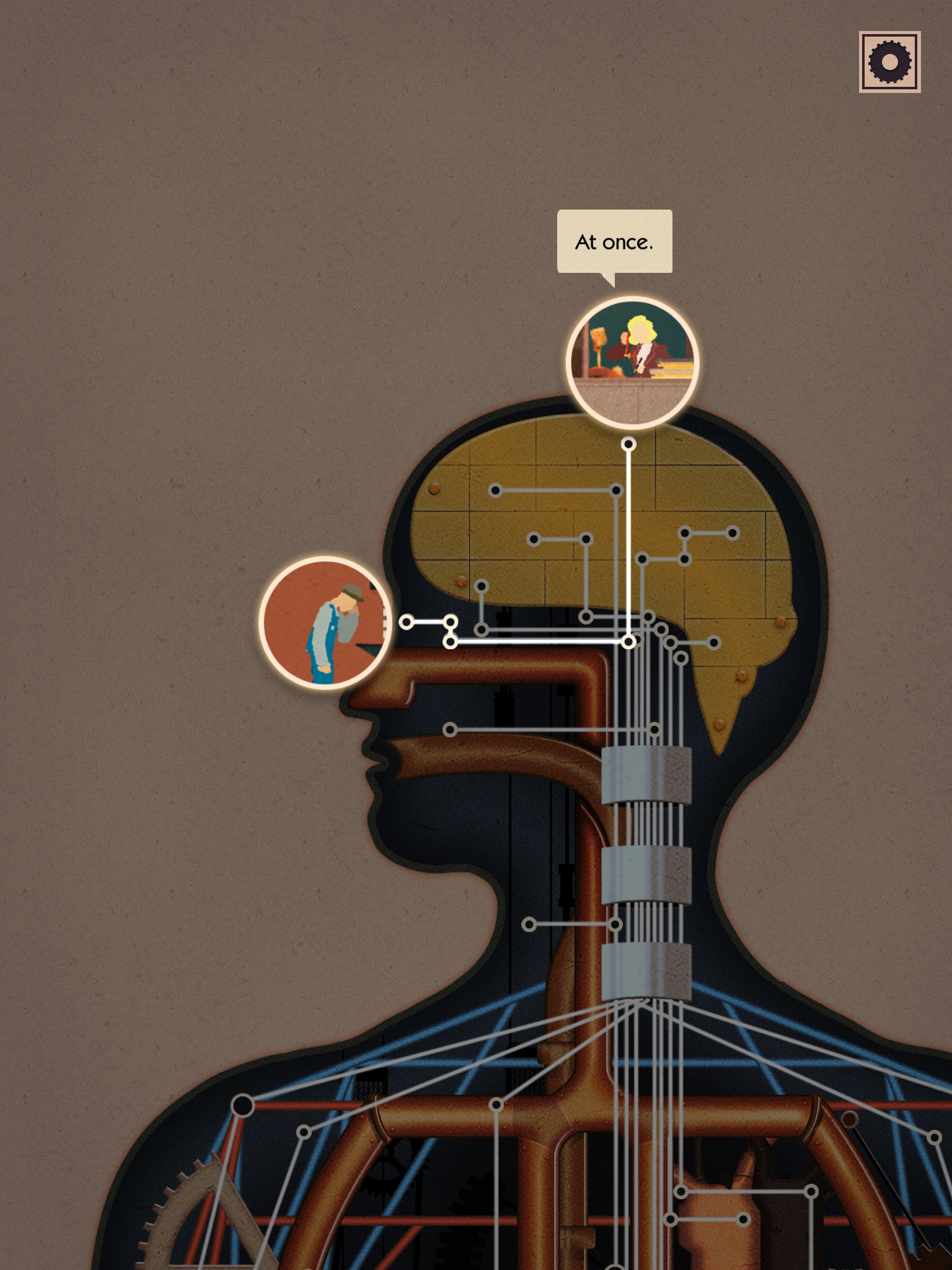 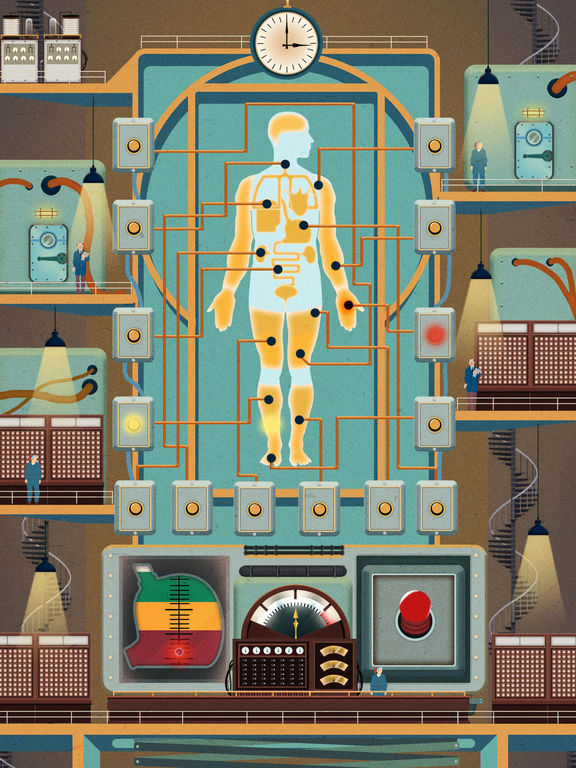 Almost every job you encounter is actually a series of connected mini-puzzles. For example, in the stage where you are in command of the olfactory process (that’s a fancy word for smell), you have to get the pleasant smells through the nasal passage and deeper into the body. Doing so requires activating the filters that block out bad smells, unclogging several jams in the sinuses and adjusting the temperature so that it settles in the proper range. Those three jobs can be completed in any order, but all three require you to do something a little bit different, and you can’t move on until you’ve figured them all out.

While some levels let you solve them at your own pace, others up the ante by introducing time pressure to the equation. There’s one scene set inside the central nervous system that requires you to trace wires back from specific areas of the body and hit the corresponding buttons to activate those parts before a timer runs out. It’s much more frantic than anything that precedes it, but it’s also fun because it ratchets up the challenge so suddenly. Even if you fail, which you surely will a time or two, there aren’t any permanent repercussions for doing so. Homo Machina is a game that wants you to beat it, even if it’s not right off the bat. That’s okay, too, because just spending time in its world is a pleasure in and of itself. 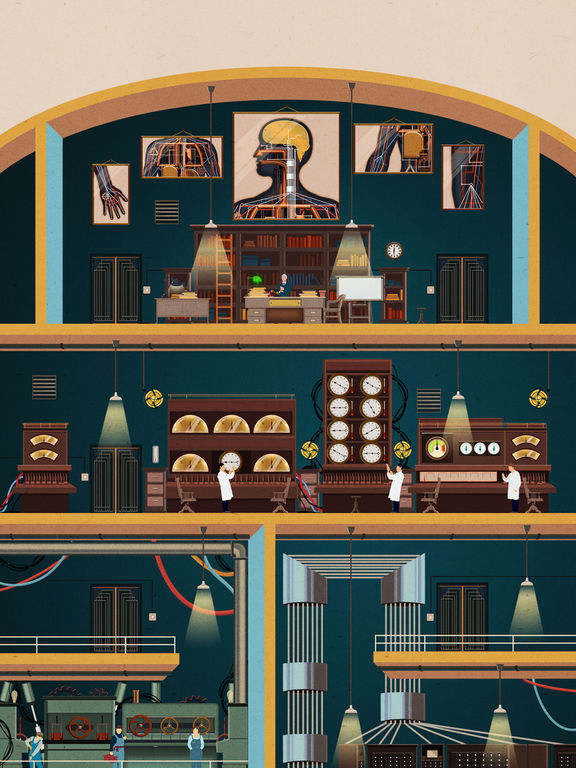 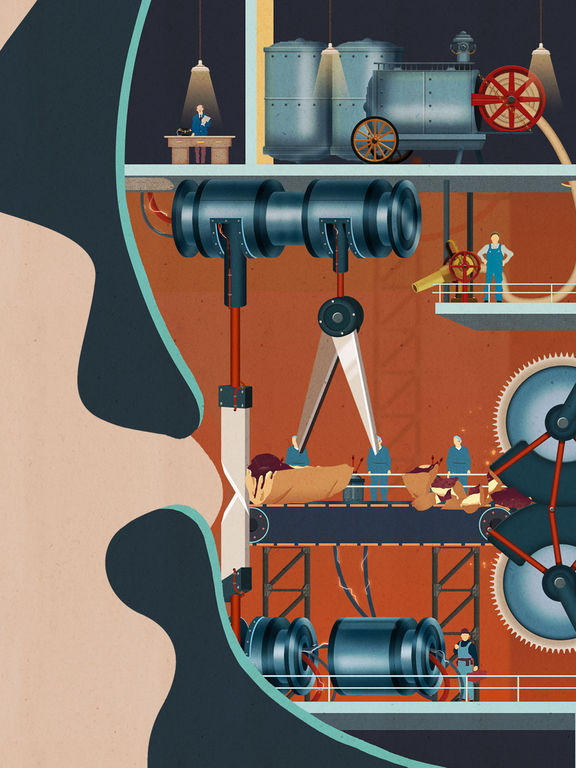 The question is whether it’s enough to keep you hooked for an extended period of time. Several of the commenters in the App Store have sounded off with their thoughts on how the game is too short, and there’s a replayability question as well, though it doesn’t appear the solutions to some of the puzzles are the same every time through. It might actually have been nice to be able to take the person’s body through another day with a similar but slightly different set of challenges and a different end goal. One person even suggested the opportunity to shepherd a female body through the wonders of childbirth, but I’m not certain there are enough old timey mechanical drawings to make that into something I’d want to play. Regardless, while acknowledging that your mileage may vary on the value proposition more than any other part of any game, for the $3, I didn’t find Homo Machina excessively short, and I’ve certainly sunk more than that into IAPs for free games that were much less creative and well made than this one.

Certainly, there should be plenty of room for a sequel, should the developers feel up to one. It could be another day in the same body or a new cast of characters under a completely different person’s skin. Whether that happens or not, Homo Machina is yet the latest example of how even within some pretty narrow constraints in terms of setting and mechanics, it’s possible to craft a pretty excellent world that is both amusing and rewarding. You might even learn something along the way, but kids, please don’t use it as assistance for your upcoming biology test, because something tells me you’re not going to pass it if you do.