People take craft beer seriously. Maybe too seriously. We all know that one guy or girl who swears their home brew is the best, and while they are occasionally correct, it can get a little overbearing. Cooking up your own beer should be fun, because beer. Brew Town (Free), by AppBox Media and I Fight Bears, takes a very Joker-esque, “Why so serious?" approach to creating your own libations, taking you from just one person with a lager and a dream to an outfit big enough to take on the giants of beer.

Brew Town definitely qualifies as a beer-brewing sim, but not one that you’d call particularly hardcore. The overall framework of a simulation is all there, from different buildings spread around your pretty spacious plot of land to the way you can improve the recipes of your various styles of beer. What it doesn’t do is get bogged down in the details, instead sharing some DNA with idle tappers and keeping things simple and fairly light-hearted. Don’t expect to be chasing down recipes and gathering all kinds of ingredients, because everything here starts with just one thing: hops. You can practically see IPA aficionados nodding their heads in agreement right now. 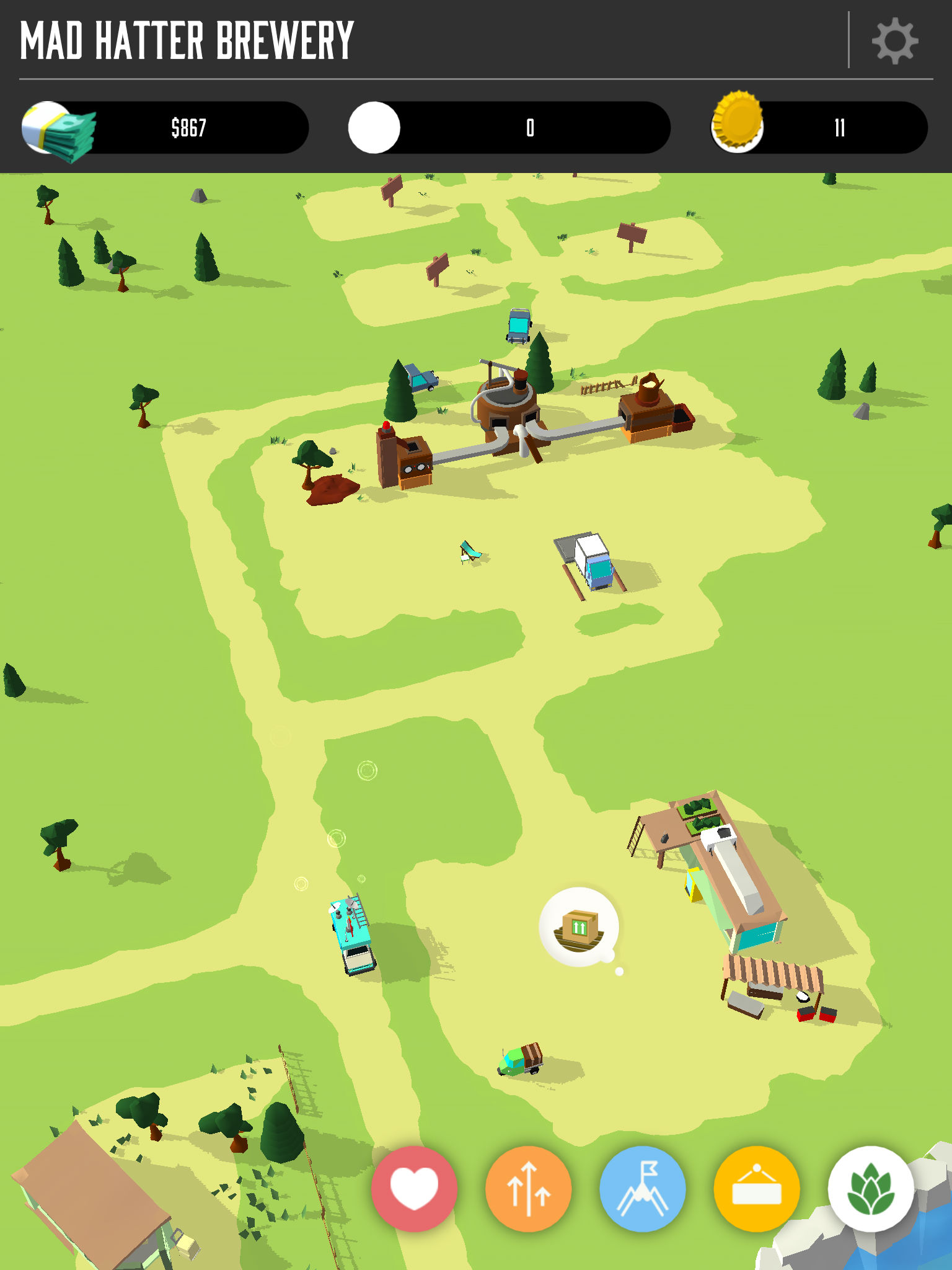 Grown in a field right on your land, hops can be taken to your first brew house to create your first beer, a lager. The short tutorial teaches you how, and it’s really just a matter of tapping a button and waiting for the right amount of time to pass. Maybe a little less complicated than brewing in the real world. Then it’s off to bottling, where your fingers have to do some work as you tap until your whole batch is bottled and ready for thirsty customers.

You can find some of them at your very own bar, which will sell your beer slowly over time so you always have money coming in as long as you keep the stock sufficient. In the meantime, you can brew more beer to fill orders placed by customers, who will pay you set amounts of cash for specified numbers of different varieties of beer. The money you earn can be reinvested in every part of your operation, as you can build more brew houses and upgrade them, your bottling plant, your warehouse and your bar to support ever grander brewing ambitions. Indeed, one of the more pleasant aspects of Brew Town is how everything ramps up logically, so while you’re doing the same things, it inherently gets a little more challenging as you’ve got more to juggle. 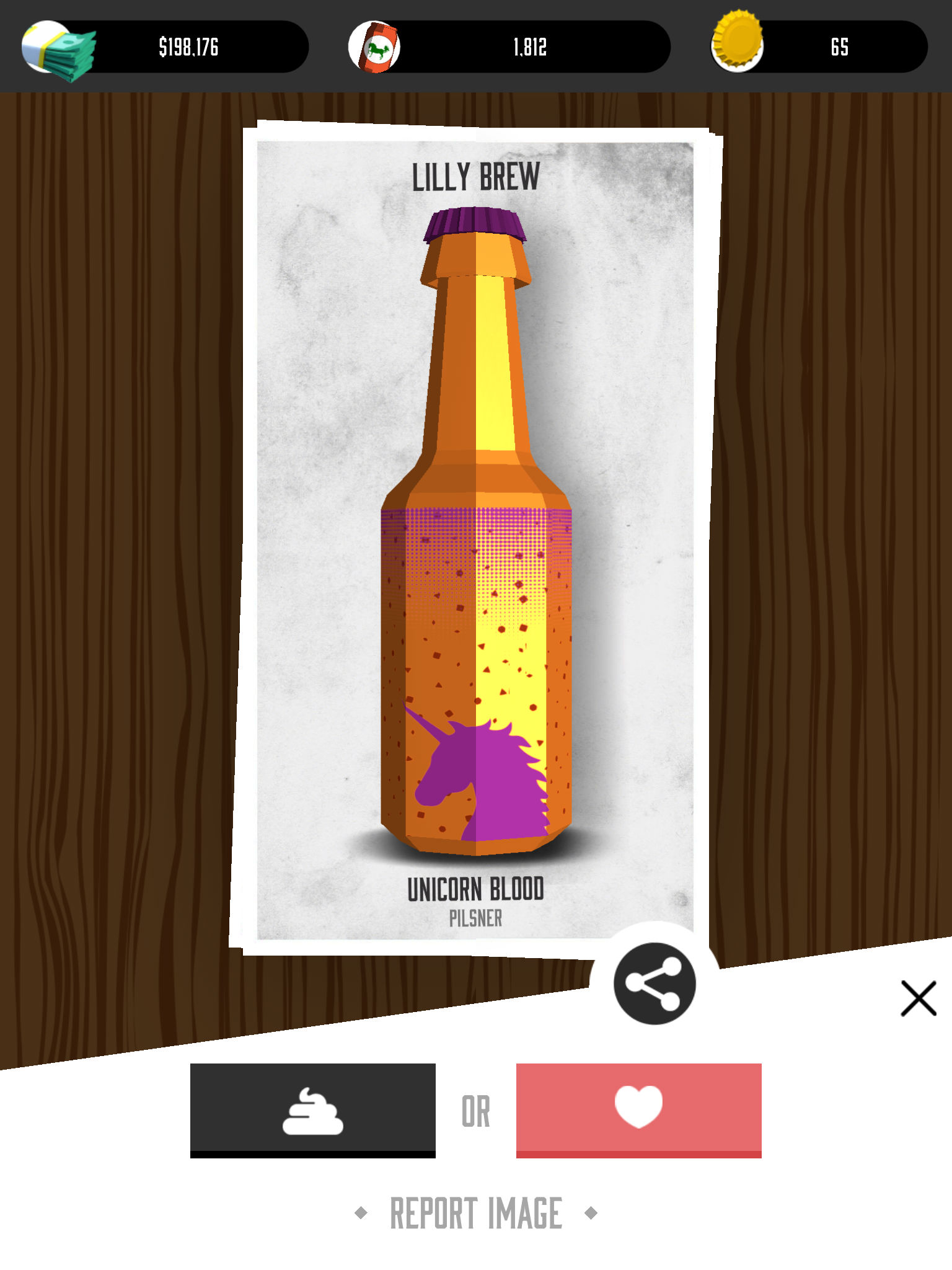 The real magic, though, is back at the Brew Lab, where you are able to research better recipes and unlock more beer styles, eventually giving you a line of eight varieties that ranges from lager to stout. Every time you put money into research, you’re able to pick one or more (once you’ve leveled up the Brew Lab) ingredients to add to make the beer flavor of your dreams. Toasted melon IPA? You can do that if you want, though the actual selections don’t control what makes your beer more profitable and well-renowned. Not a hardcore sim, confirmed.

After a (very) simple mini-game that determines how leveled up your new beer becomes, it’s time to dive into the most unexpected and delightful part of the game. Not only do you get to name your beer, you get to design its entire package, picking the color of its cap and glass (or tab and metal if you’d rather do the can thing) before getting down to work on the label. The label designer is wonderfully rich, offering dozens of color choices and all kinds of shapes, decals and letters that you can re-size, rotate, shrink or enlarge and layer on top of each other. If you’re artistically inclined, you could easily get sucked into just this part of Brew Town for hours, working on making a unique visual identity for every beer in your line.

Putting in that kind of effort can also pay off, as the “Hop or Not" mini-game shows off your bottles to the world and has other players judge them with either a heart or poop emojis. You can play judge as well, and if you’re able to correctly go with the wisdom of the crowd enough times, you can earn more hops to satisfy your brewing needs. Not only is it fun, it’s easy to get inspired in a “oh, I didn’t know the label editor could even do that" sort of way to recharge your creative batteries for the next time you work on your own designs.

All this brewing needs to be subsidized in real world terms somehow, of course, and the game does it by use of a premium currency that is appropriately called caps. These permit you to speed up just about any part of the task chain from research to brewing to bottling, plus buy you a number of permanent upgrades that do things like bottle beer just by holding down the button instead of tapping, increase warehouse capacity, decrease job times and more. Caps can obviously be purchased for real money, but there are numerous ways to earn them during play — one is as simple as tapping on the hot pink limos that drive through your land from time to time — and it’s reasonable to say that Brew Town is on the more relaxed end of the free-to-play monetization curve. 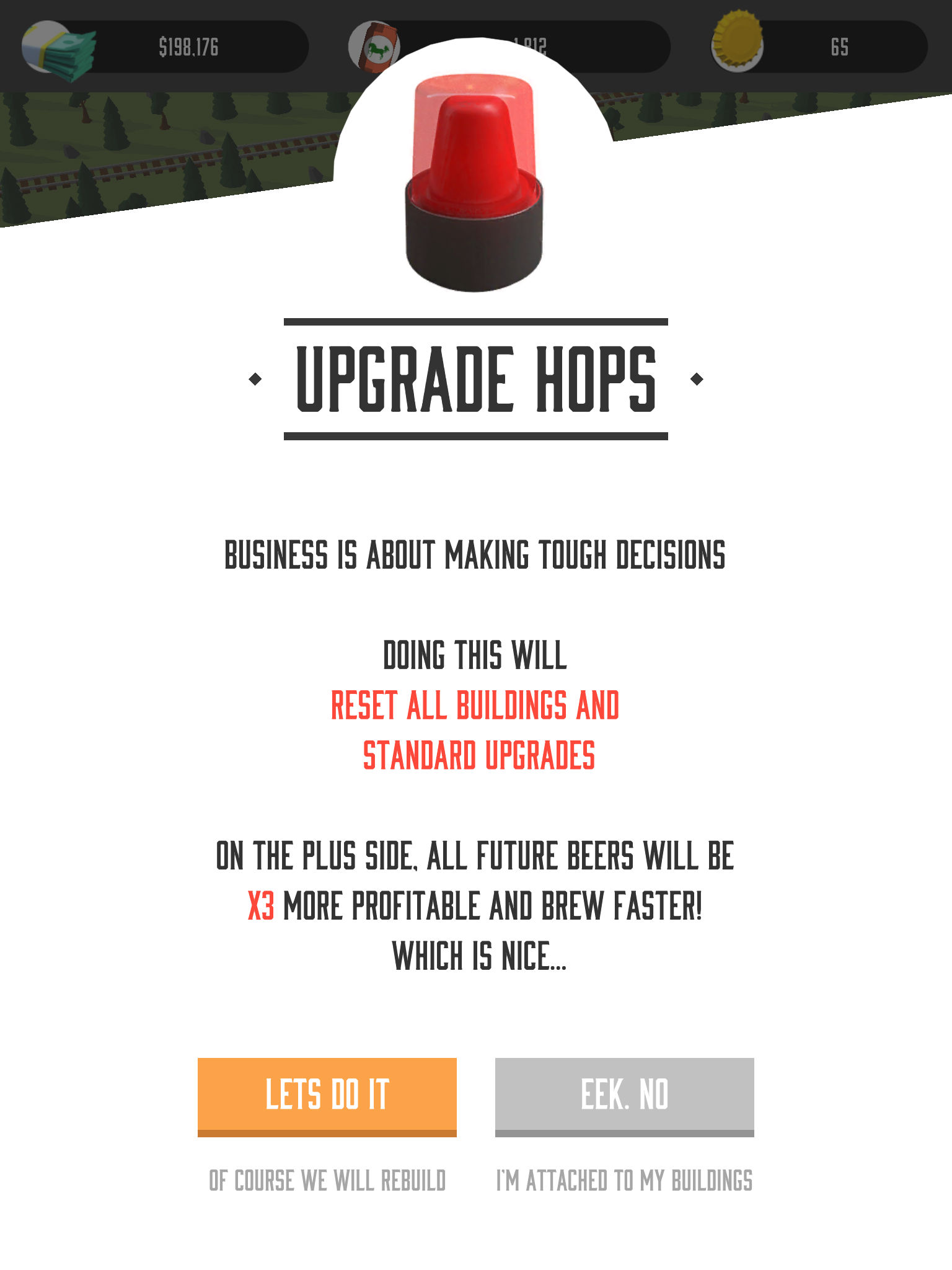 Other upgrades can be bought using the basic in-game cash, but these and your building improvements go away if you decide to make a choice that is very idle tapper: Agreeing to reset everything and build back up in exchange for upgrading your hops. More powerful hops multiply the profitability of all your beers and make them brew faster, so there are definite quality of life considerations when going this route. The big red flashing light and the very detailed explanation of the ramifications of upgrading are very welcome and keep you from being able to complain if you go through with it.

(Well, not keep you, but at least ensure that the way to find the person to blame if you don’t like starting over is to look in the mirror.)

Everything in Brew Town is rendered in a blocky style that will immediately call to mind any number of other mobile games, but it works well because the whole enterprise is focused on not taking itself too seriously. There are lots of cool animations going on all over the place, and it’s easy to get from one part of your brewing empire to another simply by dragging things around. You can also zoom in, though I found it a bit wonky to get close to the exact things I wanted to at times, and there are only two distances, near and far. Still, the details are a cool part of the overall atmosphere: When a customer shows up to place a large order for a big game, that’s because there’s an actual football game being played on a field at the very bottom of your parcel of land. 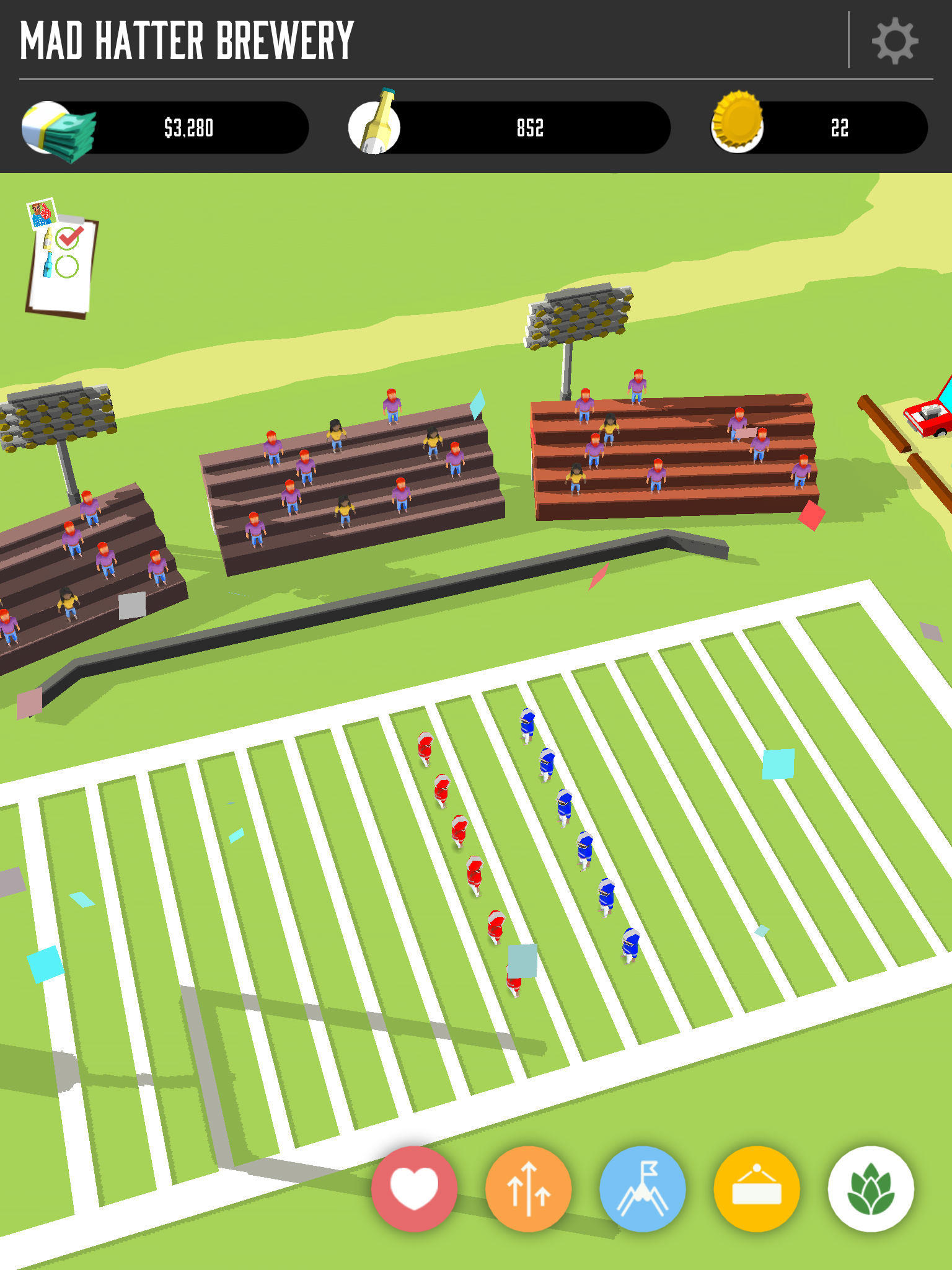 I also encountered some glitches in the pre-release build I played for review, including one time where the game failed to save my can design for my IPA. This wasn’t the tragedy it could have been due to my overwhelming lack of artistic talent, but it’s not hard to imagine another player crushed by putting in like 30 minutes playing with the label-maker and then having that work go up in smoke. This seems like a pretty simple bug to squash, though, and I wouldn’t be surprised if it already has been now that the game has officially been launched.

It says a lot about Brew Town that you don’t even necessarily need to be a beer lover or know your pilsner from your porter to appreciate it, because it’s well-constructed almost the entire way through and manages to blend simple game mechanics, an inviting atmosphere and a dash of artistic creativity to concoct something that all kinds of gamers can get into. It’s definitely a lot more casual in its approach to the idea of brewing your own beer than your preconceptions might have you think, but again, when you think of how people get about craft beer in meatspace, that’s not necessarily a bad thing at all.