Armello (Free) from League of Geeks is a game of options, and figuring out how to deal with your opponents. You and three other opponents take turns in a day-night cycle, all the while the King of Armello is dying from corruption by the Rot. Then, this becomes a game of plotting, intrigue, and even potential alliances in the game’s online multiplayer mode. The fun comes from being devious, and watching as your glorious plan starts to come together. 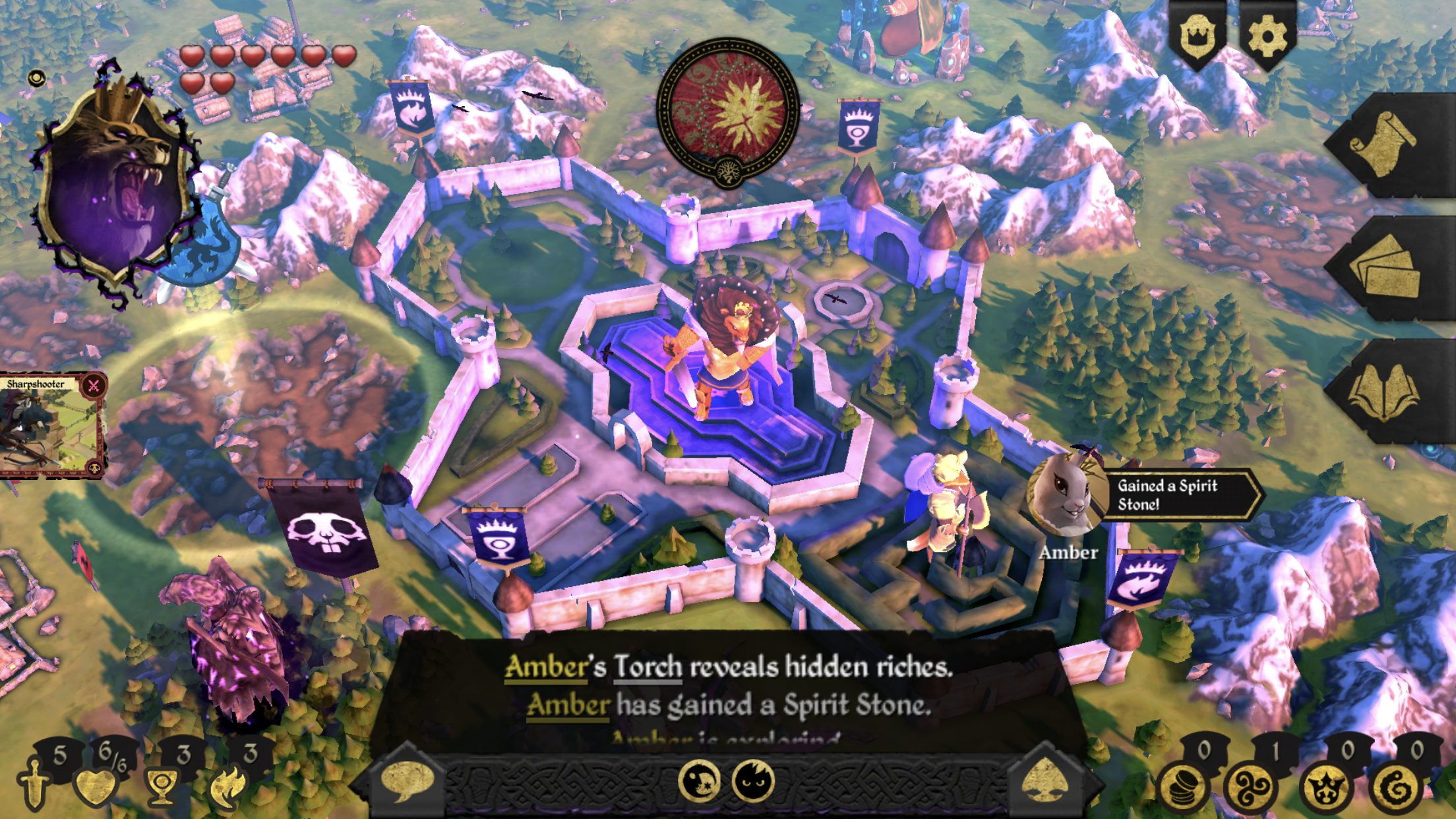 Armello offers several ways to win the game that provide different strategies for playing. Let’s say you decide to go for the prestige victory, which you earn from killing heroes, killing Banes, by completing quests, or through cards. Now, a prestige victory means nothing if somebody kills the king, so you’ll want to make sure nobody goes and does that. Spells and abilities that weaken players, along with making king’s rulings that can also do that or can hinder those storming the castle gates will help out. Ultimately, you’re trying to be the clubhouse leader when someone goes to kill the king, or you make it so that nobody can even try to kill them.

Meanwhile, killing the king comes with its own set of risks. The king is easier to kill when he’s at low health, but making your way into the palace is difficult because of the perils that surround the king’s tile. These perils require matching four symbols, so you need some luck, or a good selection of cards and a high spirit count, in order to even get in the king’s face. And if you clear a palace peril and fail, well, then you might have just opened up the window for someone else. But, this is the easiest way to just ensure that you get the win when you’re ready for it. 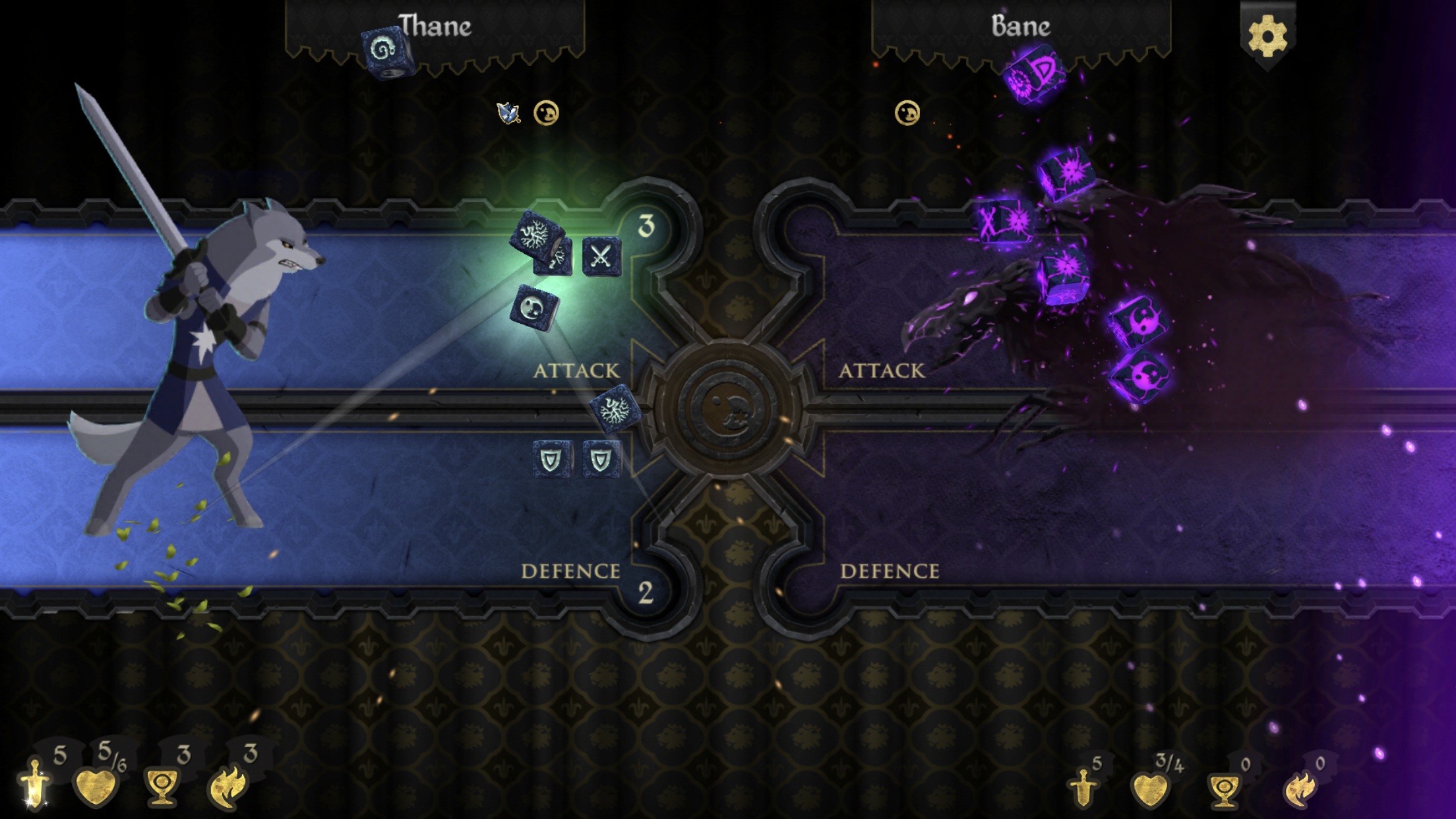 Or you could go for a Spirit Stones victory. You will have to approach the king, but this is an instant win since it purifies the king of his corruption without going into a dice battle. The tricky part is picking up all the Spirit Stones, as they appear randomly on the map, and you might not win them through tests when you complete an objective. Also, when players start to see that you have these stones, they will get concerned. Of course, you could also fake them out, as Spirit Stones can kill a Bane without going into combat, and this becomes an easy way to rack up the Prestige, while leaving opponents on edge as to what you might do.

The Rot victory is the hardest, because it involves killing the king, but also picking up a lot of Rot to corrupt yourself, and then out-corrupting the king. before killing him. However, it winds up being a way to kind of flip the board on opponents, as you don’t get attacked by Banes, but it also can telegraph your victory method. However, if the circumstances present themselves to where you can gain a lot of Rot, it’s worth going for. 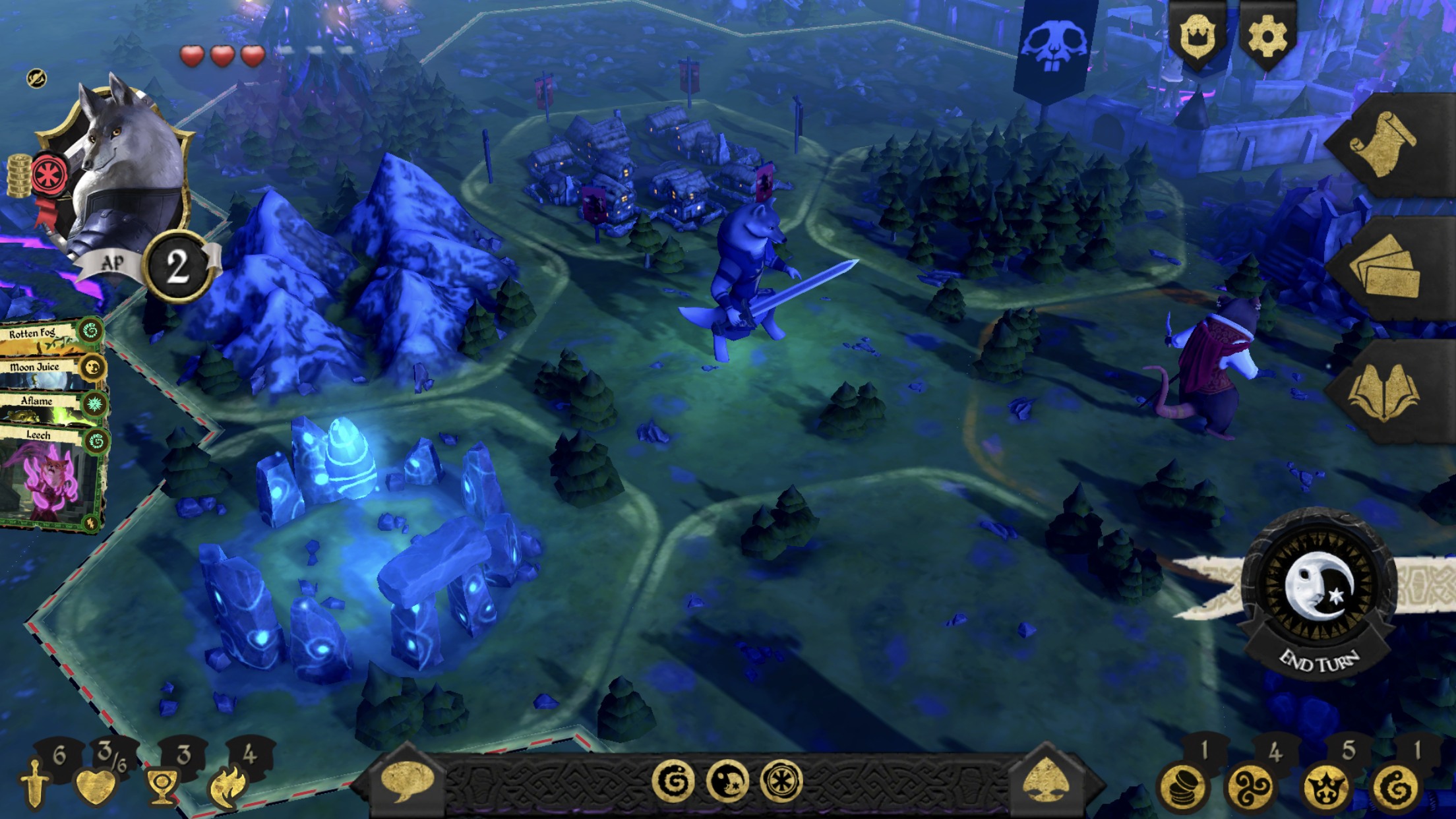 There’s a whole lot of emergent gameplay that arises from Armello‘s randomness and from these different strategies. You can have low-scoring defensive slogs if people keep killing each other, or matches where players ignore each other and go for their own business before only interacting with each other in the most cursory ways. It all comes down to how each player sees the circumstances ahead of them, and wishes to play the game for themselves. There’s a lot to keep track of in Armello, particularly since the stats aren’t always self-explanatory, and there’s a lot of symbols and the day-night system that you have to track. Studying and learning how Armello‘s different systems work is key.

Armello monetizes in a unique way, where you can just unlock everything with a one-time subscription, or pay piecemeal for items with in-game currency. The subscription costs $5.99 per month, $13.99 per 3 months, or $35.99 per year. This unlocks all heroes, skins, the bandit clan, seasonal board skins, all the premium dice, and all the novellas explaining the game’s story. It also comes with a 10% discount on additional chests. 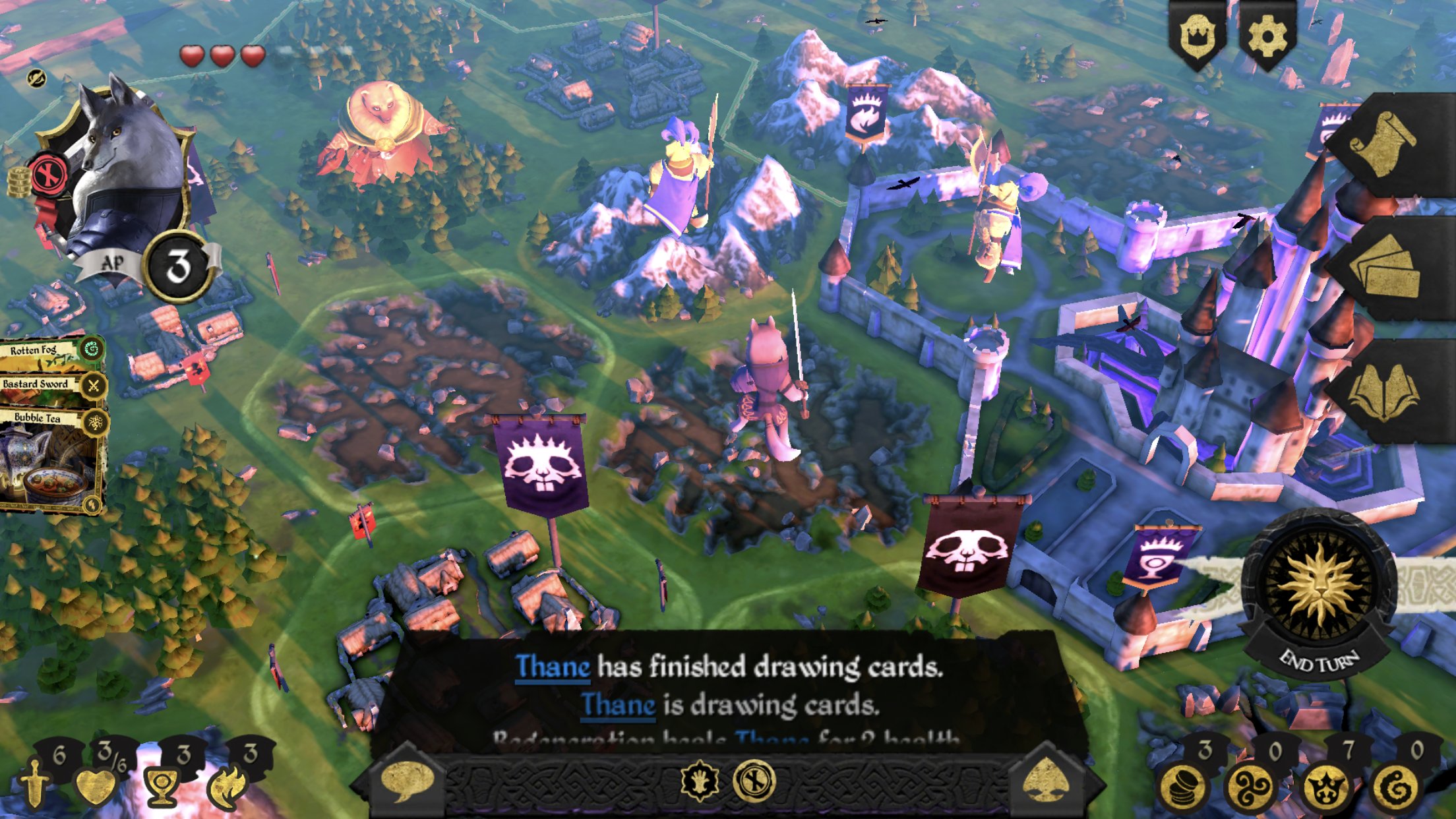 On the one hand, I totally understand why League of Geeks used this model: selling premium games on the App Store is rough. There’s a reason why this appeared on PC first, after all. There’s something that leaves me uncomfortable with paying a subscription for just one game to unlock everything, but that seems irrational. You can just pay for access to the game for as long as you want. I think it’s the idea of paying but losing access to content if you stop paying. Of course, that works for Netflix, I suppose. I wonder if a business model like Fortnite‘s Battle Pass would work, where you can unlock items permanently while ‘subscribed’ would work? Pay for the subscription to keep unlocking new content that gets released over time.

Of course, I can also understand why League of Geeks would want to just go with this model, especially since the studio is so prolific at releasing new content and DLC, this makes more sense for the mobile market. And any complaints about Armello as a business model ignore that the base game is rather generous for a free offering on the App Store. You get just the base characters for free, but can play as many single- or multiplayer games as you want without paying. Items and characters can change your strategy as you unlock them, but you basically get the game, and can play with other people, for absolutely no cost.

The mobile adaptation works well, and you can easily save a singleplayer game and come back to it later. Much like how certain in-game elements aren’t always apparent, the interface is a bit convoluted, especially with navigating the shop and figuring out how things work. I wish there was an undo move button, as I have accidentally moved when I didn’t want to a few times while playing. Also, there’s a weird fog of war that appears when zooming all the way out on the iPad Air 2 that makes getting a wider view of the battlefield difficult. It can be tough to see where every character is on the board, unless they’re hidden by forest.

Armello‘s prologue does help explain many of the elements of the game, and sets up the stories about the four clans in play, but I feel like it holds the player’s hand a bit too much and doesn’t let them learn how the game plays for themselves. Once you get into a game, things become a lot more apparent, though there is still some learning to do.

While the free download nature of Armello makes it easy to say “just go download it, it’s free and you can try it for yourself," I think that it’s good to know that there is a lot of depth and emergent gameplay here if you do decide to sink your teeth in for yourself over time. And this kind of release is a must-have if only because you can go online and play against your friends for free. You might not have all the characters unlocked, but the same core game is available to everyone for free. Armello ain’t perfect, but it’s worth your time to experiment and see if you like it, and then you can spend as much or as little as you want to keep enjoying it.