On the one hand, Dragon Lapis (Free) is a bog-standard Kemco RPG release, the sort they used to boot out the door on a near-monthly basis. The only novel thing here is that the game is played in the portrait orientation rather than landscape, a change that makes it resemble Square Enix’s iOS Dragon Quest games in what I’m sure is a total coincidence. On the other hand, Kemco hasn’t been booting these kinds of games out the door on mobile quite as often as they used to. No one really is, if we’re being honest. If nothing else, that makes Dragon Lapis slightly more welcome than it might have been had it dropped in the middle of Kemco’s more prolific past. 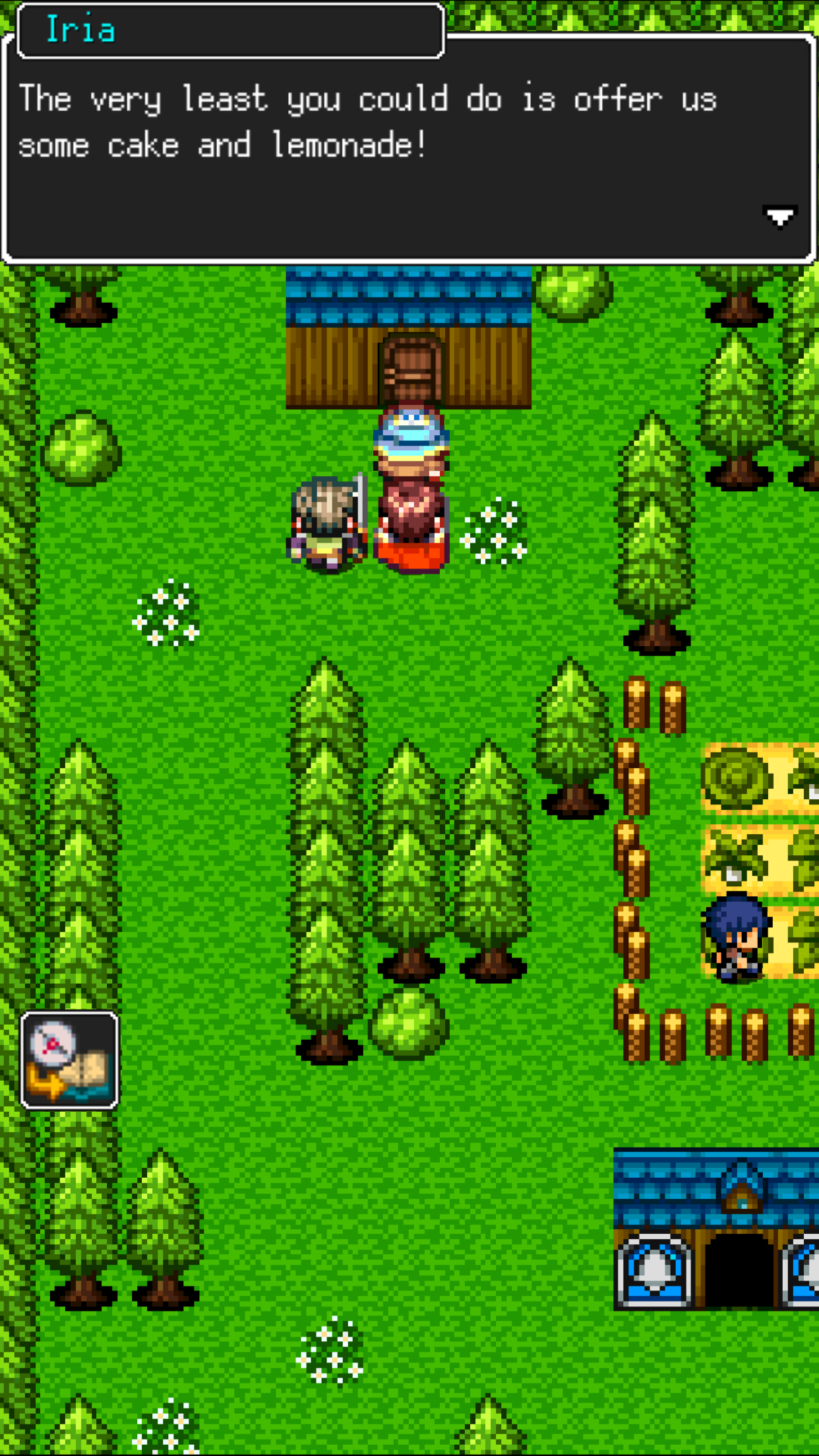 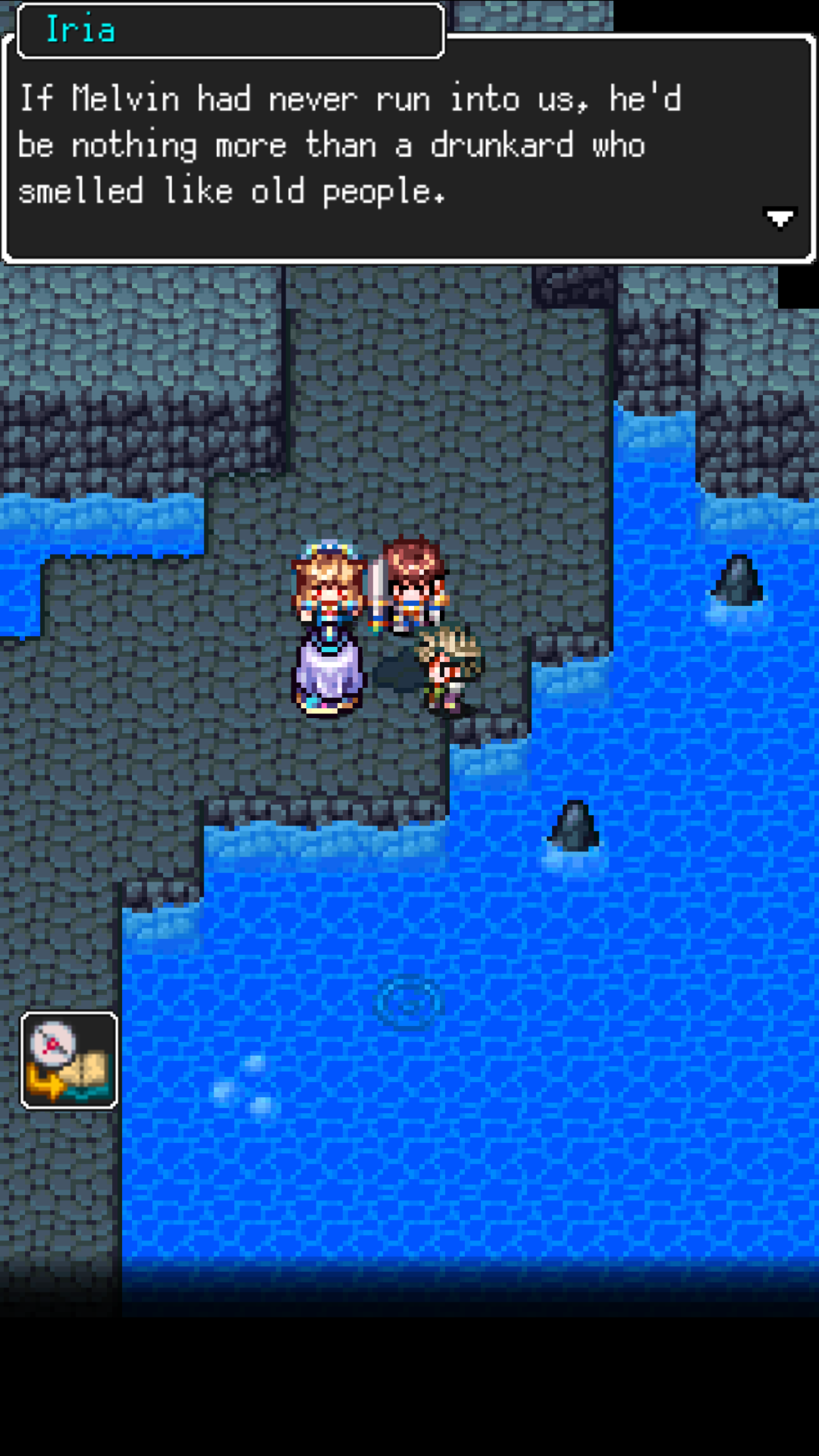 This one comes to us by way of EXE-Create, seemingly the only developer left from Kemco’s hay days that still has any desire to create games like these. The plot is trope-heavy, both in terms of general JRPG tropes and EXE-Create’s usual efforts. In ancient times, two dragons battled each other in a terrible conflict that nearly tore the world apart. The two were sealed by a now-legendary hero, and the world went on in peace. Recent events have unsealed the dragons, however, and it’s up the descendants of that legendary hero to either break the world or save it. You’ll be playing the latter role, of course. As it turns out, one of the dragons was hiding in the humble hamlet the main character was defending, and when the other dragon comes knocking she is forced to reveal herself. 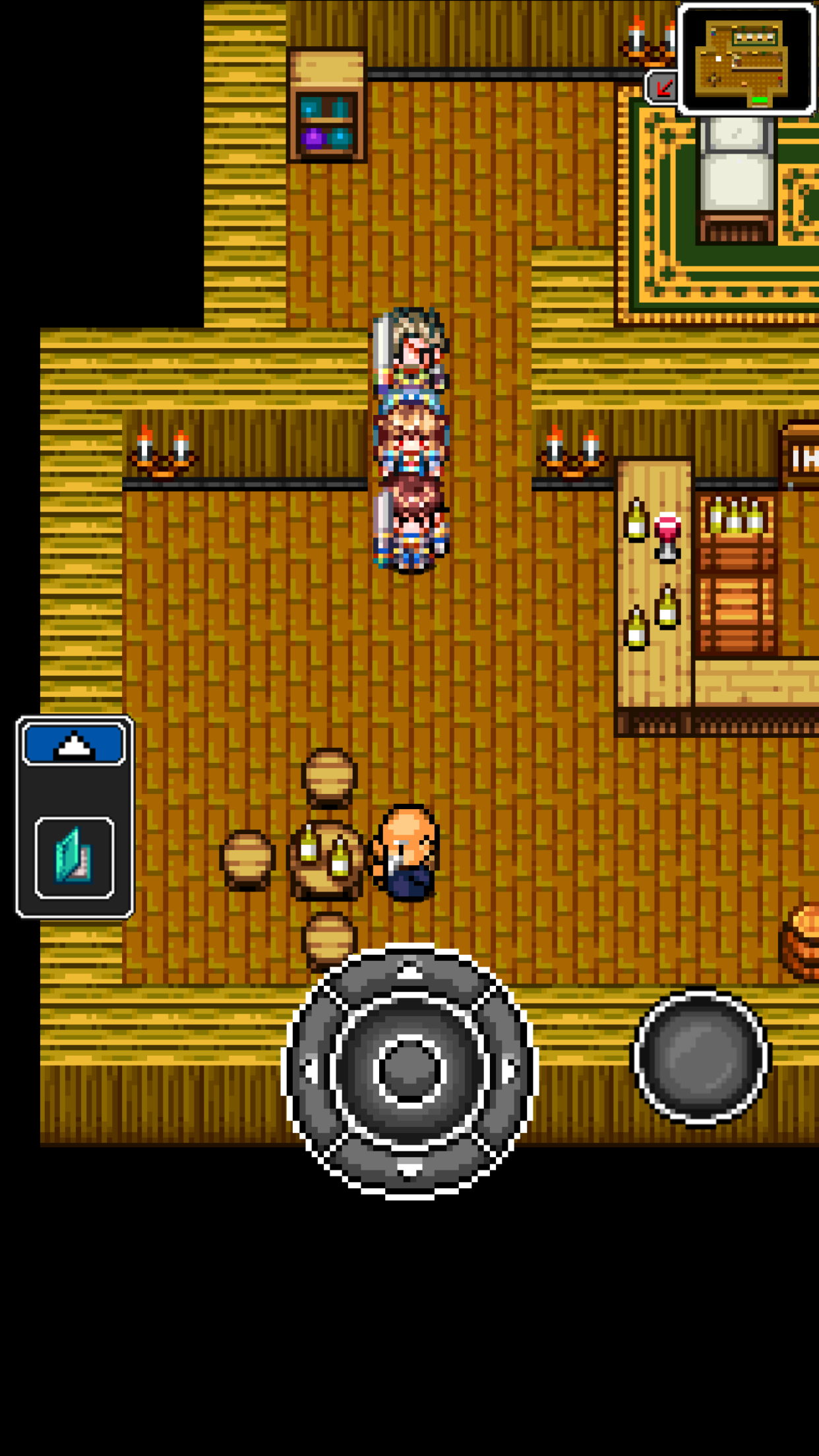 For one of the most powerful beings in existence, she doesn’t seem that bad. More mischievous than anything. She talks a big show about her frightful powers and god-like status, but she can’t really back it up for most of the game. In order for the dragons to gain their full power, they need to gather up special gems called Dragon Lapis that are sealed in goddess statues around the world. Due to the nature of the seal, the dragons can’t use their powers unless they are near a descendant of the legendary hero, which explains how you get dragged along on this business. You’re joined by a down-on-his-luck mercenary and a young witch who has trouble asserting herself. We’ve seen all of these types of characters in EXE-Create’s RPGs before, and they speak with similar voices to those party members of the past.

The gameplay is the typical stuff in broad strokes. You travel from town to town solving problems that generally involve marching out to a dungeon and killing some sort of big boss. Beating monsters gets you experience points and money, both of which can be used to make your characters stronger. The former increases your level, improving your stats and giving you some valuable EP to spend on your job skills. The latter can be spent in towns to buy items and new gear. I probably don’t need to explain all of this, but if Kemco is allowed to repeat as much as they do, I can surely get away with it as well. The battle system is the usual turn-based affair that EXE-Create uses in most of their games, right down to the speed-based turn order meter hanging out at the top of the screen. 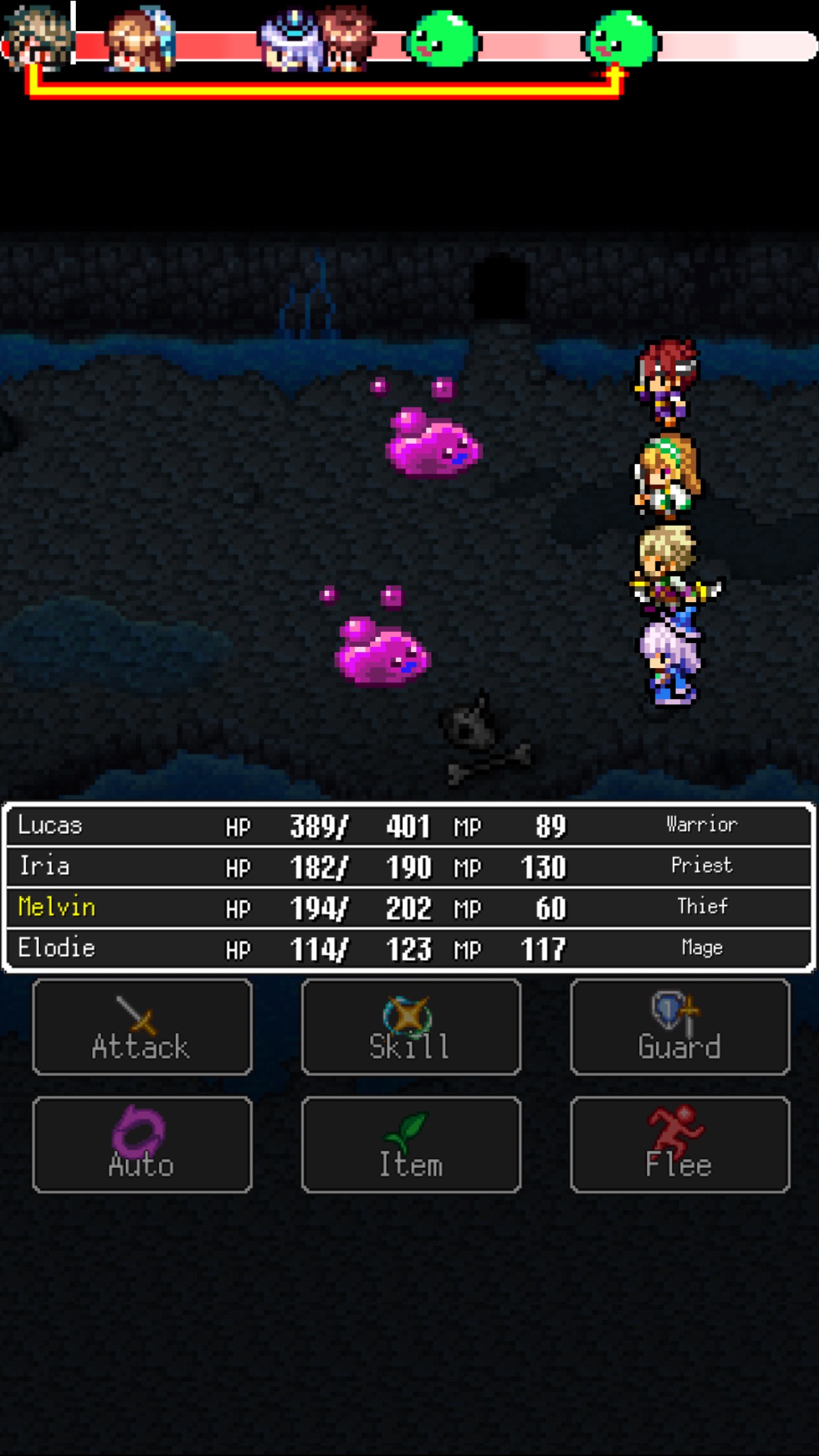 Character growth works a little differently in this one compared to some of the developer’s other games. Many of your stat gains will come through special items called Growth Plates. These are small multi-node plates that are often connected with a particular job or weapon. Each node will unlock a stat gain, new ability, or rank-up in a job. When you finish the plate, you’ll get an extra bonus for completion. Many of these abilities are fixed to certain jobs, but once you’ve unlocked a job you can switch to it freely whenever you’d like. There are a few jobs that are exclusive to particular characters, but for the most part you’re free to make the hero a priest and the witch a warrior if that’s your druthers. Besides affecting your stats and which learned abilities you have access to, your job also determines what equipment you can use.

The Growth Plates can be found in chests or among drops from enemies. They’re relatively easy to come across, particularly the ones that grow the basic classes. The EP to unlock the nodes, on the other hand, is a bit more limited. You’ll get some when you level up, complete combat challenges the game randomly throws at you, or by using a fairly uncommon item. You can buy those items using premium points that are slowly earned through combat or bought with real money through the game’s IAP shop. If you don’t resort to buying those items, you’re almost certainly going to have tons of plates you can’t make use of. It’s not a problem for general progress, but if you’re the sort that gets bothered by having resources you can’t use, you’re probably going to be really irritated with it. 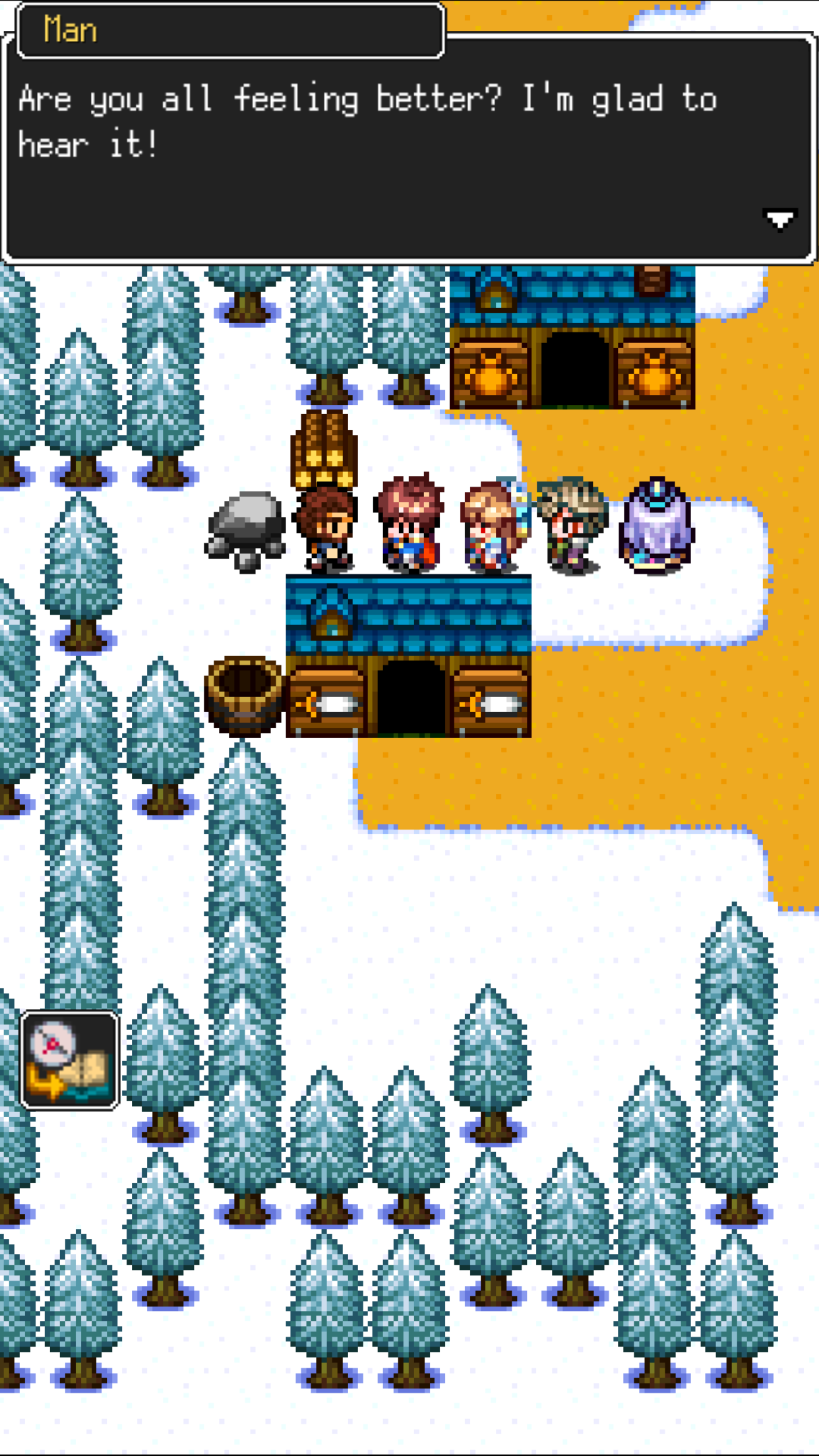 The IAP shop also sells the usual assortment of cheat items, and EXE-Create has also included their usual lottery system that gives you a chance to get some cool weapons, items, and accessories using free tickets or premium points. The EP items are included in the free lottery, and those tickets will sporadically drop from enemies, so there is at least a path to earning EP indefinitely so long as you are very patient. The shop also sells keys that are required to open certain treasure room doors. I didn’t find any other way to get those keys in the game, but the treasure doesn’t include anything terribly important and the keys are cheap enough to buy now and then with your earned premium points. Again, it’s annoying but doesn’t really affect your progress through the main story.

In terms of presentation, Dragon Lapis follows the faux-retro style that EXE-Create introduced in Dragon Sinker, and even re-uses some of the enemy sprites from that game. With the novelty gone and the way the style breaks from the period it appears to be emulating in many ways, it ends up feeling like EXE-Create just didn’t want to bother with high-res sprites and character portraits. It certainly doesn’t feel like an 8-bit or 16-bit game in most respects. Still, I suppose it does the job well enough even if it isn’t particularly exceptional or remarkable. One nice touch is that as you advance your job classes, your character’s appearance changes in battle. That’s a little extra bit of effort that we don’t always see put into games with job systems. It’s no Final Fantasy 5, but it’s still appreciated.

I also welcome the portrait orientation for whatever reason it was used. There aren’t enough JRPGs on iOS that let you play this way, so I’m always happy to see one that does. The various options for virtual buttons don’t quite hit the spot the way the Dragon Quest games from Square Enix do, but the options are at least there. Speaking of options, you can also buy this game in a premium or free form. The premium version takes out the in-game ads that you’ll see in the free version and gives you a chunk of premium points to start with. In all other respects, the two apps are identical. If you can put up with the ads and don’t care about the cheat items, you can play Dragon Lapis start to finish without paying a dime.

Ultimately, this is a dance we’ve seen many times from Kemco and EXE-Create. You probably know what to expect from this pairing by now if you’ve been paying attention to the iOS JRPG scene at all, and perhaps don’t really even need a review to know if you want to play the game or not. That being said, there aren’t a lot of traditional single-player JRPGs being released on the App Store anymore, and while this one had the misfortune to drop on the same day as Final Fantasy 15 Pocket Edition, that doesn’t necessarily mean that hungry mobile JRPG fans should ignore it. Dragon Lapis is a solid enough game that probably won’t stick in your brain for very long but will at least keep you entertained for 20 hours or so.