Developer 111% has been buttering their bread the last couple of years with their TAN series of games. They’re simple games, many of them variants on the classic Atari game Breakout, with the most popular of the bunch being BBTAN by 111% (Free). That game generally followed the Breakout formula, swapping out the familiar paddle at the bottom of the screen with a character who launches balls using a slingshot mechanism. It’s a concept 111% has returned to once before with BBTAN: 7 YEARS (Free), and now they’re back to it again with a sequel named BBTAN2 by 222% (Free).

The first game was an endless score affair, with each toss causing the overhead blocks to drop by one level. When they reached the bottom, it was game over. The goal was simply to last as long as you could to get a high score. BBTAN2 opts for a stage-based set-up, with just over 300 stages available at launch. Your goal in each stage is now to rescue the caged kids that are found among the familiar numbered blocks. Functionally, they work just like any other block, with a number indicating how many times you need to hit them to remove them from the field. Once you’ve freed all the kids in a level, your score is tallied and you are awarded with one of three medals. Some levels give you a limited number of shots to achieve your goal in, while others bring back the collapsing ceiling from the first game. 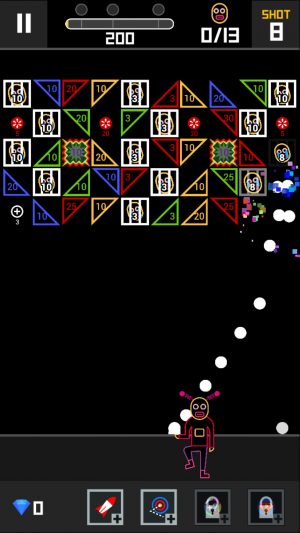 Those aren’t the only changes from the original game, however. Most of 111%’s games follow a monetization model of being free with ad support. You can usually buy an IAP to remove the ads. BBTAN2 takes a different route, adopting a King style system of power-ups, stamina hearts, and extra moves that can all be bought using a premium currency. On top of that, the game is also ad-supported, with ever-present banner ads at the bottom of the screen and the occasional brief pop-up ad between levels. There’s no specific IAP to remove the ads this time around, either. Just like in King’s games, failing a level will cost you a stamina heart. If you run out, you’ll have to either wait out a timer or use some premium currency to top your hearts off.

The new power-ups come in two different basic types. One type once again calls King’s games to mind, allowing you to pay premium currency for one-time use items that you can use at the stage selection screen whenever you’d like. The other can be earned within certain levels by destroying a set number of blocks of a particular color. Of course, you can skip that step by paying to top off your special meter. It’s very courteous that way. These do things like add an explosive effect to your shots or cause a laser to flash across entire rows or columns on impact. These power-ups are also sometimes placed within the levels themselves, giving some of the levels a puzzle-like vibe where you have to use the placed power-ups to clear the road more quickly. 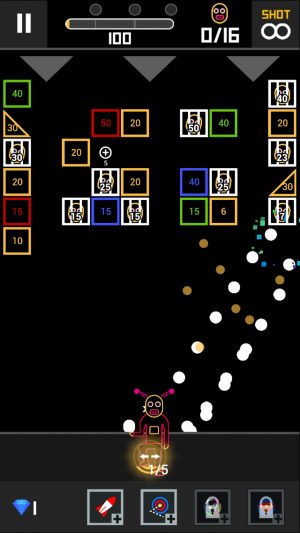 The visuals will be familiar to anyone who has played any of the TAN games before. They’re simple, garish, and oddly charming. Typically, the TAN games have some decent tunes playing in the background, but this one is oddly silent outside of its sound effects. BBTAN2 has some achievements built in that offer rewards now and then, and there’s also a login bonus you can collect each day. Outside of those, the game is a bit stingy with its premium goodies. That said, while there are a few levels where you really do need a power-up to win, the game always provides a freebie in such cases. These are generally the levels where said power-ups are first unlocked.

The difficulty curve is surprisingly not as steep as you might expect given the game’s new monetization methods. I was nearly 100 stages deep into it before I ran into any level that took more than one try. It helps that, unlike many other puzzle games that are set up like this, there aren’t really any random elements to BBTAN2. The game couldn’t cheat you even if it wanted to. So while the various sales pitches and ads feel a little bit too much at times, it never feels like the game is designed in such a way as to push you into spending more. Furthermore, the game doesn’t need to have internet access to play.

BBTAN2 has a simple, enjoyable quality to it that makes it hard to put down. Its level-based approach helps separate it from its predecessors, though it doesn’t venture too far from the core mechanics of previous BBTAN games. The changes to the pay model are a slight bummer, but in practice the game doesn’t play out terribly differently from the other ad-supported games from 111%. If you enjoyed any of the previous releases from this developer, you’ll probably want to give this one a try, too. If you haven’t played any of their prior works, I’m not sure if this is the best place to start, but it’s not a bad place, either.