Around two and a half years ago, Sonic Team released their first (and thus far only) mobile game. Sonic Runners finally brought the famous hedgehog to a gameplay style that should have fit like a glove. It was a side-scrolling auto-runner packed with rings to grab, characters to collect, and more nods to SEGA history than you could shake a ceramic knife at. Unfortunately, it was also packed with free-to-play shenanigans galore, using virtually every trick in the book to try to monetize. At its core, the game was fun, with interesting level designs and fairly solid gameplay. That clearly wasn’t enough, however, as SEGA ended up pulling the plug on the game less than a year after its debut.

That’s the business, but it was a shame to see the decent work Sonic Team had done on the game go to waste. I guess I wasn’t the only one that felt that way, because Gameloft has picked up some of the pieces of Sonic Runners to create Sonic Runners Adventure ($2.99). It’s a curious release in more ways than one. First, the simple fact that Gameloft is publishing a Sonic game, never mind one that Sonic Team themselves had a hand in. Second, that Gameloft is publishing a premium game without any IAP hooks whatsoever. The company has completely moved away from games with this sort of model in the last couple of years. There’s also the fact this is yet another premium game built from the scraps of a failed free-to-play release. Following on Final Fantasy Dimensions 2, is it safe to call this a trend? Whatever the case, this is pretty much just what many a TouchArcade reader was asking for in the wake of the original Sonic Runners release. 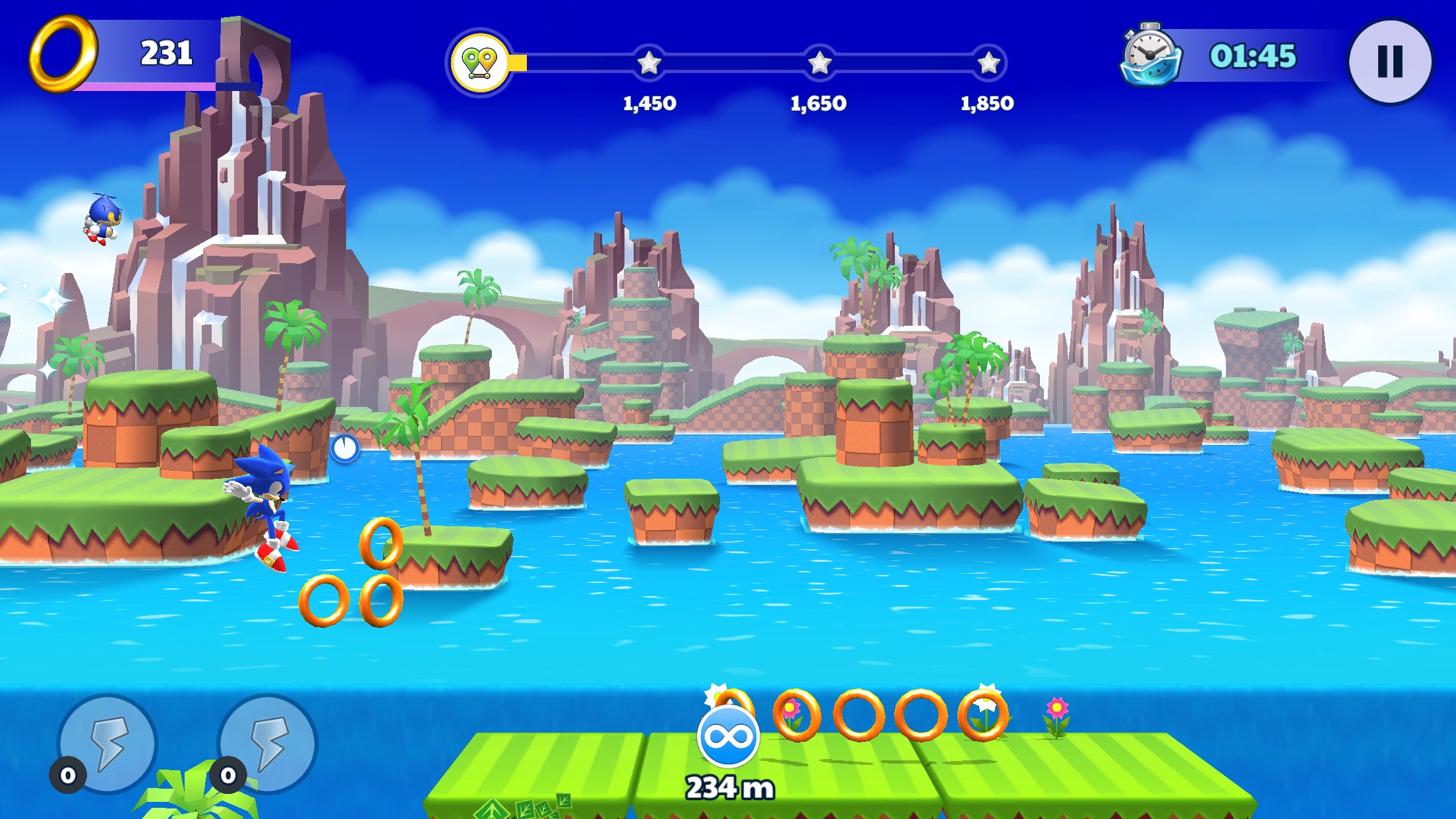 That said, it’s a little harder to see the original game peeking through here compared to the Final Fantasy case. The core gameplay is identical, sure. The graphical and audio assets are the same as well. It’s been a minute since I’ve played the original Runners, but I’m pretty sure the level designs are pulled from there too, at least in part. But in most other respects, this is a fairly different game. You’ll work your way through a number of levels spread across four different zones, each with their own set of three goals that you’re meant to shoot for as you play. Some of those levels have a finite goal that you’ll reach after running a certain distance. Others let you loop around endlessly until you’ve achieved your goals or the timer has run out. There are also levels that are finite but allow you to take more than one lap around the course, with the added condition that any rings you grabbed on previous laps will not be replenished. Each zone caps off with a boss battle against Dr. Eggman.

The game includes nine different playable characters, following the team formations of Sonic Heroes. Each of the three teams includes one Speed character, one Flying character, and one Power character. For example, the main team consists of Sonic, Tails, and Knuckles. All of the characters of each type handle identically to one another, with Speed characters like Sonic and Shadow able to triple jump, Flying characters like Tails and Charmy able to fly for short periods of time, and Power characters like Knuckles and Vector able to charge forward in mid-air and smash walls. The only difference between them comes down to their team ability, a skill that will kick in temporarily and give you some minor benefits. Levels are typically built for a certain type of character, though you’re free to use whoever you’d like. 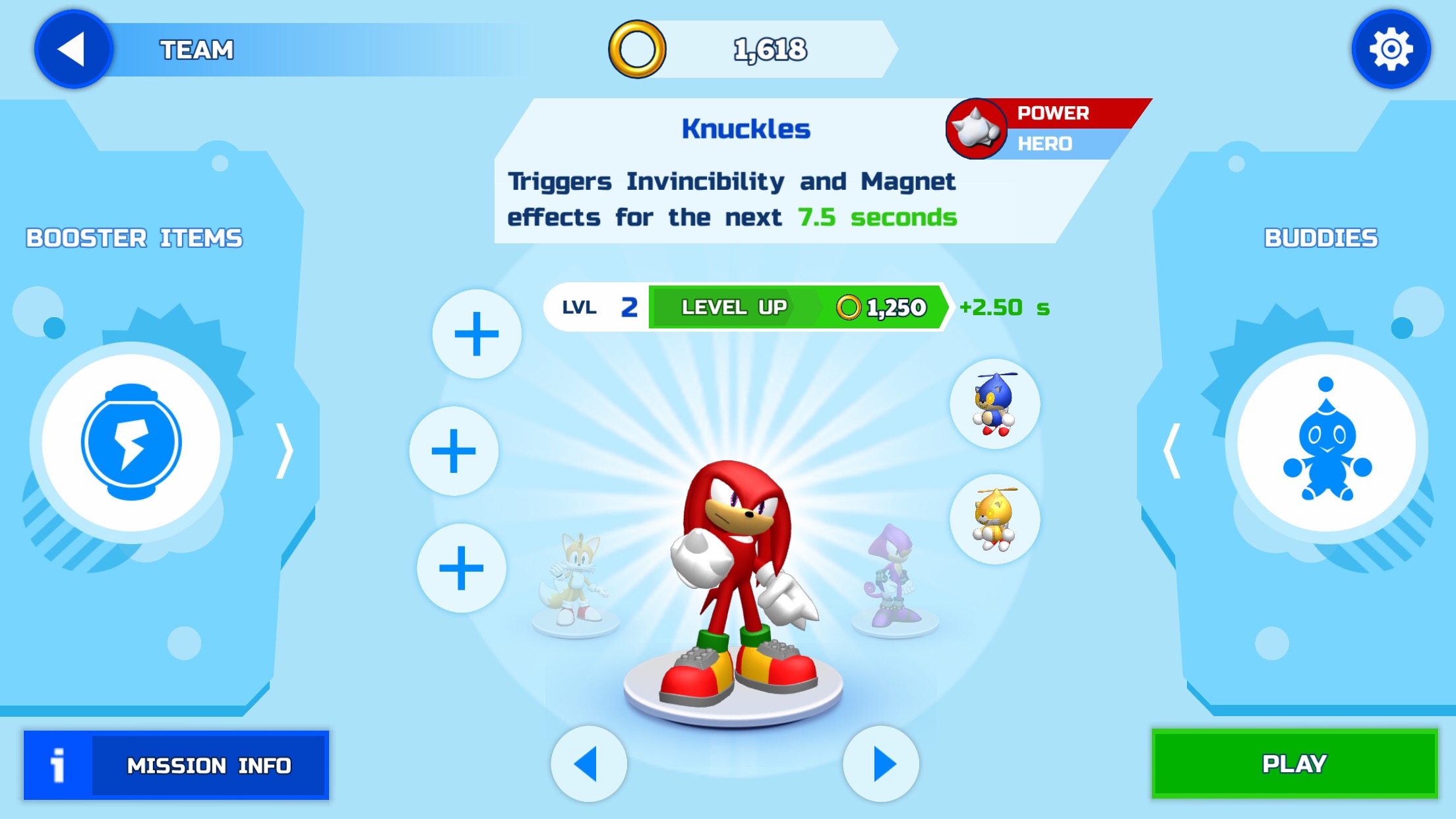 At the start of the game, you’ll only have access to Sonic. You can buy the other Speed characters if you have enough rings saved up, but the other character types are locked until you clear certain zones. Some of the level goals require you to use a particular character, so there’s some incentive to return to previous stages if you haven’t unlocked the appropriate member the first time you play them. You may want to go back to some stages anyway, as rings are used to pay for many things in the game. You’ll certainly run short if you try to get everything as it’s made available. There are permanent upgrades like new characters, new Chaos (who grant additional bonuses when equipped), and character level-ups that increase the effectiveness of team abilities. There are also some one-time use ways to spend rings, such as boosts and continues. The latter becomes especially important later in the game as the level designs become particularly nasty.

The levels are reasonably tall, allowing for at least two different routes on each layout. As ever with Sonic, the high road can a little harder to keep along with, but offers better rewards. While there aren’t any secrets to search for, most stages will contain an icon you can collect that lets you play a bonus stage where you can scoop up a few hundred rings without worry. The first two zones are pretty gentle with their arrangements of enemies and traps, while the last two can be fairly tricky to navigate while still completing your goals of killing a certain number of enemies or grabbing a set amount of rings. You don’t need to beat every goal to move on to the next level, but you do have to finish at least one. Moving on to the next zone requires a particular amount of stars from completed goals, and there are extra levels on each map that are locked until you’ve earned the appropriate amount of stars, as well. 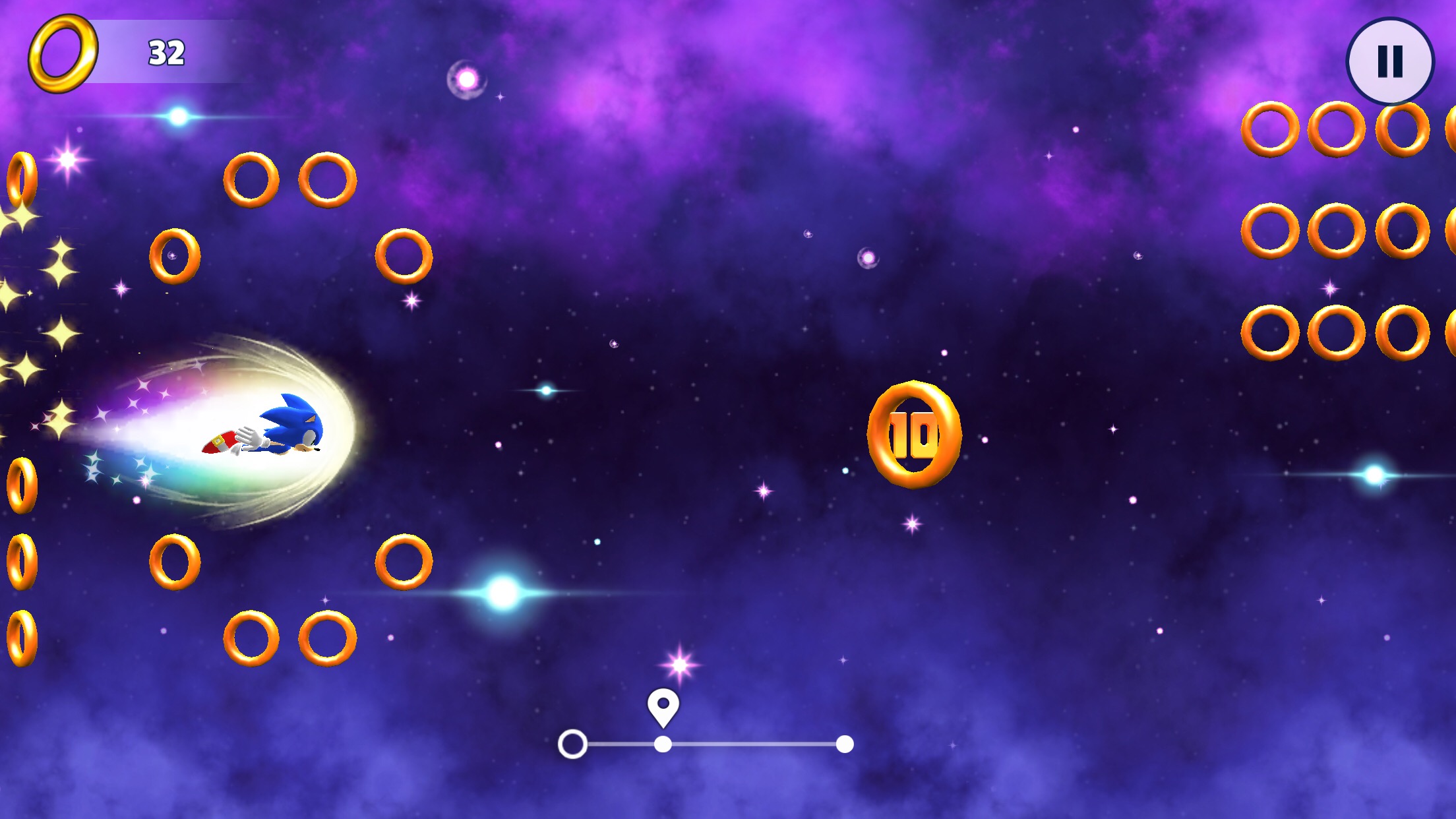 Sonic Runners Adventure is on the whole a much more enjoyable game than Sonic Runners was, but it’s also missing a lot of neat content from that game. Perhaps Gameloft will update the game in the future with extra content, though I suspect SEGA may not have wanted to hand over the keys to the non-Sonic stuff in whatever deal they made. I suppose time will tell there. Still, while it’s a better game by a good measure, you can spot the vestiges of its roots at times. As we saw with Final Fantasy Dimensions, the difficulty is all over the place here. It’s typically too easy, since most of the difficulty hooks in the original game came from starving players of resources which are bountiful here. Every once in a while the game will become much more difficult, a clear leftover from level designs originally meant to have players jamming the button to view ads or spend premium currency to continue. It’s nothing you won’t be able to get over with a few boosts and some practice, but there are definitely moments where it’s clear this is a four-legged animal trying to walk on its hind legs.

It does a reasonable job of that most of the time, however. For just a few bucks, you get several hours of fun auto-running platforming that looks and feels like a Sonic game of this sort should. The difficulty curve could certainly use a little straightening out in places, but it’s still quite engaging even when it’s too easy, and not insurmountable when it’s too hard. Overall, Sonic Runners Adventure is an easy game to recommend to Sonic fans and those who enjoy auto-runners. Past that, it’s going to depend on how much you appreciate a slick presentation over tight level designs. If nothing else, it’s the best original Sonic game on mobile. That’s got to be worth a golden onion ring or two.