I Am The Hero

It feels like whenever there’s an especially busy week with a ton of great releases, and I’m struggling to nail down which game I want to make Game of the Week, something crazy comes from out of left field and makes my mind up for me. This week that game is I Am The Hero ($1.99) from developer Crazyant, and although I’d never even heard of this game before it’s actually been available on Steam since January and comes with Very Positive reviews over there. After popping up on the App Store without warning this week, I can definitely see why. 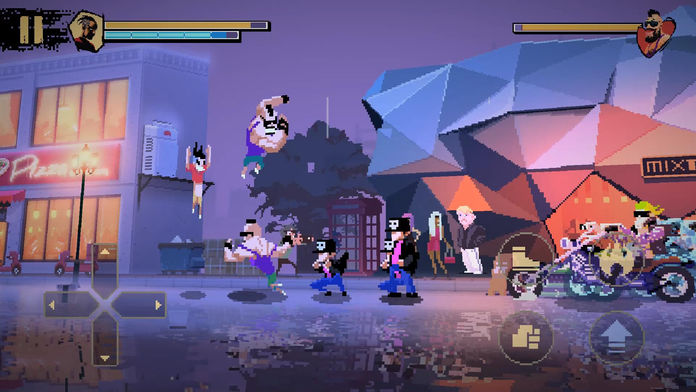 I Am The Hero is a side-scrolling beat ’em up with a heavy emphasis on over-the-top combat, not unlike our previous Game of the Week winner ICEY. You play as the titular hero who supposedly has done some incredible things in his time but his actual past is shrouded in mystery. Your job is to trail a gang of well-dressed bad dudes and beat the living snot out of them until you can get to the bottom of whatever their scheme may be. Or, perhaps there’s more to it than that? Maybe you aren’t the hero you yourself think you are? The story so far is quite intriguing.

More intriguing though is the excellent combat. You have your standard punch and kick, a fireball attack, and the ability to jump and double jump. In a brilliant bit of design you can augment your basic attacks simply by swiping in any direction on their virtual button. So, for example, tapping the punch button does a basic straight punch, but swiping up on the punch button will launch your enemy into the air. Or swiping down will pound them into the ground. Same goes for the kick button. Even though it’s a completely different type of game, it reminds me of the great control scheme in Tennis Champs Returns.

You’ll use these offensive abilities to pull off some of the craziest combos I’ve ever seen. You can launch enemies in the air and air juggle them for quite some time, even RE-launching them from mid-air to keep a combo going. It is totally bananas and oh so much fun. You can combine your attacks in so many different ways, injecting strikes or jumps into the mix, and I can’t think of a game that does such a good job at making you feel like a complete bad ass as I Am The Hero does. It feels like there’s no limit to the types of crazy combos you can come up with.

There is so much stuff I’m not even touching on either, like your variety of cool special moves, or the ability to unlock a new EX move OR a new character after beating a level, or the absolutely gorgeous pixel art that includes tons of fancy effects like real-time reflections and cool lighting. There’s just so much good stuff here but I’ve got to draw the line somewhere. The important thing to know is I Am The Hero has knocked my socks clean off, and for the premium no IAP price of two bucks it should definitely be on your radar for some weekend brawling. Don’t forget to chit chat about how awesome this game is with other players in our forums.