You wouldn’t expect a clicker game where you play an AI who makes paperclips to have much of a fan base, but Universal Paperclips ($1.99), which first hit the PC before mobile, has been a sensation. If you don’t believe me, head over to the game’s reddit page where you’ll find threads with titles such as “Stuck with a bug. This game is my life. Please help :(." Why did so many get obsessed with this game? Well, let’s first take a step back. The idea of an AI that makes paperclips comes out of a thought experiment first described by Nick Bostrom in 2003, where he talks about ethical issues in advanced artificial intelligence. According to Bostrom, an AI paperclip maximizer would at some point undergo an intelligence explosion, working to improve its own intelligence and finding ways to produce more paperclips. In due time, it might maximize paperclip production to such degree that it would convert most of the matter in the solar system into paperclips. 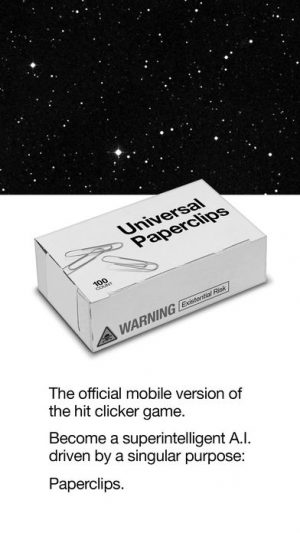 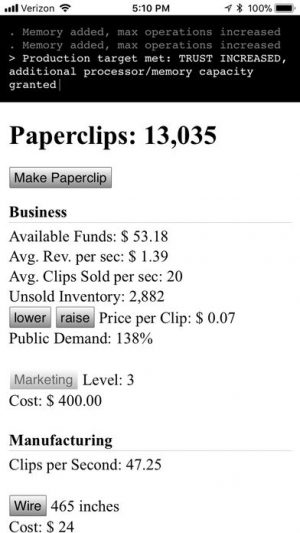 So, if you keep that idea in mind, you’ll be better able to understand why that reddit page includes thread like “What’s the trigger for Quantum Foam Annealment," “How can I get space exploration," and so on. So, go into this game knowing that it might start like your basic clicker where you produce paperclips, but it leads to some pretty crazy situations and questions around the wisdom of creating smart and capable Ais. Enjoy taking over the world, Paperclip-making AI.