I have to give SEGA some credit. One of the many points where I felt that the initial line-up of SEGA Forever titles was lacking was in the selection; they were all games drawn from SEGA’s 16-bit platform, and only two of the games were new to iOS gamers. Subsequent releases have mostly stuck to Genesis games, plus a few updated versions of prior SEGA iOS releases. But the Genesis games in particular that have been selected are certainly eclectic choices that demonstrate an affection for the deeper cuts from SEGA’s 16-bit library, and that’s pretty cool. It reassures me that in spite of the numerous issues that have plagued SEGA Forever, the project is a work of passion. Because honestly, who else but a SEGA super-fan would choose to release something like ESWAT: City Under Siege (Free) ahead of better-known titles like Streets of Rage 2 or Gunstar Heroes?

Don’t get me wrong, though. ESWAT is not a bad game at all. What it is, is the very model of unremarkable. Serviceable. Fine, but almost entirely forgettable. It’s not hard to spot its inspirations both in theme and mechanics (Robocop meets Shinobi), but it never creeps out of the shadows they cast. Even in its time, it felt a bit stiff and outdated when stacked against other contemporary run and gun games like Contra. But it has a few really cool gimmicks and, while it certainly suffers somewhat from some afflictions it shares with many early 16-bit games, it’s a decent enough romp for action game fans. Perhaps most importantly for a 1990 game, it looks and sounds great next to the competition. 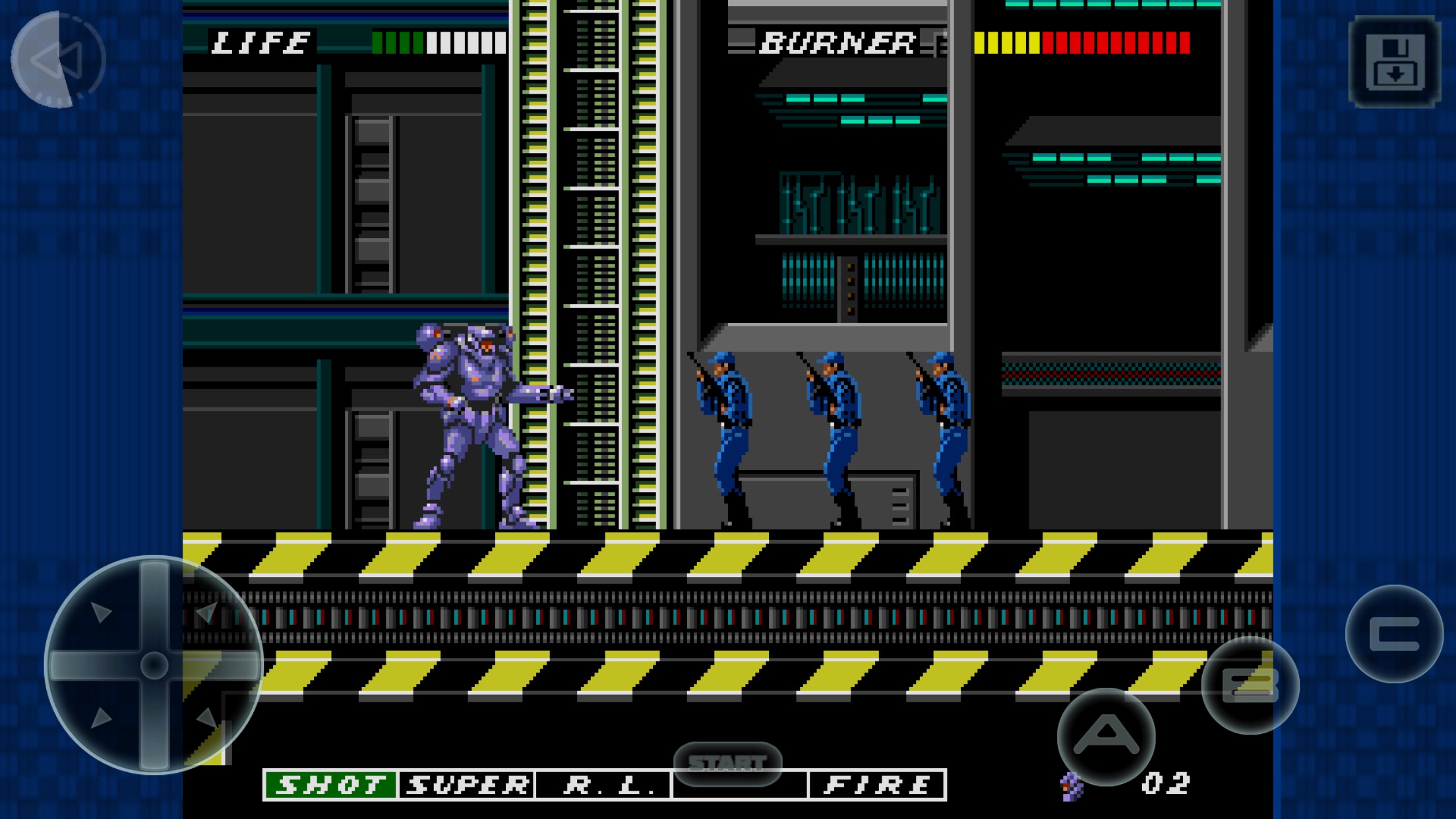 ESWAT: City Under Siege is using the latest version of the SEGA Forever emulator, and as such it offers similar performance and options to the last couple of games in the series, more or less. You can play for free if you don’t mind semi-frequent ads, or you can pay for an IAP to remove the non-SEGA ads and activate a couple of nice extra features. The helpful rewind feature is here to rub out the occasional stupid mistake, and you can save at any time. MFi controllers are supported for those who have them, and those who don’t can at least take advantage of reasonably customizable virtual controls. The emulation quality is decent enough at this point, I suppose, but some issues with audio, framerate, and screen tearing remain if you pay careful enough attention.

If you like Shinobi or Rolling Thunder and have an MFi controller, ESWAT can be a good time. An aggravating good time in places, but worth playing. It gets a lot harder to recommend this game if you’re not using a controller, unfortunately. Directly porting over games that were designed around a standard controller and fitting them with virtual buttons is never ideal, but it works better for some games than others. ESWAT isn’t especially demanding in terms of the number of buttons required. The game only needs the directional pad and three buttons to do its thing. One button fires your selected weapon, another jumps and activates your jetpack, and the third swaps your currently active weapon. 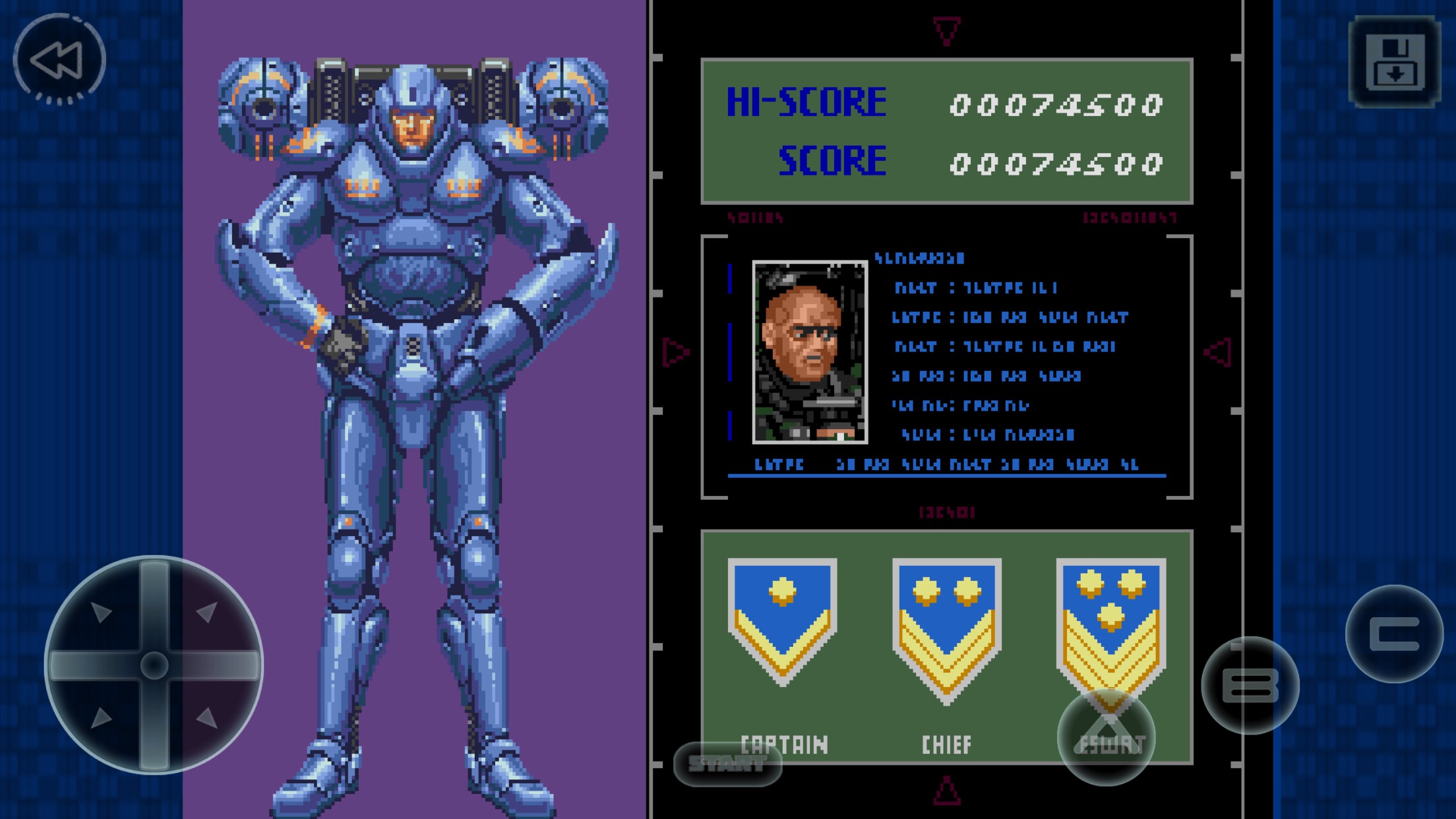 It’s that jetpack that causes most of the woes with touch controls. Maneuvering through the air is essential for survival in many stages, and you’ll need to hold down the jump button to stay aloft. You’ll frequently need to shoot while holding down that button, and at least for me, it gets pretty difficult to tap a virtual fire button while unfailingly holding down another virtual button with the same thumb. The margin for error in ESWAT is slim, with just a few lives and a few continues intended to see you through the game’s eight lengthy stages. You don’t even get the mercy of a free health refill after each level, so every hit really does count. The jetpack gives you more than enough of an advantage to see your way through with enough practice, but not when you can’t reliably control it. It’s especially critical for bosses, who tend to be child’s play when you can hang just above their reach and lob missiles at them, and unstoppable forces of frustration when you can’t.

Still, if you can deal with the virtual controls, there are some neat things going on in ESWAT. You play the first two levels as a regular police officer, with a tiny life bar and only a fairly weak pop-gun to protect yourself with. If you can clear those, you’ll finally be promoted to the rank where you get to wear the super-suit. Since you’ve played a fairly lengthy bit of the game without it, you can really appreciate its power in a way that wouldn’t be nearly as effective as if it had been given to you from the start. The suit allows you to take more hits, use the aforementioned jetpack to zoom around the screen, and choose from an assortment of cool weapons. Sometimes the advantages it gives you can almost feel unfair. Many enemies have no reply to your jetpack, even bosses. Unfortunately, the levels don’t really allow you to cut loose with your vertical capabilities. It feels like a wasted opportunity. 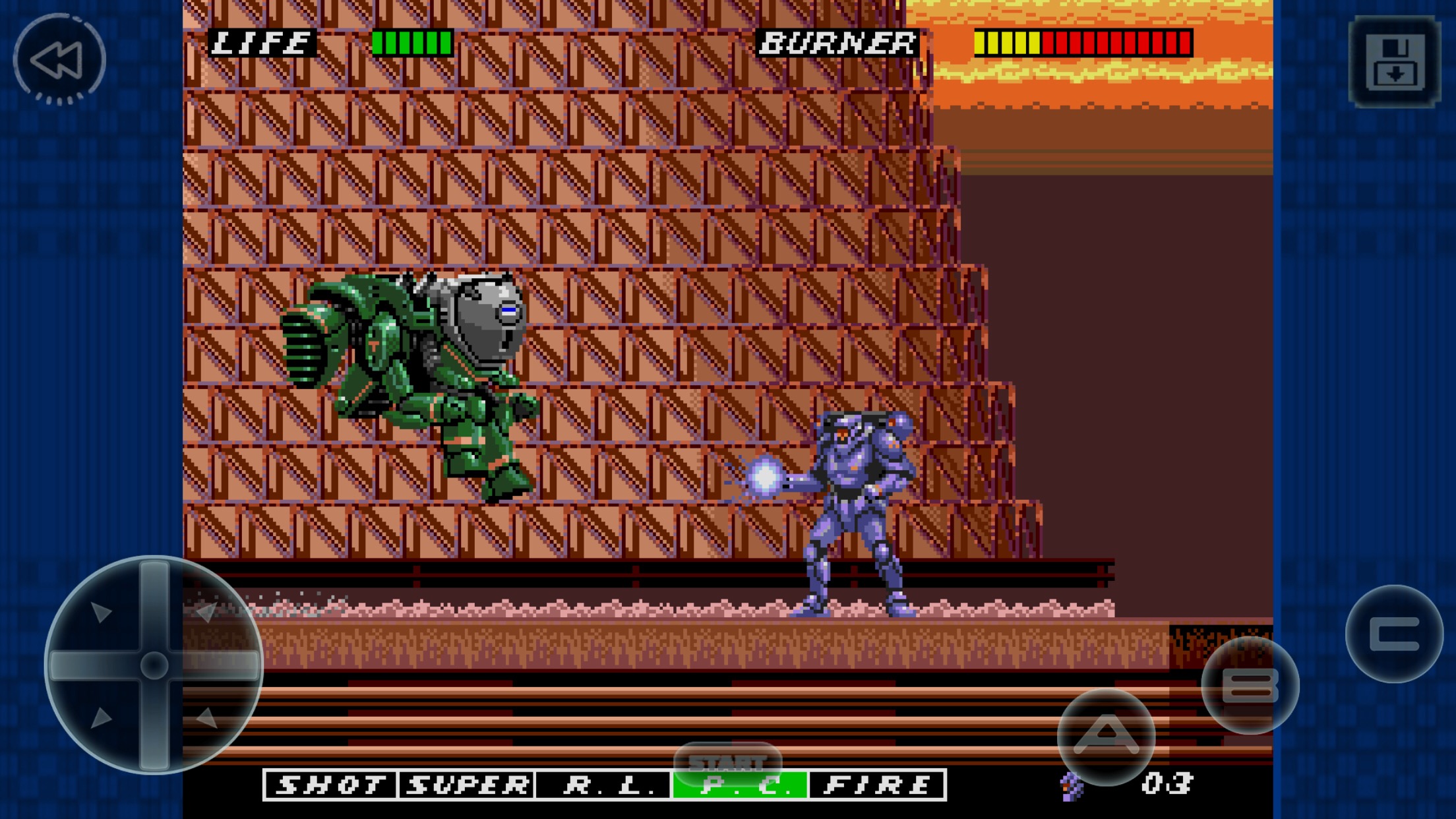 The game’s difficulty is terribly uneven in general. Your character is pretty big, the way many early 16-bit heroes tended to be, and not very agile on foot. He’s really good at catching bullets, and enemies like to suddenly jump out of nowhere to injure you with their touch. Losing a life is bad enough given the sparse amount you start with, but you’ll also lose your equipped weapon should an enemy take you down, forcing you to try and find it again. Depending on the weapon, that can lead to a Gradius effect where a single death can cause a downward spiral since you’ll be ill-equipped to survive long enough to power up again. The game is also fond of throwing hazards at you with little notice. Once you know they’re there, it’s not a huge problem, but the lost life points sting every time. Fortunately, the addition of save states allows you to circumvent the game’s sparse mid-stage checkpoints.

So where does that leave us? ESWAT isn’t an all-time classic, but it’s a decent game. It happens to be one that plays somewhat poorly with virtual controls, but if you have an MFi controller you don’t really need to worry about that. It’s a somewhat obscure title, and perhaps there are reasons for that, but I genuinely appreciate seeing games like this get re-released and given a little spotlight. I’m just not so sure that this port is going to show the game in its best possible light, and it frankly could use all the help it can get.