September saw the Play-Along finally changing gears from our JRPG-laden summer. Instead of menus and medieval settings, our intrepid Reloaders got a dose of action and the abstract with Supergiant’s Bastion. With the game being a little on the short side and fairly straightforward, the thread wasn’t among the busiest we’ve seen this year. On the other hand, a few commenters opted to narrate their adventures in a similar style to the in-game narrator, so I still think it was a win overall. Thanks to everyone who participated in the September Play-Along, and I hope to see you join us again! 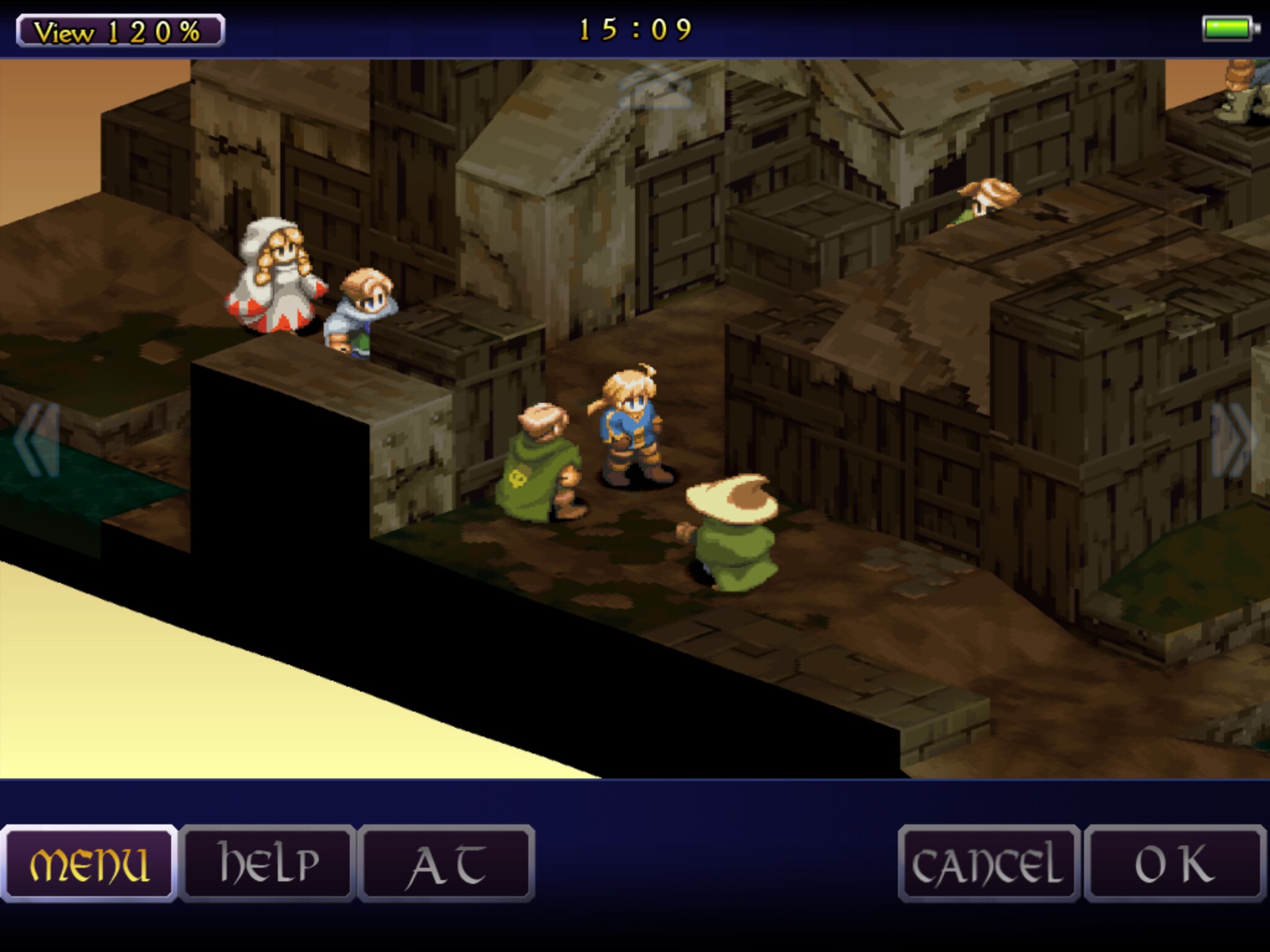 As is usually the case with my larger-scale projects like this, I have a schedule written fairly far in advance for the Play-Along. I wasn’t sure if my original schedule was going to hold out this time around, but fortunately, the game got its 64-bit update and all is well. Thus, it’s time for the RPG Reload Play-Along of Square Enix’s Final Fantasy Tactics ($13.99), the legendary TRPG that has a place in the hearts and devices of many of our readers. Now, I know what some of you are thinking: this is a really long game, and one month isn’t enough time. I agree! So like Final Fantasy 5‘s Play-Along, this one will be two months long. That’s right, you have all of October and November to get through. Let it never be said that this is not the TouchArcade age of kindness to the readers!

This is a pretty famous game, but for those who aren’t in the know, Final Fantasy Tactics is a turn-based tactical RPG spin-off of the popular RPG brand. Originally released on the PlayStation in 1997, the game was remade for the PSP in 2007 under the title Final Fantasy Tactics: War of the Lions. The iOS version of the game, which released in 2011, is an enhanced version of that remake that addresses some of its technical issues and bugs. The initial release had a few problems, but Square gave it a serious overhaul in 2013. Whatever the version, Final Fantasy Tactics is famous for its excellent story, enjoyable use of the Final Fantasy job system, and its brilliant soundtrack. In its time it was easily the most popular Japanese TRPG released in the West, and it even had two sequels that don’t really get talked about that much.

At its core, Final Fantasy Tactics is a fairly straightforward TRPG. The game consists of a series of battles that take place on a grid. Combatants take their turns in order based on their speed, and on each turn you can move the unit and use some sort of action. Your goal is typically to wipe out the enemy side, though there are occasionally other stipulations to keep in mind. Between battles, you can visit towns, shop for new items and equipment, and so on. What makes Final Fantasy Tactics stand out from a mechanical perspective is in its job system. As you beat up on enemies, you’ll earn experience points and job points. The former level you up like in any other game, but the latter have a different use. When you accumulate enough job points, you can use them to unlock new abilities for that character. You can mix and match any earned abilities, so much like in Final Fantasy 5, you can create some incredibly powerful characters if you know what you’re doing. 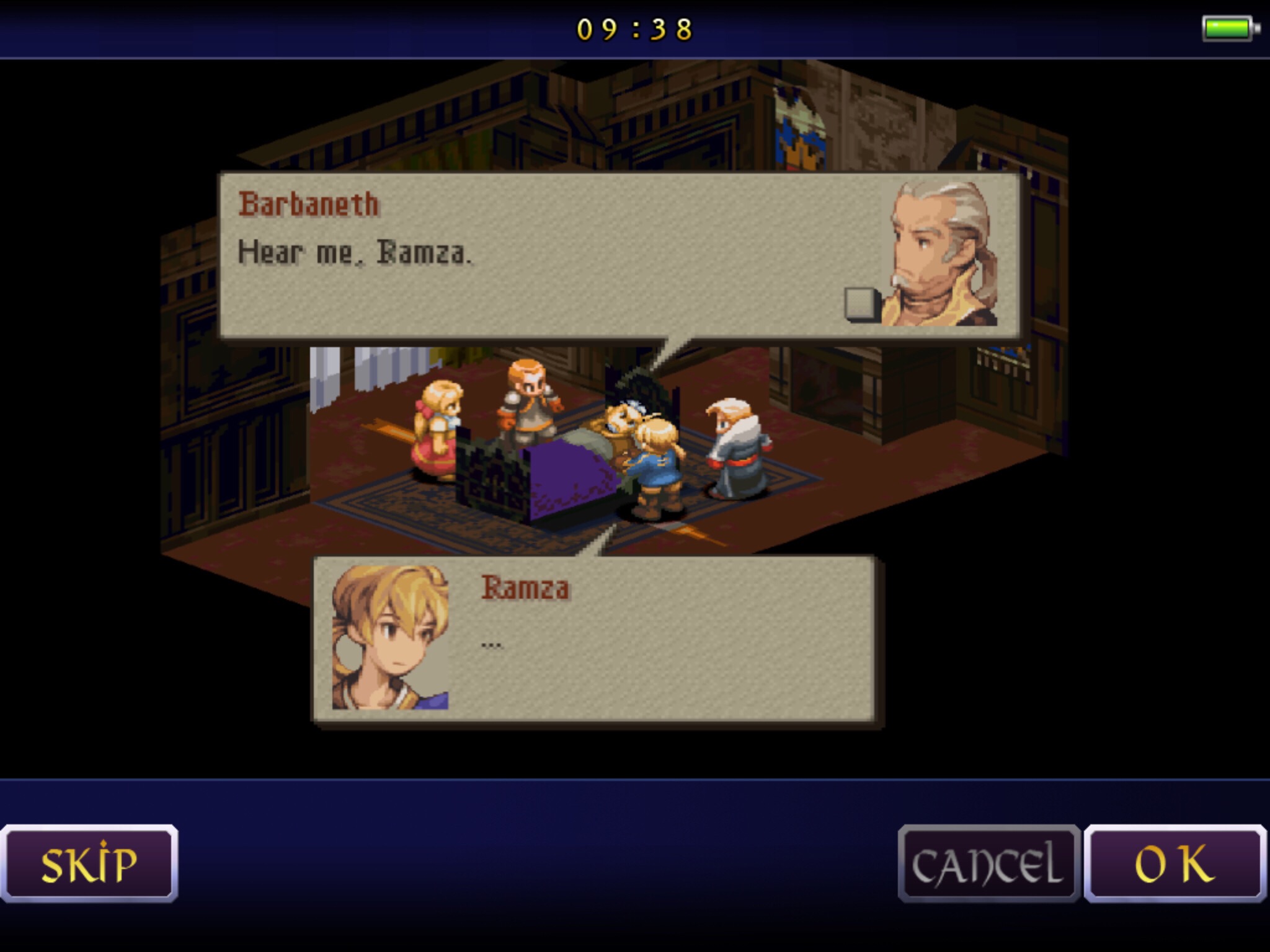 If you’re playing the game for the first time, I recommend just playing it normally. It’s a fairly complicated and challenging game as it is, so I wouldn’t recommend trying any special rules or challenges. The main advice I’ll give you is that due to the way the job system works, you’re better off focusing on a regular group of characters instead of spreading things out. Since many of the named story characters have some useful unique abilities, I’d highly recommend making them part of your regular team as soon as they’re available to you.

Don’t forget to use your job points, either. The game won’t remind you, so if you don’t use them, you’ll be making things a lot harder for yourself. Oh, and always make sure you’re keeping at least two save files. Grinding is possible in this game, but certain battles go directly into another one, and if your only save is between them, things can get sad in a hurry. One warning about grinding, however. While the story battles are fixed, random battles scale according to your level. If you grind too much, you might find the enemies getting very difficult while you’re still sporting some ancient gear. Grind responsibly.

Now, for those of you who have played Final Fantasy Tactics before and are looking to add a little spice to this playthrough, I’ve found a few fun options. You’re free to play normally, choose one of these, or even do your own thing, of course. These are just some suggestions. 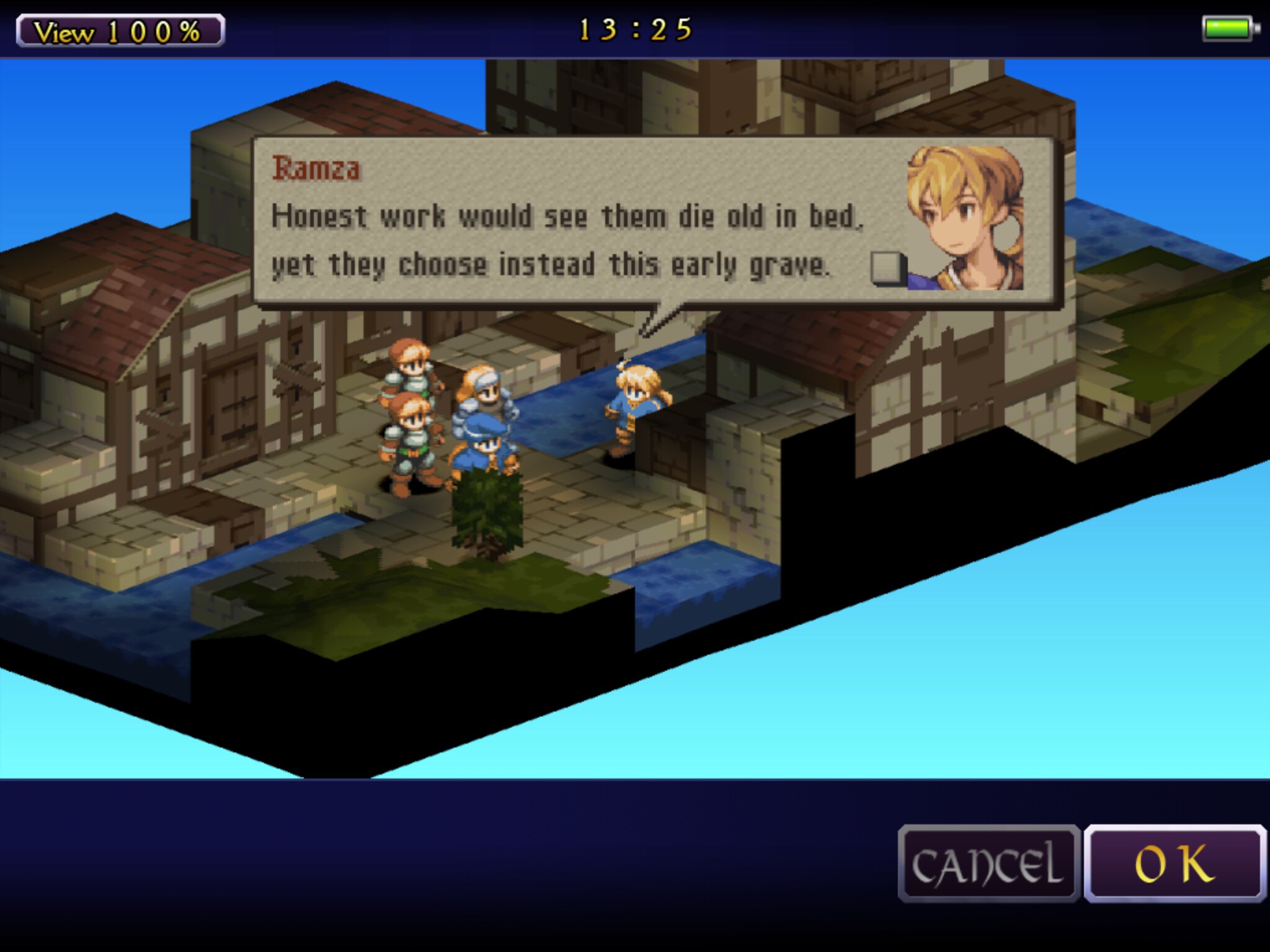 No Random Battles for Story Characters: You can’t avoid some of the random battles, so it’s almost impossible to keep random battles out of the works completely. But you can choose your party for those battles, and under this rule that party should only consist of generics. This keeps your story characters from becoming too powerful and forces you to carefully consider how to spend their limited supply of job poins.

The Pokemon Challenge: Make Ramza into a Orator as soon as possible. The direct route is to switch him to a Chemist immediately and reach level 2 in that job, which will open up White Mage. Switch to that job and reach level 3, which will open up Mystic. Change to that job and reach level 3, and Orator should be available. Now, for the rest of the game, your party can only consist of story characters that are forced on you, Ramza as an Orator or White Mage, and four monsters. Feel free to swap out the monsters as you like.

Shades of the Fiesta: You’ll only be using Ramza and three other characters. Pick four jobs, randomly if you like. You can only use those jobs and abilities from those jobs, and like the Fiesta, each character must be using a different job as their main. You can only use other jobs if they are prerequisites to unlocking your selected jobs, and must not spend any of your job points on abilities from them. 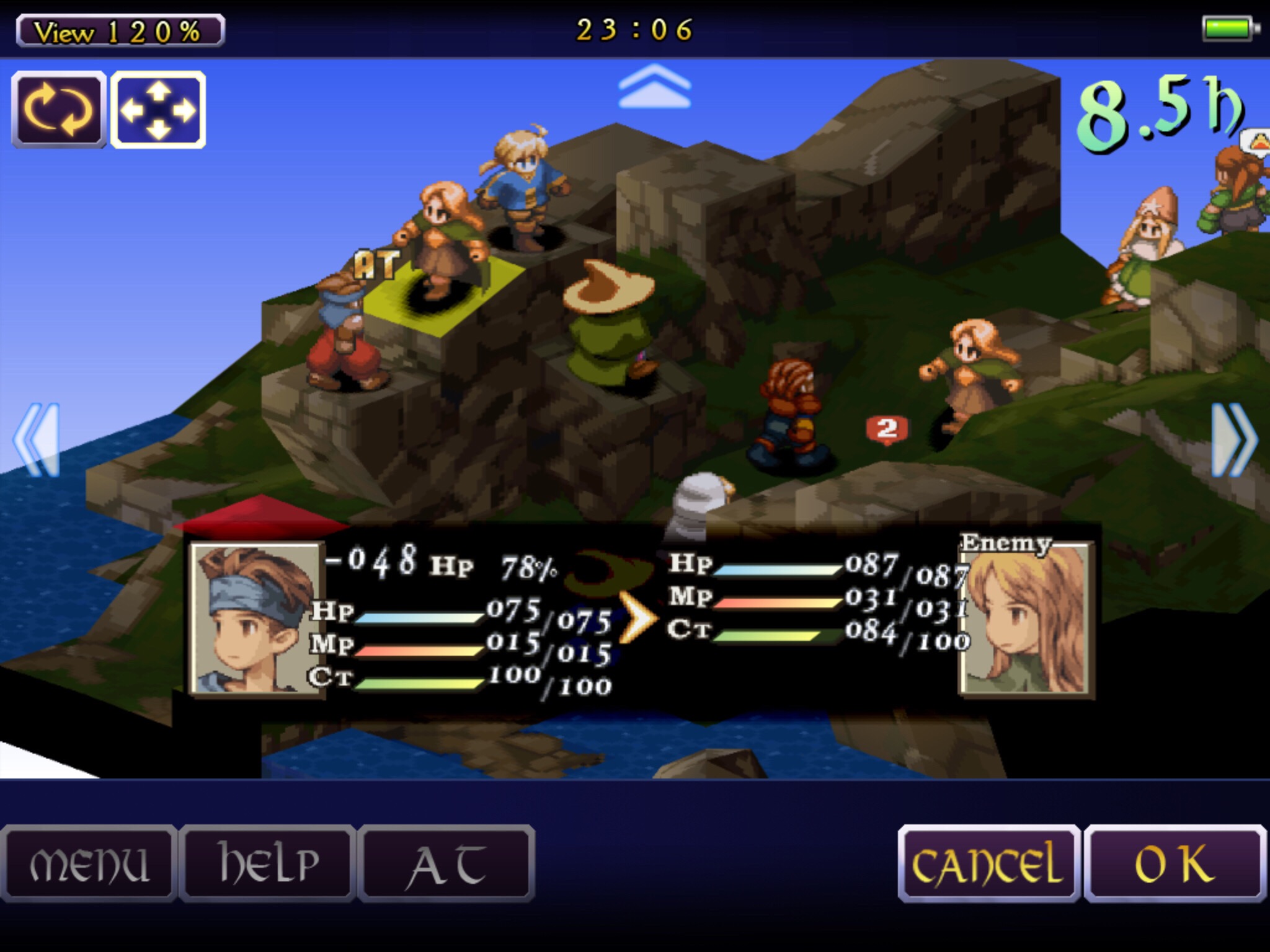 No Multi-Classing: Characters may only use skills from their current job. Feel free to change jobs as you like, but you cannot equip any of the abilities you’ve learned from other jobs. A little extra bite, but definitely doable.

There Can Be Only One (Job): This one can be tough. Pick a job or roll one randomly. Your party should consist of Ramza and other characters, but the catch is that they must all be using that job and only that job. Warning: I’m not 100% sure every party can beat the game this way, so go at your own peril.

Ramza Solo: Are you tired of having fun? Want to see the true hell that Final Fantasy Tactics can be? Well then, you might be looking for the Ramza Solo run. This is just what it sounds like: you, Ramza, the occasional mandatory guest character, and a whole lot of bad guys to take down. You can beef up your Ramza as you like, but you can’t bring any other characters into a fight unless the game saddles you with them. It can be done!

Whether you choose a challenge run or a normal playthrough, make sure to come and join us in the TouchArcade forums to discuss the game. As ever, all you need to do to join is to grab any version of the game and head on in to the October/November 2017 RPG Reload Play-Along thread in the forums. Don’t have a forum account? Well, that certainly won’t do! Fortunately, accounts are free and pretty easy to make, so I’ll go have a sip of my tea while you do that little thing. After that’s settled, all you have to do is pop in to the thread and say hello. You can share your adventures, get advice, or just chat in general about this month’s game with your fellow Reloaders. Oh, and if you’ve got screenshots, do share. We love screenshots! 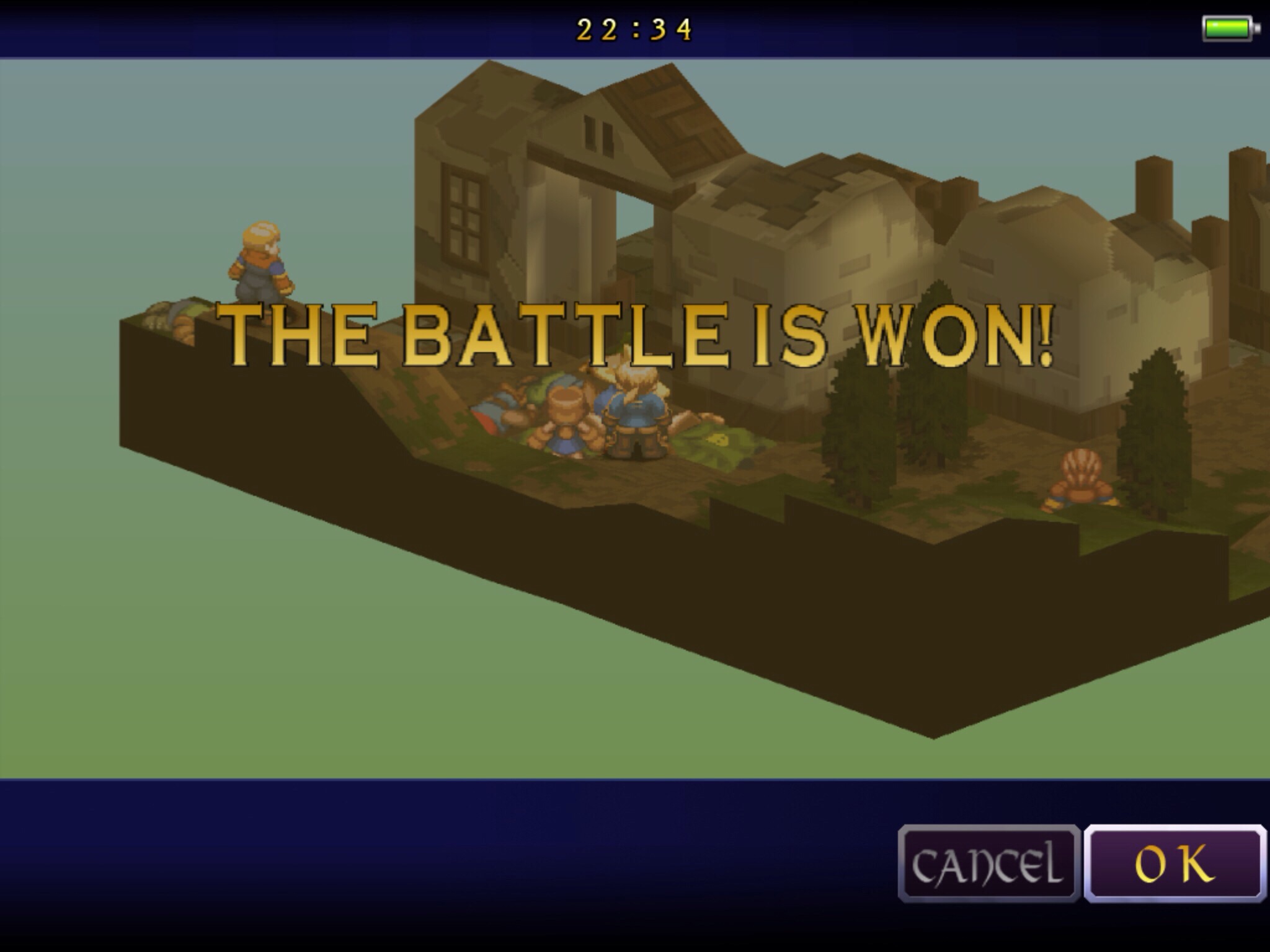 As for me, I’ll be back next week with the next Classic Reload. Hold on to your pants, friends, because I’m going to be taking a look at a TouchArcade favorite that recently got a 64-bit update. Mikey Shorts ($1.99) is on the menu, and I don’t mean that literally because who eats a kid? Not me! Ha. Ha-ha. Phew. Anyway, I’ll see you all next time. Thanks for reading!