Hello, gentle readers, and welcome to the Classic Reload, the regular feature where we time our walk to the tick of the clock. In each installment of this series, we take a look at a game from the App Store’s past to see how it’s holding up in the here and now. It’s a chance to revisit old favorites, reflect on their place in the overall library, and to take a deeper dive than our reviews typically allow. Your only guide on this journey is me, an observer from your own time, taking the form of a hologram that only you can see and hear. I try to pick a balanced selection of games, but if you have something you really want to see, don’t be shy! You can leave a comment below with suggestions and I’ll add them to the master list for future consideration. The schedule is done quite far in advance, so you might not see them soon, but it never hurts to try. 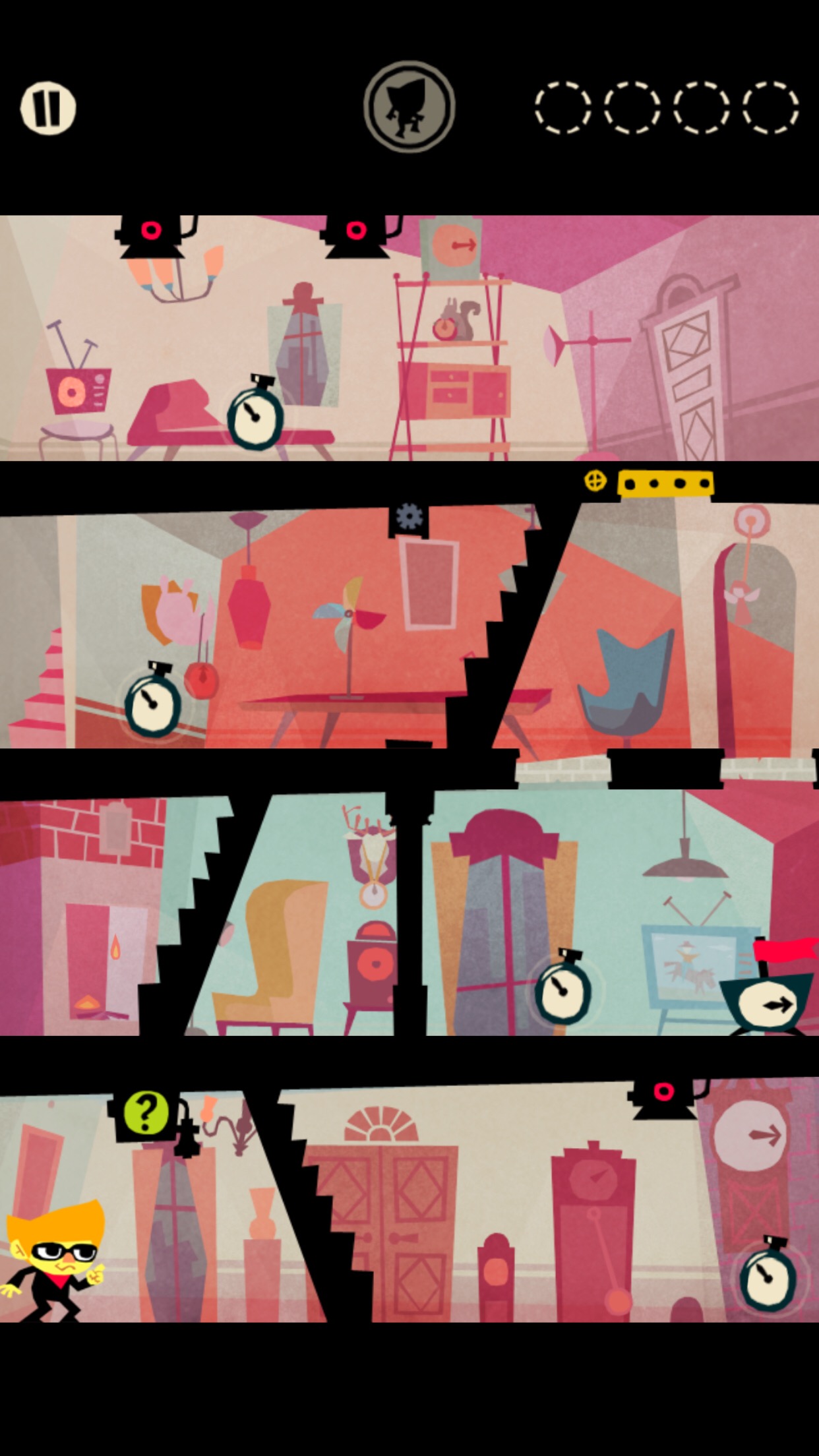 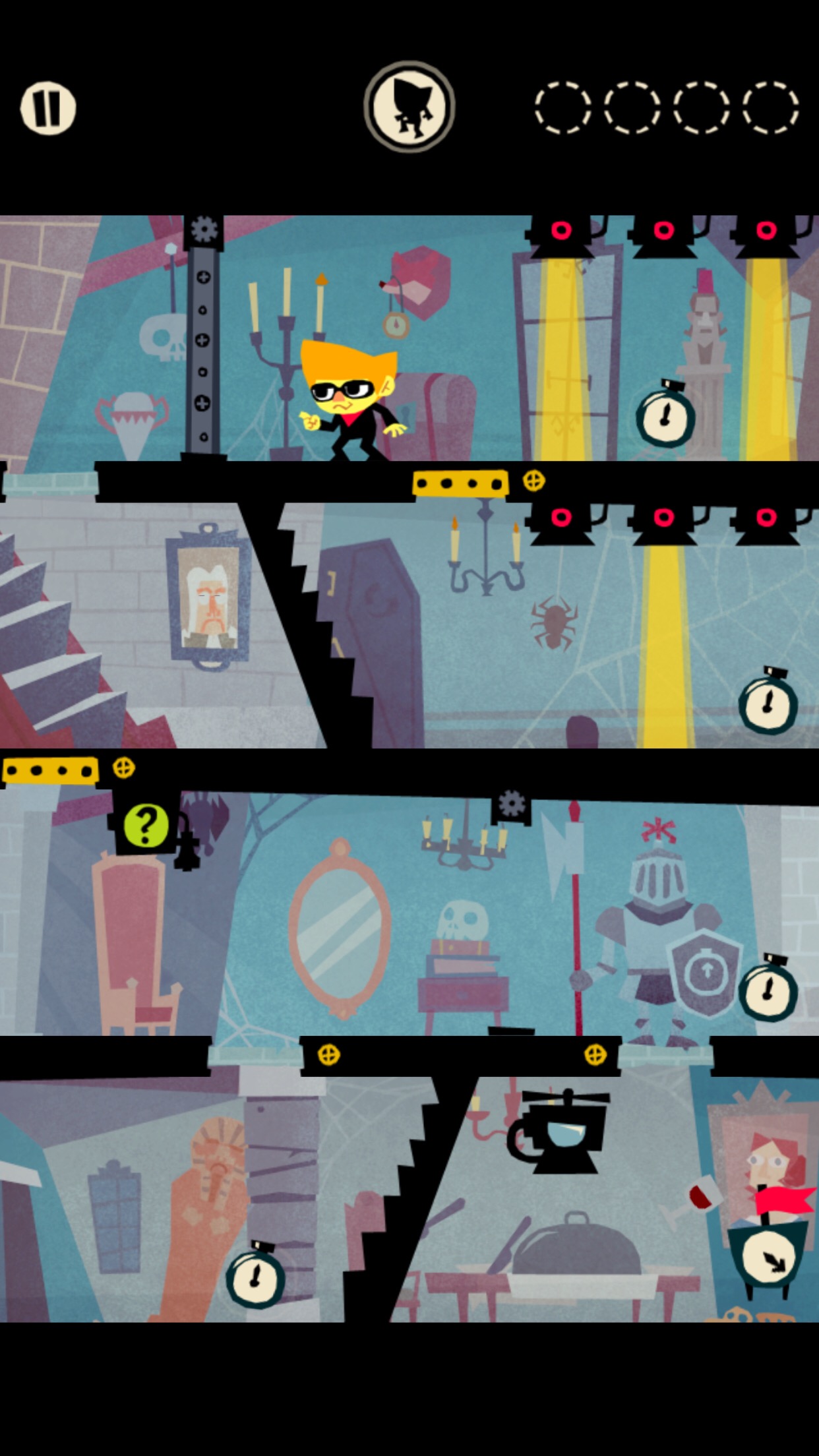 Simogo is a developer that has taken two forms in its history. One form, perhaps the more well-known these days, is that of a creator of clever, thoughtful, and inventive works of interactive fiction. This is the Simogo who brought us Year Walk ($3.99), Device 6 ($3.99), and The Sailor’s Dream ($3.99). But before that Simogo, there was another Simogo. An equally clever Simogo, but one with a very different focus. This was a Simogo that had a knack for arcade-style experiences, brightly colored bits of child-friendly, adult-approved entertainment. This Simogo was just as tenacious about exploring the things that mobile devices were uniquely well-suited for, but in the context of zippy action games rather than ponderous adventure games. It was this Simogo that brought us Kosmo Spin ($2.99), Bumpy Road ($2.99), and Beat Sneak Bandit ($2.99). 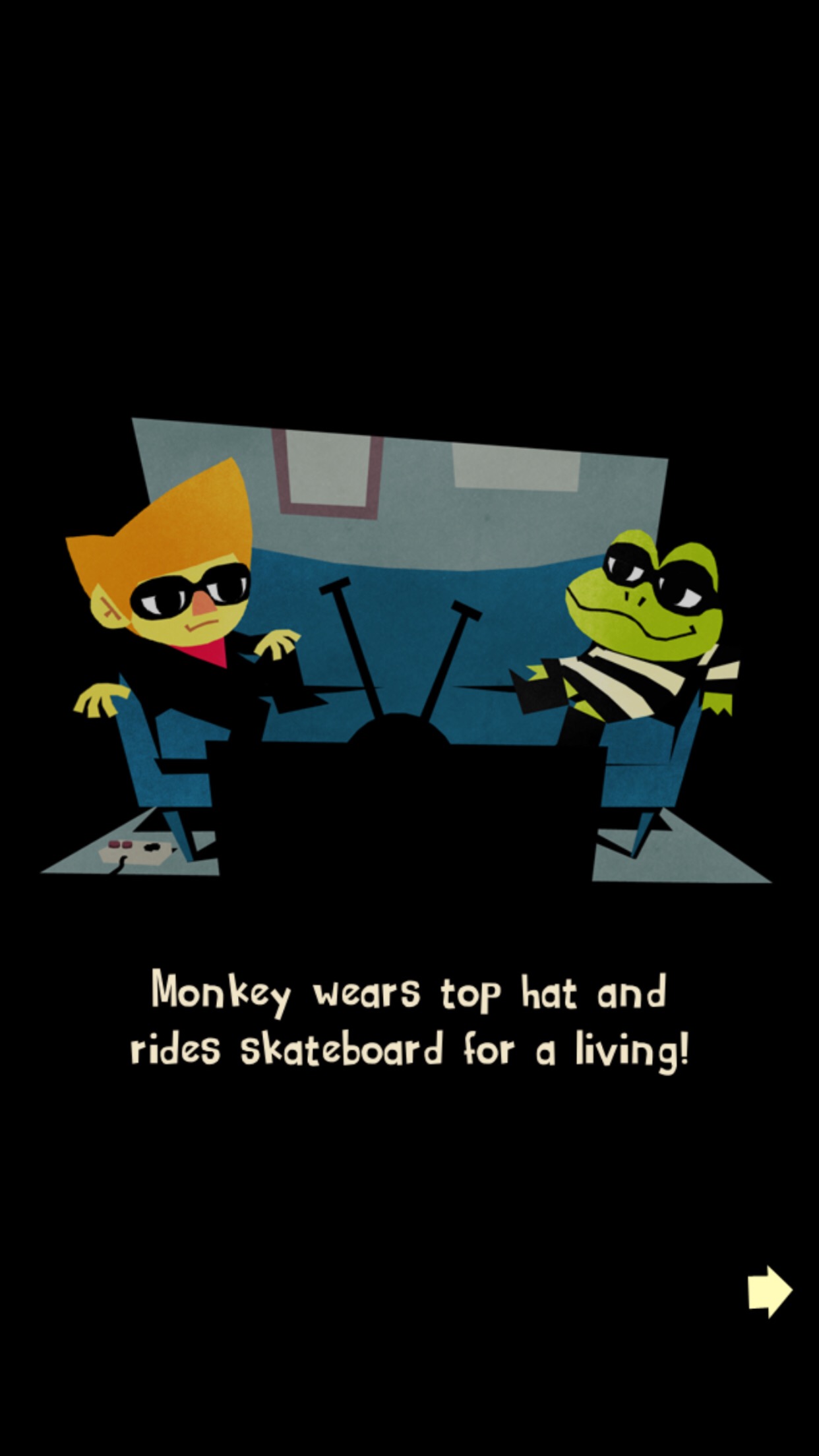 Beat Sneak Bandit also has two forms. On the surface, it’s a relatively player-friendly rhythm game that asks you to make your way to a big clock in each of its 40 (+16) stages. There are many obstacles along the way, but it’s rarely very difficult to cover the route from your character to the goal. Keeping the beat is essential for moving forward, but messing up that basic element won’t hurt you too much. Even if it becomes too tricky, the game will step in and ask if you want to go ahead to the next stage at no cost or penalty. But the big clocks are not the only collectibles in each stage, and if you ever want to see those plus-sixteen stages I threw in the parentheses at the beginning of this paragraph, you’re going to have to face the other form of Beat Sneak Bandit. It’s not a pretty form, but if you can come to grips with it you’ll feel like you’ve successfully danced with the devil.

The game was announced mere months before its release in February of 2012. These were different times for the App Store, its adorable puppy phase when successful developers tended to see their paid game sales go up with each new release. Simogo was coming off of a pair of popular titles, so they didn’t need to do quite as much convincing for the next game. That allowed them to keep the lid on it until they were good and ready to show the game off. Interestingly, the idea for the game had been kicking around since the very start of the company. Originally, it was going to be an auto-runner with rhythm-based moves to help you avoid obstacles. That probably sounds a lot like Bit.Trip Run, which released a few months after Kosmo Spin. I’d imagine that would have been enough to put them off their original idea even if they hadn’t already discarded it. 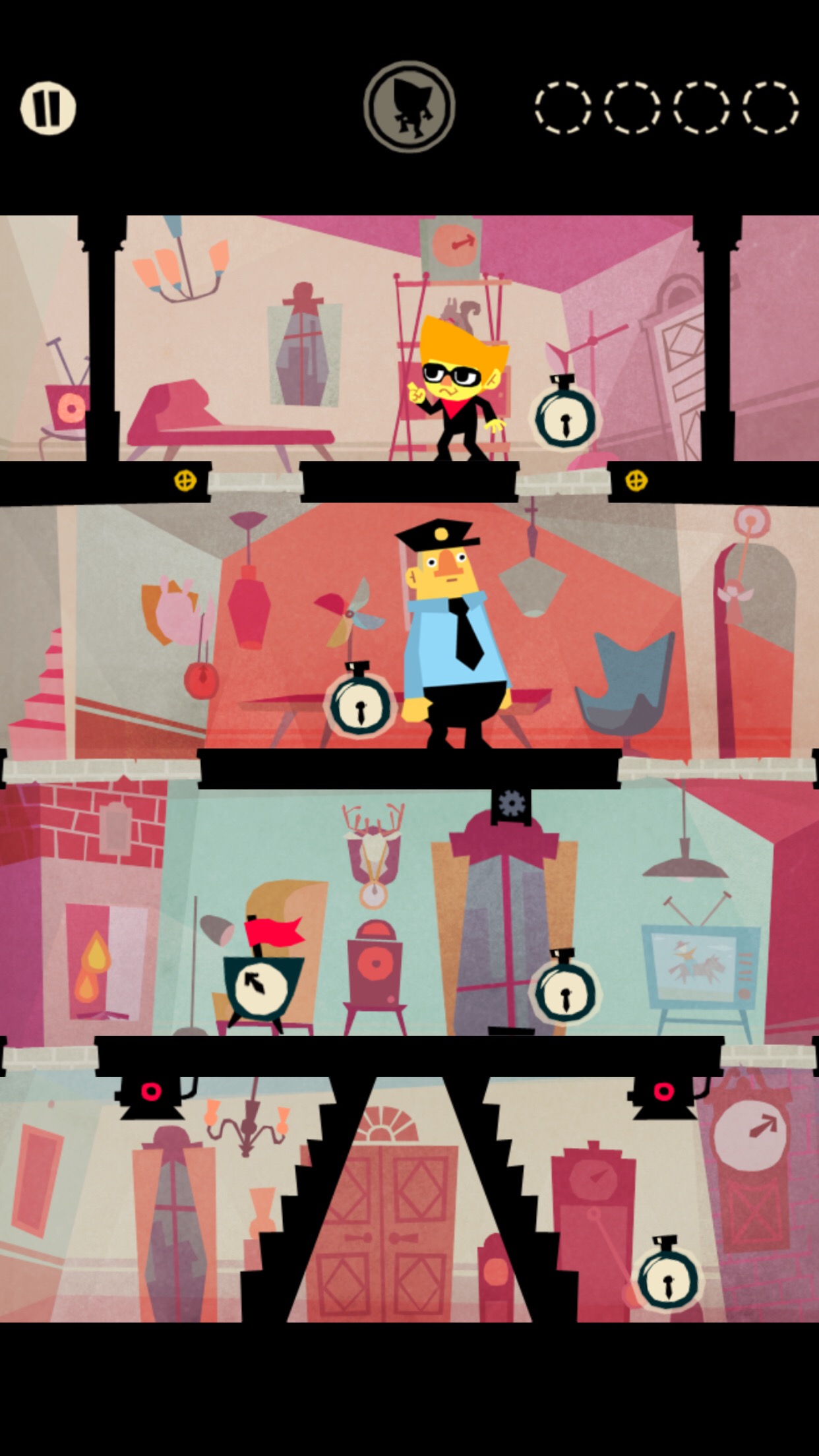 The second go at the game concept came when Simogo started focusing on the project after the release of Bumpy Road. In this version of the game, the Bandit would make his way automatically through the stages. Your role was to swipe against the beat to open doors and activate switches in order to create a safe route. Unfortunately, it was a bit too complicated, so the team went back to the drawing board to try to find a way to simplify things. In the end, they drew elements from both concepts to create just the mixture that they had been looking for. Well, almost. There was one gameplay idea they ended up nixing that would have you tapping in beat to move right and backbeat to move left. That was too difficult for those who aren’t musically-inclined, so after a lot of debate among the developers, they ended up cutting backbeat-based actions out of the game entirely.

It was almost certainly the right call. Beat Sneak Bandit is a pretty tricky game as it is if you have difficulty keeping rhythm. Having to recognize and go along with backbeats would have made it nearly impossible for that sort of person. I know, because I am that sort of person. But my belief that it was the right call goes beyond my simple selfish desire to be able to play the game. No, I think it was the right call because the fact that the Bandit can only move in the direction he’s facing is an integral part of the puzzle design, perhaps the element that makes the game work the most. While I’m confident Simogo could have designed compelling levels either way, I firmly believe this made for the better game. It probably goes without saying, but I think it also made for a game with wider appeal. 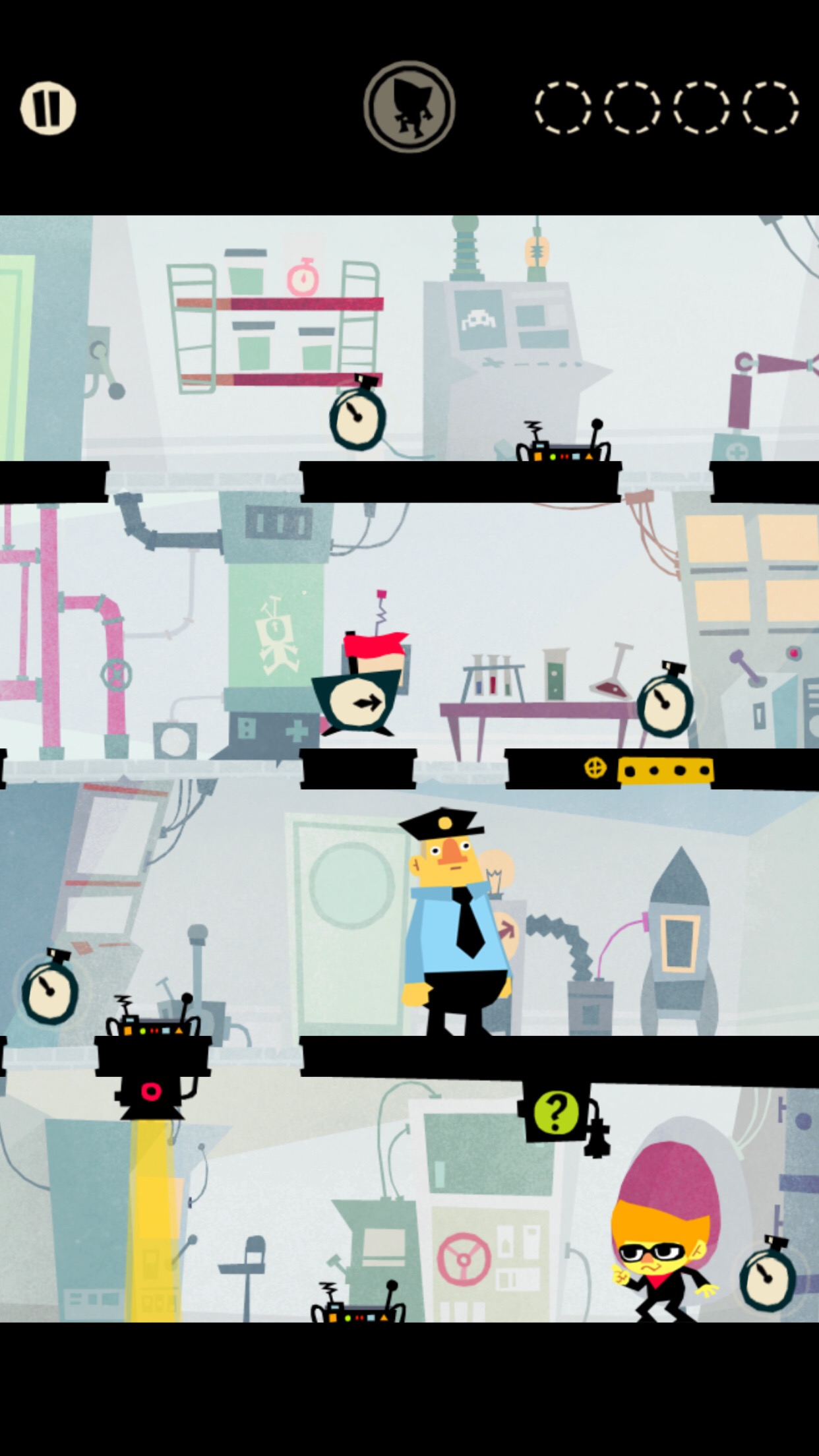 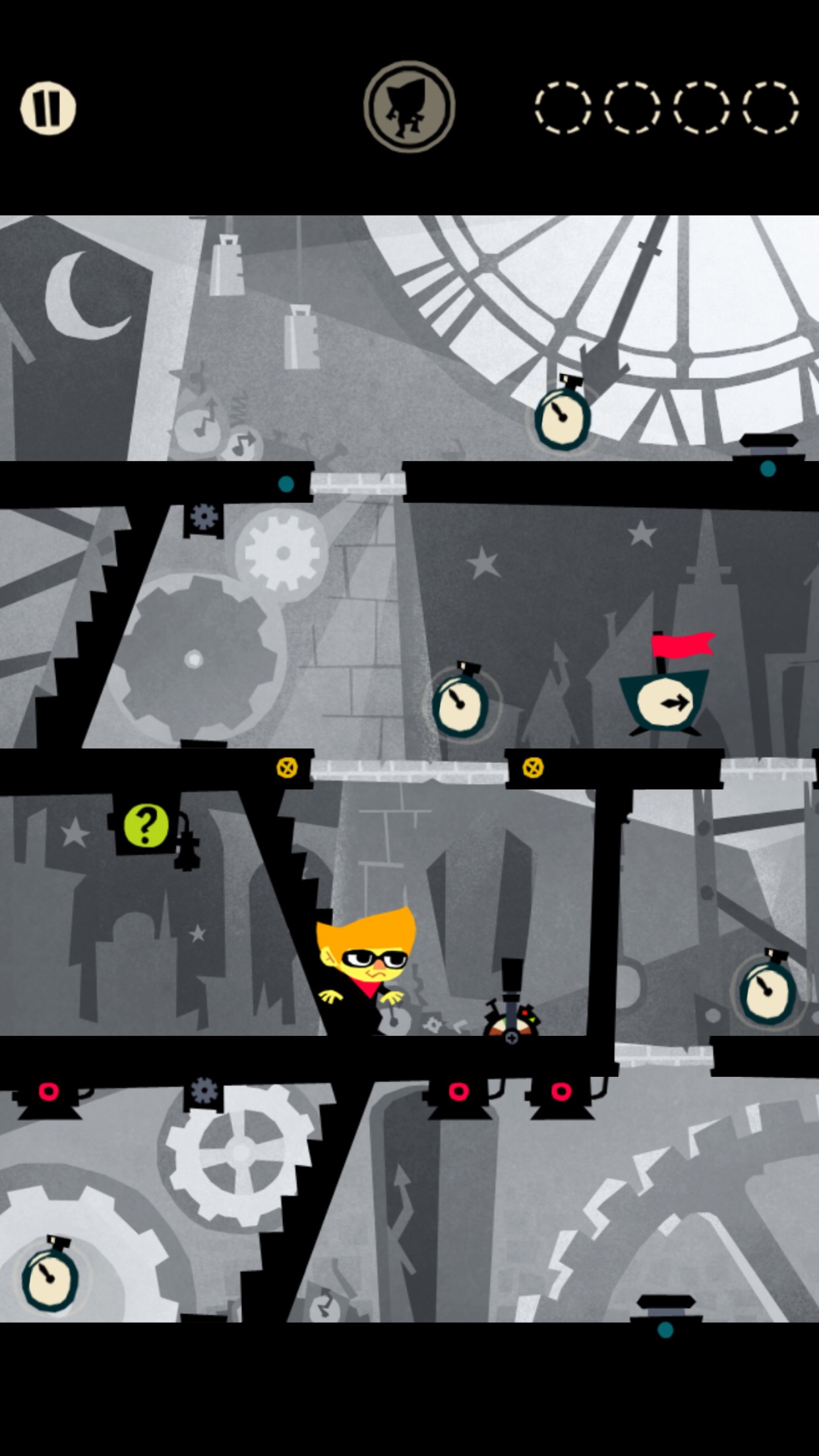 I suppose this is as good a place as any to explain what the game actually is, though. In Beat Sneak Bandit you play as a benevolent thief of sorts who breaks into an evil Duke’s mansion to steal back all the clocks that he stole from the innocent townspeople. You do this with the help of a masked frog, of course. Each of the game’s 40 (again, +16) stages consists of a single screen that has four levels connected in various ways. On each level rests a small clock, and somewhere in the stage sits a big one. All you have to do to move to the next stage is to get your hands on that big clock. Collecting the smaller ones is the real challenge, and not one without rewards. For every ten that you collect, you’ll open up one special, super-hard bonus level. These levels are played in silhouette, and while they’re extremely difficult, I’d imagine anyone who can collect all of those mini-clocks will appreciate the challenge. 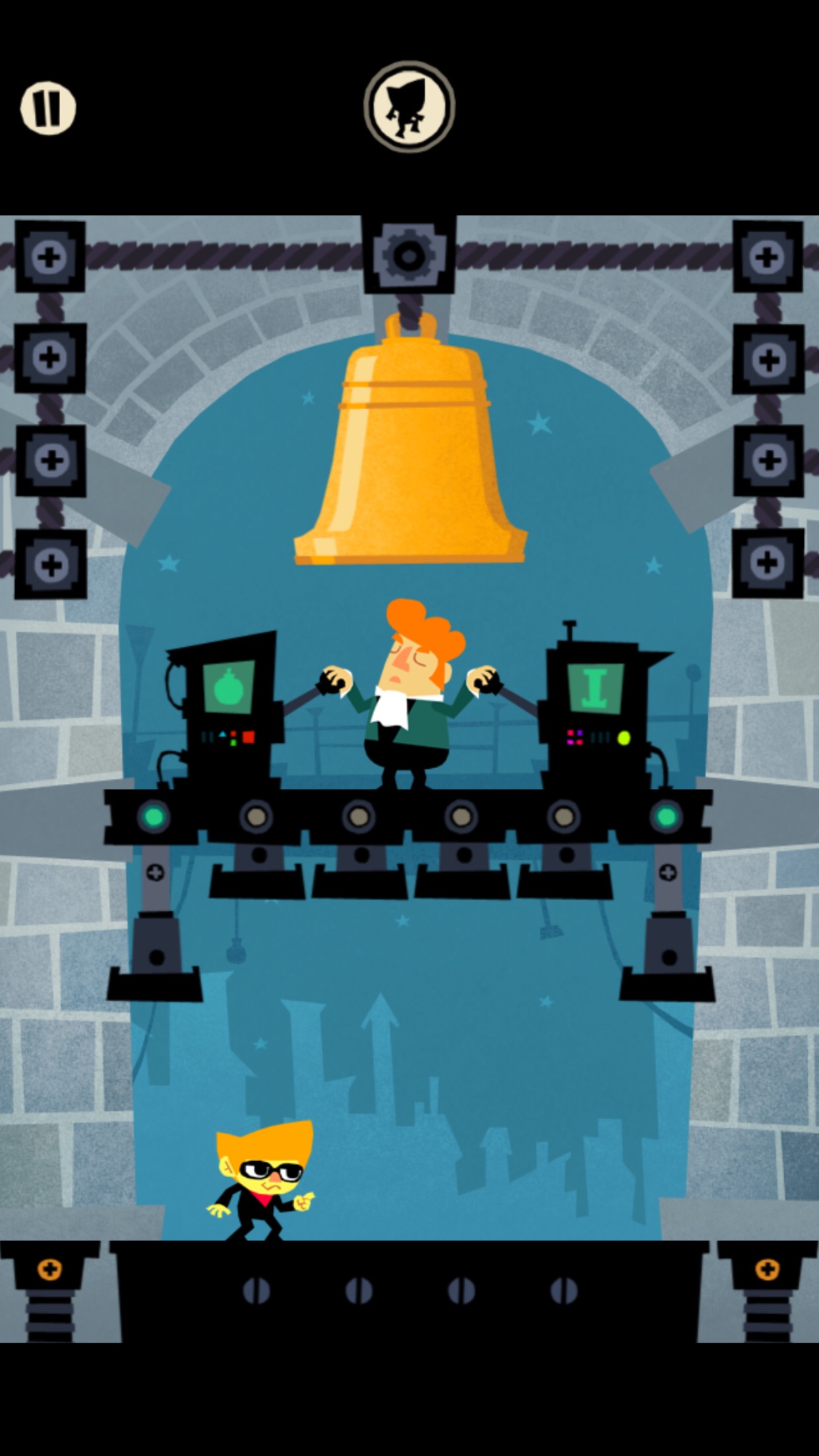 The Bandit has a huge list of moves. Well, no, he actually just has one. He can step forward. I guess two if you count turning around when he hits a wall. Three if we count answering the phone for some tips from his froggy friend? The point is, all you really need to do is tap with good timing. A tap that matches the music’s beat will move the Bandit one step forward. Tapping off-beat just gets you a little red flash, with the Bandit not moving at all. This is very undesirable, depending on where you are standing. On top of that, any uncollected clocks in the row you’re in will be destroyed if you make a mistake. The Bandit can only turn around when he hits a wall or some other solid obstacle. Is a guard’s butt solid? I suppose it must be. This would not be a great problem were it not for the fact that our Bandit friend can only climb (and indeed, must climb) stairs that head up in the direction he’s facing. There’s a certain finesse involved even in the basic action of navigating an empty stage.

Naturally, not many of the stages are empty. In fact, as you make your way through the game, you’ll find the designs getting to the point where there are few safe places to stand. Gimmicks like trapdoors, gates, teleporters, switches, and even a time-stopping device can help or hurt your efforts to make your way to the clocks. Less friendly are the spotlights, guards, and drones that can put a quick end to your attempt if they catch you. When you look at it on paper, that’s not a whole lot of things to worry about, but the way Simogo combines these simple obstacles can make for some really nasty sequences. All of these bits and bobs are moving along to the beat, usually in a shorter loop than you would expect. One of the most essential things to do in Beat Sneak Bandit, apart from hitting the basic beat reliably, is to carefully examine this loop and search for a way through. 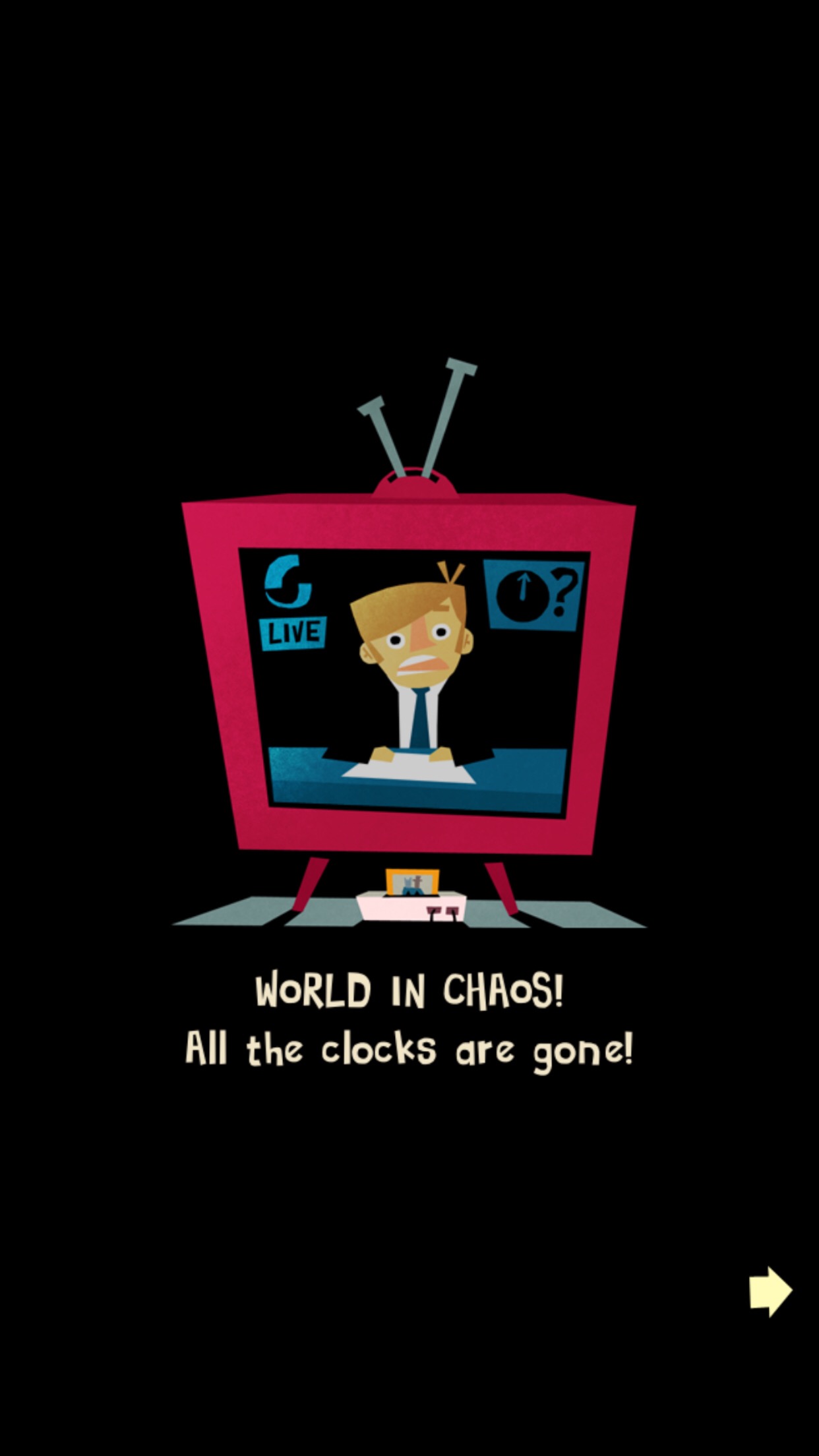 It’s a really fun game, and replaying it is almost as enjoyable as the first time through. The only low point of the game, in my opinion, is the final boss battle. It’s a bit different from every other stage. You need to take apart the Duke’s machine piece by piece using bombs and springboards. This involves running back and forth underneath the machine, where the Duke attempts to crush you with a row of pistons. Conceptually, it’s fine. Neat, really. It’s just that it drags on too long, and if you make a mistake at any point, you’ve got to do the whole mess over again from scratch. It’s the rhythm game equivalent of an HP sponge, and I’ve never been overly fond of those types. It’s only a small slice of the game, relatively speaking, but it does make things close out on a sour note.

Beat Sneak Bandit has nearly a flawless presentation. The music is both varied and terrific, and the visuals are stylish and, as a result, virtually timeless. While you really can’t fully enjoy the game without sound, the developers even thought to put a little visual aid for those who have trouble keeping the beat without some kind of feedback. It’s hard to believe this game didn’t need any updates for more than half a decade. Simogo only recently had to return to it to add 64-bit support. Naturally, while they were at that job they also spiffed up everything else. The game has never looked better, and if you told me it came out last week, I’d believe you. I’m happy Simogo came to the rescue on this game and the rest of their library, and I only hope that they will be there again should the need arise.

That’s just my take on Beat Sneak Bandit, though. What do you all think? Please leave your comments below telling me your thoughts on the game and any other memories you might have of it. Also, if you’re game for joining in on a game, the RPG Reload Play-Along of Bastion is still going strong in the forums. Come on by and say hello, we don’t bite. Well, most of us don’t. As for me, I’ll be back next week with the next part of our RPG Reload Glossary series on the history of action-RPGs. Thanks for reading!