The original Knights of Pen & Paper ($4.99) was a goofy, grind-heavy RPG with a novel set-up that allowed it to poke fun at the many tropes of the genre. It painted over its repetitive mechanics with a sweet candy coating of enthusiastic charm and only slightly overstayed its welcome. In spite of its flaws, it was a great starting point both for the Pen & Paper concept and its developers Behold Studios. Oddly, the two went their separate ways when Behold opted to work on Chroma Squad ($4.99) instead of putting together a direct sequel to their popular game. The task of crafting Knights of Pen & Paper 2 (Free) fell to Kyy Games, and it’s safe to say they didn’t quite meet the expectations of many of the fans of the first game. Now, Behold is back to try their own follow-up to Pen & Paper. Instead of trying to reinvent the wheel with a similar setting, however, they’ve decided to take things to space with Galaxy of Pen & Paper ($3.99).

For the most part, this ends up being a case of happy reunification. For however well KoP&P2 was able to loosely ape the structure of the first game, it had trouble matching the quirky tone of Behold’s efforts. You could also tell that the developers were uncertain about changing the formula too much, as even their new additions were barely used in the course of the game. Galaxy of Pen & Paper comes off as though the developer is putting back on a comfortable pair of sneakers. It’s a Behold Studios game, inside and out. Their time with Chroma Squad has helped them develop their skills a fair bit, and Galaxy ends up a more ambitious and well-designed experience as a result. The other side of that coin is that like Behold’s other games, Galaxy suffers from quite a few bugs. It’s also very bad at explaining itself, which given the game’s increased complexity could be an issue for some. 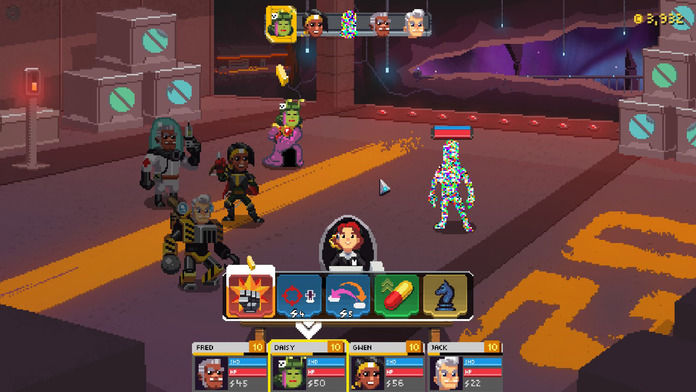 I suppose I’m getting ahead of myself here, however. For those unfamiliar with this brand, Galaxy of Pen & Paper is a space-based RPG that uses turn-based battles, random encounters, leveling up, and all that usual stuff. The big selling point is in its premise, which sees you playing as normal people role-playing the in-game characters. This allows the game to engage in a lot of silly meta-humor and pop culture references, providing a perfectly valid reason for characters to break the fourth wall at a moment’s notice. Which they do. A lot. This time around it’s less about skewering the tropes of games and more about science-fiction in general. From Hitchhiker’s Guide to the Galaxy to Akira, nothing is safe from being touched on in Galaxy‘s script. Given the wide spread of topics that the developers seemingly felt they had to pack in, the main plot is pretty disjointed and nonsensical. Yes, even more than the stories in their last couple of games.

The play is the thing, though, and I’m happy to say that Behold has made a number of improvements over the already slightly-stale structure of the original game. For starters, instead of wandering around on a single map going from location to location, you’ll instead wander the galaxy, traveling through several systems each with their own planets. Each of those planets has its own mini-map made up of various locations, as well. I’m not sure how much bigger it is in actuality, but it feels bigger, and that counts for something. As in previous P&P games, every time you travel between two points, you run the risk of hitting a random encounter. Unlike those games, those encounters may not necessarily lead to a fight. Often, you’ll have to choose between a few responses, each of which will provide a different result.

That’s one way the game spices up the frequent traveling, and it works nicely. Also helping is that there are now ship battles to go with the regular party battles. Space travel is no different from land travel with regards to potential for random encounters, and when battles occur, you’ll go ship-to-ship against your foes. The system for ship battles is even simpler than the straight-forward standard combat, but it serves its purpose well enough. One of the biggest problems with the first two P&P games was that you weren’t doing a whole lot other than fighting battle after battle with very little reason to even change your tactics. To an extent that problem remains in Galaxy, but the ship battles and choice-based encounters at least show the developer is trying to address it. 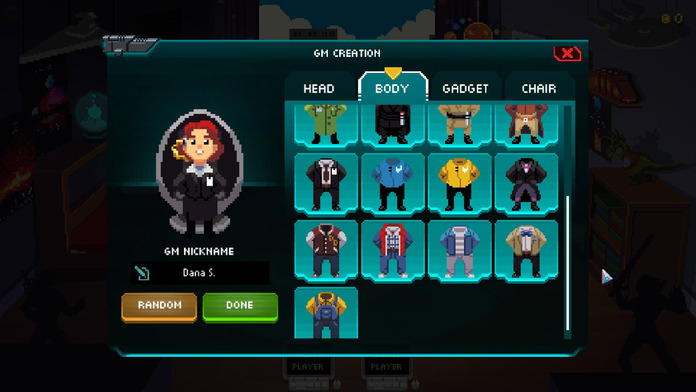 Other areas show less improvement. Nearly every main quest still consists of going somewhere and fighting a set number of enemies. Some new side quests have been added, but only one type of them will end in anything other than fighting. Be prepared to spend a lot of time in battle, basically. Behold Studios also hasn’t quite mastered the art of difficulty balancing. The same uneven challenge found in their previous games is present here. Many quests allow you to control the difficulty by letting you choose how many enemies you want to fight at once, offering better rewards for those who take on bolder assortments. The bosses, on the other hand, tend to be fixed encounters. Depending on how much you indulge in side content, you may find yourself getting absolutely wrecked by some of these bosses with little recourse. All you can do in these cases is to spend some time grinding up by taking on side quests.

This becomes less of a problem in general the further in you go, however. While you start with just two characters with very limited sets of skills, you’ll soon have many more options at your disposal. The new skill system is particularly neat. When you level up, you’ll earn points that you can use to unlock new skills. No matter how many you unlock, you can only have a set number of actions and passive perks active on your character at any given time. You can always change the active skills around to suit the situation. The character classes are quite unorthodox, keeping you from falling back on familiar build strategies, and the general focus of their available skills nudges you towards making a team that works well as a unit rather than a collection of assorted individuals. If you can’t beat a boss, you can always try juggling things around to see if you can come up with a better plan of attack. You can also buy new gear and accessories at the various shops you’ll find around the galaxy.

It’s a fairly low-pressure set-up, thankfully. Upgrade points are scarce early on but you’ll eventually have extra points with nothing to spend them on. You also unlock the ability to rebuild a character from scratch later on, so even if you totally mess up you can still change things. Some builds are definitely stronger than others, so you’ll want to experiment a bit with combinations of classes and races especially. My biggest gripe with the skill system is just how opaque it is in the early stages. RPG veterans will probably be able to suss things out by feeling their way around, but some kind of voluntary tutorial really ought to have been implemented for new players. As it is, you have to piece things together by hovering over skills, reading tool tips, and so on. It’s not bad once you figure it out, but I suspect a lot of players will bounce off of it and just try to brute force their way through the game. 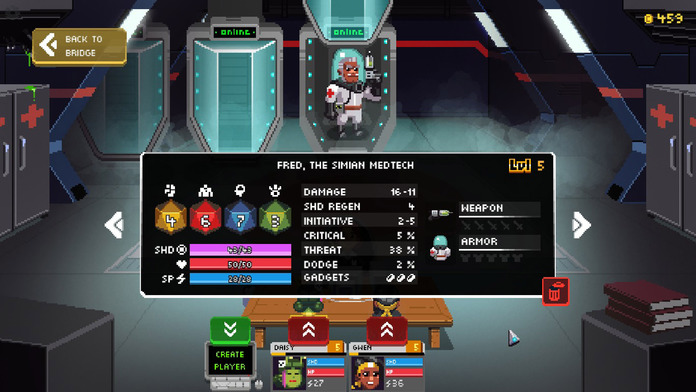 Then there are the bugs. This game has been out a little over a week at the time of writing this review, and it’s already had two updates to address its many issues. Even so, I’m still running into the occasional crash bug or lock up. There’s a really cute surprise at the end of the game, but it would be even cuter if it actually worked properly. It honestly feels like nobody played through the iOS version to completion before sending it out the door, and that doesn’t feel right to me. The developer seems to be dedicated to fixing things, so I hope this will flatten out in the long run, but Behold really needs to be more careful about the state they’re launching their games in. This game is considerably better than KoP&P on paper, but the numerous bugs make it hard to recommend Galaxy of Pen & Paper with as much gusto as I would like to.

Nevertheless, the core design of Galaxy of Pen & Paper represents a solid improvement over the original game. It has more new ideas and executes on them better than Knights of Pen & Paper 2 did. The production values feel a lot higher, too. Overall, you can feel the years of gained experience between the game that made Behold’s name and their return to the brand. I just wish they would allocate more points into their bug-busting and difficulty balancing skills. I suppose it says something that even with its flaws, I still think RPG fans definitely ought to check this one out.