Of all the possible games, series, and franchises that could have been ported to mobile over the years, one of the ones that made the most sense has been a no-show until now. Level 5’s Professor Layton series of puzzle adventures, which debuted on the Nintendo DS in 2007, seemed like a great match for mobile both in terms of its game design and demographic appeal. For whatever reason, however, the platform seemed to get passed over for a mainline Layton game even as the occasional spin-off popped up. Well, no matter what the reason was, Level 5 seems to be ready to take a chance with the latest game in the series, Layton’s Mystery Journey ($15.99). This is a full Layton game in the traditional style, packed full of puzzles, a wild and woolly story, and plenty of tapping on everything for hint coins you’ll never use. 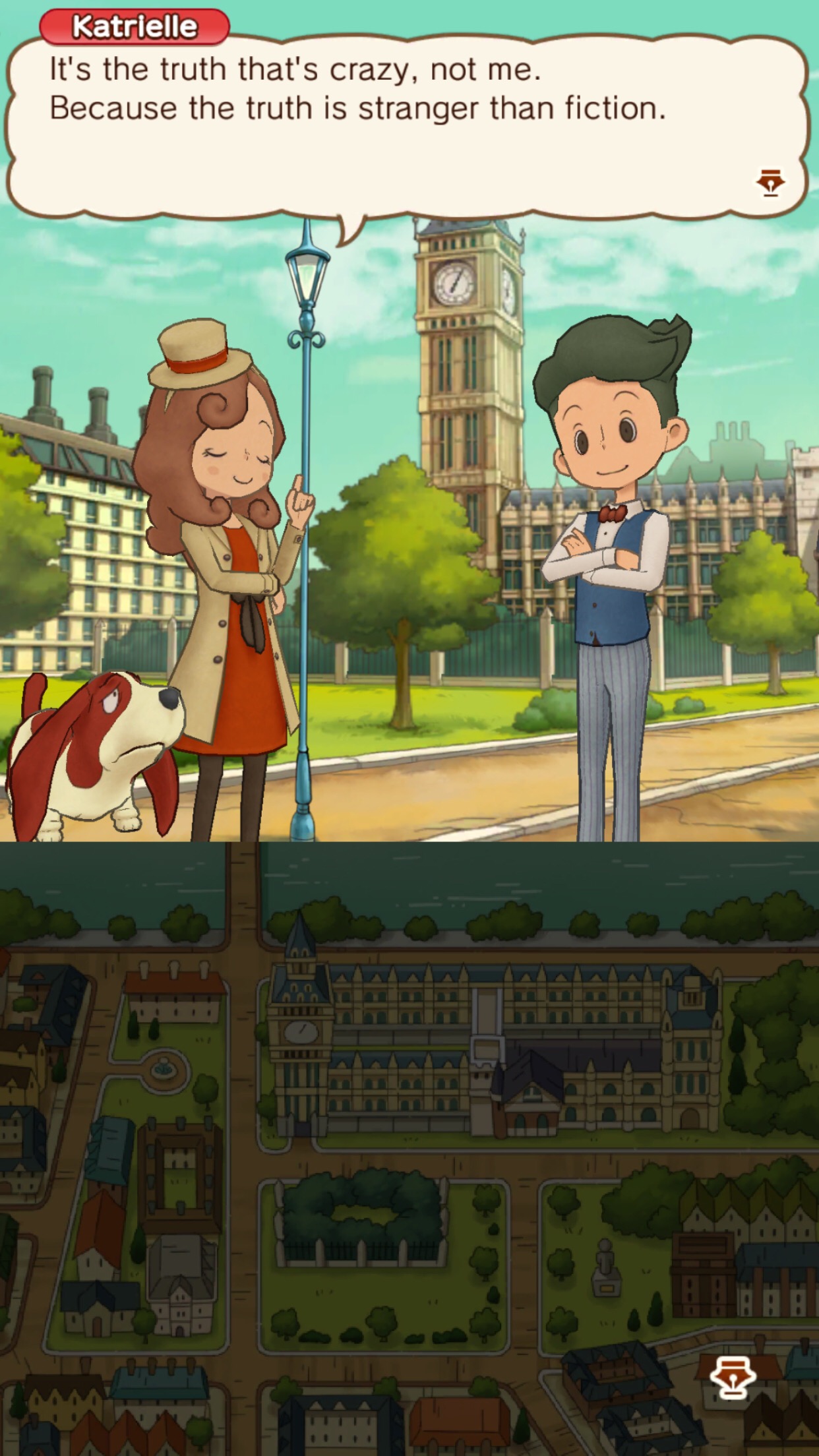 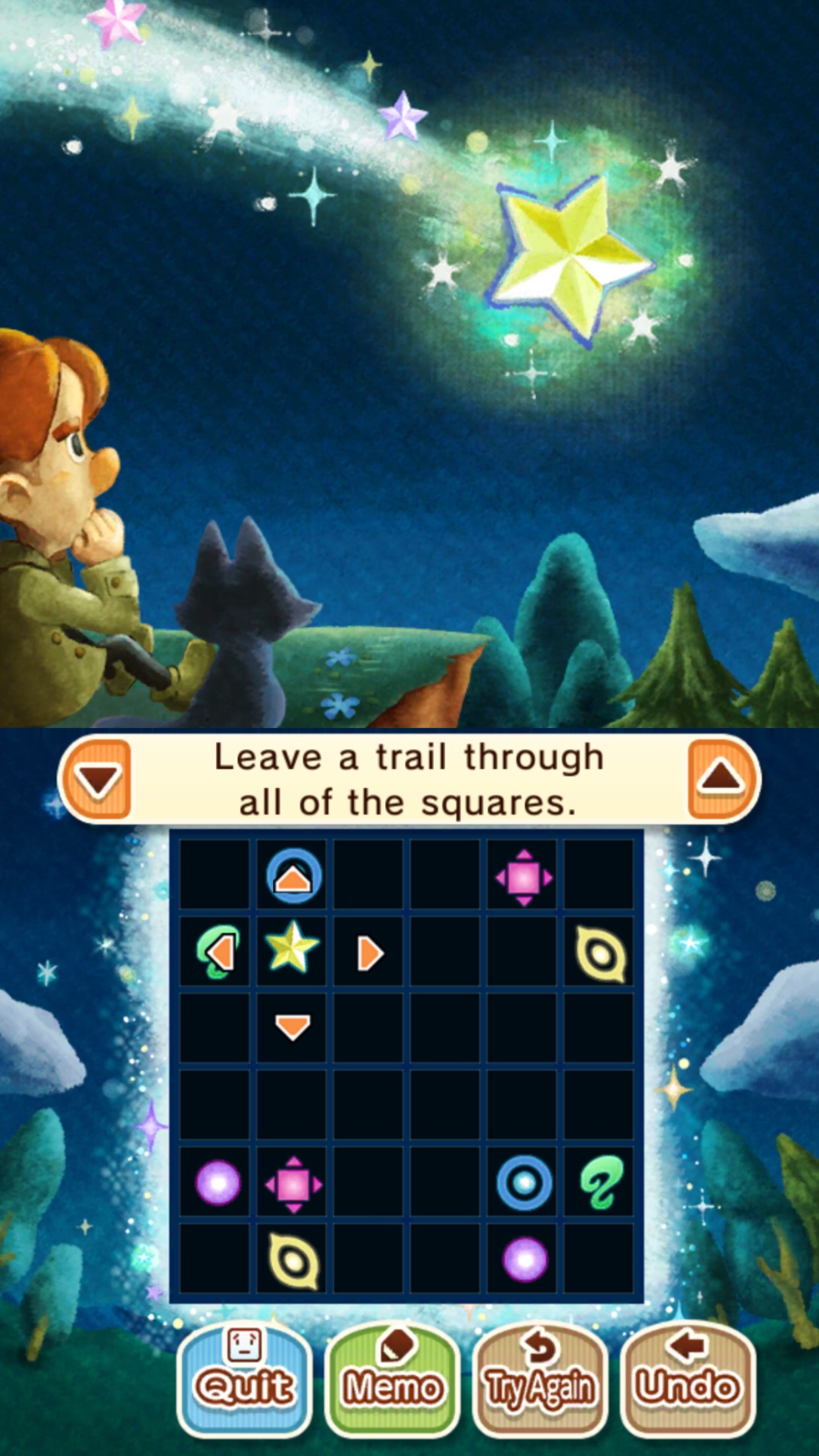 For those unfamiliar with the Layton games, picture a straightforward adventure game where every obstacle is a page torn out of one of those puzzle books you used to find in every gas station. Need to get access to a guarded building? Arrange these matchsticks to create a word. Want to get a broken-down machine going again? Turn on these lamps such that they light the entire board without overlapping each other. There’s a river in the way? Tell me the smallest number of trips you’d have to take to ferry these foxes and chickens across and I’ll help you out. In addition to the mandatory puzzles that move the story forward, there are also a ton of optional puzzles for you to play. Acting as the glue to hold these sometimes disparate challenges together is an incredibly charming, if often nonsensical, tale delivered with a heavy amount of polish.

Series veterans are probably looking at the main character with an arched brow, which is understandable given the last Layton game we got on mobile was more like an Ace Attorney game, with the eponymous Professor barely making an appearance or impact. Rest assured, however, that although the gentleman in the top hat has given up the spotlight for this adventure, the game honors him both in its mechanics and story. This time, our main character is Professor Layton’s daughter, Katrielle. Like her father, she has an eye for mysteries. She also has a hapless assistant, and just to make sure the comic relief flows, a talking dog named Sherl. That dog is one of the focal points of the overarching narrative of the game, but he’s equally important as a vehicle for a vicious assortment of dad jokes. 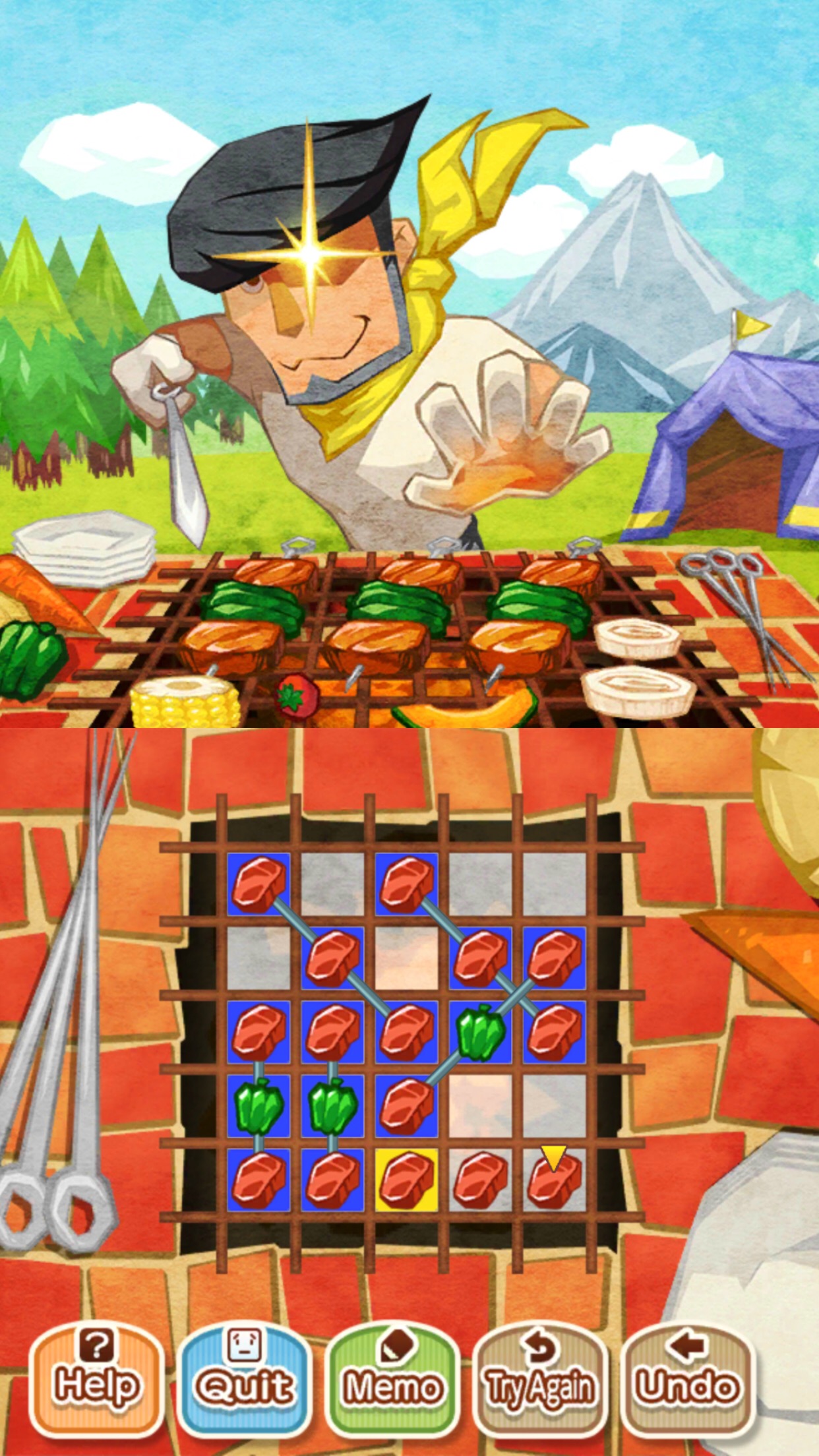 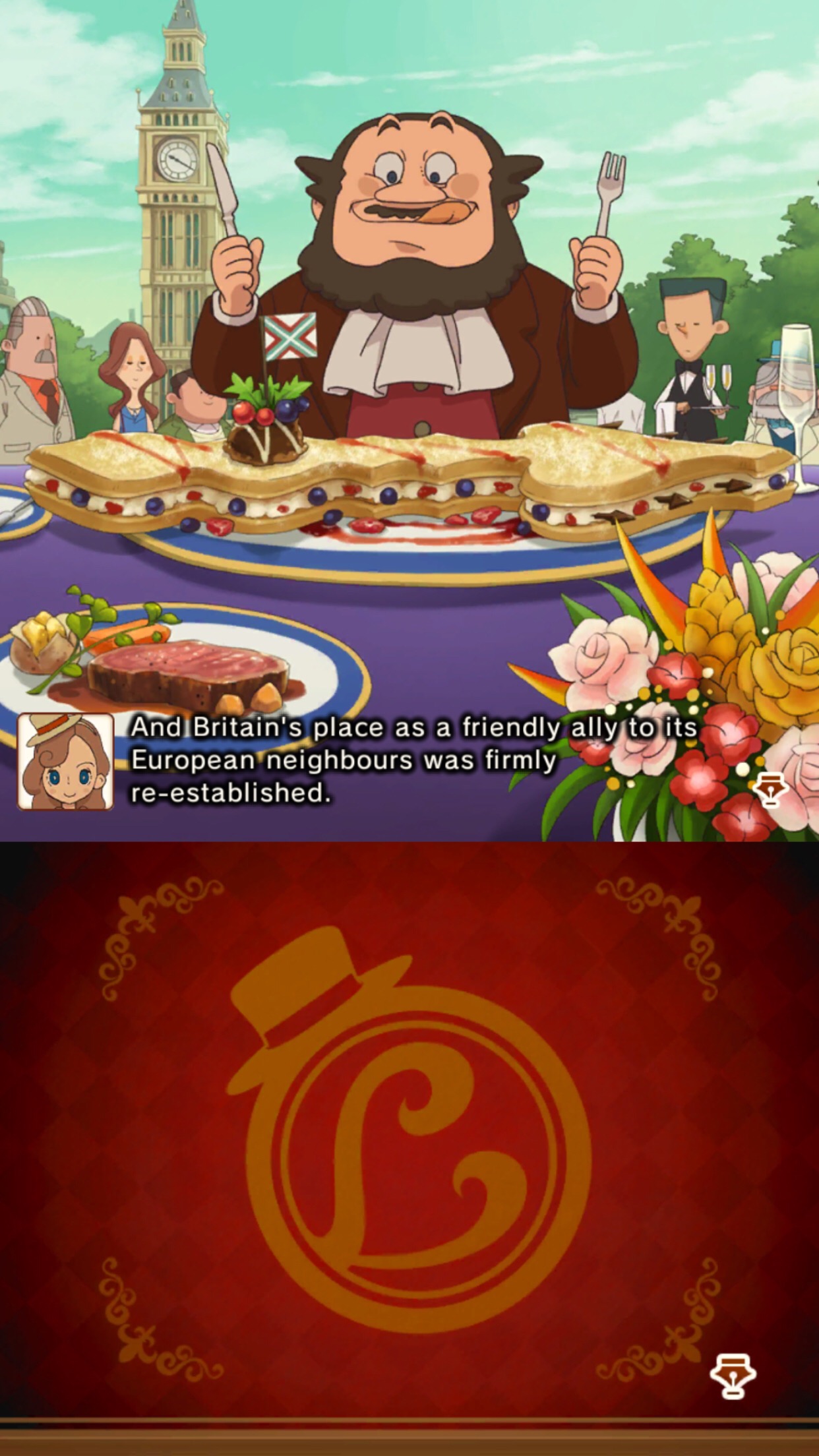 There’s a chance that Mystery Journey may be too familiar to long-time fans, in fact. In spite of the new cast, you’ll still be doing the usual things. You’ll investigate mysteries by traveling from location to location, solving the puzzles you receive along the way. Extra puzzles can be found by poking around in certain spots or by talking to the odd assortment of characters you’ll see hanging around. Solving puzzles earns you a certain amount of picarats depending on how well you do, with certain unlockables tied to having a specific amount of said picarats. The puzzles can take on many forms, but most of them are the kinds of logic puzzles you would find in puzzle books and particularly good children’s magazines. Some involve a simple trick that you just need to figure out, while others may require you to bust out some paper and a pencil to hammer out the answers.

Said puzzles aren’t necessarily tied in with what is going on in the story, either. Their themes are sometimes total non sequiturs. The sheer variety of puzzles is what helps keep the Layton games fresh over the course of what is usually a fifteen to twenty hour ride. The story also does a good job of keeping things moving along, though if you’re new to the series, you should be warned that things can get a little implausible as each game hits its climax. You’ll either find yourself gripped by the drama or completely turned off, and I can’t reliably say which group any given person will fall into. The fact that it’s been nearly four years since the last proper installment probably has even the most cynical of fans ready to let bygones be bygones, at least. 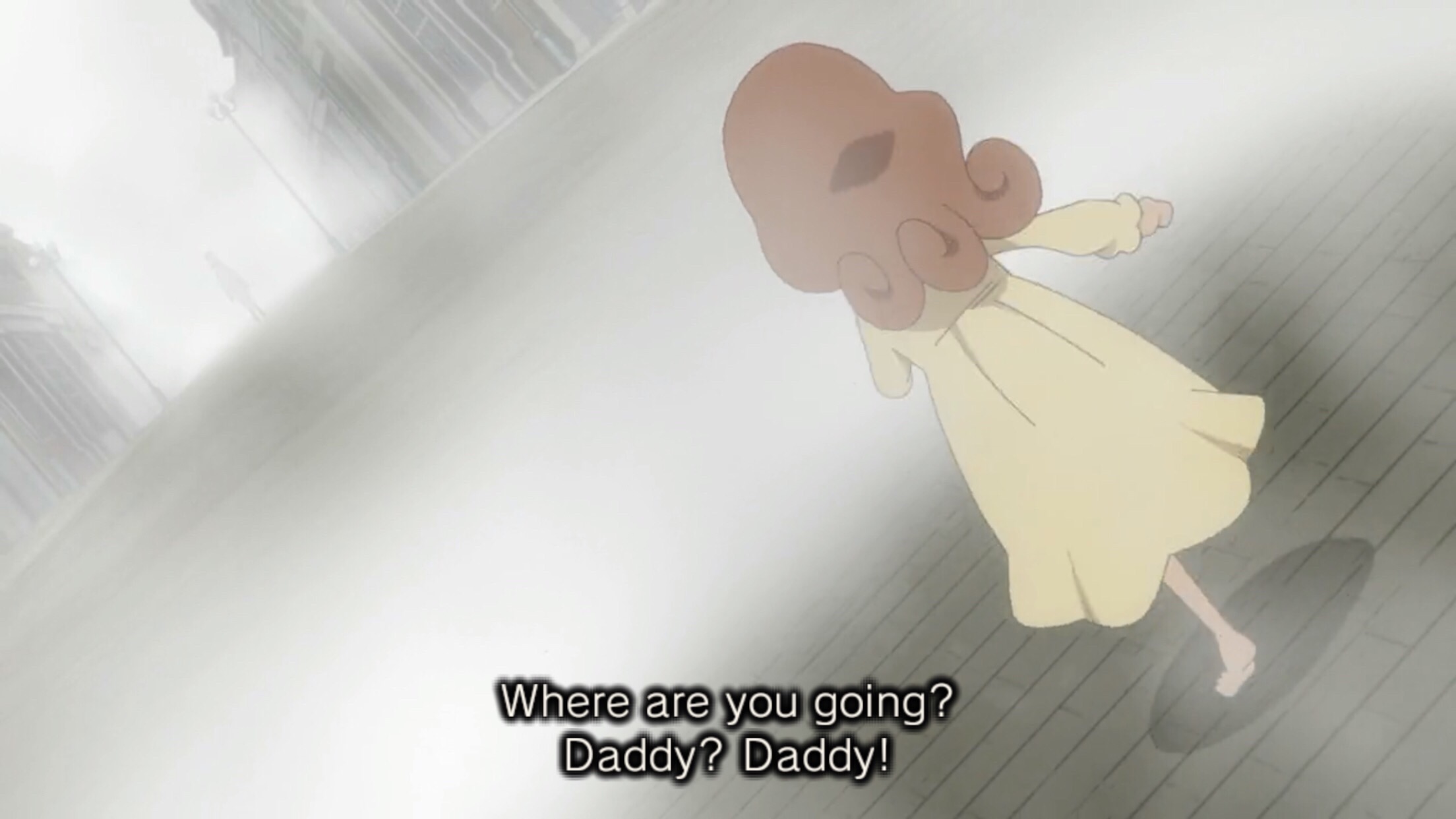 The new protagonist, Katrielle, really is a likable lead, too. She’s just as clever as her father and more down-to-Earth. Her assistant is a hot mess, but he never quite reaches the point where he’s annoying. The talking dog, Sherl, is a love-or-hate affair. Personally, I thought he was great, but if you don’t like puns and/or silly voices, you’ll probably be begging for mercy by the end of Mystery Journey. The script is in general overstuffed with terrible puns and jokes. Along with making use of an impressive array of accents, that sort of thing is the hallmark of the game’s head of localization, Richard Honeywood. Whatever you might think of his quirks, he’s once again delivered a top-notch effort that reads like it was written in English to begin with. The game also includes extensive voice work, most of which is quite good. All in all, it’s the sort of production values you would expect from a major Level 5 release.

In fact, Level 5 has done such a good job with Mystery Journey that I’m having trouble coming up with many complaints. It’s a little annoying how you have to turn your device around whenever a movie starts, I suppose. The main part of the game is played in portrait mode, likely to conform to the Nintendo 3DS version’s vertically-aligned dual screens. The 3DS’s top screen is wide, though, so when it’s time for an animated movie or FMV sequence to play, you have to turn your mobile device on its side so that it can fill out the wider landscape orientation. You can toggle this on the fly so that videos play in portrait orientation too, though they’re much smaller that way. At least the option is there. If you completely burned out on the previous six games in the series, you might find this one to be a little too similar in structure to bring you back around. I personally found the fresh start with the new cast was enough to draw me back, but I recognize that isn’t going to do it for some. 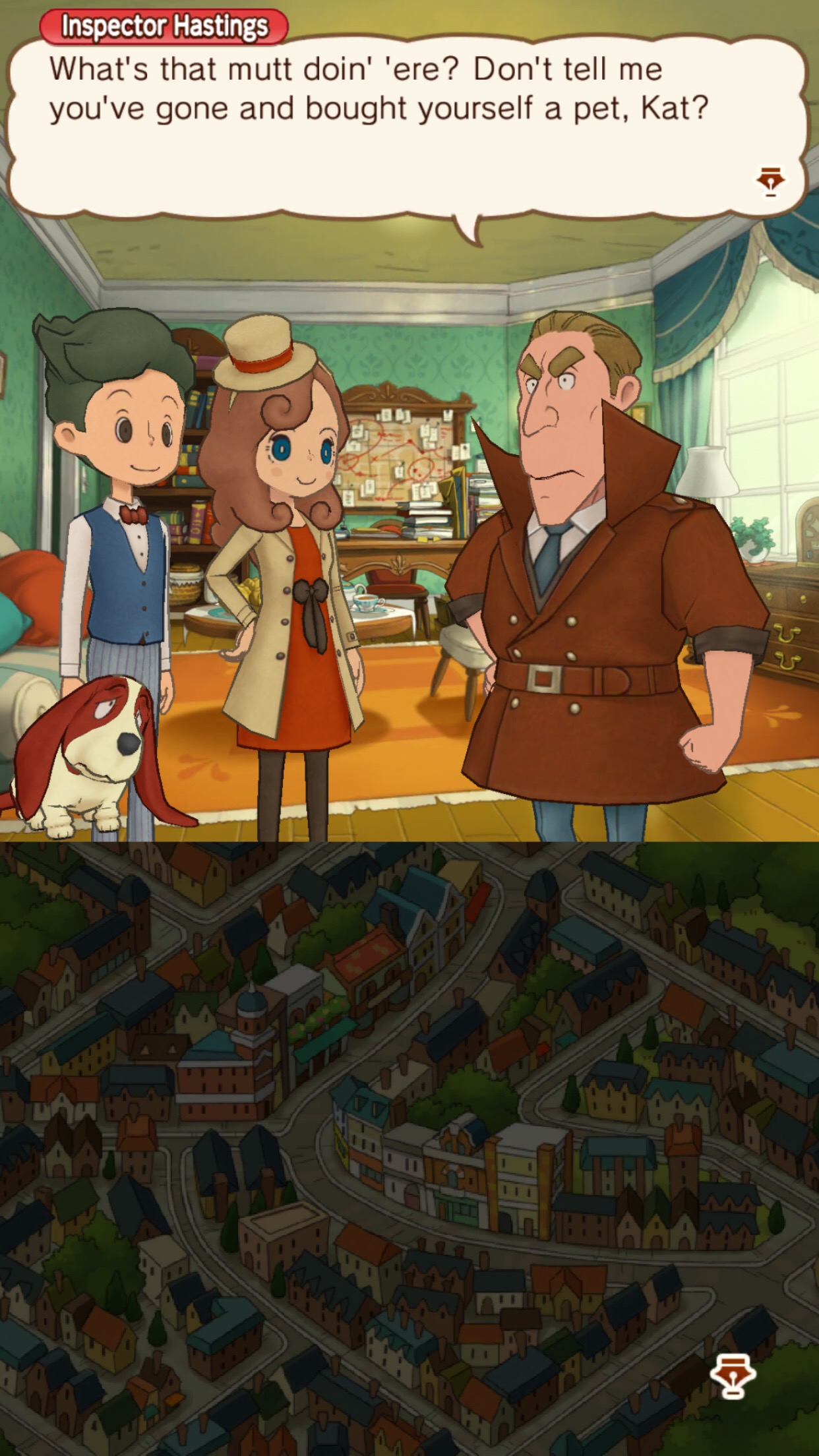 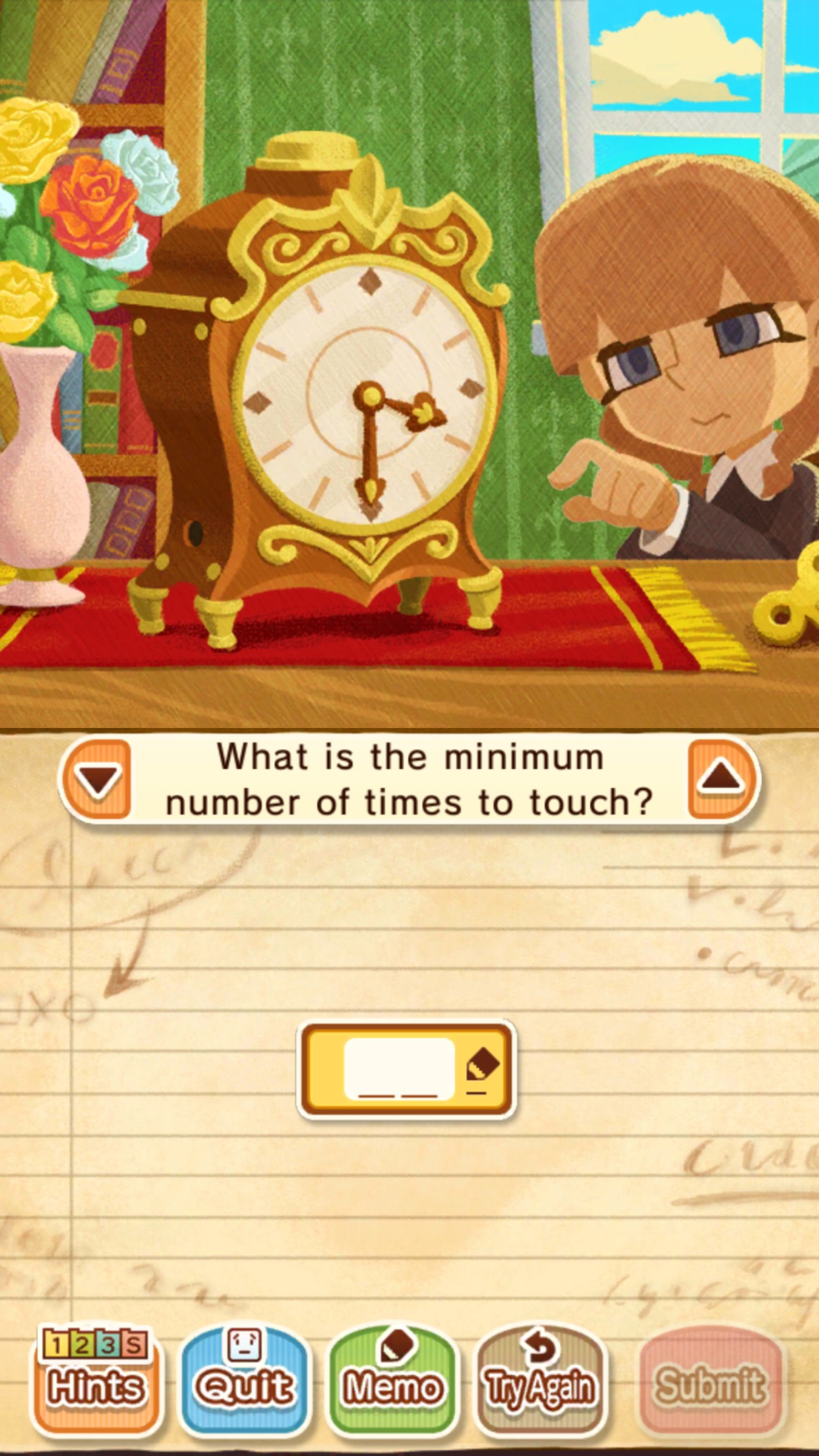 I also suspect that some will take issue with the pricing of the game and its IAP contents. When you add it all up, it’s around the same price that the Nintendo 3DS version sells for in Japan and likely will sell for elsewhere when that version is localized later this year. That’s fair, as it’s a brand-new game debuting across both platforms. But even an inexperienced hand at mobile like Level 5 seems to have realized that an iOS game priced at the same price as 3DS retail software wasn’t going to fly in today’s market, so they cut out some of the extra content, reduced the upfront price, and made the cut content available in packs or a la carte to those who want it.

There are fifteen pieces of DLC available to buy, with two packs collecting the whole lot if you want to save a little money. Each DLC includes one new outfit for Katrielle and a single new puzzle you can play in the Puzzle Room mode. In the 3DS version, these are unlockable through normal gameplay, but you’ll have to pay $1.99 a pop if you want them in the mobile version. I’m not really sure they’re worth it, to be honest. It’s nice that Level 5 gave us options. You can just buy it all and treat it like a 3DS game, buy the costumes you like and enjoy that they come with some new puzzles, or leave it be and get the full story, Daily Puzzle mode, and more for less than half the price that it will sell for on the 3DS. It’s very reasonable, but it’s also pretty high relative to many other iOS games, and Level 5’s track record for updating their apps is not really great.

That all said, I’m here to judge the game as it is, and in that respect, I find Layton’s Mystery Journey to be a must-have adventure. It makes so much sense as a mobile game that I can’t believe it took more than ten years for this to happen. The puzzles are good, the story is interesting, and the presentation is outstanding. Even without buying any of the DLC, the game is stuffed to the gills with content. If this is the level of commitment we can expect from Level 5 on mobile going forward, I’m pretty excited for their future releases. I’ll tip my top hat to this kind of quality any day of the week.