Huijaus Games and publisher Appsolute Games have been promising us Mr. Future Ninja ($1.99), a stylish stealth-action game, and finally it is here. And there it goes. The premise seemed incredibly promising, but the problem is that the game is just too short. Characters and puzzle types get introduced, and then by the time you think they’re done introducing things and ready to start really, really testing you, well, the game is over. It’s a fun experience up until that point, but I just wish there was more of it. 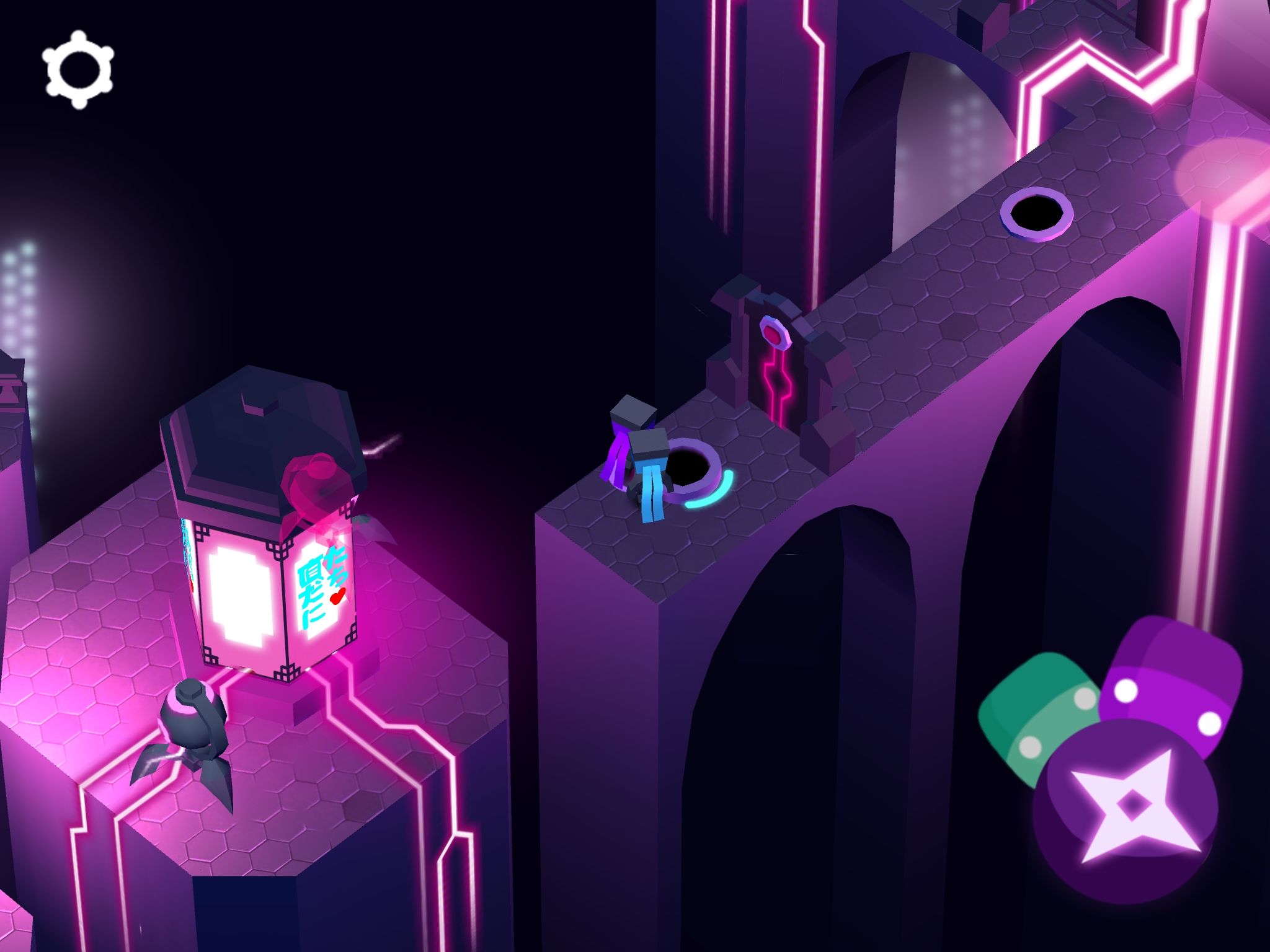 In Mr. Future Ninja, you control three ninjas with different abilities, and can split them off in order to utilize their power to advance through levels. The purple ninja can shoot shurikens to hit enemies and switches from a distance, the teal ninja can dash across gaps (and away from enemies), and the orange ninja can knock out enemies from behind. All the while, you’re trying to avoid detection, as the enemies are very good at taking you out quickly once they find you. The game isn’t too punishing: detection isn’t instant death, and if you have the teal ninja selected, a quick dash can help you get away. Now, you can also split the ninjas off, which becomes necessary for switch-based puzzles. Also, when you have three ninjas grouped together, the final ninja in the line can get hit more easily, and if one ninja dies, the whole trio goes down.

The first third of the game is just you and the purple ninja, utilizing the shuriken for switch-based puzzles and the occasional brief enemy stun or destruction. All the enemies are robots, some of which only are stunned by shuriken, or are even invincible. The teal ninja becomes the star of the show once introduced, as the dash ability is invaluable to certain parts of the game. Purple gets left behind a lot once teal is introduced. Aww. Orange’s stun attack is introduced in the final third of the game, and you have to be kind of behind the enemy to use it, but it’s not too picky. You have puzzles where you have to stun enemies, leave one ninja on a switch, go hit something else, then get your ninja back before the robots wake up. These puzzles are some of the most genius parts of Mr. Future Ninja, as they test your reflexes, and figuring out how to use a trio of characters all together just feels fun, and makes you feel smart for succeeding. 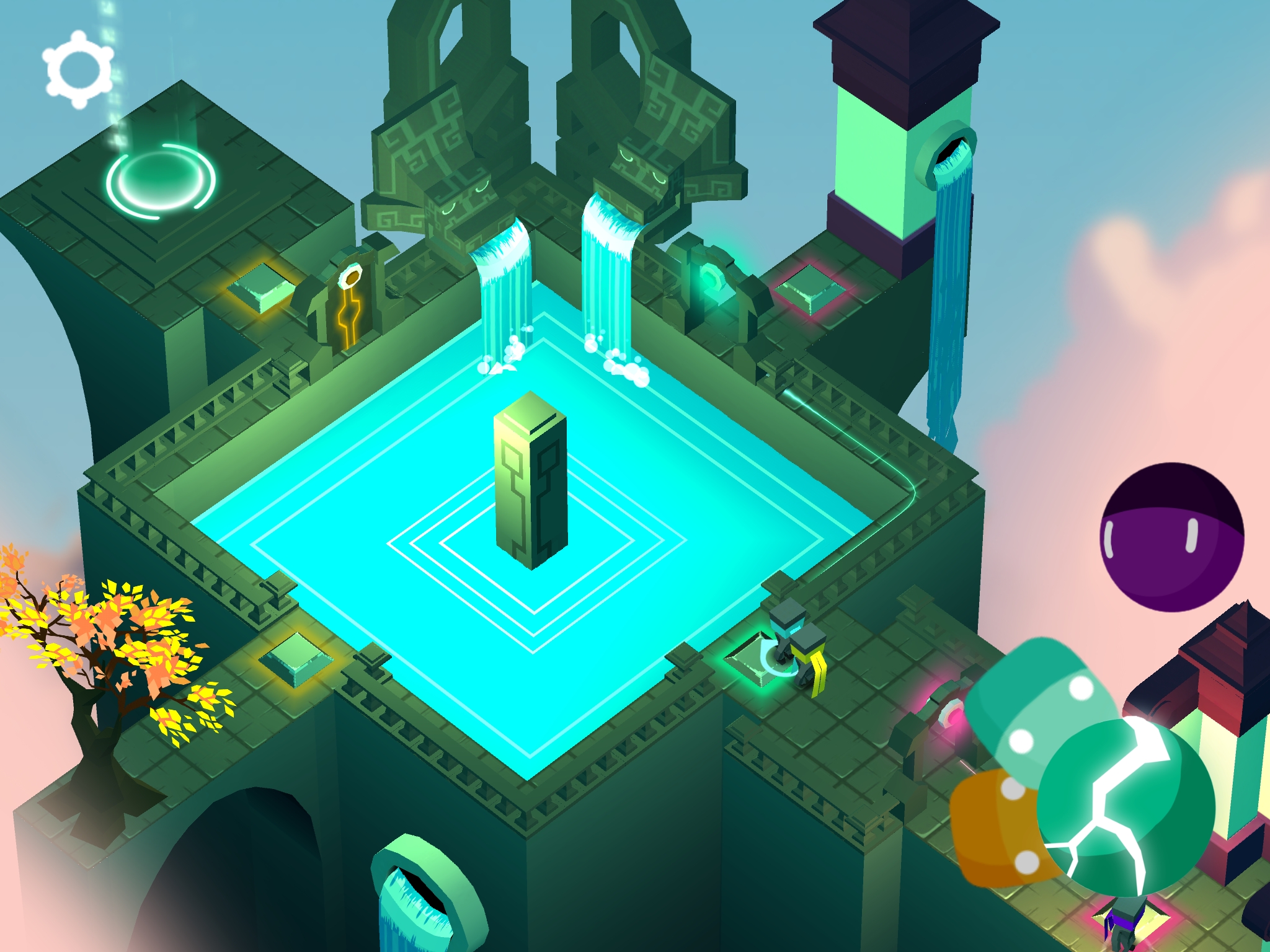 The controls are rather simple: you just have a virtual joystick to move, and then an action button for each character. The game slows down when aiming for the purple and teal ninja, so you don’t have to worry about getting hit while trying to escape a tight situation. You have to pull a ninja from the indicator to split them off, and how this works can be a bit confusing as to which ninja you are still controlling, but never to a terrible degree. Mr. Future Ninja does a good job at keeping its whole concept from ever feeling overwhelming to deal with.

The problem with Mr. Future Ninja is that while the whole multiple-ninja concept is fun to play with, the game is rather shockingly brief. It’s only 19 levels long, and a new main character is introduced and underutilized in the final third of the game. It feels like there’s so much more that could be done with the concept and characters, but instead the whole thing ends on kind of an anticlimax. At least for now, it does: I could see this being a game where there’s the potential for future content updates over time, steadily improving the game. At least, I hope so, because Mr. Future Ninja only reaches a small part of its potential with the three-characters concept. I could see more complicated puzzles with character switching, and more expansive levels, but instead you get the most basic exploration of the mechanics introduced. 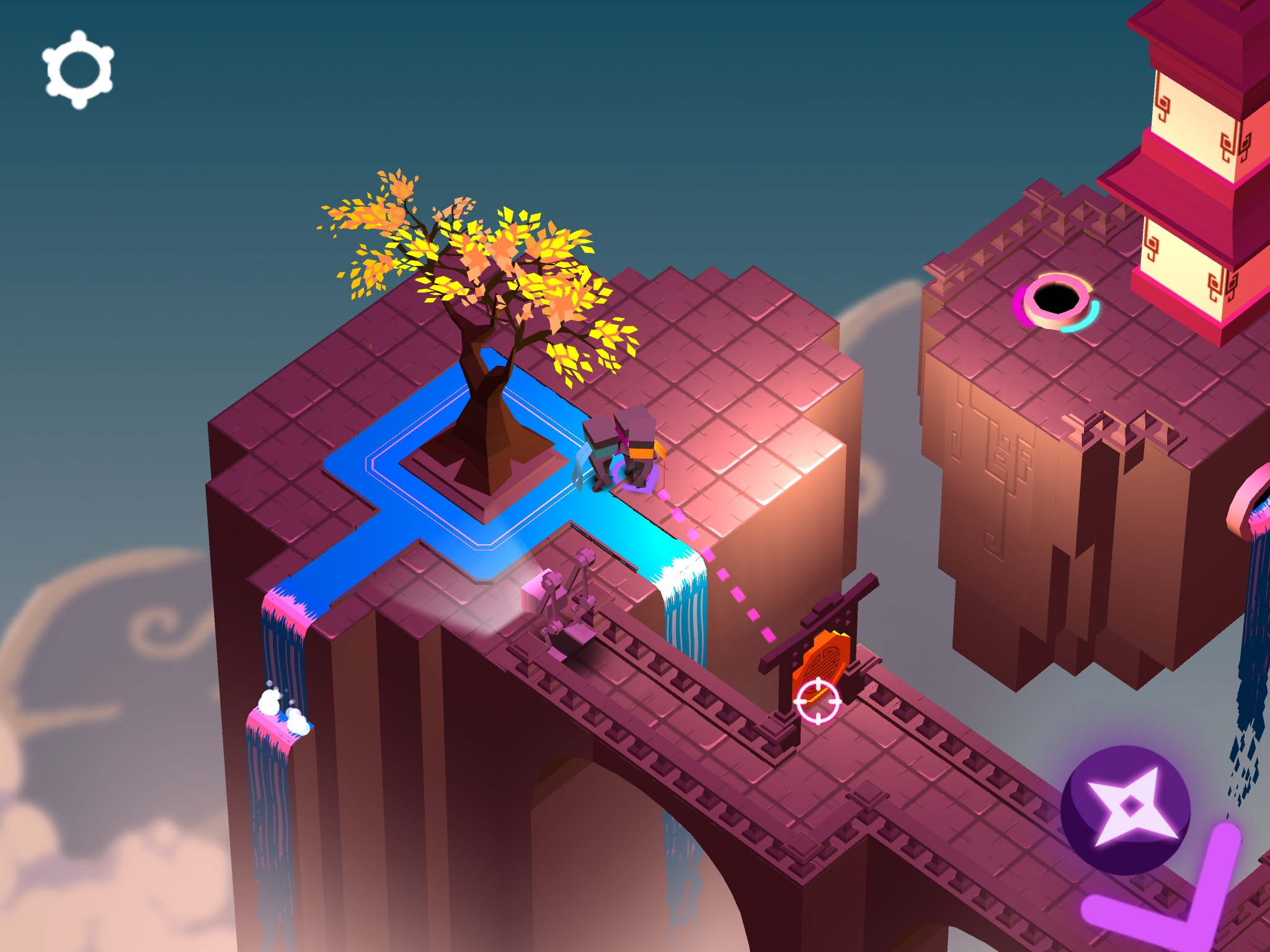 I suppose there’s an interesting conflict here. Why do we want longer games? Value for our money? There’s a case that Mr. Future Ninja doesn’t ‘need’ more levels because it introduces and explores it mechanics concisely across 19 levels. And certainly, there are titles all throughout the history of gaming that have decided to stretch out their content by being difficult, or repetitive. Part of the beauty of having a colossal number of games available to the general public right now is that games don’t have to stretch themselves out unnecessarily. Mr. Future Ninja is, at the moment, a brief experience, perhaps on par with what you’d get from a Monument Valley ($3.99) game. But the mechanics of this feel like there’s more that could be done. And the artistic experience isn’t quite on par with Monument Valley, still the champion of beautiful brevity.

And that’s the problem with aiming for beautiful brevity, I suppose, is that if your game doesn’t quite land perfectly, it’s going to feel a bit disappointing. Mr. Future Ninja isn’t ugly, with vibrant colors throughout, but it’s not quite a visual stunner. It looks a lot better on the iPhone than on the iPad, perhaps due to it looking a bit crisper on a smaller, denser display. On iPhone, where it’s stretched out a bit more, the game looks great. There’s iCloud, so you can compare between the platforms easily. But I don’t think Mr. Future Ninja has a superlative style, it’s just a nice-looking game with some interesting atmosphere. The ending is a bit anti-climactic as well, not quite landing with the powerful punch I think it wanted to go for. The last couple of levels would feel great if they were difficult gauntlets, and made you earn that ending, but they’re actually pretty simple. Again, the problem with beautiful brevity: developers have to be really sure their game leaves a powerful impact on players in the short time they have. And Mr. Future Ninja right now feels like it falls short.

But I say ‘right now’, because the potential for Mr. Future Ninja to be a better game down the road is there, for sure. Add a couple of level packs that crank up the difficulty, and bring some additional complexity to the solid mechanics at hand, and Mr. Future Ninja becomes a must-have. Granted, we live in the launch-well-or-die App Store, but what’s here might be enough to encourage the game to be a sustained hit, as is also true for those who succeed in mobile gaming. I wouldn’t buy Mr. Future Ninja on the promise that it will get future content – I don’t know anything about that yet – but it’s easy to see where it could, and perhaps buying it will be the key to making that happen. The core of Mr. Future Ninja is quite solid, it just needs to be more filling before it’s a strong recommendation.