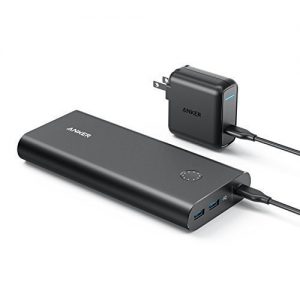 One thing that I think took most Switch owners by surprise is just how quickly it burns through battery, particularly when you’re used to gaming on an iPad which (depending on what you’re playing) can last all (or most) of the day. Comparatively, the Nintendo Switch when playing Zelda lasts right around three hours on battery, which makes mobile marathon play sessions difficult. I’ve got a bunch of different USB batteries, but even the “high power" ones designed for charging iPads couldn’t deliver enough power to the Switch to actively charge it while you’re playing it. At best, they’ll slow the rate that the Switch’s internal battery discharges as the system itself uses more power than the external battery can provide. This was the case across the board, until USB PD batteries began hitting the market. External batteries like the Anker PowerCore+ 26800 PD are capable of delivering the full 18 watts the Switch needs, actually allowing you to charge and play at the same time.

This 26,800 mAh battery backs over six times the capacity of the internal Switch battery, and I’ve yet to be able to hit the bottom of this battery in a single day before I can get back home and charge up both my Switch and the battery again… And I’ve had some marathon mobile play sessions. Last weekend it even had enough charge in it to take turns charging my Switch and a friend’s switch as we played Mario Kart 8 all day. Also, being USB-C, if you’ve got a new-ish MacBook, this battery can even charge your laptop. 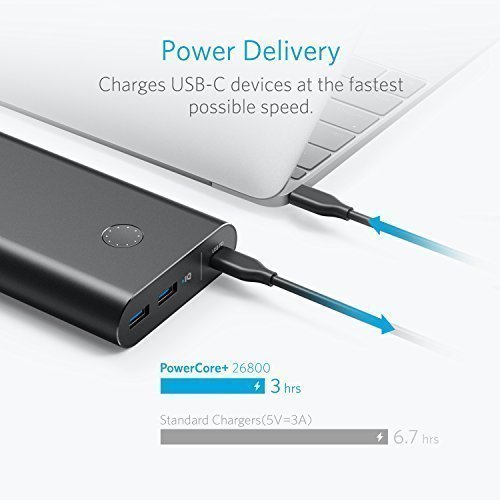 The main downside is it’s pretty heavy. At 1.3lbs (compared to the Switch’s .88lbs with the JoyCons attached) it’s definitely a brick. But, high-capacity batteries with this energy density are always pretty heavy so it’s not like this is a new thing. USB PD batteries capable of delivering such high power output are pretty new to the battery market, so it wouldn’t surprise me if Anker eventually releases a whole line-up of these batteries with lower prices and capacities. A 5,000 to 10,000 mAh battery that doubles (or triples) how long you could play the Switch would be pretty perfect.

Anyway, as we’ve mentioned a bunch of times before, we’re huge fans of Anker accessories in general. They consistently hit the perfect point of being way cheaper than most other accessory manufacturers (particularly when compared to first party stuff) while still being very high quality. I’ve got a bunch of their batteries and have been happy with all of them. The Anker PowerCore+ 26800 PD for the Nintendo Switch (and USB-C laptops) is big, and heavy, but it’s great being able to throw it in your backpack and realistically never need to worry about the charge of your Switch, iPhone, or really anything else that can charge off USB or USB-C.