Hello, gentle readers, and welcome to the RPG Reload Play-Along. Each month, we’ll be playing an iOS RPG together, sharing laughs and tears in equal measures. The post on the front page (like this one!) is basically here to announce the game in question and give a few tips on getting started. The real action will be happening in the TouchArcade forums, where you’ll find a thread dedicated to each month’s featured game. Sign up if you haven’t already, post your screenshots, ask for advice, or just chat about your misadventures with others. We’ve got a great community of RPG fans here at TouchArcade, so let’s make the most of it! As a little incentive, at the end of each month, I will randomly pick one of the participants and send them something small and silly from here in Japan. All you have to do to be eligible is, well, play along with the Play-Along! 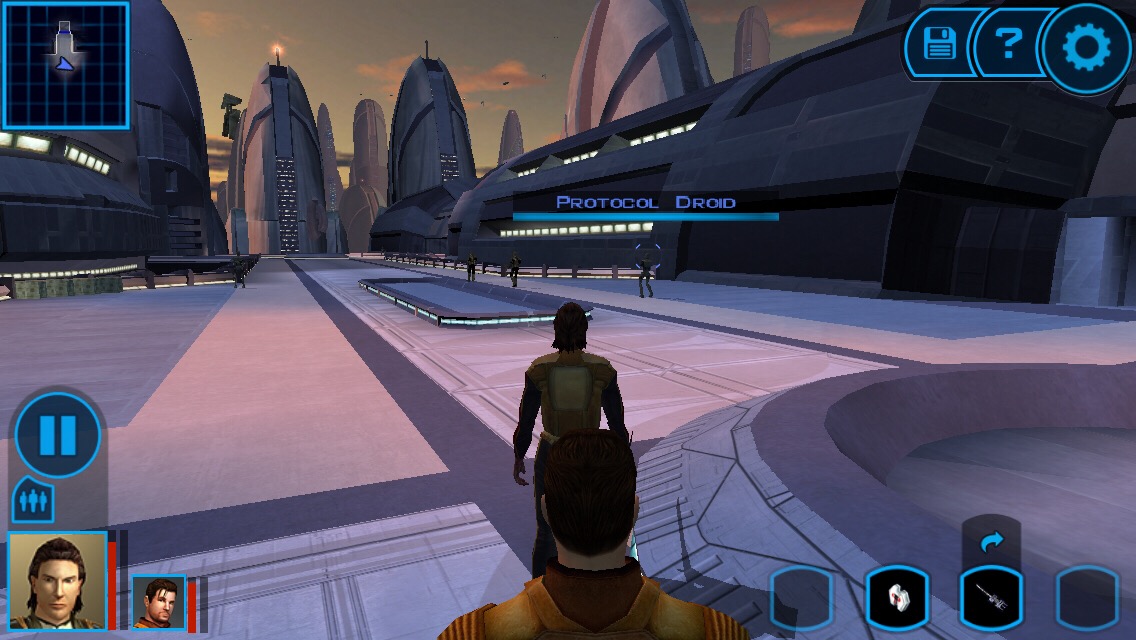 Although April was intended to be a breather month with a shorter game, QuestLord proved to be a tough challenge for many of our Reloaders in its closing sections. Still, a handful of challengers persevered and saw their way through to the end. Congratulations to all who finished, and a big thanks to all who participated in any capacity! April’s winner of a Small and Silly Prize has been pulled from the capricious Magic Moogle Hat after giving it a good shake. This month’s winner is none other than falcon815! I’ll be in touch soon through the forums to get your mailing address, falcon815. To everyone else, a new month brings another chance to win a Small and Silly Thing from Japan!

Forum regulars probably figured this one out already, but when I saw the date this month’s first RPG Reload would fall on, I simply couldn’t resist. Get ready to dust off your lightsabers and make sure you’re all stocked up on power converters, because the May RPG Reload Play-Along is none other than Aspyr Media’s port of Bioware’s masterpiece, Star Wars: Knights of the Old Republic ($9.99)! This is a terrific game with lots of possibilities for Reloaders to go in different directions, which should make for some fun stories in the forum thread. Speaking of which, the May 2017 RPG Reload Play-Along thread is up and running in the forums right now. Pick up the game if you don’t already have it (it’s half-price at the moment) and come say hello. As ever, you don’t need to finish the game to qualify for the Small Silly Thing draw, but I would appreciate at least one screenshot posted of your adventures. 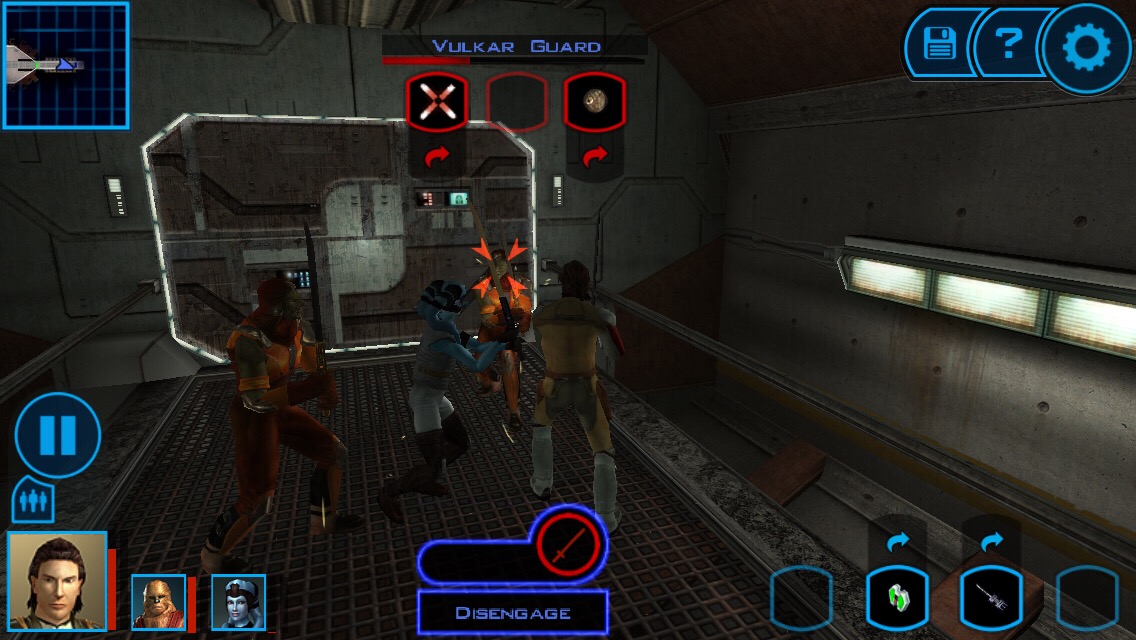 Knights of the Old Republic is somewhat open-ended, and it’s best if you let your personality or role-playing inclinations take you where they may during the course of the game. As such, I’m just going to give you some information about character creation and let you work out the rest of the game on your own. If you run into real trouble, feel free to ask in the thread. I’m sure someone will help you out!

At the beginning of the game, you’ll have to choose a character class. This is a pretty big decision, but don’t stress out too much about it. The game is viable no matter what build you choose. A brief description of each class follows. 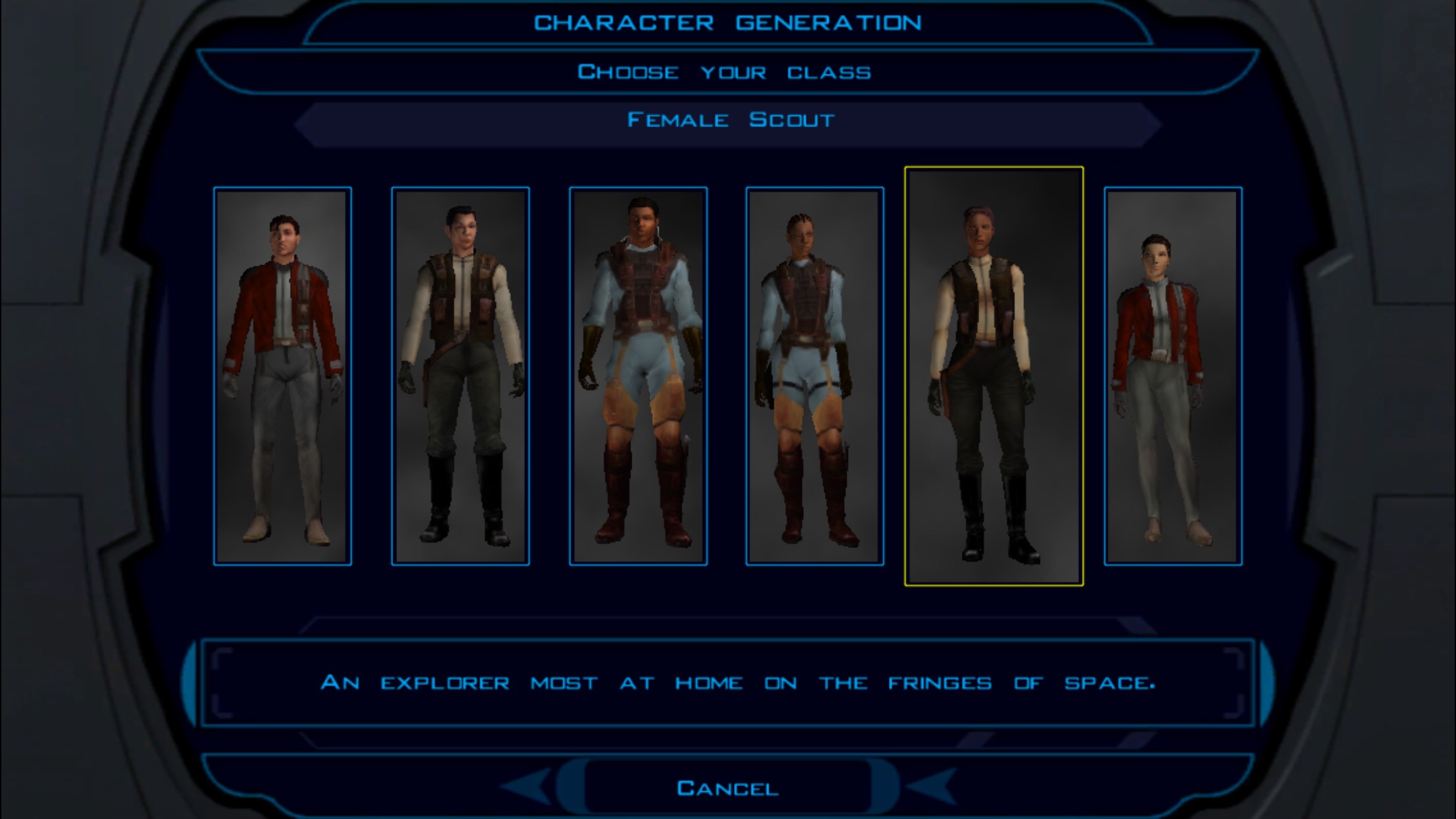 Soldier: This is probably the most straight-forward way to experience the game. Soldiers do well in both hand-to-hand and ranged combat. There are plenty of situations where you’re likely going to have to fight, and soldiers are the best at that. While they’re a bit lacking in terms of other skills, they’re the only class that can reliably get away with running head-first into a brawl. You’ll want to focus your attribute points on Strength, Dexterity, and Constitution. Soldiers roughly map to the warrior class from other RPGs.

Scoundrel: On the other side of the spectrum from the soldier, the scoundrel relies on their skills and smooth-talking to get them out of pinches. If all else fails, you’d best pack a good blaster, because scoundrels and direct melee combat do not mix well. If you choose this class, you’ll want to focus your attribute points on Dexterity, Intelligence, and Charisma. Scoundrels loosely map to the rogue class from other RPGs. If you fancy yourself a Han Solo type, this should be your choice.

Scout: If you’re looking for a balance between those two, scout is your job. This is a class that really shines as it gains levels, as a scout’s melee skills start off a bit weak but soon improve. Initially, you’ll want to stick to ranged combat, but scouts also have access to a decent set of skills that can open up other options besides fighting. If you’re not really sure which class is best for you, scout is the safest choice. It’s flexible enough to support a variety of approaches. You can spend your attribute points according to the style you want to play, but it’s wise to drop points into Dexterity. From there, you’ll want to spend points on Strength and Constitution if you’re leaning towards battling, or Intelligence and Wisdom if you’re not the Rambo type. 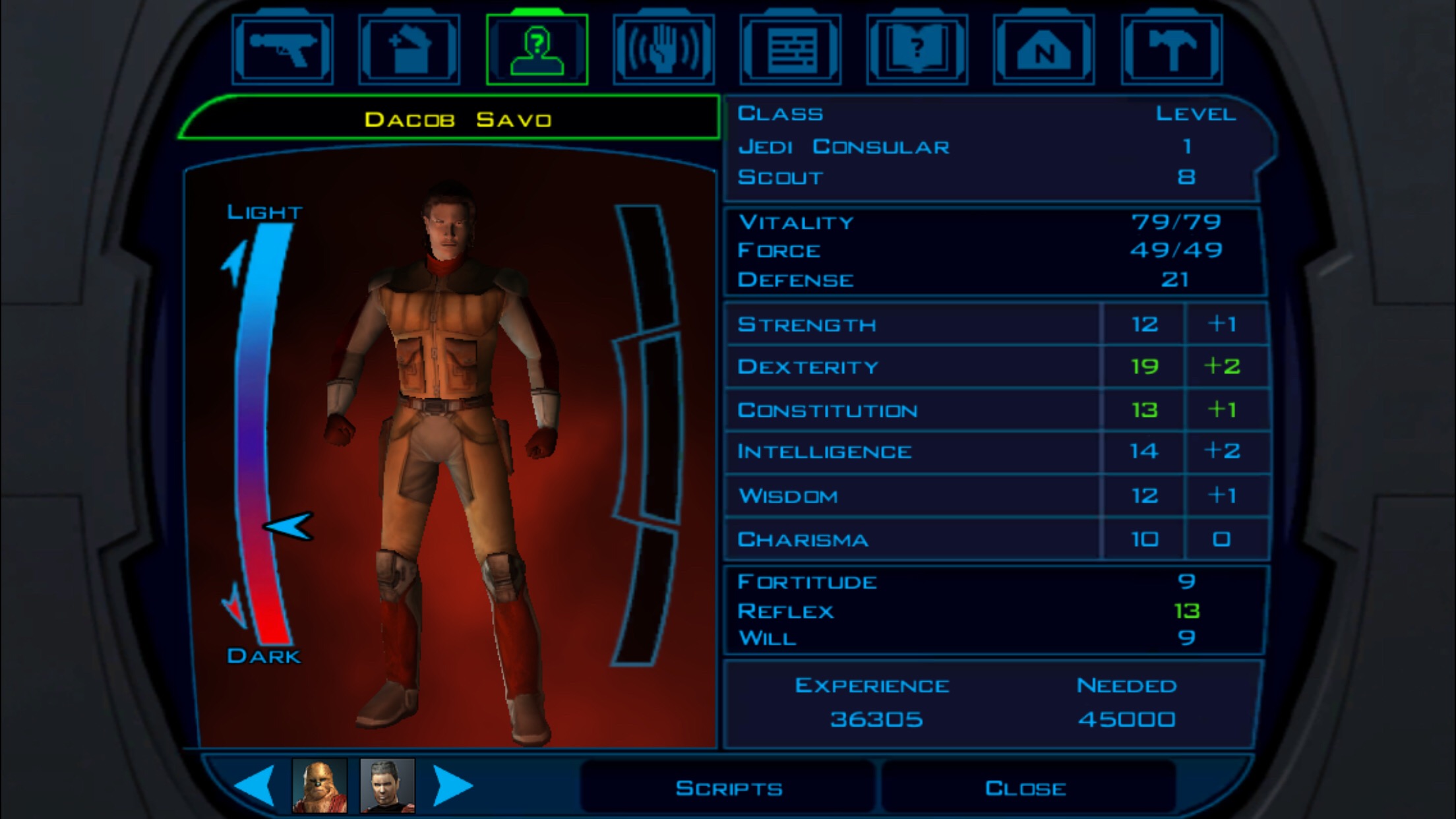 The gender you choose has no effect on your stats or skills, but you will get a very different experience with regards to other characters and how they relate to you depending on whether you play a male character or a female character. 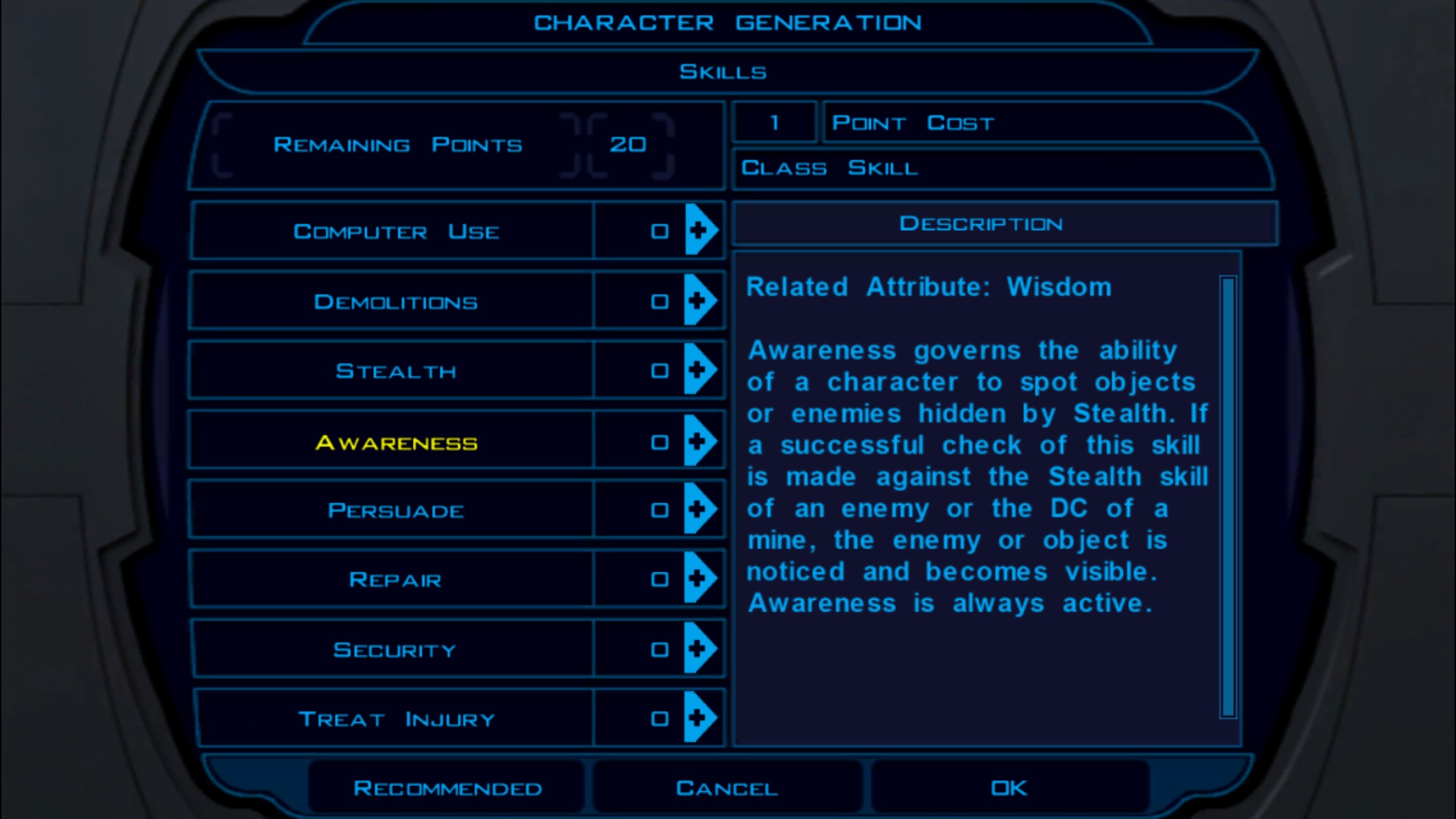 For starting skills, soldiers are advised to spend their meager points on Awareness, which helps you spot hidden enemies or objects. This is very important. If you have some extra points, feel free to splurge on Treat Injury and Demolitions. Scoundrels have lots of points to throw around. I’d advise putting a few points into just about everything except Computer Use and Repair. Do not forget to spend some points on Stealth and Persuade. You will need it. Scouts also get quite a few points to spend. Same idea here. Spend a few points on several skills, but don’t worry about Stealth and Persuade unless you really wish you were playing a scoundrel instead.

As for feats, you’ll start with a bunch depending on your class selection. You can choose one extra one when you start the game, however. You can choose whatever you like, but I strongly recommend spending that point on Dueling regardless of your class. It gives you a +1 to attack and defense if you’re using a single one-handed weapon in combat. Toughness is another decent choice, as it boosts your HP with each level gained.

Please keep in mind as you build your character that you will become a Jedi at a certain point in the game. Yes, spoilers. Why am I telling you this? Because how many Jedi do you see using long-range weapons? Don’t invest too heavily in those skills and feats, is what I’m saying. Speaking of that banner moment, when it occurs, you’ll need to choose your Jedi class, too. Brief descriptions follow. 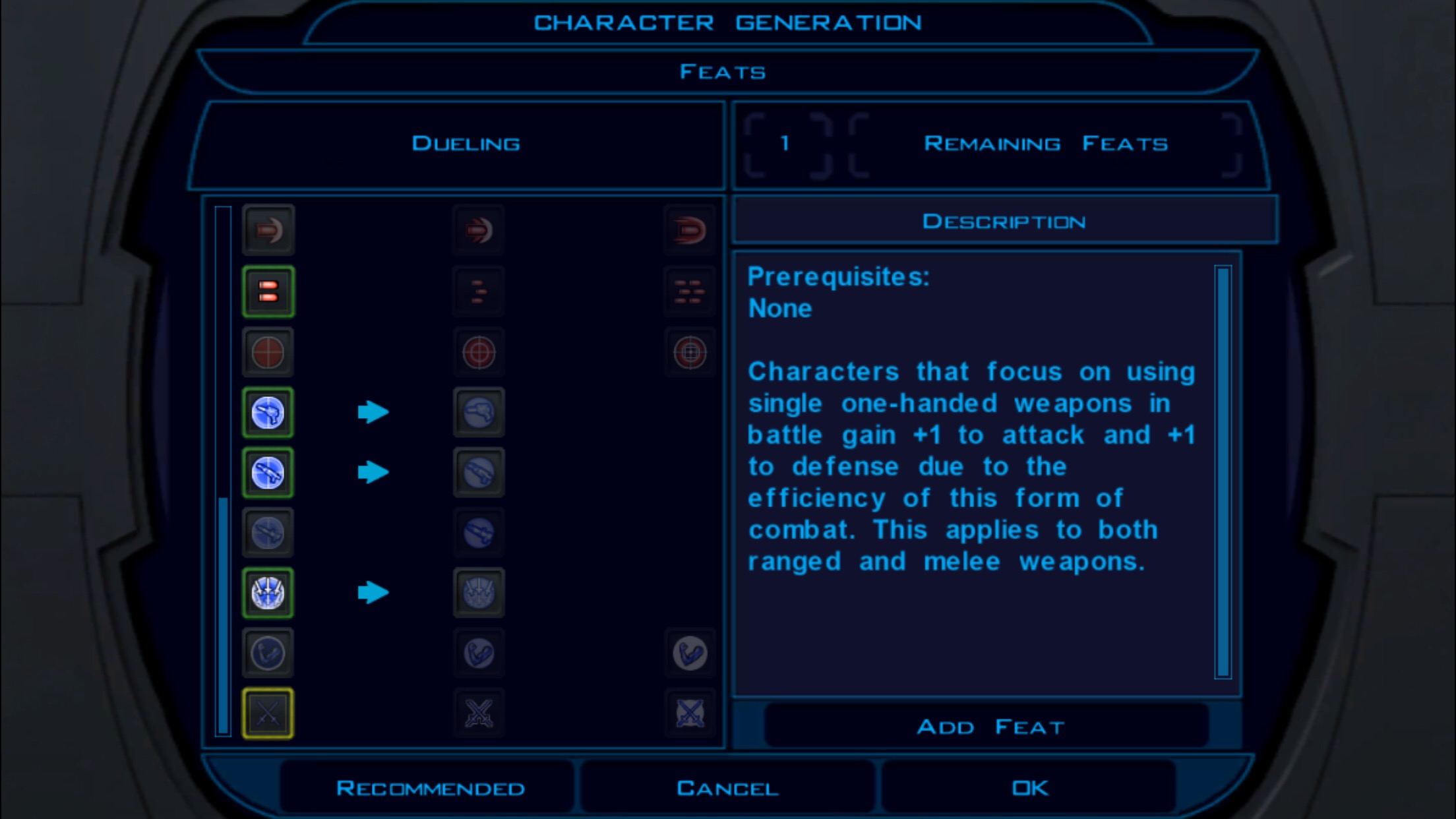 Jedi Guardian: Guardians are all about combat. They believe the answer to most problems can be found at the tip of their lightsaber, and the ones that can’t be found there are somewhere along the rest of the blade. They are the only class that can choose the Weapon Specialization: Lightsaber feat, which grants a damage bonus when using a lightsaber. It’s quite useful. The downside is that they’re not so great with Force Powers. While they get as many powers as the Sentinel, they have to work with a smaller pool of Force Points to use them with. Famous Star Wars Guardians include Luke Skywalker, Anakin Skywalker, Obi-Wan Kenobi, and Mace Windu. Blue lightsaber.

Jedi Consular: More Force Points and Force Powers than the other two classes, Consulars get. Powerful Jedi are they. Strong in the Force are they. Spend less time practicing the Force and more time brushing up on grammar, they must. The names of famous Consulars, you desire? A great example, Yoda is. Another powerful Consular, Qui-Gon Jinn is. Great teachers, they are. Great teachers of teachers, they are not. If seeking to use less direct means of problem-solving, choose this class you should. Green lightsabers have they.

Jedi Sentinel: Sentinels are sort of the middle ground between the previous two. They’re better in combat than Consulars, but weaker than Guardians. They have fewer Force Powers than Consulars, but more Force Points than Guardians. Sentinels are the peace-keepers, so it’s probably not that surprising that there aren’t many of them in the most popular Star Wars stories. A major character in this game, Bastila Shan, is a Sentinel. Kyle Katarn from the Dark Forces and Jedi Knight games is also considered a Sentinel type. Yellow lightsabers. Yes, those exist. 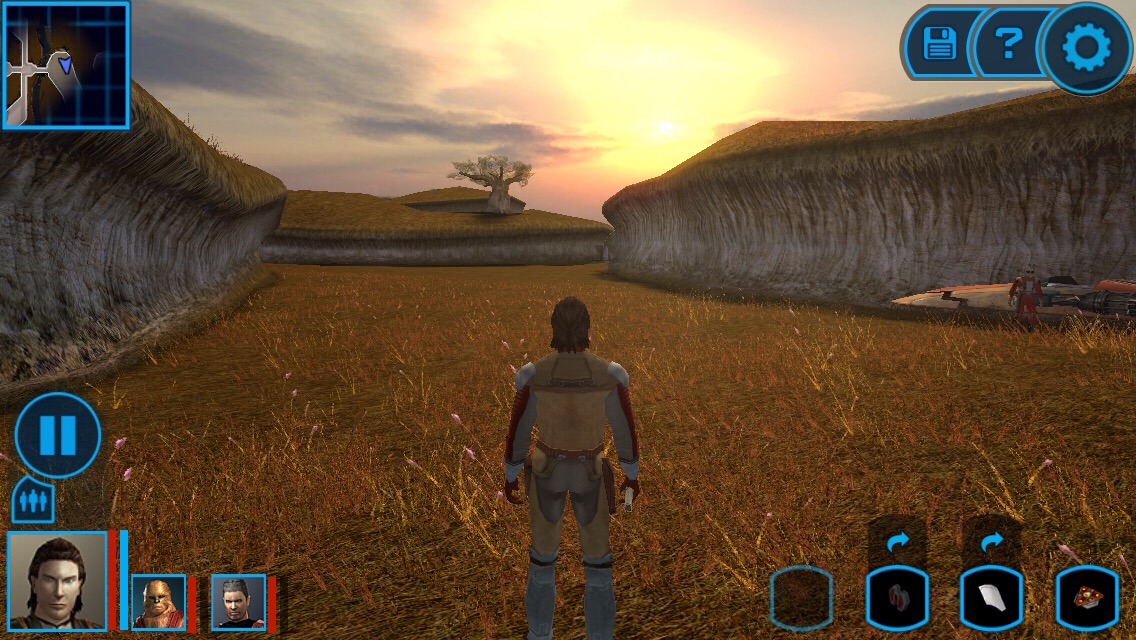 And now for the last question: Light Side or Dark Side? Honestly, play whichever you want. But play it to the max. While you’ll have theoretical access to all powers regardless of your Light/Dark affinity, the cost of using those powers depends on your affinity. So if you’re further towards the Light, those powers use fewer Force Points, for example. As you would expect, the Light Side favors healing, buffs, and other indirect means of support. The Dark Side is all about choking, throwing lightning, and generally putting the direct hurt on people. Using powers of the opposite type doesn’t change your alignment, but realistically, only a Consular is going to have enough Force Points to use the occasional opposite-aligned ability in his or her rotation. If nothing else, playing a Dark Side character is probably easier. Because of course it is.

Anyway, that’s probably all you need to know to get going. Oh, and for those who like to know, the game typically takes between 30-35 hours to finish. Portion your time appropriately! If you have any other questions, stop in at the May 2017 RPG Reload Play-Along thread in the forums. I think there’s some great potential here for fun, personalized tales, so let’s see what you’ve got. I think I’m going to go with a Dark Side Scoundrel Consular this time around. Best of luck to all participants, and I’ll see you in the forums. Oh, and if you want to read about more Star Wars games, feel free to check out my personal site, where I’m writing about Star Wars games all month. Thanks for reading!