AT Games hates you and wants to launch you into a black hole. That’s what my time with Full of Stars (Free) revealed to me. They created an amazingly clever idea, something that takes a simple kind of space chase game as you dodge asteroids and other perils that fly past you. But this is just the core of a larger experience, involving an interactive fiction story that plays into the events of the game, including when you die on a level and try to continue. And then there’s a curious long-term metagame as you try to rescue human survivors, and explore more of the war-torn star system you’re in. The difficulty, excessive repetition, and ever-present monetization drags the experience down, but not to the point of killing the charm of Full of Stars‘ genius core idea. 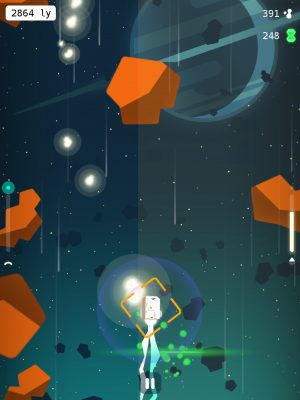 Full of Stars has one of the most unique idea combinations that I’ve seen in a while. Half of the game is the spaceship game. You pilot your ship through deadly asteroid fields, trying to make it to the end of each level. But as you play, you collect idium and idium crystals, currencies that have various uses. They can be used for ship upgrades, but also in the story segments. Much like an interactive fiction game, you’ll be presented with choices that you can make that will impact the events of the game. Sometimes, the choices are random dice rolls, others require certain currencies in order to achieve these aspects. These two segments of the game are integrated in clever ways. One is that challenges you complete get you leadership points, where by completing a level’s achievements, these points can be used to do certain things in the story. Some options may not be available without these points, or they would require risky and/or costly alternatives. The other is that when you die, you have to go through a random event. It’s possible to not lose passengers you have on board, but you have to be lucky or able to pay the cost. 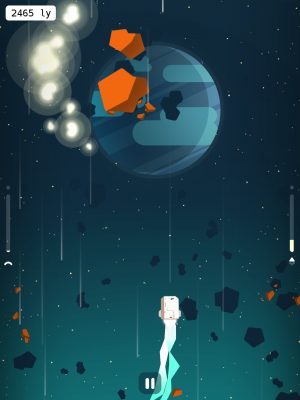 This feels a lot like an FTL ($9.99) or especially Out There ($4.99) kind of space interactive fiction game, just expanded out into a game with traditional gameplay. The choices you make have an actual cost, and while there is randomness involved at some points, your actions and your play have the biggest say. Play better, and less harm will come to your cargo and crew. You can occasionally get into space battles that rely on your resources and some light defensive maneuvers to win. Even some cool story elements that carry across the game with the way its time loop works play out. One space station has a code that has to be entered, and you kind of have to figure it out through trial and error over multiple time loops, or maybe there’s a hint out there somewhere? The permanence of ship upgrades and currencies along with discovered paths means that over time, you get to optimize the paths you take and the way that you play. There is an overall goal with Blue Sector that, once you beat the game for the first time, you unlock and then have to bring as many colonists as possible to this new safe haven. There are also several special characters that have to be found in order to complete certain objectives and upgrade Blue Sector. These upgrades also raise the level cap of your upgrades and make you better-equipped to go into battle.

So how does it actually play? Well, the space sections are fun to play for a little bit. The ship movement has a very loose feeling to it that also feels a bit delayed. You have to tap and hold in either horizontal direction to move that way, snapping back to the center. Dealing with this movement and mastering it is key to success in Full of Stars. Though, it will prove challenging to deal with as you fly through deadly asteroid fields. Oh, and the style of the game grows old quickly as you fly through asteroid field after asteroid field, only occasionally getting a slight change in visuals. It gets very same-y after a while. And similarly, the story sections that happen when you die start to get a bit annoying after a while, as they can be a real resource drain. 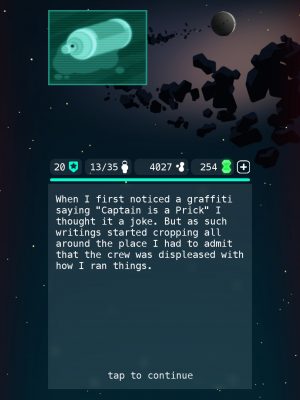 Full of Stars is free-to-play, and the monetization is perhaps stronger than you would think from this sort of game. There is a lives system, and you have to pay $3.99 to eliminate it. A separate $3.99 purchase will eliminate level caps on upgrades. Then, you can buy idium crystals, the ‘hard’ currency (though they are earned regularly in the game, at a rate very similar to what NimbleBit might offer). These are spent on a variety of things, including in-game choices, but also on continues. Now, you can revive without going through a story event 3 times. The first one is 5 crystals or a video ad, but this is implemented in an interesting way, because the ad isn’t seen until after you stop reviving. The game does just go to a dimmed screen if you’ve run out of ad inventory, but you can close out the app and return to right where you were, in a well-implemented and much-requested feature which is lacking in too many other games.

The problem is that the crystal costs can quickly mount up, especially on later levels that get incredibly difficult quite easily. While you could count on some lucky RNG situations to keep you going, and smart crystal spending will get you far, this is a game that otherwise is more than willing to sell crystals to curious players. I wound up buying a couple of $4.99 packs in my quest to beat the game for the first time. Granted, that was on a stream for the game, but it eventually became a struggle against the gods to try and defeat their twisted design. At least the final level is shockingly lenient in that it won’t kick you out back to the beginning. You just have to beat a lengthy, lengthy level that will kick you back a thousand light years or so if you fail a random event or run out of idium, though it won’t send you all the way back to the beginning. And it offers a lot of idium and plenty of opportunities to use your defensive item and overdrive.

There’s a lot of little frustrations that I have with Full of Stars, especially as the charm of the concept of space chaser meets interactive fiction wears off after you continue to fail against the difficulty presented. Still, it’s a game that compelled me to sit down and fight against it to try and beat it. And with the promise of future content teased with additional pilots, and a long-term meta-game as you upgrade Blue Sector, along with the rewarding feeling of beating a tough level, there’s a lot to like about Full of Stars, even if this game wants to beat you down to the core of your soul, too.