Mobile has perhaps been lacking the great Spelunky-like game that could at least imitate one of the best indie games of all time while being something you can play on the toilet while at work. Orangepixel steps up to the plate with Meganoid 2017 ($2.99), the nebulously-named reboot/sequel to one of the solo developer’s earliest works. Where the original Meganoid games, both Meganoid 1 ($1.99) and Meganoid 2 ($1.99), were more challenge platformers, Meganoid 2017 is a procedurally-generated platform that takes a lot of cues from Spelunky. Exploring the Meganoid spaceship, you have nothing but your platforming wits, some explosive charges, and whatever you find as you venture further into the spaceship, taking on a different layout when you die, and you will die a lot. Spelunky 2017 had a rather rapid development time, and while it gets the core gist of the Spelunky formula right, and does some rather cool things, the game suffers from its short development time, leading to a lack of variation in level designs. Also, the game just doesn’t have the tight platformer feel necessary for what the demanding difficulty requires to give the player a good shot at succeeding. 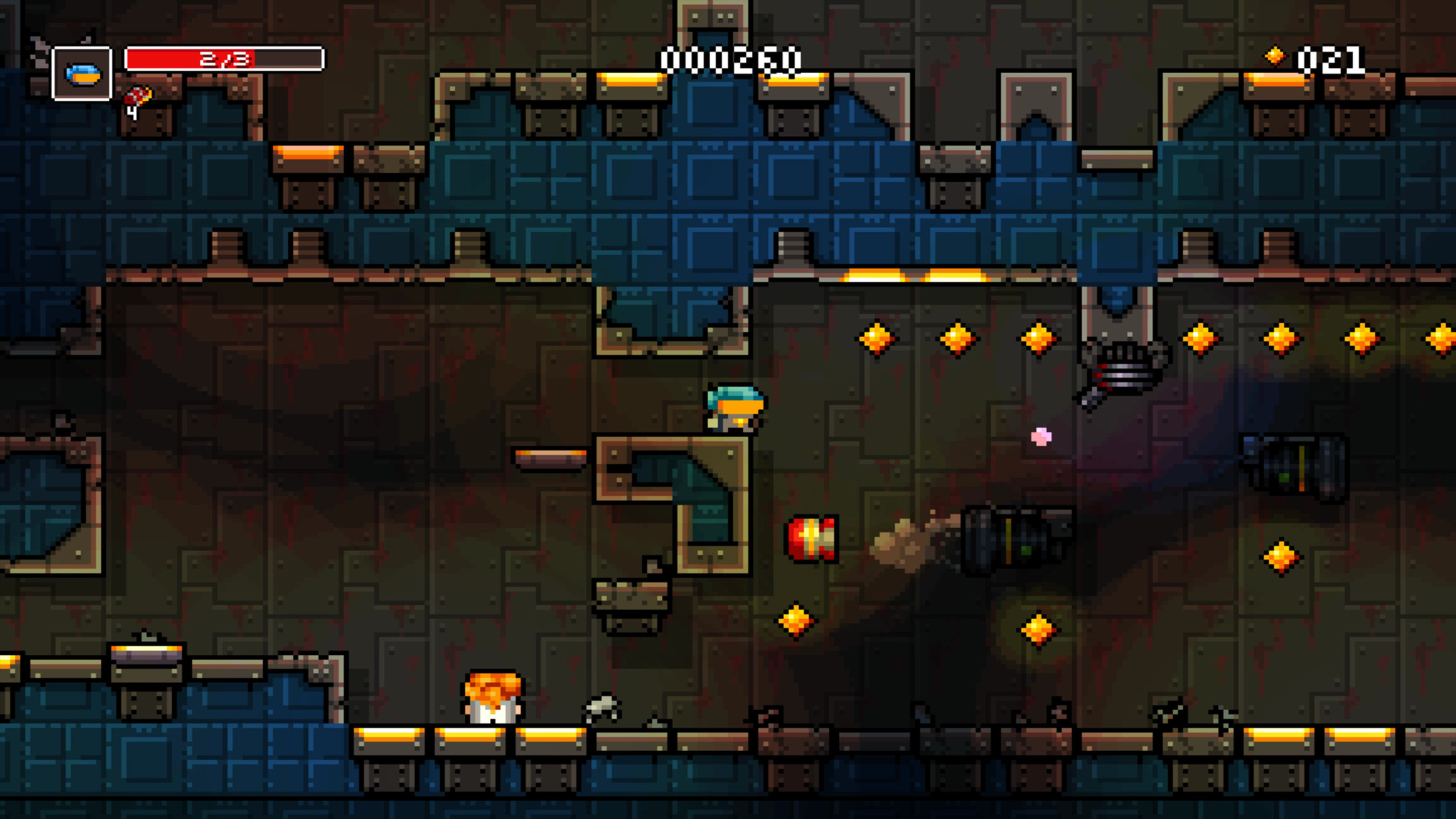 The levels are procedurally generated, and there’s a few rather recognizable chunks that you’ll see. This is fine, as it gives the game a feeling of familiarity that you can recognize. But I do know that there’s one intro chunk where you’re basically trapped if you don’t use a detonator. The game does a good enough job otherwise of making you not feel trapped if you get into a dead end, but at least you have plenty of bombs to help you along the way. Starting out with 8 doesn’t mean that you won’t ever run out, but it does mean that you can be pretty liberal in your usage. You start with 3 health, and while it’s possible to get healing and maximum health extensions, this isn’t necessarily a guarantee. Taking any kind of damage from spikes or traps is ill-advised.

The items you get will have a significant effect on how you play. Some runs are sparser with good items than others. Meanwhile, I’ve had runs where I’ve wound up with a massive arsenal of items at my disposal. The jetpack is the real bringer of doom, because the flames can destroy the guns and lasers that are out to wreck your existence. This item is massively overpowered, and it changes the entire run if and when you find it. Perhaps making it only able to propel you in the air for short periods of time would be better. But it does play a role where it, like some other items, can make each run unique. And there’s some great moments that happen too. Make a tight escape from a dangerous trap when low on health, and the feeling is palpable. Dodge dangerous electric bolts and feel like a wizard. Finding secrets feels great, too. Some of them require things like the classic visor, or just having the right item in a run at the right time, but it’s nice to know that those elements are there. 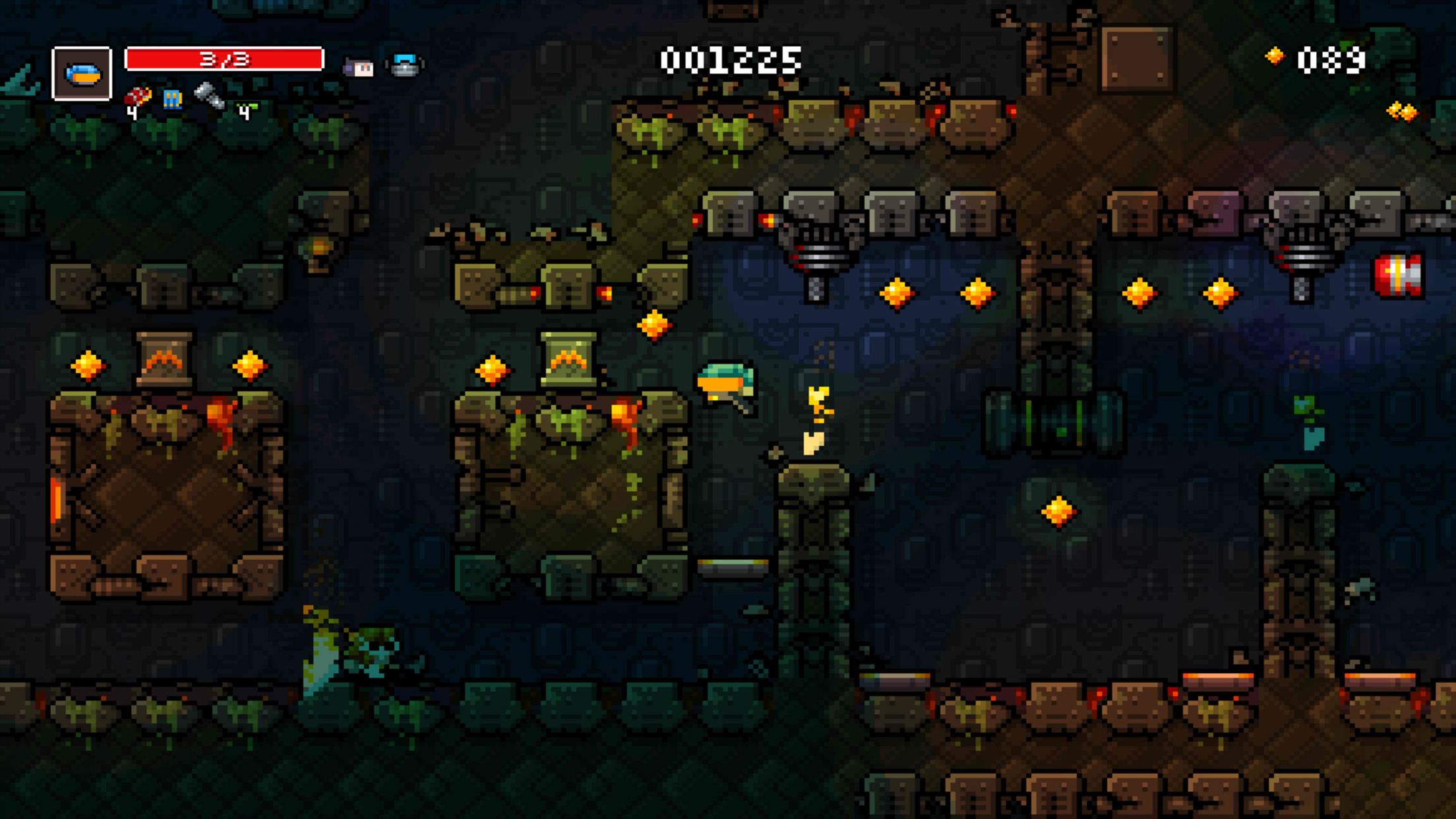 The lighting is fantastic in Meganoid, which it has been in Orangepixel games since Space Grunts ($3.99). It does play a role, as some levels wind up being much darker than others, and you have to use glow sticks in order to make the level visible. It’s just a cool visual flourish that makes this game look quite good, to go along with Orangepixel’s typical chunky-pixel visual style.

The touch controls are pretty standard Orangepixel fare. They work fine, though the issue is that if you mess up and accidentally hit a wrong direction or the wrong action button, you could accidentally find yourself in danger. And the problem is that this is not a game like Gunslugs 2 ($1.99) where there’s lot of health pickups that make the game feel elastic to go along with the loose feeling that the game otherwise has. Here, that feeling of looseness is a problem because the game is so unforgiving. 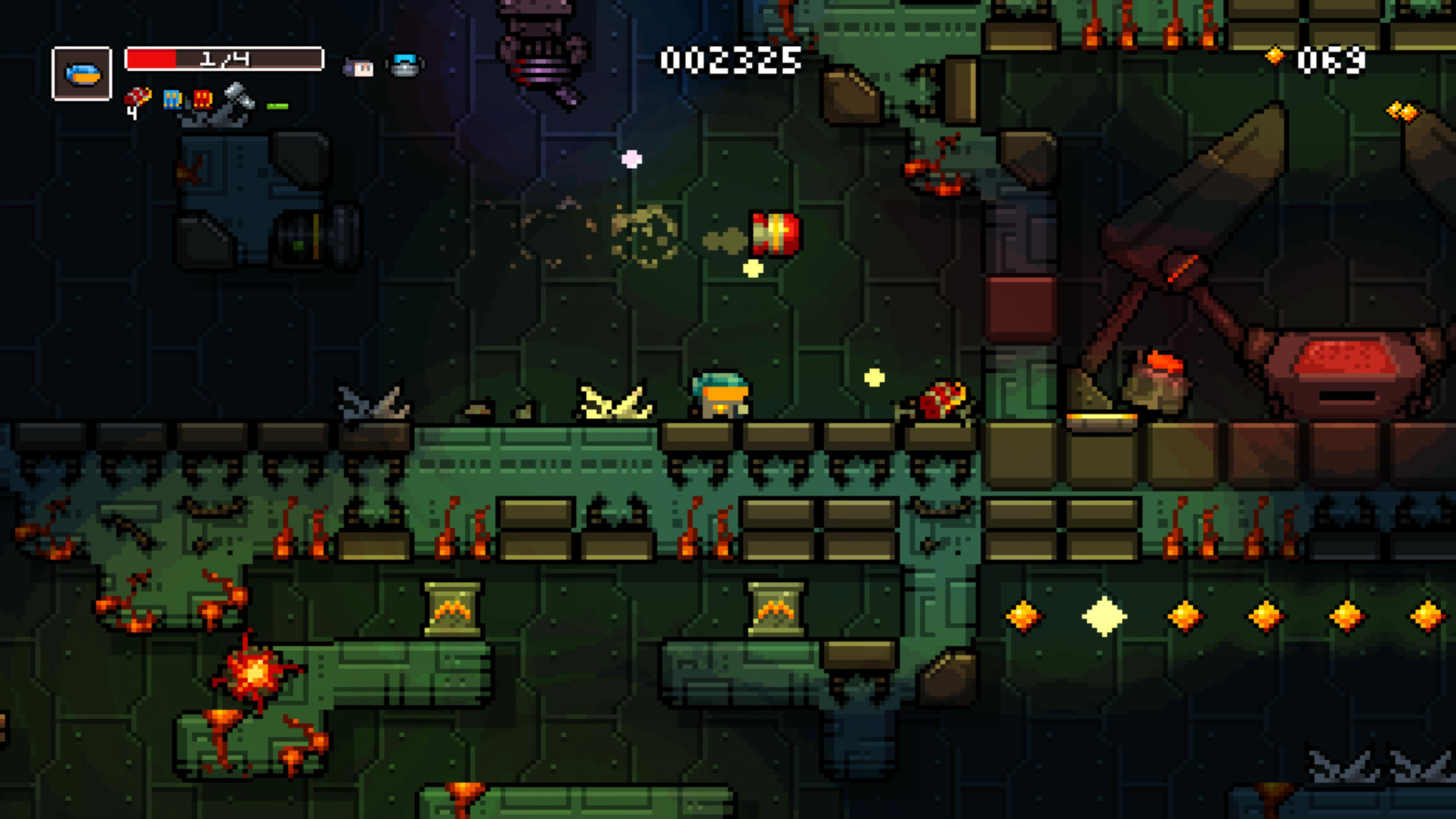 Thankfully, Orangepixel has thrown in MFi controller support for the game. I think the experience is a lot better when you have physical buttons. A game like this that relies on tight platforming and precision control because there’s not much margin for error really shines more with physical controls. If you can, that’s the best way to play. The one thing I wish the controls would have would be an option to swap left and right between items using shoulder buttons instead of just having to tap the item button. Also, why is jump not set to A? We live in a civilized society, we haven’t come all this way to not have A be the default jump button!

The problem with making a Spelunky-lite is that Spelunky is a tough game to imitate. It was developed over several years by Derek Yu, and it required both the free PC release along with the later Xbox 360/PC/etc. versions to make it get to the point that it became game designer pornography. If you come at the king, you best not miss. Now, there’s obviously the mobile filter that I would apply to Meganoid where Spelunky isn’t going to be a mobile game. It’s made for physical controls, and there’s a precision to the game that just can’t really be adapted in the same way. I hate bringing this up in the context of mobile games, since the platform gets way too much nonsense from people who haven’t spent enough time with touch controls to realize that as you get used to the lack of tactility, you have a better feel for these games…and there’s a generation growing up that has touch controls feel as natural to them as playing first-person shooters with thumbsticks feels. But, there is a certain degree of precision on the outliers that really doesn’t work all that well on touchscreens, or at least the lack of tactility reveals major flaws. Meganoid to me is one of those games. Combine that with the fact that this is a quickly-made project, and it just can’t live up to the lofty heights of the game that inspired it. It’s a thoroughly okay game, but there’s not a lot like it on mobile. Perhaps that’s for a reason?