Riverman Media has delivered two excellent titles in a row with Pizza vs. Skeletons ($2.99) and The Executive ($2.99), and they deliver again with MUL.MASH.TAB.BA.GAL.GAL ($2.99). Somehow, they’ve taken Pong, and turned it into a chaotic action game where you’re trying to stay alive while enemies try to ascend the screen, and you’re there trying to manage multiple balls, paddles with special abilities, and all manner of powerups. It’s a chaotic game, and a remarkably engrossing one. 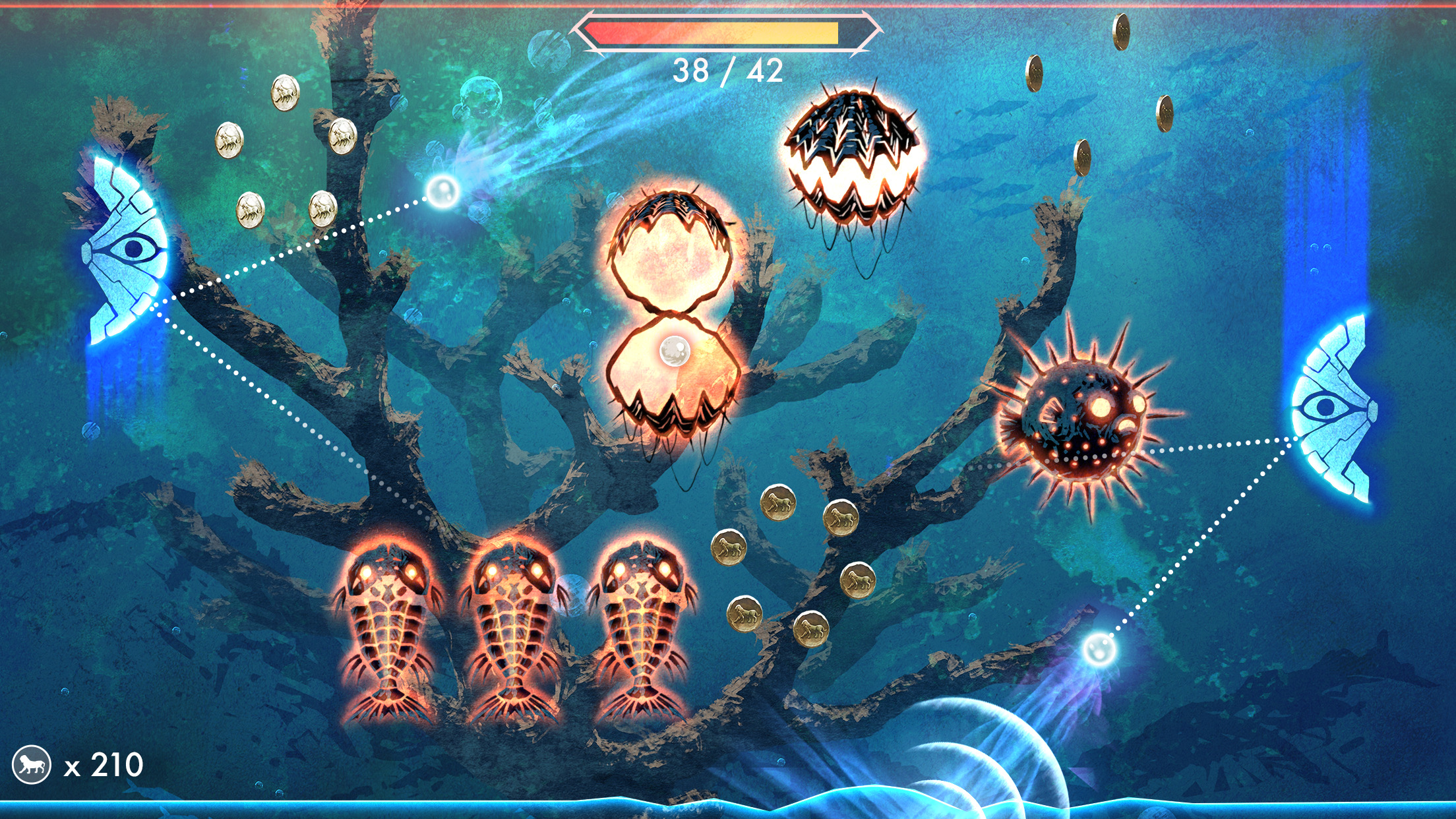 You’ve played Pong or a game like it before, so you know how bouncing the ball between two paddles works. MUL.MASH flips things on its head by being a game about bouncing a ball between two paddles facing each other horizontally, and then having enemies ascend from bottom to top. It’s the challenge at the heart of the game, because you constantly have to play angles to hit enemies. Bouncing the ball off the top and bottom can help you hit multiple enemies in one go, particularly handy for the boss fights. Yes, there are boss fights, as you constantly ward off enemies through multiple levels, progressing deeper and deeper into the game. As you play – and eventually fail – you start to unlock paddles with various effects, such as shots that fire after so many hits, paddles that heal you every so many shots, or even just different-sized ones. You do have a say in how you approach the challenges of this game.

MUL.MASH is a game where you have to start over from 1-1 each time you play it, with levels that have common sets of enemies, but aren’t the same every single time. You earn coins from playing, and these can be spent on health boosts and upgrades between rounds. The thing that you have to keep in mind is that health purchases get more expensive the more you buy them, and you can find health while you play, so it can be a risky purchase in the long term. The other thing is that you really want to not lose balls if possible, because you get 2 coins per number of hits on a particular ball, though any balls beyond your ball with the best combo are taken away at the end of a round. So, keeping balls in play can get you a lot of coins over time. Losing all balls isn’t good, but it isn’t terrible: you just have to wait a few seconds for it to launch from your left paddle. In fact, in a tough situation, getting a straight shot at a target that might soon ascend off the screen can be helpful! 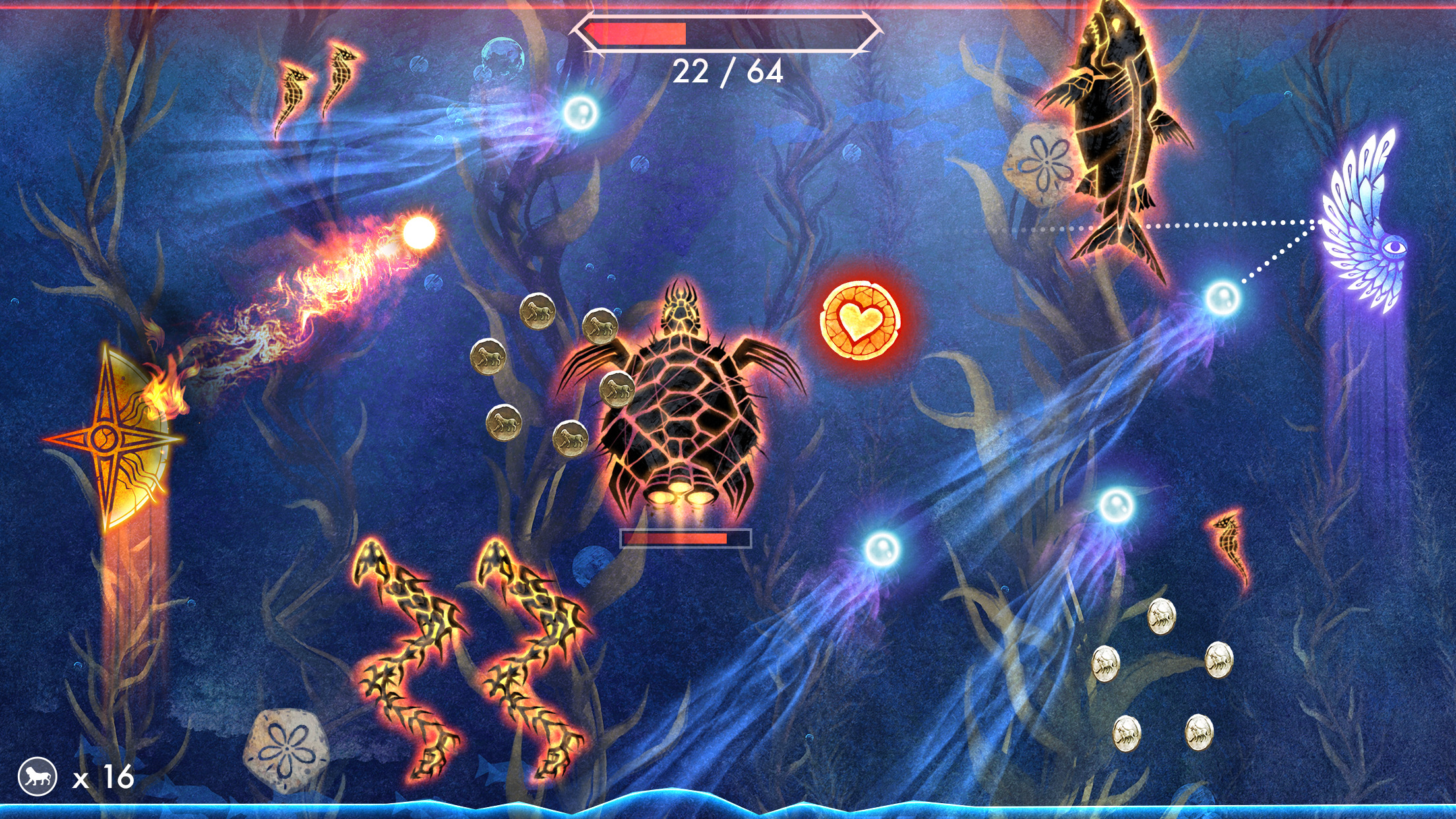 MUL.MASH manages to work quite well in the realm of a known quantity with the Pong gameplay and the way it subverts it. Each enemy’s properties, each powerup, each multiball added, these all change the scenario in play. It makes for a dynamic and exciting game, and if you get into that zone where you’re bouncing multiple balls in the arena at once, it’s amazing. There’s also a strong aspect of strategy in play with the different paddles. You can swap paddles between rounds, so if you find one paddle works best for a particular situation, like if you’re low on health, you can swap in the healing paddle. A simple idea is at the core of MUL.MASH, but it’s expanded out as well as it possibly can be. Riverman Media has produced another game with stellar aesthetics. The visuals are amazingly done here, with fantastic animation and effects. This is just a crisp-looking game that’s easy on the eyes. The sound and music provides a wonderful landscape that adds to the atmosphere. And the advice between rounds from Shuruppak is, well, it’s certainly advice. But it provides some of that irreverence that Riverman Media has become known for.

Reaction really is key to doing well in MUL.MASH because things change so often. The ball split and the randomness of that is something you need to learn to handle well, and in particular learning to keep track of multiple balls. When you have one ball, it’s easy to get into the habit of making precise shots. As soon as you have two, you’re trying to just keep them in motion. Really, the goal is to get to three, that’s when the additional chaos of multiball balances out the lack of precision that you have. But having multiball is likely a net win because you can do more damage per second, and keeping the screen from getting too crowded with enemies is key. I have a qualm with the powerups, and that is that the ball speed up and down upgrades can be found in the middle of the action. This is a problem because you may prefer to use one style or the other, and it can be easy to accidentally pick one up or the other when you don’t want it. Perhaps this should just be a permanent upgrade. The powerup icons can otherwise be tough to tell apart in the heat of action, though most are just beneficial. The wind powerup can be problematic if you suddenly get it as it goes through enemies, but you just need to react to what’s happening. 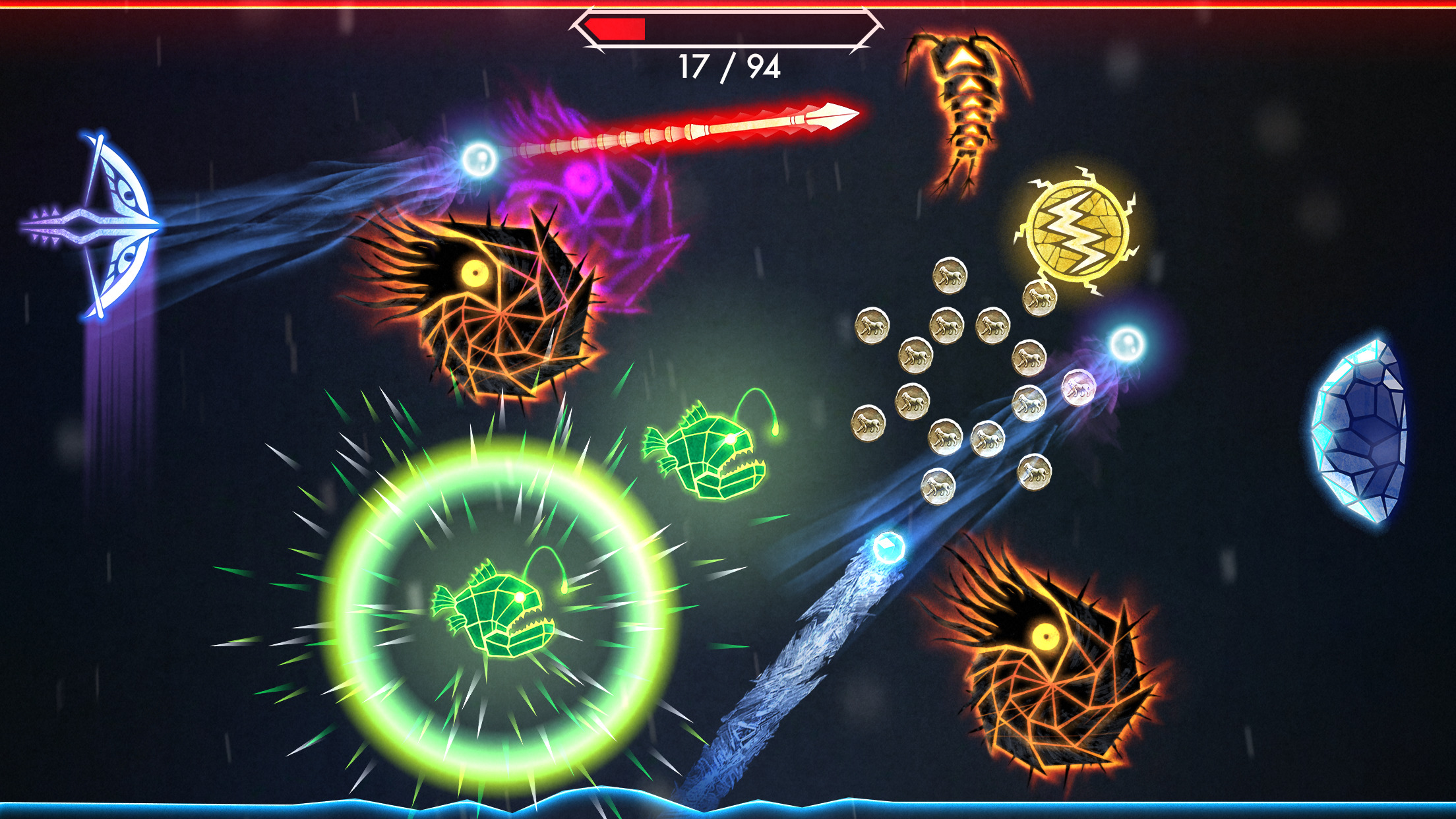 What’s kind of interesting is that while the game supports MFi controllers, I almost prefer the touch controls to this. There’s just a tiny bit of touch precision that you get from the touch controls that helps out with tough angles that you need to hit. A controller with really good analog joysticks will do the job for you, but there’s still benefits to controlling this one with your meat sticks. For example, one paddle with a harpoon attack can only shoot straight with a controller, but can fire at any angle with the touch controls. If perhaps the buttons could be used for subtle adjustments and the joysticks used for big adjustments, that would be superior. You can configure the paddle speed, which is handy if you desire something a bit slower. Still, I’m glad MFi controls are an option because they make sense on paper!

The touch controls are otherwise flawless. There are two options: direct, where the paddles follow your finger exactly, perfect for phones. Then there’s swipe, which uses an offset control scheme, with configurable sensitivity. Swipe is the default on iPad, and the game felt natural on both systems. Heck, unless you dig into the control options in settings, you may not even realize those options are there, that’s just how good the game feels off the bat. Otherwise, you can set thumb guides to be on, which are nice indicators that show the area right in front of your paddle. I’d be interested to try this game out with someone else on the other paddle to see how it plays. How much of the challenge is the fact that you’re managing two different paddles at once? Are two heads really better than one, perhaps two people trying to figure out a situation together might be a difficulty that makes up for having one paddle per person?

My major complaint with MUL.MASH.TAB.BA.GAL.GAL is that you really have to play this game in lengthy sessions because progress isn’t saved if the app gets closed out. As such, it becomes easy to even lose a good, long game and the progress toward unlocking new paddles that comes with it if you decide to do something else. This is a game to sit down with on the iPad and play for a whil.e Hopefully this gets addressed in future updates, and it is being considered because it is quite the detriment to what is otherwise a fun game. And since the levels only take a few minutes to play each, this is otherwise perfect for portable play. This isn’t a bad game to sit down with for a long time on an iPad, as I’ve gotten suckered in myself.

And really, that’s the sign for me that Riverman Media has produced another winner. Once I start playing this game, even lamenting how I can’t keep the multiball going for as long as I want, I can easily lose a lot of time to this game. Hours disappear. Anything Rivverman Media is insta-buy at this point, and MUL.MASH.TAB.BA.GAL.GAL is another winner from the studio. And I hope the game does well: future updates should bring new levels and paddles, and I’m interested to see what Riverman’s got in store for the future of this game.