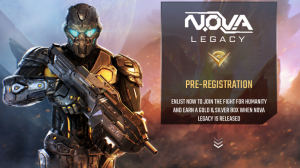 When this video got dropped into our Discord chat this morning (Which is a great place to get breaking iOS games news as it takes so much less time for someone to drop a YouTube link there than it does for me to write an article here, by the way!) when I was out grabbing coffee I couldn’t help but laugh so hard I got strange looks from people around me- Not because the trailer is particularly funny, but because this sort of thing is the exact opposite of what people around here are always asking for. Backing up a bit, back in the hay day of Gameloft, they were rapidly releasing “highly inspired" games for mobile leaning heavily on popular console titles. One of those was the N.O.V.A. series, which would have been pretty easy to mistake as a Halo game if you weren’t too familiar with the Halo universe.

Although there were originally three games released in the N.O.V.A. series, which were such a big deal when they first launched that Gameloft flew me to Paris to shoot this hands-on video. (Which, anecdotally, I messed up the embargo on because of time zones and caused a load of drama.) A second game was eventually released, but all that remains on the App Store now is N.O.V.A. 3 ($6.99) and the awkward freemium conversion Freedom Edition (Free). Since then, any time rumblings of Gameloft happen around here, it seems like people are always talking about how much they want a premium N.O.V.A. or Modern Combat game again.

What does Gameloft announce? Check it out:

Based on information that’s available right now, N.O.V.A Legacy is a free to play reboot of the first N.O.V.A.. So far, Gameloft is only mentioning Google Play, but I really wouldn’t be surprised if it didn’t eventually end up on the App Store (or launch on the App Store at the same time). If the thought of playing N.O.V.A. again with $8 worth of “gifts" really wets your whistle, you can head on over to Facebook to pre-register.

Thanks to everyone who sent this in!