Hello, gentle readers, and welcome to the latest addition to the growing RPG Reload family, the RPG Reload Play-Along. Each month, we’ll be playing an iOS RPG together, sharing laughs and tears in equal measures. The post on the front page (like this one!) is basically here to announce the game in question and give a few tips on getting started. The real action will be happening in the Touch Arcade forums, where you’ll find a thread dedicated to each month’s featured game. Sign up if you haven’t already, post your screenshots, ask for advice, or just chat about your misadventures with others. We’ve got a great community of RPG fans here at TouchArcade, so let’s make the most of it! As a little incentive, at the end of each month, I will randomly pick one of the participants and send them something small and silly from here in Japan. All you have to do to be eligible is, well, play along with the Play-Along! 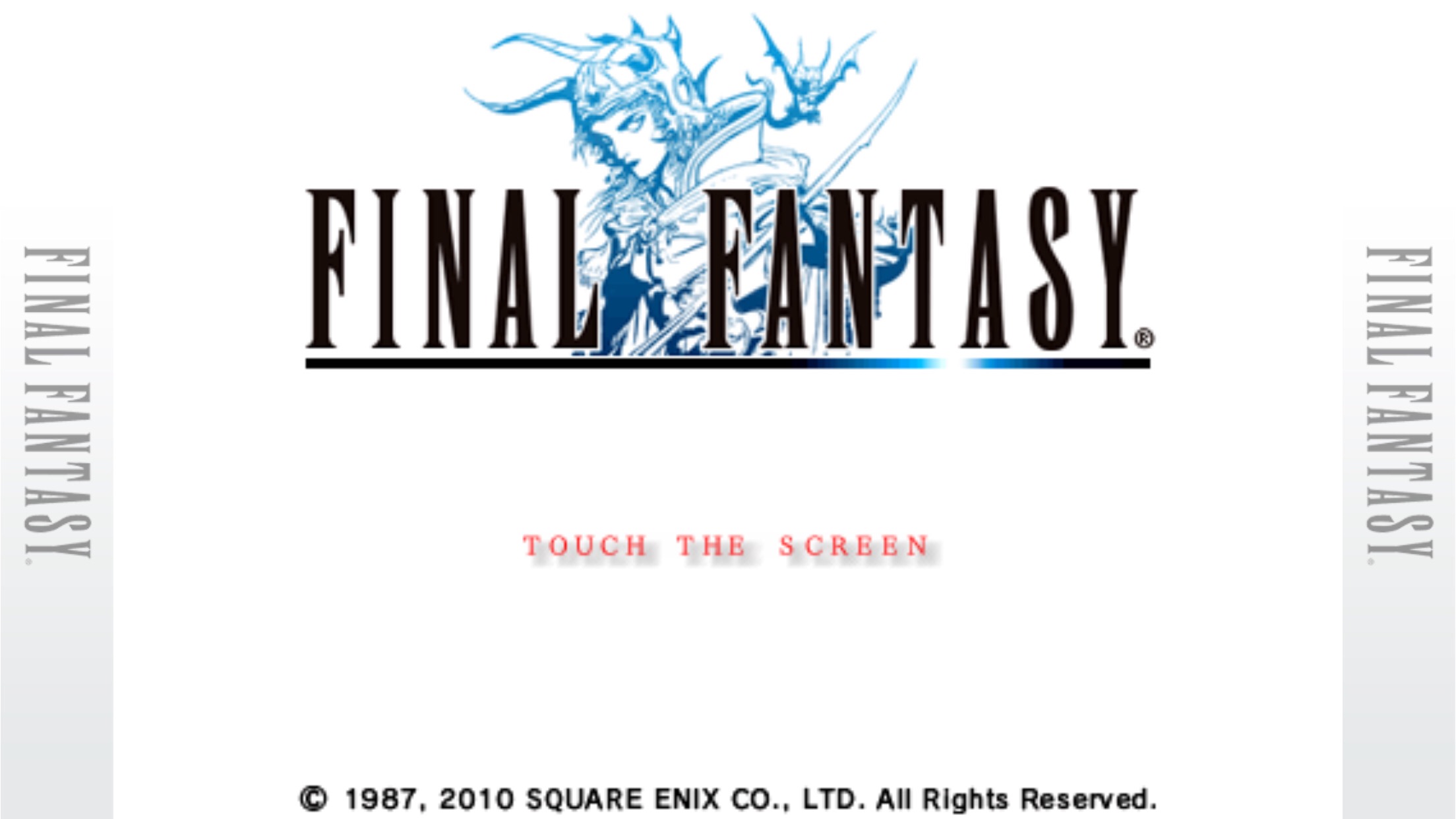 I figured to get things started, we’d pick something on the short and relatively easy side, but with plenty of customization to make for a variety of potential stories to share. Final Fantasy ($7.99) is one of my more frequently replayed RPGs for those very reasons, so that’s how we’re kicking things off. First off, you’ll obviously need the game. You can grab the stand-alone, the version available through the Final Fantasy Portal (Free), or whatever other means you have available. Just make sure you can take screenshots! After you’ve got the game, either log in or sign up for the TouchArcade Forums, head on over to the newly created January RPG Reload Play-Along: Final Fantasy thread and say hello. Oh, and remember that if you want to be eligible to have me send you something small and silly, I’m going to need to send it somewhere, so if you live on the moon or something, please say so. 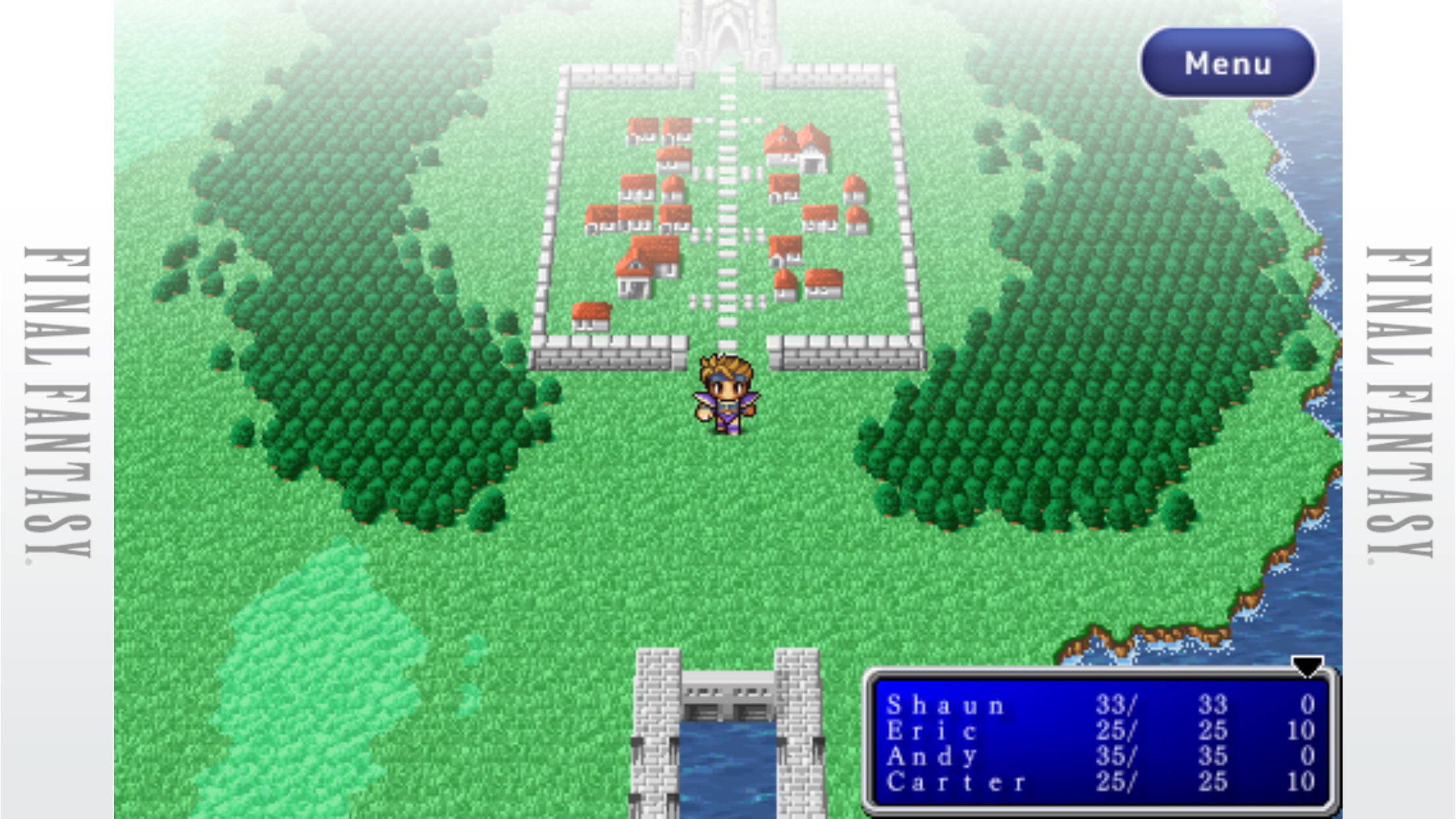 So, Final Fantasy. This is the one that started it all, setting the struggling Square on the path to becoming one of the giants of the genre. If you started with a later installment in the series, this game is probably barely recognizable to you as part of the same franchise, but it does set down a lot of the basic elements that are still around today. In its original form, this was a very tough game, but from the Game Boy Advance version onward, it has had its difficulty nerfed to the point that most players should be able to get through it without too much trouble. That means anyone looking for a challenge is going to have to make it themselves. Luckily, the fact that you have control over your party composition helps with that. Which four jobs you opt to take along with you greatly determines how your game will go, so I’m going to focus most of my advice on party builds. 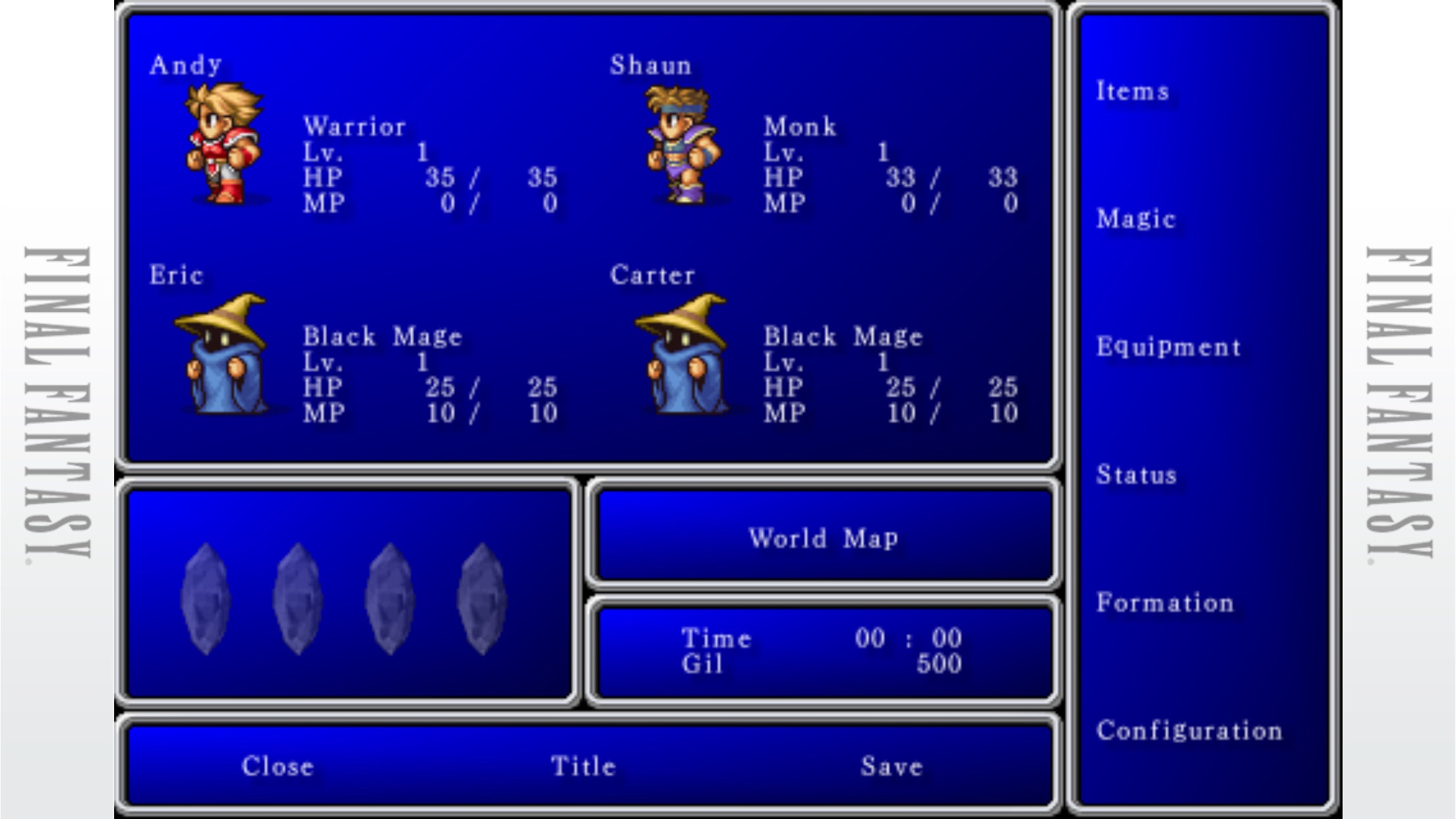 Now, if you like to live dangerously like I do, you can set your party through the following method. Find four six-sided dice, or their equivalent therein, and roll those dice. You now have your party. One corresponds to Warrior, two to Thief, three to Monk, four to Red Mage, five to White Mage, and six to Black Mage. You have to have a little courage to do this, but don’t worry, there is no such thing as an unworkable party in the mobile version of the game. Dare to believe you can survive. If you don’t want to trust Lady Luck, however, here are breakdowns of each job and some good or interesting party combinations. 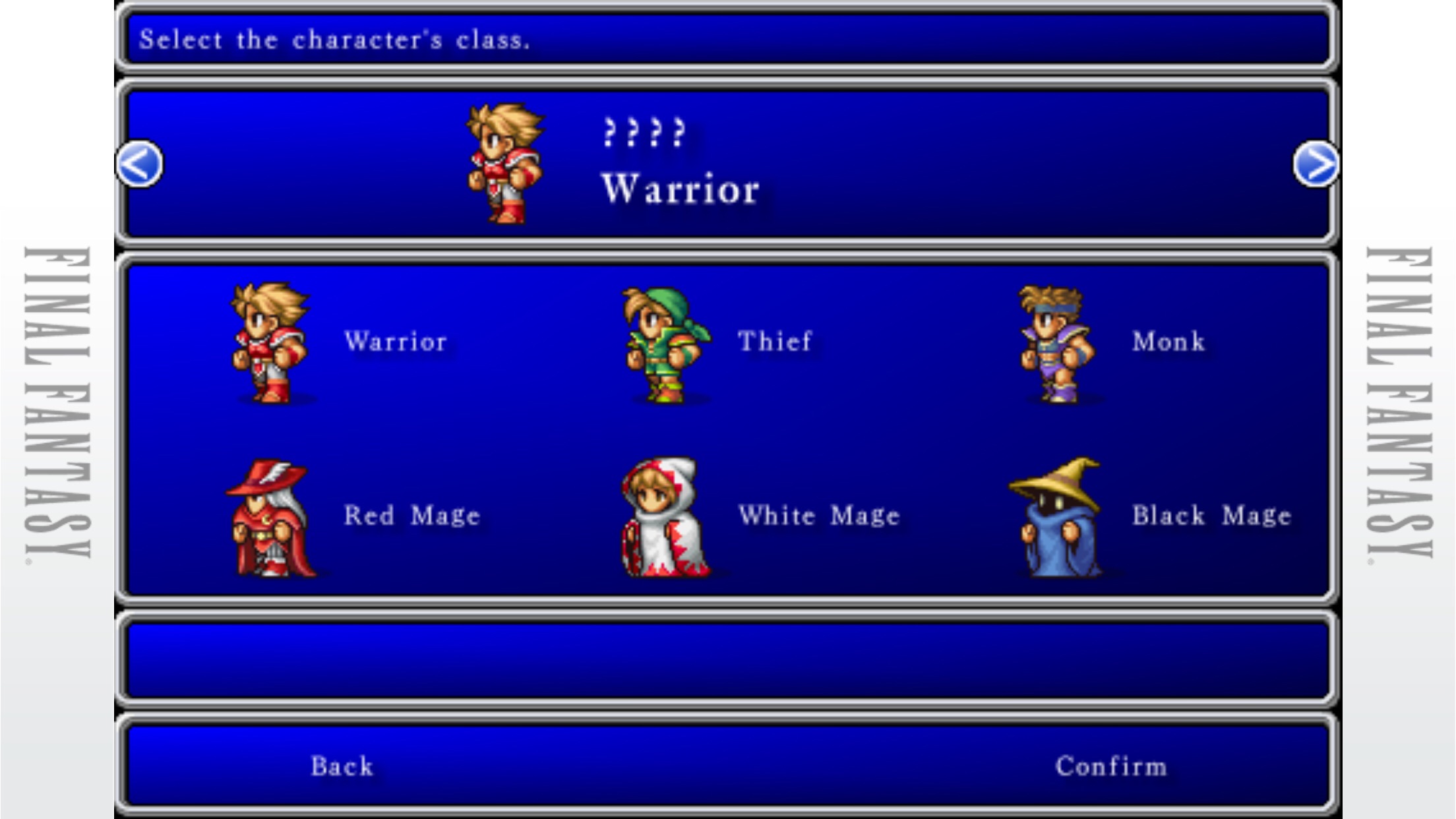 Warrior: An extremely useful party member, the Warrior can equip all of the best weapons and armor in the game. He’s the second-best melee attacker and takes a hit better than anyone else. Put him at the front of your party and he’ll do his job well. Warrior can promote to Knight part-way through the game, giving him access to low level White Magic. It’s not super-useful, but it never hurts to have some consequence-free heals available. Keeping him equipped with the latest gear is important, so be sure to save your Gil.

Thief: He might be the worst party member, though his star rose a little in the newer versions of the game. Until he promotes, the best thing you can say about him is that he makes it a bit easier to run from battles. No, you won’t really need that. He can serve as a melee attacker in a pinch, if nothing else. The real reason to sign him on is that he can promote to a Ninja, gaining access to nearly all of the equipment in the game and some low level Black Magic. He’ll still be outpaced by a Knight in most cases, but it’s close enough that it doesn’t really matter that much.

Monk: He’s one of the best job classes in the game, hands-down. Monk hits hard, has a lot of HP, and needs next to nothing in terms of equipment. In fact, he’s better off barehanded and nearly naked, as he gets damage boosts for fighting without a weapon equipped and a defense bonus based on his stamina. Monk can promote to Master, which just buffs up his boosts and gives him better magic defense gains. A sufficiently-leveled Master can deal damage on a level no other character can match, and his only downside is that he’s a bit squishy compared to the Knight and Ninja.

Red Mage: The flashy con-man of Final Fantasy, the Red Mage is if nothing else the best-dressed Light Warrior. He seems great in the beginning, since he can use quite a bit of the same equipment as the Warrior and many White Magic and Black Magic spells. Unfortunately, he peaks quite early on, and you’ll soon find he’s not very good at anything in particular. He won’t have access to the coolest equipment or best spells, even after promoting to a Red Wizard. If you’re looking for a little extra spice in your game, swap out a Warrior for this guy. If you’re looking for a lot of extra spice, swap out a White Mage, Black Mage, or both for a Red Mage. You’ve been warned.

White Mage: This job is awesome in Final Fantasy, and not just because she’s an amazing healer. Her ability to make use of hammers and even equip the Masamune makes her a surprisingly strong damage-dealer in a pinch, too. Just be careful, because her limited access to quality armor means she’s quite vulnerable if monsters start wailing on her. Of course, her best quality is that with her spells, she saves you a fortune on potion purchases, and her high-level healing magic can keep pace with even the most deadly of enemies. She promotes to a White Wizard, which allows her to equip Thor’s Hammer and the highest-level White Magic spells.

Black Mage: Ah, Black Mage. The squishiest of the lot thanks to his low HP gains, but as long as the MP is flowing, he can do damage like no other. He’ll eventually be able to promote to the Black Wizard class, giving him access to the most powerful Black Magic in the game. That’s nothing surprising, though. What is interesting is that if you equip the Black Wizard with the Cat Claws and have him cast Saber on himself, he can dish out a fair bit of physical damage, too. A welcome member in any party, but it’s best to keep him near the back of the line if possible. 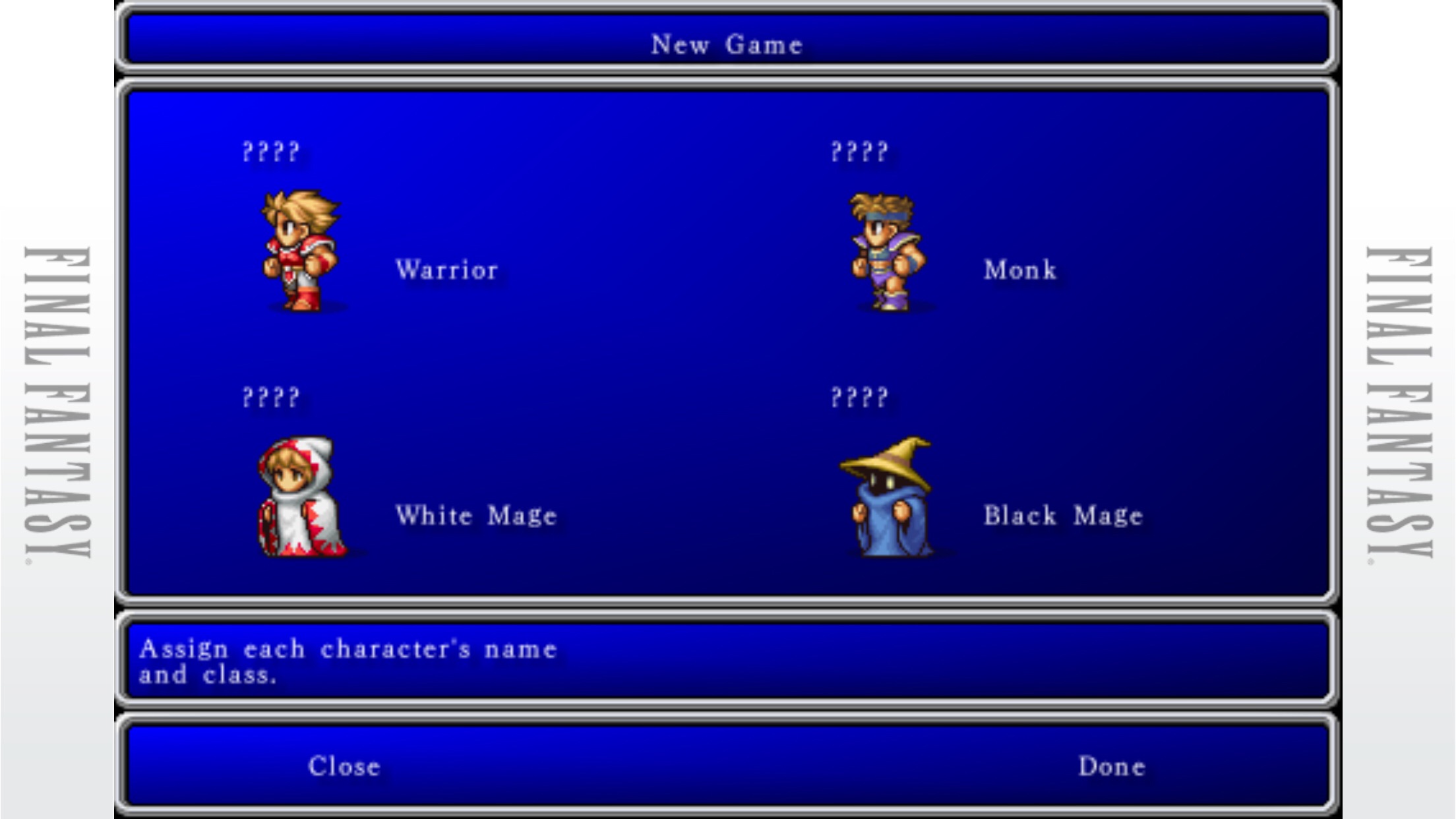 The Path of Least Friction: Warrior, Monk, White Mage, Black Mage
If you want the easiest route through the game, this is the party for you. The Warrior will deal damage and tank most of the enemy attacks. Monk will do his punchy bit to devastating effect. White Mage has you covered for healing and buffs, while the Black Mage is free to spew fiery, icy, or bolty death down as he sees fit. 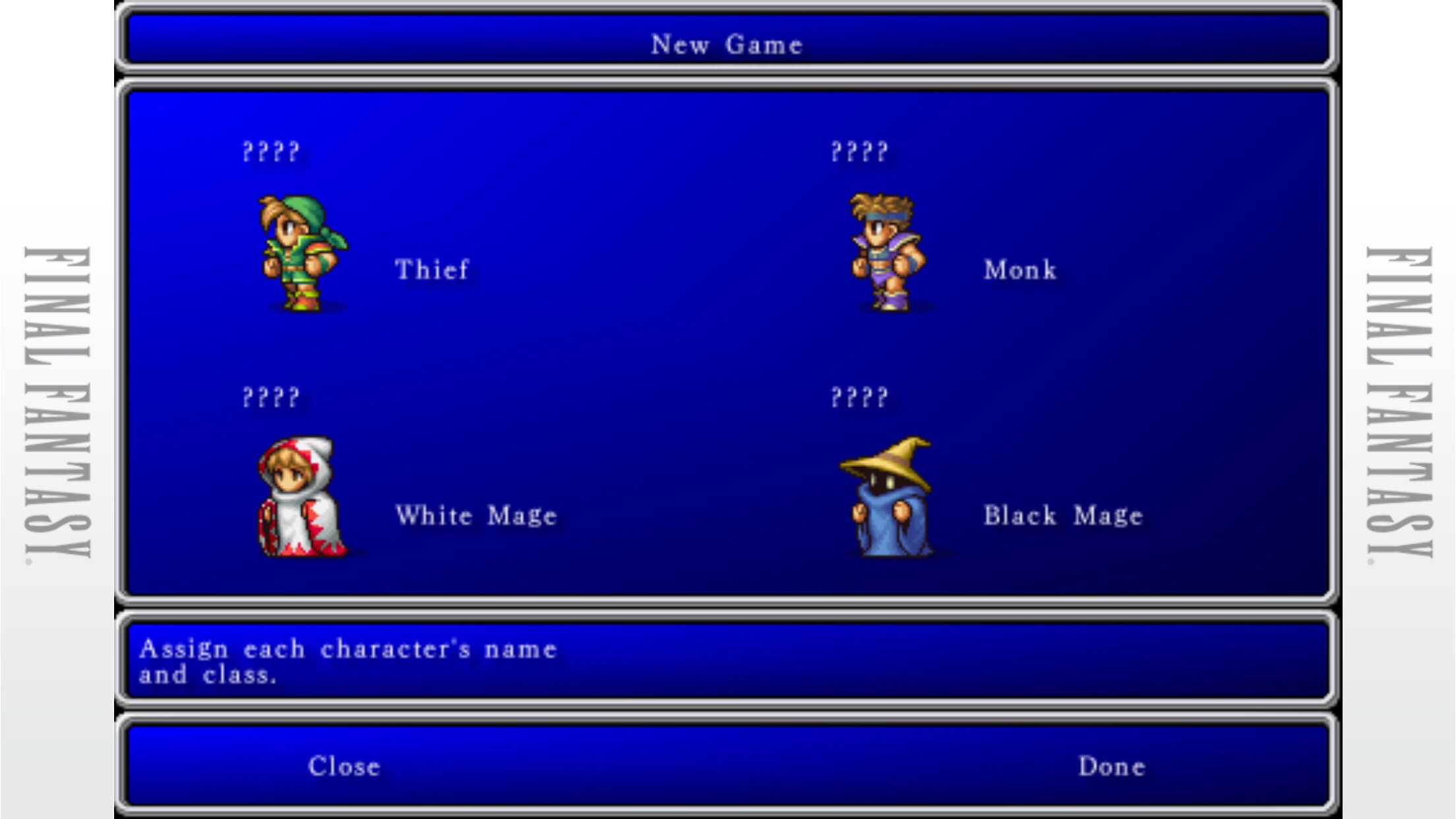 But I Like Ninjas!: Thief, Monk, White Mage, Black Mage
This party will have a slightly tougher time early on, but you end up with a Ninja, which is pretty cool. Honestly, the Monk and the Mages can beat this game on their own without too much sweat, so if you really want a Ninja, there’s little harm in suffering the Thief for a while. 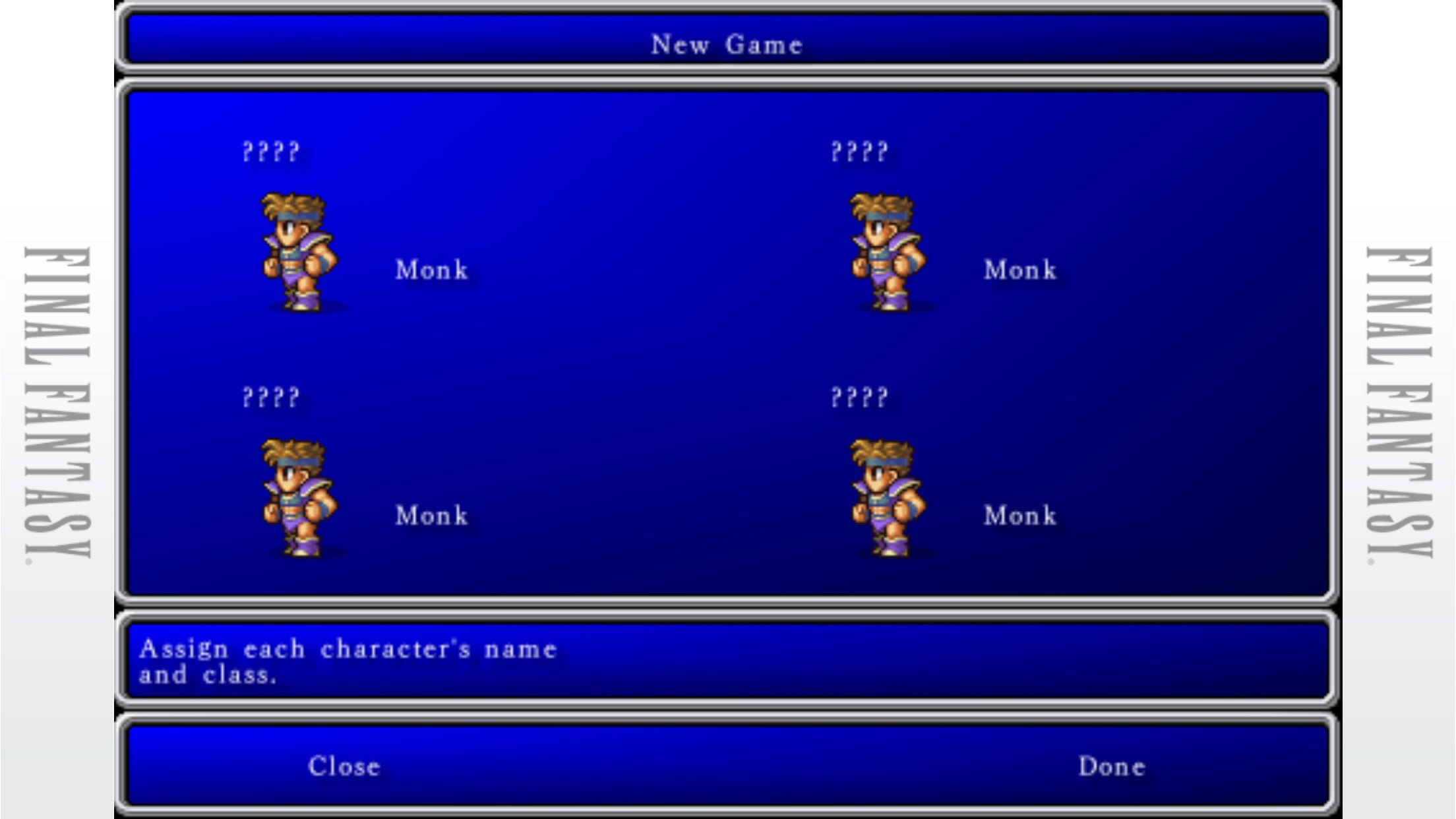 The Path of Asceticism: Monk, Monk, Monk, Monk
Okay, hear me out. This seems like a ridiculous party, and you’ll definitely need to keep well-stocked on healing items if you’re going to pull it off. But by the time you reach level 10 or so, the benefits of this bunch will be quite clear. Go naked, worry not about Gil, and punch evil in the face at four times the rate of a regular party. 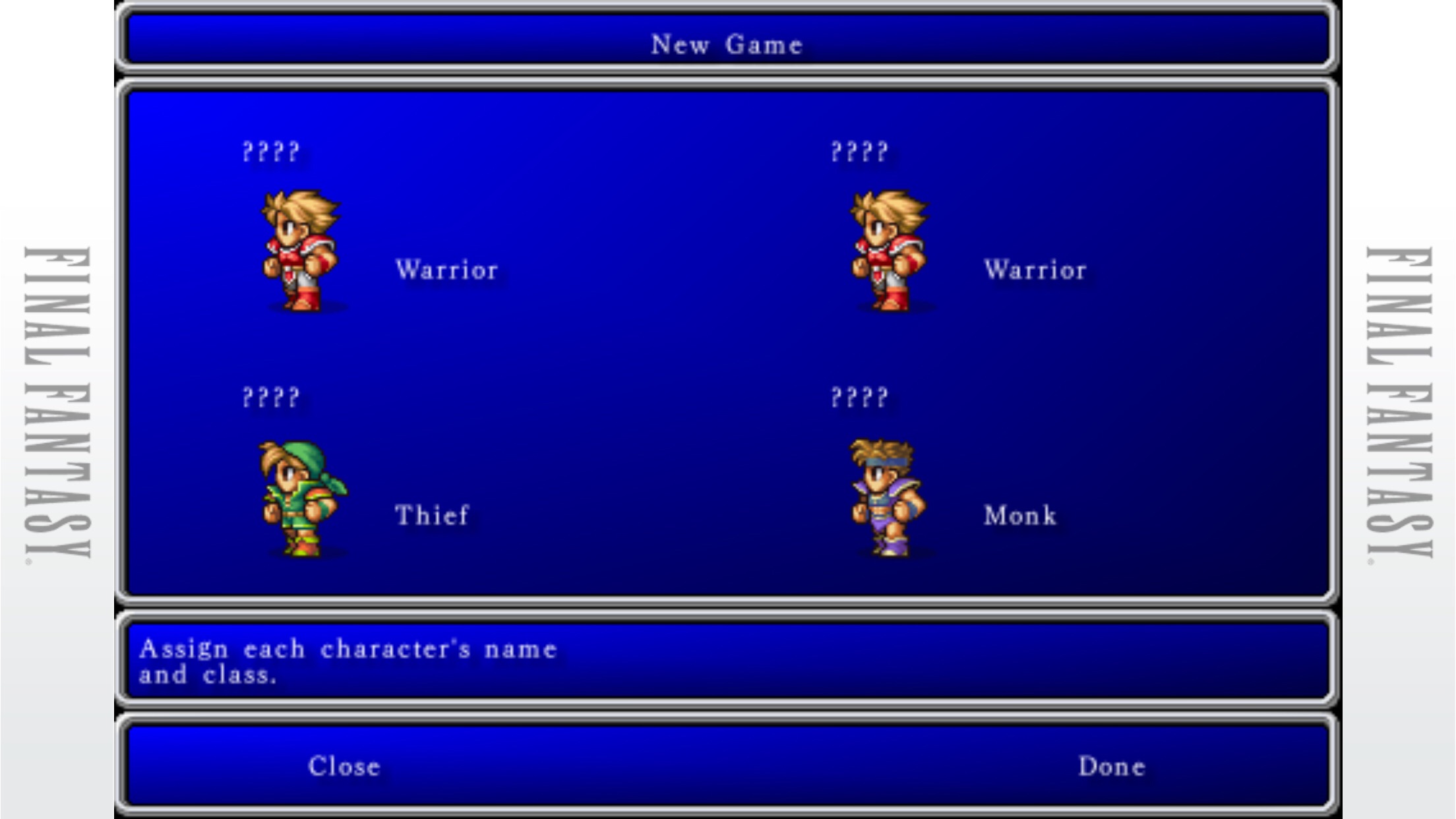 No Mages Allowed: Warrior, Warrior, Thief, Monk
The benefits of this party are obvious. When it comes to a pure physical contest, nothing is going to take this group down. The extra Warrior has two purposes. First, you’ll be able to make the fullest use of all the sweet gear you’ll collect later in the game, and second, an extra Knight means you can commit at least one to healing in a pinch. This is another party that is going to need to visit the item shop on the regular, though. 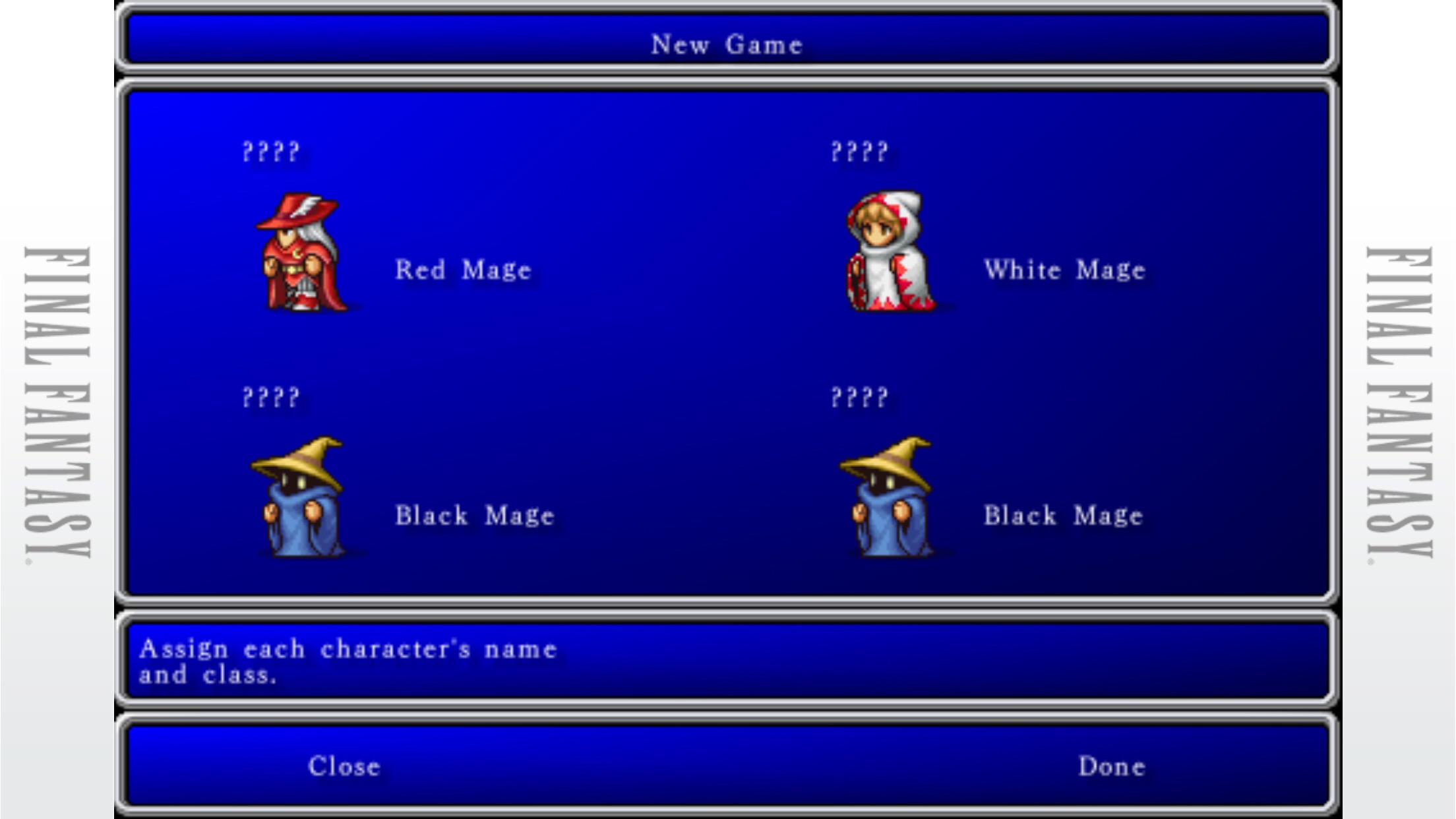 Only Mages Allowed: Red Mage, White Mage, Black Mage, Black Mage
At first, you might think two Red Mages is better here, but the Red Mage really does suck in the long run. The second Black Mage is there to help you end tough battles quicker, before the enemies can make short work of your goofy feather-capped friend. Be warned, you’re going to be spending a small fortune on magic. 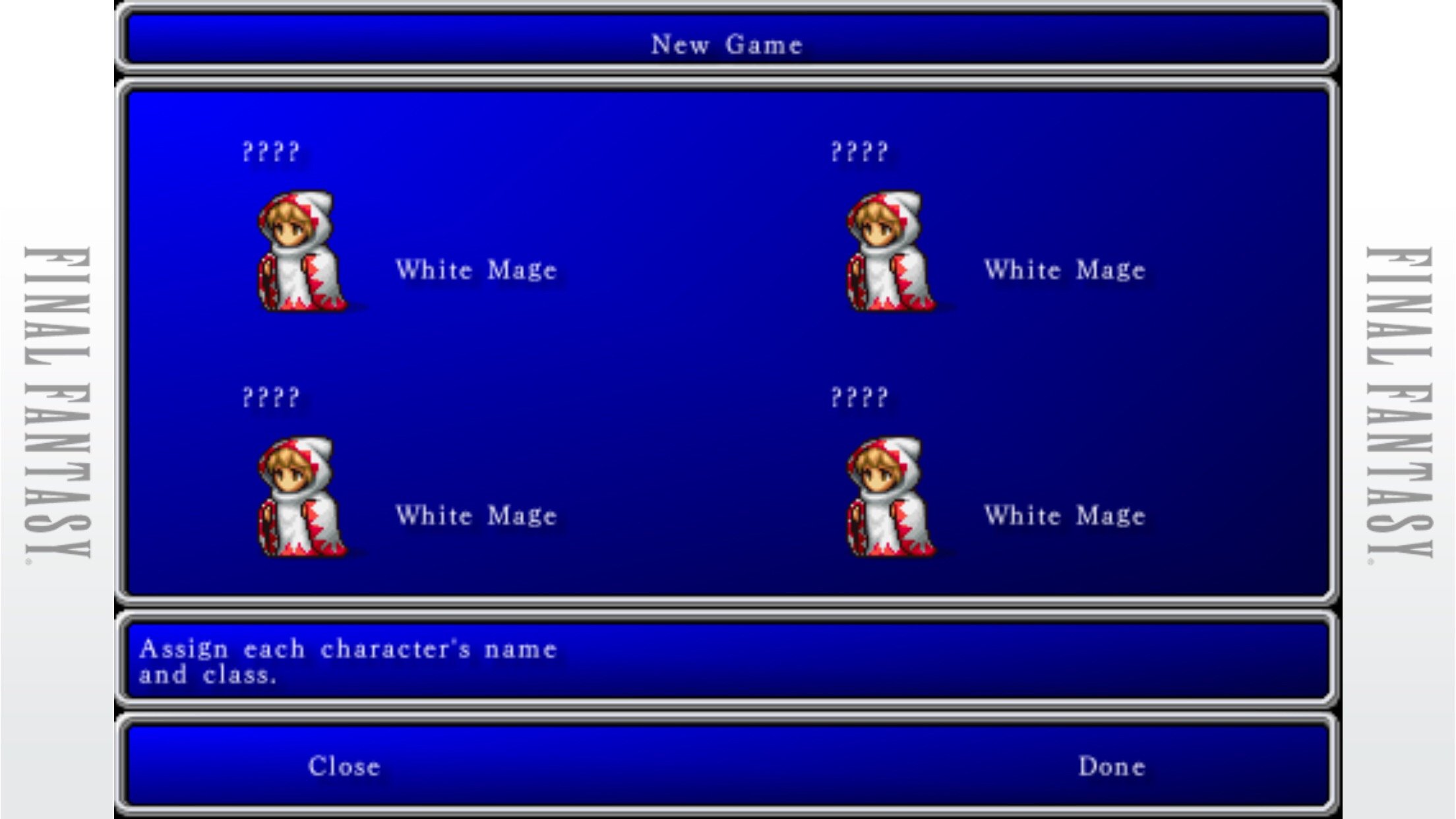 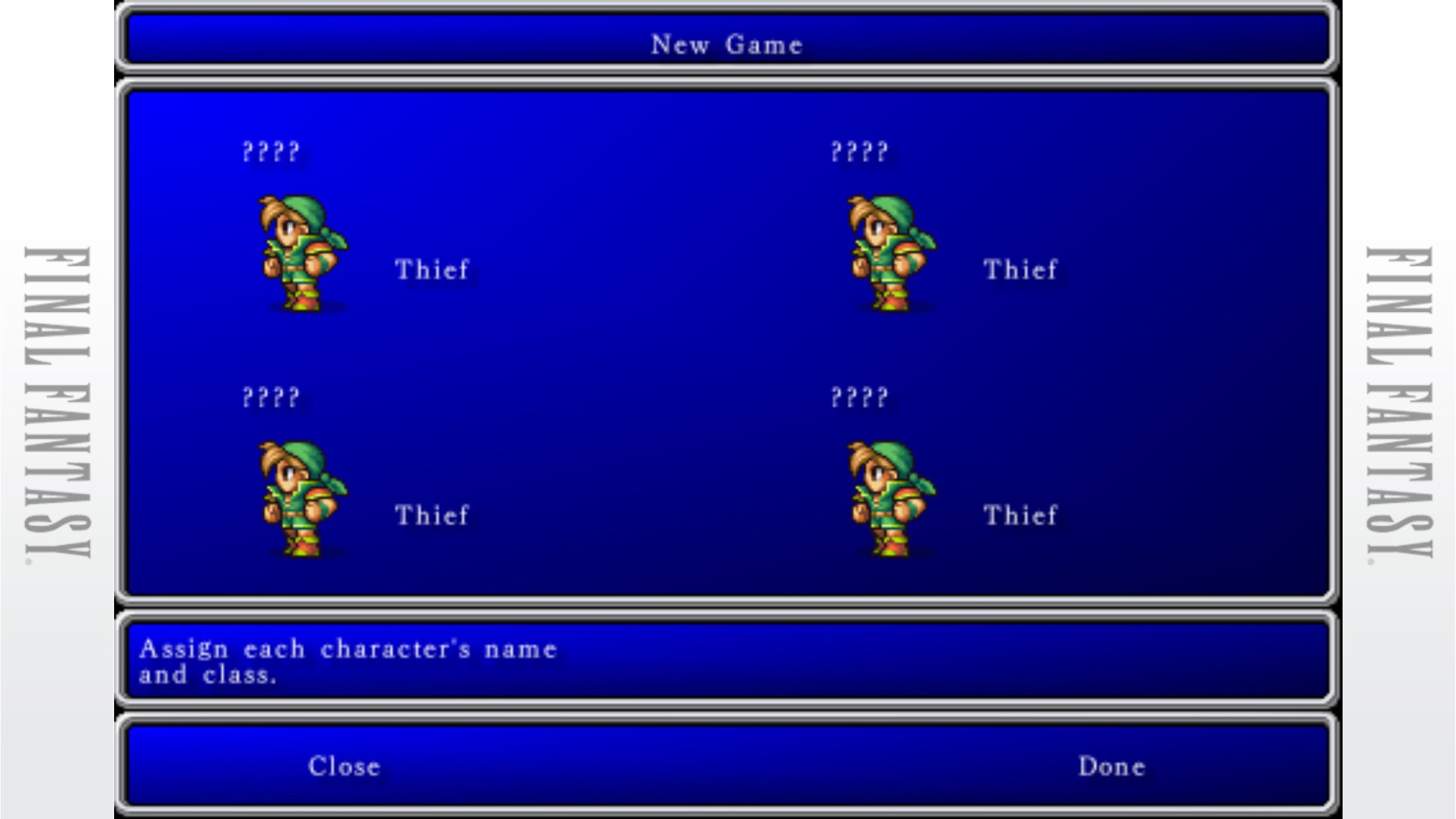 But I Really, Really Like Ninjas: Thief, Thief, Thief, Thief
Hoo boy, friend. I appreciate that you want to have four Ninjas. Maybe you will even name them after the Ninja Turtles, because that’s pretty funny. But you’re going to have to earn this one. No one has a harder time pre-promotion than a party of Thieves. Survive long enough to make them all Ninjas, though, and you’ll have a nice time slicing through the rest of the game. Pack those potions! 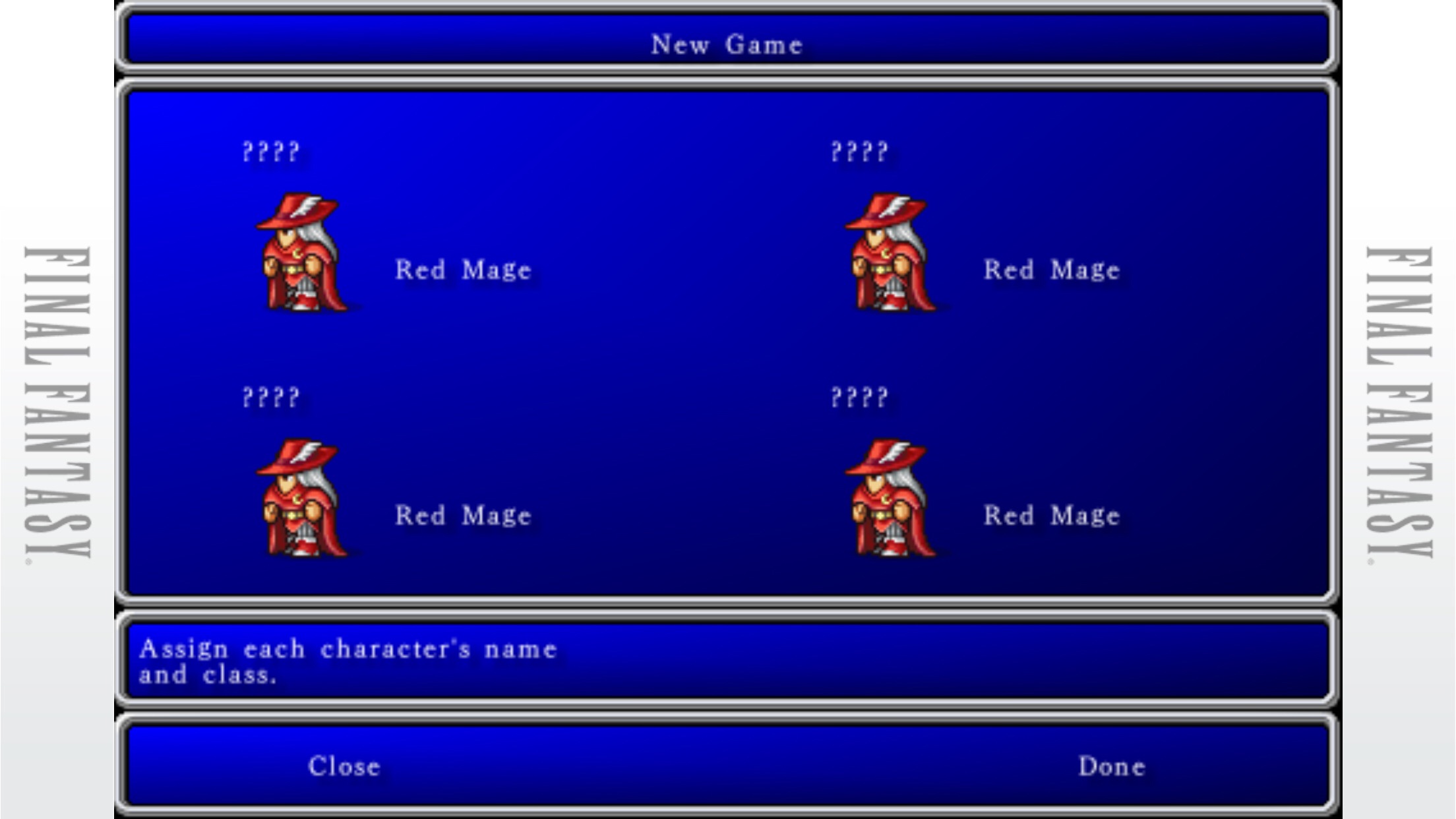 You can use one of these parties or just go ahead and make your own! As for me, my extremely scientific method has resulted in a three, six, one, and six. So, uh, I guess I’ll be stocking up on those healing potions right about now. You can follow my exploits in the January RPG Reload Play-Along thread, or watch for sporadic updates on Twitter at @RPGReload. See you all in the thread, and good luck!

NOTE: Comments have been closed on this article so to participate in the Final Fantasy Play-Along or leave a comment please head to the forum thread.