Board game ports are a popular genre on the App Store, and while some are fun, not all of them strike a good balance between retaining the feel of a board game and taking advantage of all the digital realm can offer. I’m glad to say Colt Express ($3.99), the port of the award-winning board game, manages to bring the board game to life on digital by adding enough animation and sounds to make it pleasing to the eye while keeping the spirit of the board game intact. In fact, the developers have done something unusual in this port; they’ve transformed the 3D trains of the board game into 2D ones that look made of cardboard.

Usually, the transformation goes the other way around, with 2D board games gaining another dimension on digital, so I was glad to see the developers daring to be different and succeeding. Colt Express is definitely one of the best ports out there and brings to the table loads of content, entertaining characters, and mechanics that make it unpredictable enough to keep players coming back for more. 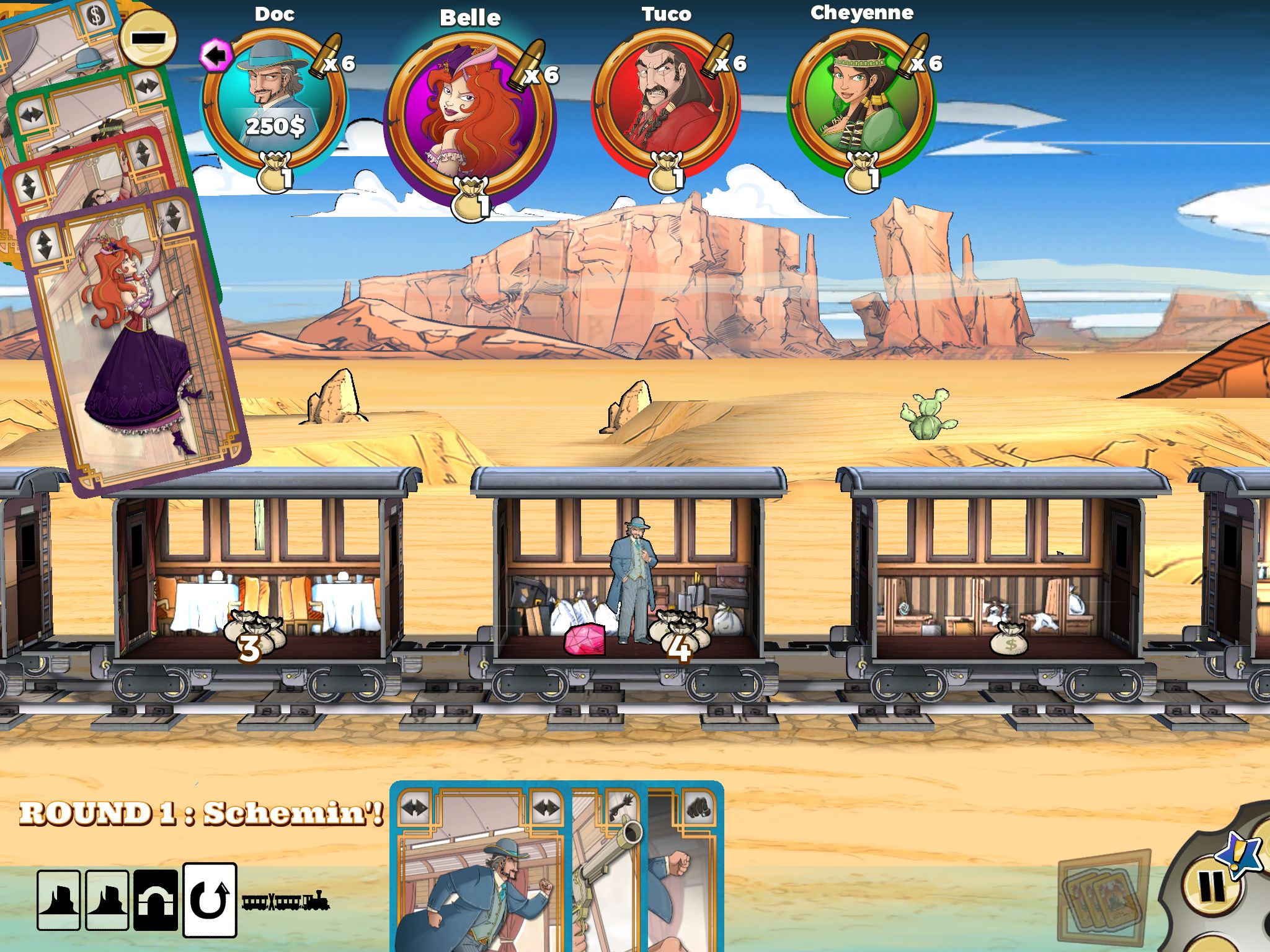 Colt Express takes place on a moving train during the time of the Old West, and the main mechanic is quite simple, but that doesn’t mean the strategies are simple too. Each player gets a number of cards that let their characters move across the train cars, climb on the roof or climb back down, shoot other players, punch other players, steal treasure from the floor, or move the Marshall around. In the first phase, each player plays one or two cards each turn, and once that phase is over, the characters play out those cards in order, which leads to all kinds of silly situations.

For instance, you might play a card that moves your character to the next car, and then when your turn comes again, play the card that lets you steal some treasure. While your character might indeed move to the car just fine, by the time the action of your second card is actually executed, you might have been punched away from that car. So when you bend down to get that treasure you thought you would, you end up literally grasping at air. 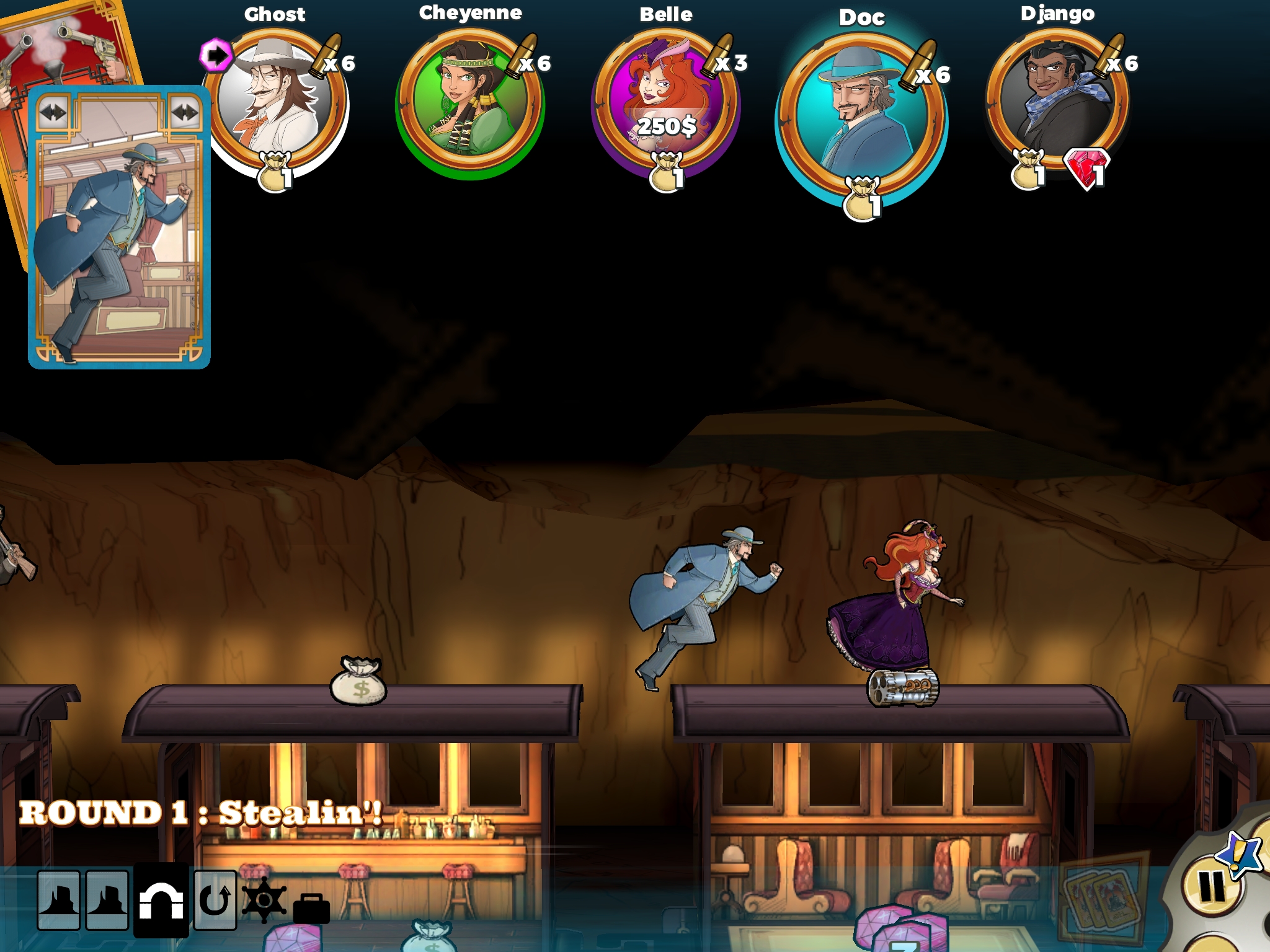 Now imagine you have 6 players on the train at the same time and multiple rounds to play through, and you can see how crazy it can get. That doesn’t mean the game is random; you can see what kind of cards other players have put down and strategize accordingly (though when going through tunnels, everyone’s cards are played face down). While in the first few rounds I played I was playing cards a bit aimlessly, I slowly started figuring out the limitations of each train position (you can travel further when on top of a car but risk getting shot more, which adds useless cards to your deck) and became much more tactical. 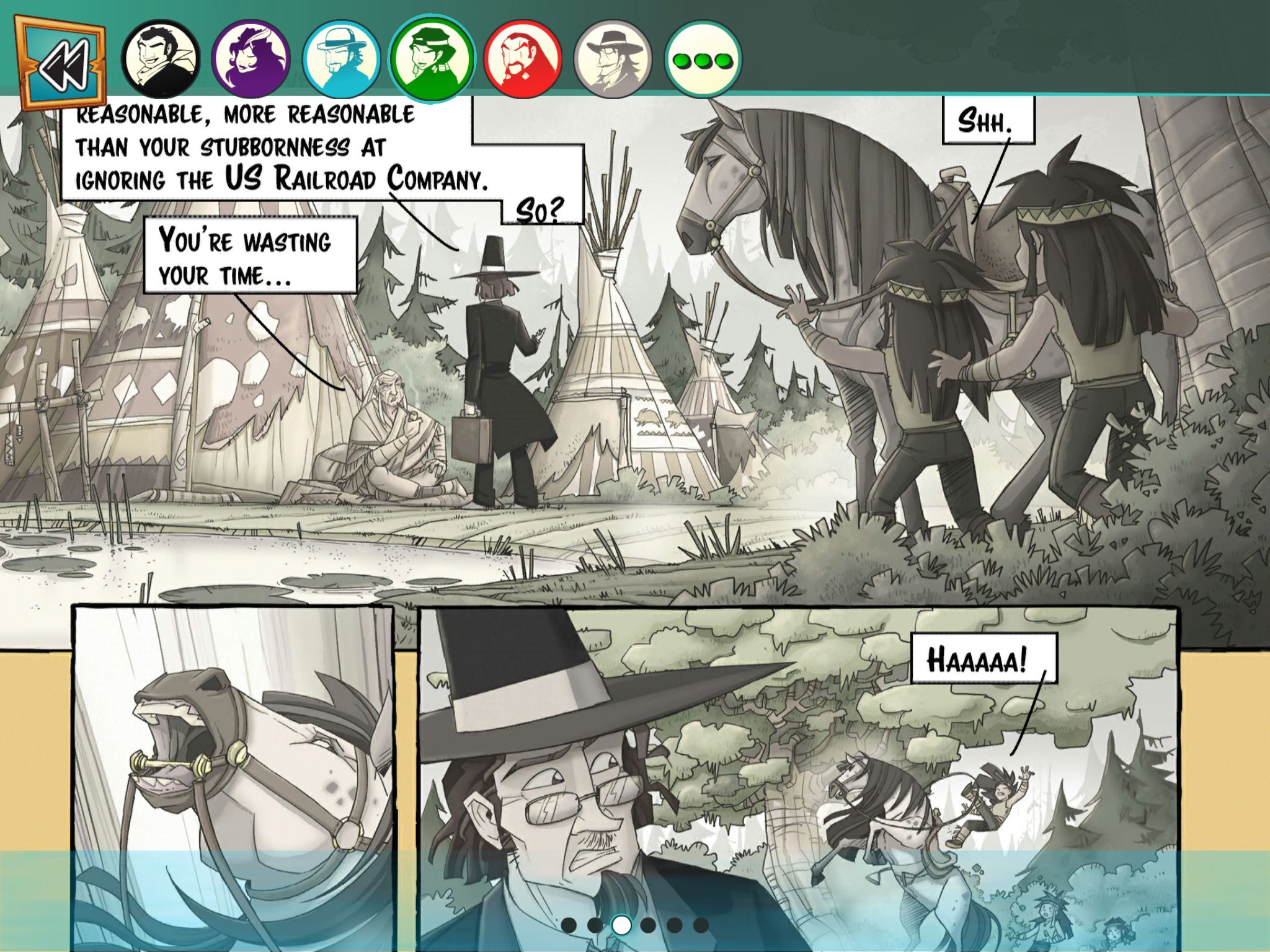 The digital version of the game comes with a ton of content, from single player to online and hot seat multiplayer, but the part I enjoyed the most was the Story Mode for each of the six characters. Each story has multiple chapters and a comic book, and they really do play out like a narrative. The classic version of Colt Express is all about stealing the most money, but these story chapters give you some really fun tasks to complete like having to meet up with a certain character in one car by the end of Round 2, or shoot your prototype gun at least twice before Round 3, and so on. These entertaining missions really help bring the game to life, and I really enjoyed playing through them. Once you complete a chapter, you get more pages of each character’s entertaining comic book, and once you complete all the chapters of a character’s story, you unlock variants. 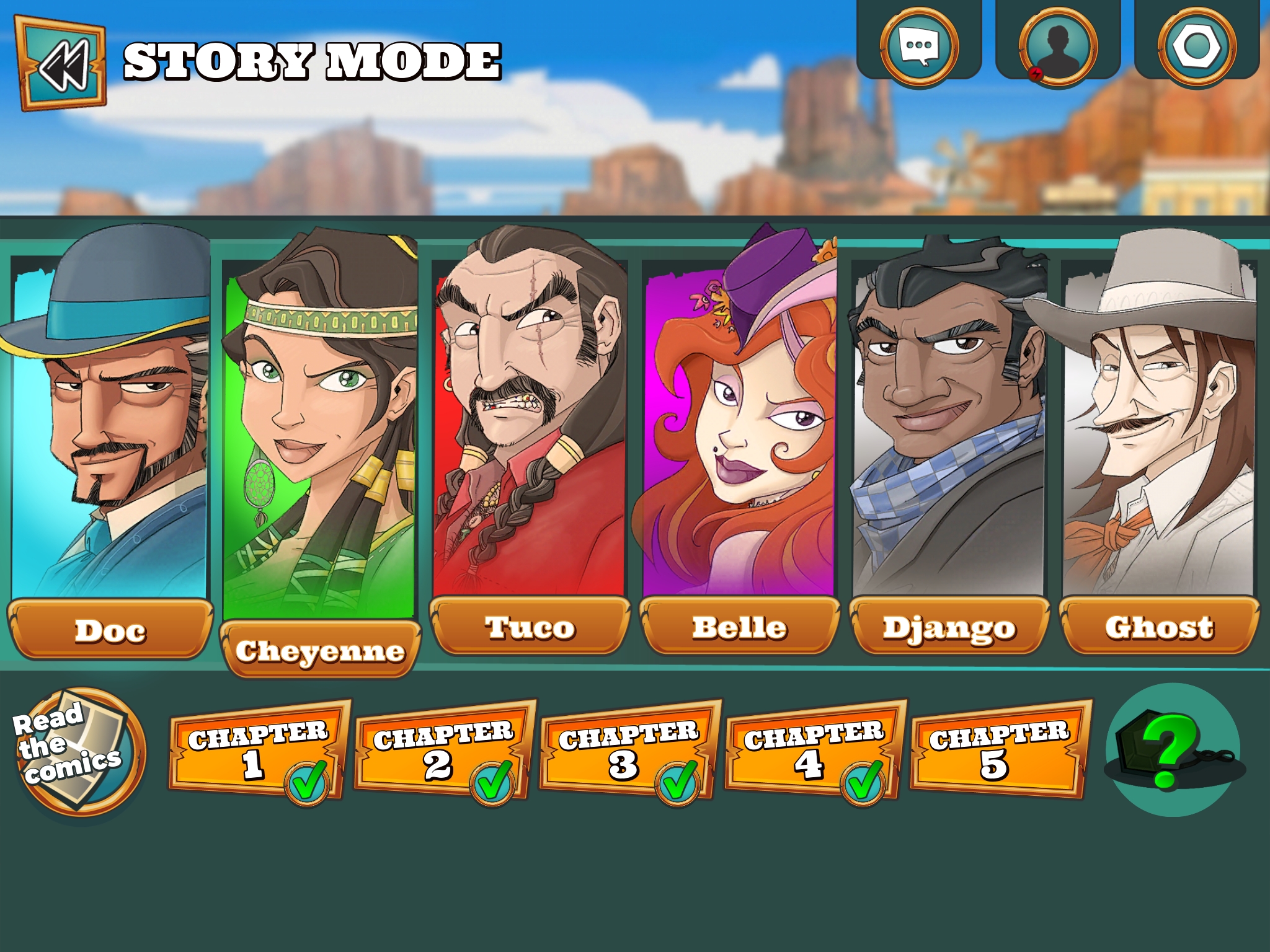 While the gameplay mechanics are very entertaining and the content plentiful, it’s the theme and art that makes Colt Express stand out even more. The Old West train robbery theme makes for a very entertaining game, and the characters – stereotypical Western characters as they might be – are interesting enough to make the story part of the game fun to play. The art is fantastic and uses the card art from the board game to great effect. Instead of having meeples to move around the train though, you have paper cutouts of the card art. And when they move around, they move like a cardboard cutout would, which makes it entertaining to watch.

Colt Express is a great port of a fun game, and it’s one that’s very easy to recommend both to those who enjoy board games and to mobile gamers in general. The art is fantastic, the gameplay mechanics work great, and there’s plenty of content to keep you playing the game for a long time to come. I do wish the game had an undo button for when you accidentally play the wrong card, but that’s not a major issue. The game is a premium experience with absolutely no IAPs. So, if you’re looking for a fun board game to play either solo or with others, I suggest you go rob a train in Colt Express.