Nomads going on massive treks across the land with their tribes in tow. A lot of quality entertainment has been mined from that concept, most notably in recent gaming history with The Banner Saga ($9.99). This time, Choice of Games is taking a crack at it with Saga of the North Wind ($5.99), a relatively lengthy adventure gamebook from writer Tom Knights. It’s a good idea for a game like this, and the quality of the prose here is strong, but a few elements keep it from being all that it could have been. If you’ve got an interest in the topic matter, though, you’ll probably find something to like here. 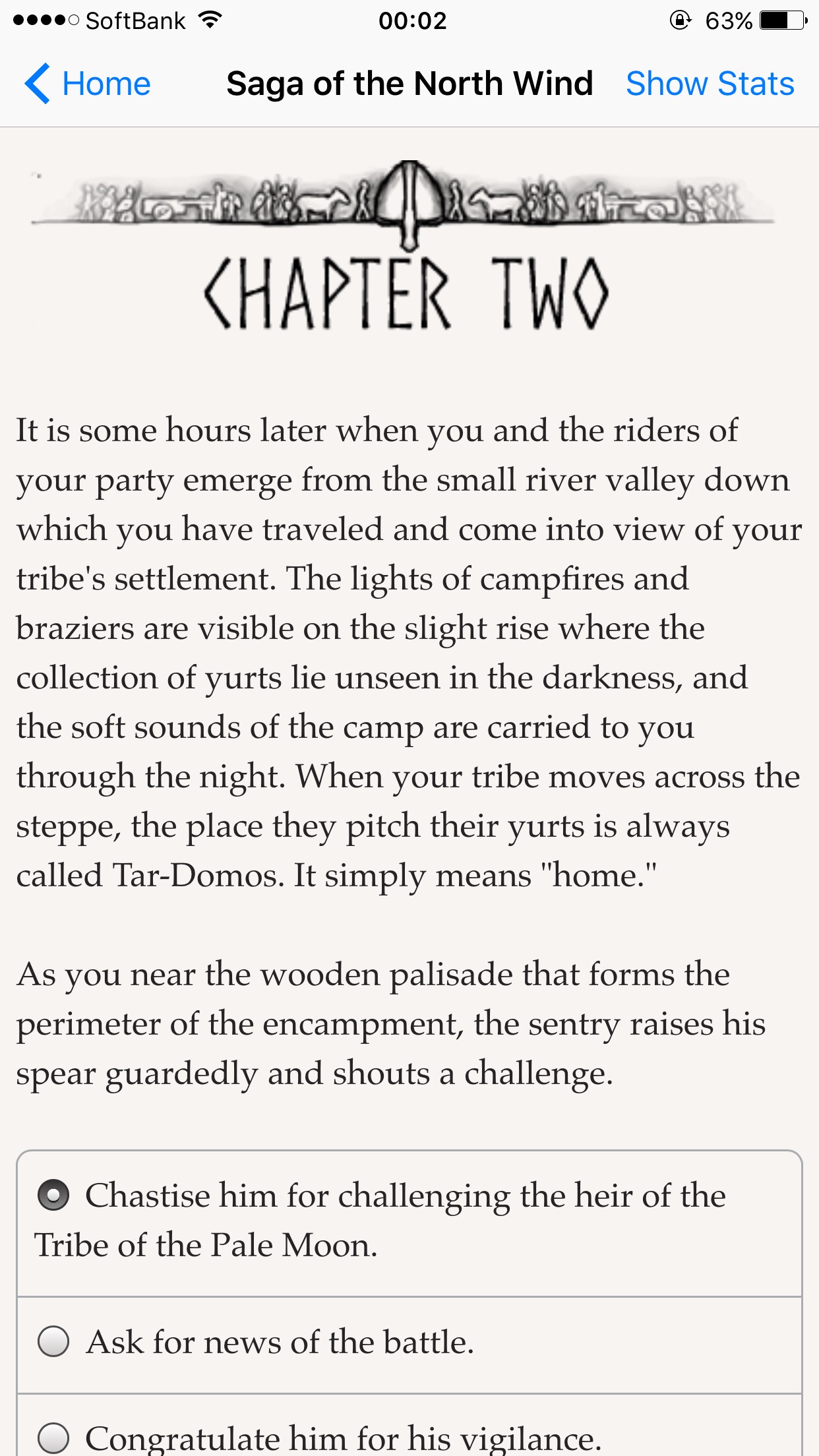 You play as the child of a chieftain. Your tribe is one of the strongest in the Northern Steppe, but you soon end up on the run from a more powerful foe. The Tribe of the Black Wolf have been sweeping up from the south, subduing every other tribe they come across. Their leader, the dark shaman Zhan-Ukhel, sees you as a threat to his power, but why? No longer safe in your previous home, your whole tribe must begin a pilgrimage to a land seen only in a vision from the gods: the Valley of the North Wind. Just getting there is hard enough. None of the tribes have ever ventured so far north. But you must also mind the threats snapping at your heels from the Black Wolf tribe, to say nothing of potential dangers from within. When the leadership of the tribe falls to you, you’ll have to decide what kind of leader you’re going to be.

So, exciting premise, but does it pay off? Kind of. You will indeed get at least one exciting tale out of all of this. Other than one fairly big moment that I couldn’t buy, the story was interesting and well-written all the way through. But there’s more to a gamebook than just having a good story, and it’s in those other respects where Saga of the North Wind stumbles a bit. There are some moments where you have to make blind choices, which is one of the most frustrating mechanics to put in a choice-based fiction game. If you’re only going to give me a choice of directions without any indications what separates them, you might as well just flip a coin. It feels like I’m having my agency taken away, and while that can be used as an effective story-telling tool, here it just sticks out as a bizarre random element. 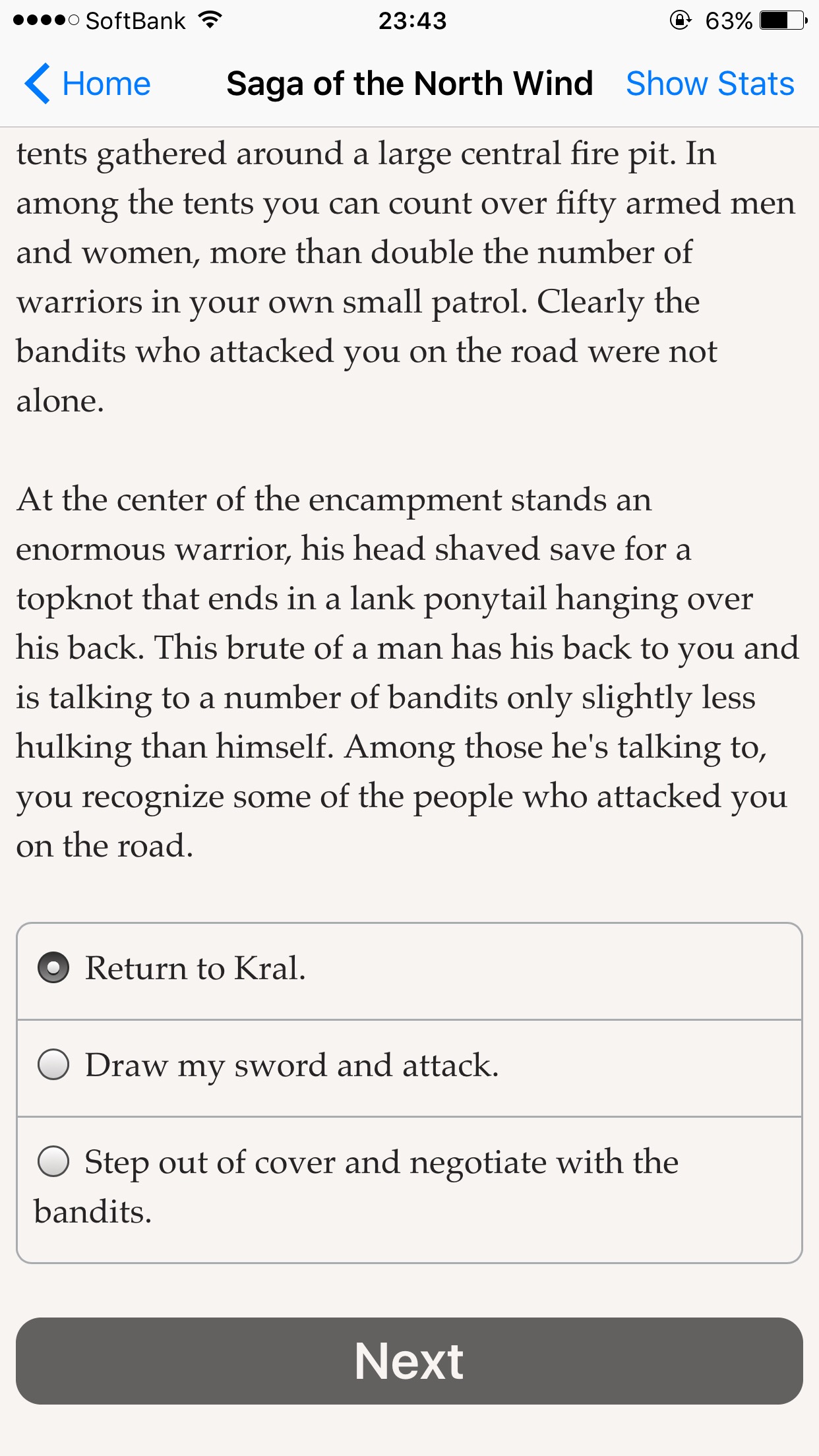 There are other times where you can spot the game part of the gamebook at work, too. You get railroaded more than a few times along your journey, and the writing doesn’t always handle things in a smooth and believable way if you choose in a direction other than the obviously intended one. A good gamebook should make me feel like going back and playing again to see what choosing differently would accomplish, but it was clear in Saga of the North Wind that the author had a plan and you were going to stick to it whether you liked it or not. Replaying the game more or less confirmed that suspicion. While I dug out some slight variances in the endings, getting any dramatically different outcomes took a lot more work than you would expect. You’ll have to be making the correct choices the whole way through to have a good shot at anything other than the default ending.

Again, that’s not necessarily a problem, but the game makes it seem like you have bigger choices than you do, only to almost immediately reinforce that your choice never mattered at all. Success or failure in certain situations relies on your statistics, but the game doesn’t make it clear enough most of the time as to which stats line up with which choices. Even failure tends to roll you along the main story path, however, so I suppose it doesn’t matter that much. The one place where the stats had an obvious effect on the story also created the most implausible situation for me in my entire time with the game. At one point, someone in your tribe betrays you. The game seems to pick the character who you have the worst relationship with, but in my first playthrough, that character was someone who gave zero prior indication that they were capable of such dastardly deeds. 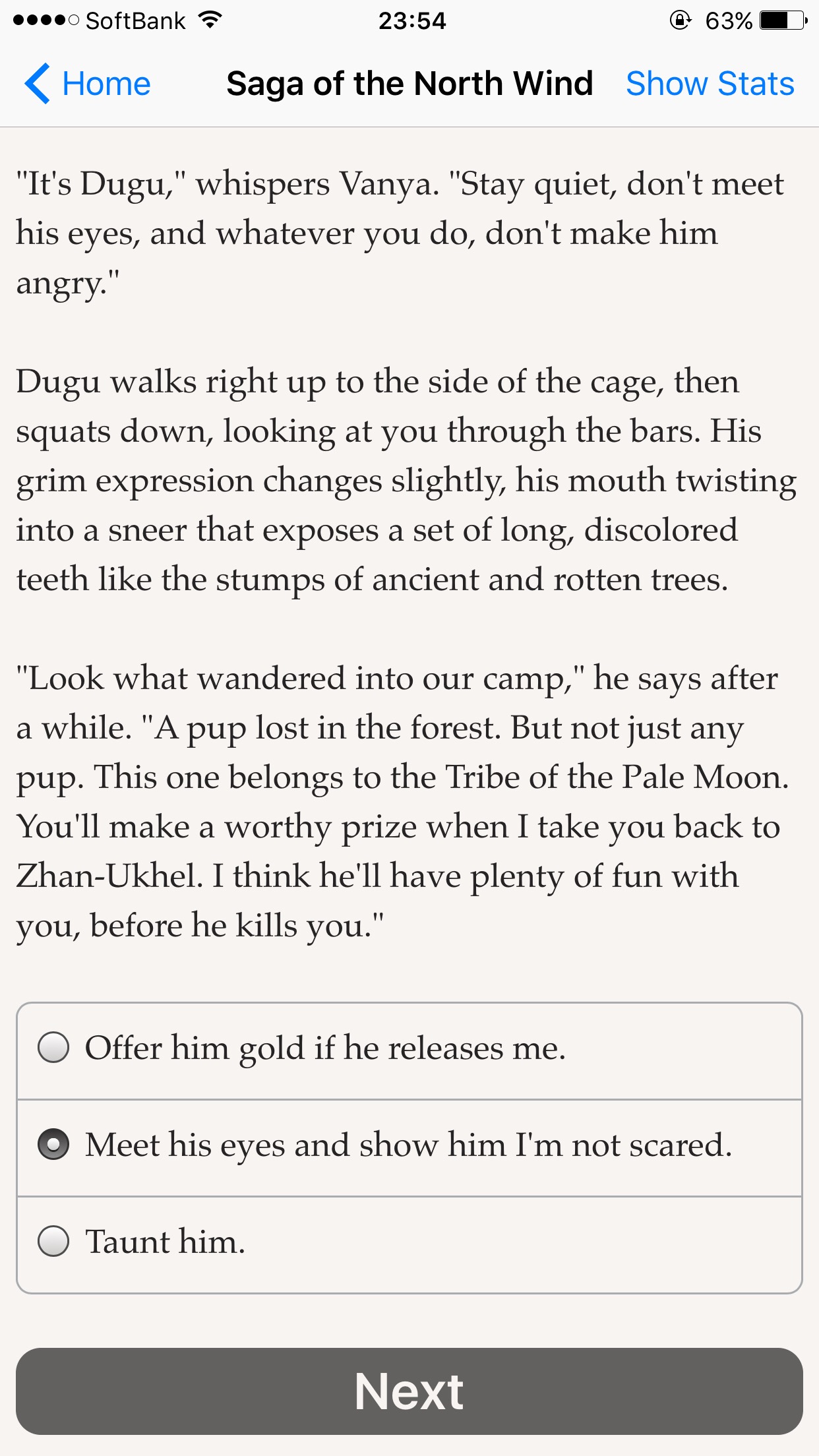 The romance option also felt quite awkward. Like several other ChoiceScript games, the romance takes a backseat to the story for the most part. You’ll have locked into your only potential partner for each story well before you realize that it’s going down the romance road. So while you can, as per usual, choose your gender and sexual orientation, it’s very likely that you’ll get stuck with an incompatible partner as your only possible choice. It’s not a huge deal, but it is something of a bummer, since you’re obviously meant to find comfort with that person at the point in the story that it comes up. The relationships between characters in general aren’t particularly believable or handled all that well in Saga of the North Wind, so I suppose this was just one more brick in the wall on that end.

That all being said, the overall plot is worth reading, and for the most part, the text is quite readable. Some of the action scenes were especially strong, and the author has a strong talent for describing locations in a way that makes them come alive. There were also a few interesting game mechanics. At one point in the game, you are forced to take part in a series of fights with a small group under your command. You need to choose which fighters join each round and which sit out. The battles themselves are a game of rock-paper-scissors with the three different types of weapons, so ideally, you’ll want to match fighters with weapon advantages against the enemies. But those fighters can also be injured, and if you send them into another battle wounded, they may well die. You can try to tend to their wounds between battles, but doing so costs you time that could be spent training the rest of the group to make them more proficient with their weapons. This was a fun mini-game, albeit a regrettably brief one. 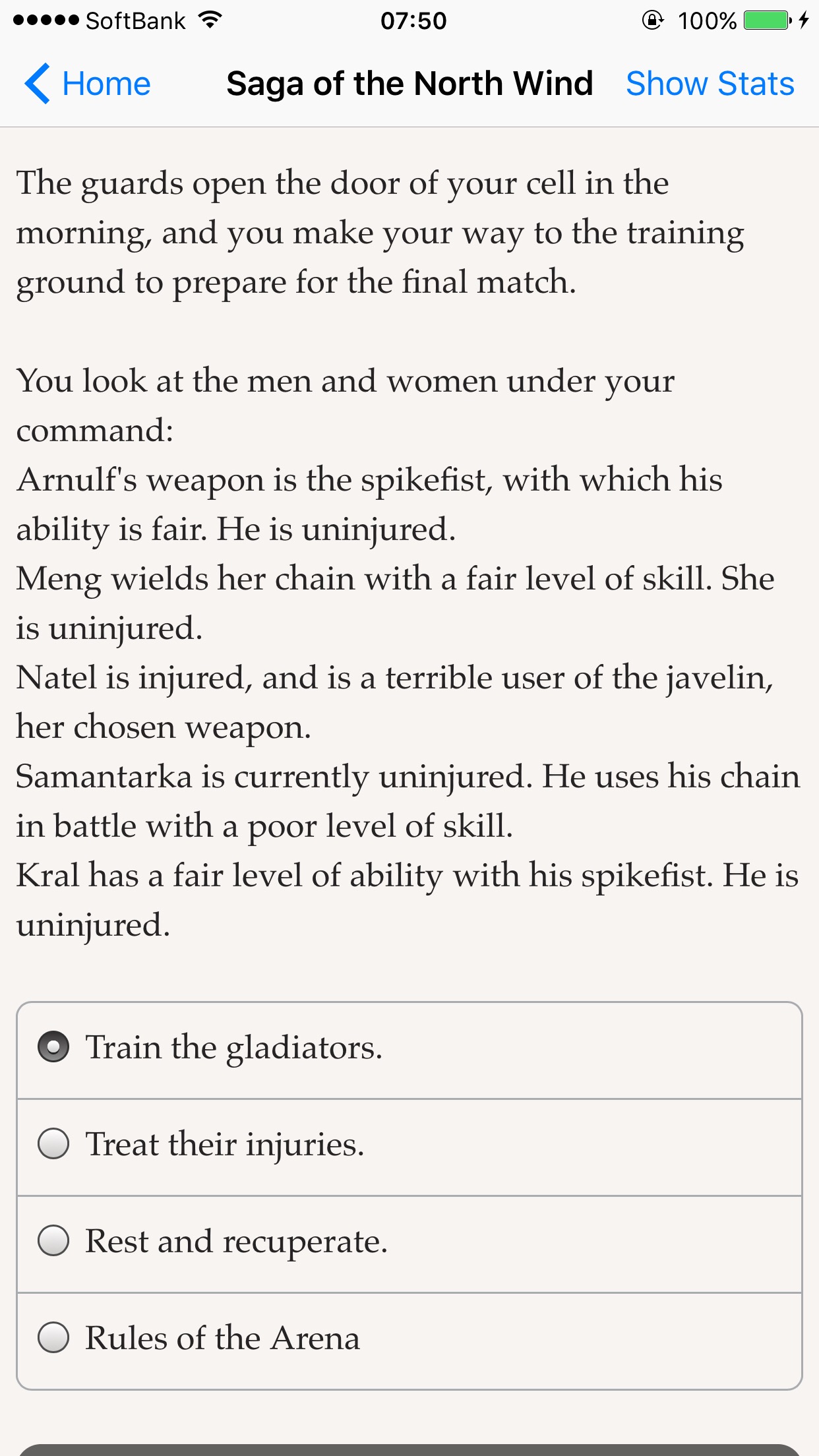 You also need to mind your provisions and resources, take care of your tribe’s numbers, and do your best to maintain the favor of the gods, lest you need to call on them in moments of despair. You’ll actually probably be calling on them a lot. They should hook you up with a family plan or something. There’s an additional mini-game called Crown and Ring if you should find time in your chieftain’s schedule to play it. Although your choices and accomplishments don’t carry a lot of narrative weight, it’s at least fun trying to chase down all of the achievements. There’s quite a robust selection of them, and they will require you to explore branches you might otherwise ignore. I’m not sure if it’s worth replaying a largely-similar story to get them all, but hey, if you like them, here they are.

I had a decent enough time on my first run through Saga of the North Wind, and chances are that if you are at least interested in the basic story set-up, you will too. It was only on subsequent playthroughs that the small cracks I spotted on my initial play broke wide open, dampening my enthusiasm for the game on the whole. If you don’t usually replay gamebooks, you’ll probably enjoy the Saga of the North Wind for its epic plot and flavorful text. On the other hand, if you’re the sort that likes to get all of the endings and keep playing to see where all the choices take you, Saga of the North Wind may well leave you feeling as weary as the travelers in the story itself.