While Nintendo’s Super Mario Run is intrinsically a Mario platformer, there are obviously a few things that differentiate it from other titles in the series. In fact, the auto-run nature of the game essentially means that veterans of the platform need to remaster the controls to a certain extent. This is especially important if you plan on beating other opponents in the game’s Toad Rally mode. Toad Rally mode is a challenge mode that requires rally tickets and is a highly competitive mode where you race against a person’s avatar to get the highest score, which is a combination of coins collected and flashy moves in order to impress the toads watching. Obviously, such a mode requires great mastery of the controls to win, so check out the following tips and tricks in order to be the ultimate runner. 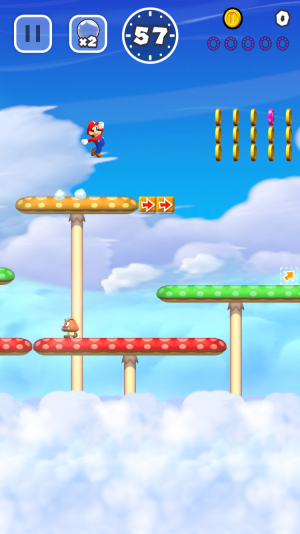 Like other Mario games, Mario will jump higher depending on how long you tap on the screen to initiate a jump. While it takes a little bit of time to master, knowing how high (or how low) to jump is one of the essential tools for making sure that you beat the opposition. Why? Because if you jump to high you may miss out on a secret passage or miss an enemy that can propel you faster through the level. Conversely, if you don’t master the art of the low jump, you could also miss out on both enemies and secret areas. It’s also important to note that Mario will automatically jump over enemies and small crevices, so if there’s a secret coin or passage way in between, you need to learn how to aim and manually jump into them.

What’s the best way to master jumping? Well, through practice of course. Play the first level and try jumping with various tap lengths to see

Be Mindful of Mario’s New Moves

There aren’t a lot of them, but Mario has some interesting new moves in Super Mario Run. Some of them activate automatically depending on the environment while others require the aid of tools that can be found in the levels. For example, Mario can now grab ledges and pull himself up if he gets near the top of a platform. This is a pretty significant new move because now you don’t necessarily need to have a full clearance jump to reach a new location – you just need to get close enough. In terms of Toad Rally, having Mario grab a ledge is typically a good thing because odds are it’ll let you to more coins or cooler moves to attract more toads. 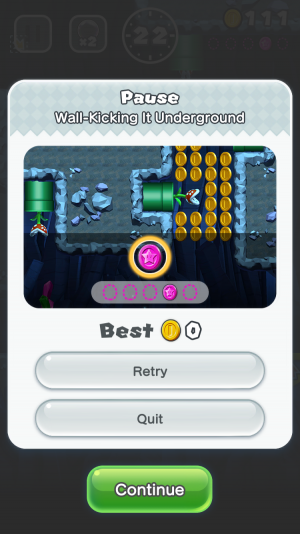 Another move that’s been advertised heavily is the wall jump, which has now become an essential element of Super Mario Run. You’ll notice that a significant number of levels are vertical oriented, which translates to a lot of vertical platforming. Obviously, the easiest way to build levels around this is to have lots of wall jumps. In terms of executing, wall jumping is fairly easy – just tap on Mario as he slides on a wall to jump in the opposite directly. While the execution is fairly simple, levels will quickly start testing your timing as you’ll need to tap with some precision to wall jump between enemies or in order to get to a specific platform. More importantly, if you want to succeed in Toad Rally you’ll need to learn how to wall jump fairly quickly and precisely in order to reach the good areas of a level filled with coins.

A third new move that we’ll discuss is the long jump. Some levels will have speed blocks that will propel Mario forward if you jump while he’s on them. These long jumps are key to landing the most coins (or secret coins for that matter), going fast through a level, or to reach a new area. They’re also some of the flashiest moves that are most likely to help you earn toads in Rally. Unlike the wall jump or the climb, the long jump probably requires the most practice, as you’ll need to be very familiar with how Mario propels off those blocks in order to effectively time them and get the most coin (and flash) for your jump. As with most things, the easiest thing to do is to find an early level (Level 1-3 is a good one) with some long jump capabilities and practice to your heart’s content before trying a Toad Rally.

Finally, there are a few level elements that also mess with the auto-running nature of Super Mario Run. A stop block will cause Mario to stay put until you tap on the screen to proceed. There are also blocks that will change the direction Mario runs in (or jumps for that matter). Both must be used to master jumps, opening up the potential for new areas with additional coins. When you encounter these in a level, keep in mind that typically means a ‘timing’ section is coming up and plan accordingly. Specifically, when you encounter a stop block, survey the area ahead of you and try to time your movement forward. As far as the directional blocks are concerned, make sure Mario is firmly on the ground before you try and execute a jump (otherwise you’ll just try and jump forward at a small pace).

This last general tip has less to do with the controls, and more to do with finding the best sections in a level to help you win in Toad Rally. Obviously, if you have rally tickets to spare, you can go at your own pace and study the avatar you’re racing against to see if they find special areas that you overlook. But honestly, most of these areas can be discovered by following the clues. Levels are littered with arrows and coins that all point towards a certain action, such as jumping at the right spot or taking the right path when presented with choices. Learning and following these non-verbal cues are the best ways to discovering the locations with the best rewards, raising the likelihood of you beat your opponent.

The above are just a few tips for mastering the controls and taking on the opposition in Toad Rally, but honestly it all comes down to practice. Obviously, stick with us as we continue to put Super Mario Run through its paces and offer even more tips for success.