As is the case with most Mario games, Nintendo’s Super Mario Run has a load of secret content in each level. The clearest evidence of this is in the game’s use of secret coins, which are differently colored coins scattered across the map in typically out of the way (or hidden from sight) places. Super Mario Run keeps track of your collection of all these coins, and if you collect the full batch, the game will unlock another set of coins that are even harder to find. Earn these and you’ve demonstrated complete mastery over that level. While this guide doesn’t go through the coin locations of specific levels (those will be coming soon), this guide will lay the foundation for any player looking to find coins with some general tips and tricks.

Don’t Look on the First Run

This may or may not seem obvious, but when you’re going through a level for the first time, I highly recommend that you don’t go in with the priority of finding all the secret coins. Instead, I’d recommend that you go through the first run on a level with the express purpose of making it out alive. In fact, if you’re looking to achieve true mastery of a map, this is how I’d recommend you do it. 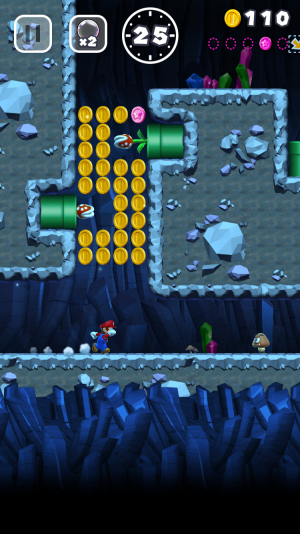 So, once you’ve played the level a first time, I’d play it again with the purpose of learning the most efficient way to complete a level. At this point, the goal isn’t necessarily to locate or earn the secret coins, but it’s to take a longer look at all the different ways to complete the level. This is also a good time to start surveying some of the hidden nooks and crannies which may lead to secret coins.

Once you’ve done that, now you start playing the level to identify (and possibly earn) the secret coins. Start taking unique risks in the areas of the level that look like they may have a secret coin. If you see one out of reach, start thinking about the surrounding environment and how you can use it to capture that coin. You may be able to earn some of the coins on this run, but the goal is still surveying at this point.

By the time you’re on your fourth run, you should have an understanding of all the elements of the level, where the coins are, and how to reach them. Use this playthrough to just capture them all and master the level. Some folks might complain that four runs of a level is a bit too excessive to find all the coins, but they have to remember that Super Mario Run rarely stops, so you’re going to go through levels at a fairly quick pace, which will make it hard for you to identify  and adjust what you’re doing to find those secret coins. By playing through it a few times with specific goals in mind, you’ll be able to get to the point where you can make those adjustments with ease to find those coins. 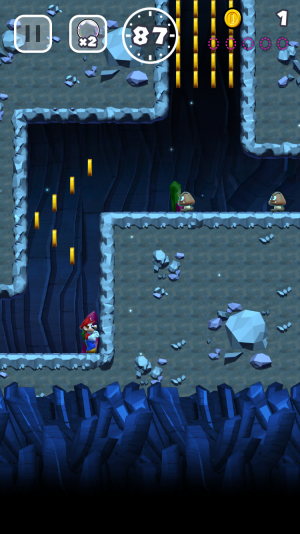 Once you get the first batch complete and the second batch opens up, I’d recommend repeating Steps 3 and 4, above. In fact, you may need to repeat Step 3 a few times depending on how crazy the level is.

This tip basically works for anything you’re trying to accomplish in Super Mario Run, but it’s even more important when it comes to the secret coins. Throughout each level, Super Mario Run will throw tips at you in the form of coins that seem to lead to an area or arrows or special blocks that indicate something. Sometimes these lead to easiest paths to complete the level, sometimes they lead to more coins or cool moves to perform (for Toad Rally), and sometimes they lead to secret coins. It’s this last reason that I recommend you should follow the cues, at least for the first run or two and see if they lead to a coin. It’s highly possible they don’t and if so, just note it and move on. However, more often than not, they will most likely lead to a secret coin.

Once you get to the second batch of coins, the cues become far more nuanced. The game expects you to have mastered the level and the coin placement will indicate that. If you followed a complicated cue and got nothing in first batch, try again with the second batch to see if that’s a new reward.

While this is obvious in the scheme of finding coins, it goes without saying that you’ll need to master ever move in Mario’s arsenal in order to get these. You’ll find coins fairly early on in the game that require you to master wall slider and jumping to just before you plummet to your death. You’ll have to time your jumps perfectly to climb up platforms that you can’t otherwise reach. You’ll need to learn how to jump backwards with directional blocks or hit the long jump with their special blocks. These are all things that require practice so if you see a coin that requires one, and you just can’t quite figure it out, find an earlier level with that element and practice until you’re comfortable.

I personally advocate people discovering and earning coins on their own, but hey if all else fails you can always find a video online of someone doing it. Obviously, you may not find them right away at launch, but they’ll eventually propagate. It’s probably best to just go through the levels for fun at first and then move into the secret coin collection once you’ve become familiar with the gameplay mechanics.

Well that about covers it. Do you have any specific tips or tricks for earning those elusive coins? If so, leave them in the comments.