When Nintendo announced that Apple Stores would have demos of Super Mario Run a week in advance, my initial reaction was “cool!" followed “Wait, I’m going to have to go to the mall during Christmas shopping season." Once again, the mall has become my Waterloo. Yet, it wound up being not that bad: not much traffic, easy parking, no wait to get an iPhone to play the game. I was able to play Super Mario Run in peace. My experience with Super Mario Run followed a similar narrative arc: initial excitement, then a bit of disappointment, before realizing things were actually pretty cool. 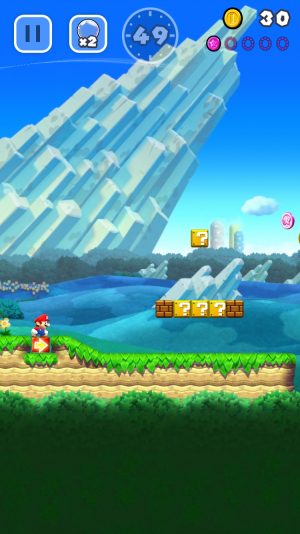 I’m looking forward to how the world reacts to Super Mario Run because I think the game needs a little bit of time to click with players. It feels like a Mario game enough, there’s just some little things that go against expectations. The jumping mechanics exist in this uncanny valley between being kinda like what you’d expect from a Mario game, and something you haven’t played before. For example, bopping on enemies is something you have to get used to, because you will automatically jump over enemies when running. So to hit the goombas, koopas, etc., you have to tap as you pass over them. So, bouncing off an enemy to get greater height has an unorthodox feel to it because you have to initiate the head-bopping action and then tap and hold to get extra height. Many item boxes are laid out in such a way in which it’s impossible to hit all of them because many are not spaced out. Mario has a brief hover move that can get a little bit of width on jumps, and you have to use his ability to climb on ledges to get some platforms. It feels a bit weird for a Mario game.

And because of that, you might not like Super Mario Run right after you pick it up. I can see the churn rate being high on this one. But stick with it, because as the game’s unique quirks started to become more familiar, the game started to be a lot more fun. But right after downloading, the first 5 or 10 minutes? I could see a lot of people dropping the game because of how odd the game feels right off the bat. But as the more difficult level challenges pop up, and the clever challenges to get the speical coins start to test you? The promise starts to kick in. I only got to see so much of the platforming elements – the first 3 levels are fully playable, and a 20 second run of 1-4 is available – and things like the backwards arrows only pop up near the end. There’s a lot of potential here. 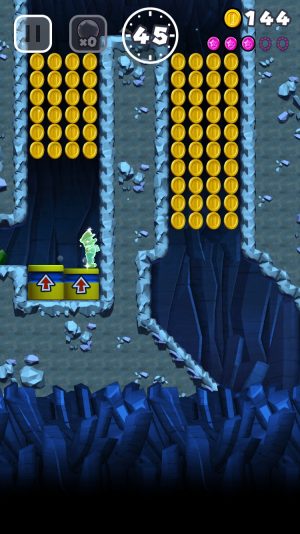 In particular, getting the special coins feels like it’s going to be a particular test. Getting the first round of special coins feels easy enough. The second round of coins is a bit trickier. The third round is downright devilish…and that’s just on 1-1. Later levels promise to be nightmarish challenges for completionists, and I’m interested to see what feats of platform daredevil action people will have to execute.

The bubble system is a clever way for Super Mario Run to offer both a lives and quasi-checkpoint system. If you die, then a bubble will be used to bring you back to an earlier spot in the level. But if you’re playing normally and miss a special coin, for example, then you can use a bubble that picks you up and can be popped at any point, though the bubble goes faster the longer you wait. But this does mean that if you miss a coin, you can go back just a bit and make that jump you need. Mario always runs to the right and will try to turn back that way shortly after landing on the ground, so if you need to backtrack, you’ll need to find a more allowed method.

Oh, and the game is perfectly playable with one hand, there are no issues with that at all. This will be a great game to play on trains and buses, for sure.

I will say that Super Mario Run, even just from the demo, feels like nothing else in the endless/auto-runner space. Which I guess is to be expected, because it’s Nintendo. If you expected their mobile stuff to be normal, well, you don’t know Nintendo. If you play the demo, be wary: if you accidentally quit or leave the level select screen, progress resets.