It’s interesting to see just how much mobile development has influenced the PC market. More and more we’re seeing newer experiences that are formed around the same concept as Jetpack Joyride, whether it’s of the endless or linear variety. The types of games prone to that control scheme work with touch, traditional remotes, and a mouse and keyboard. It’s universal, and something gamers of all skill levels can pick up and play. It’s a shame I only noticed RunGunJumpGun ($2.99) when it hit the mobile arena, because it really deserves the attention.

While I’m keen for a good old fashioned limitless romp, I do appreciate the fact that some games end. That in part is what enticed me to check out RunGunJumpGun, as it contains a typical level system that you might find in a retro platformer. And retro it is, not just in terms of the art style (which hearkens back to the purple retro hues of ’80s sci-fi), but the engine itself. It looks and feels authentically old school, and the consistent framerate ensures that there won’t be any hangups like lockups and inconsistently smooth visuals. 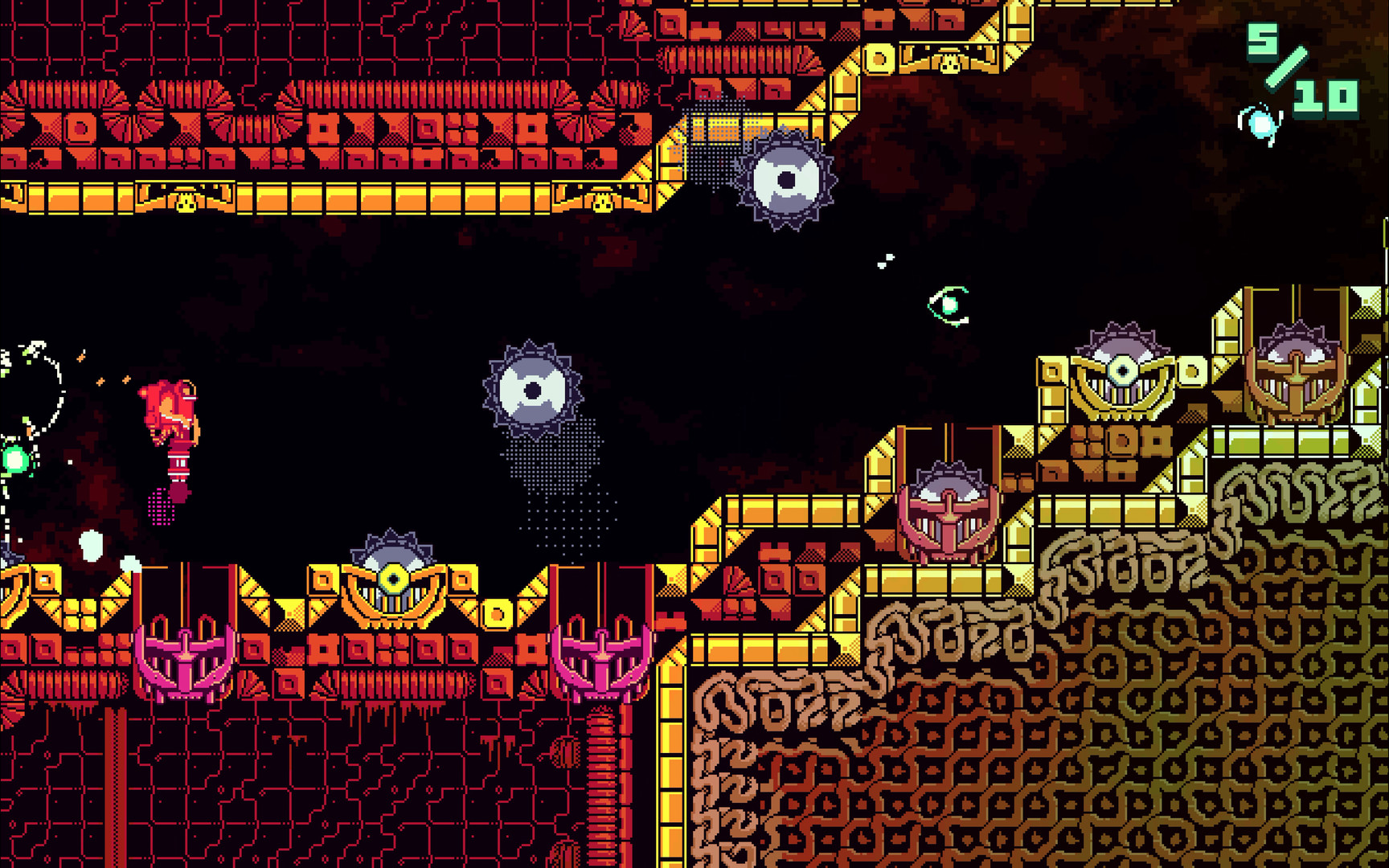 Here there’s a beginning and an end, a clear course to strive for. There’s one type of collectible to grab during any given mission, which are required eventually and provide as a progress gate, but for the most part you can spend any given level getting accustomed to the layout. Then, through practice and tenacity, you can learn the ins and outs of each hazard that impedes your progress and eventually conquer it. The “one more run" feel is still there even if you’re just replaying the same layout over and over, attempting to collect each Atomik orb.

All of this is set to the tune of a post-apocalyptic world (with you playing the part of the nameless “Scavenger"), which, as unique as it is while the actual action is playing out, is mostly forgettable. There’s cool concepts afoot like the eventual destruction of the sun, and thus, all of mankind as we know it, as well as the introduction of multiple alien races, but it never really gets a chance to spread its wings. No, it’s mostly an arcade-like game that’s content with peppering in bits of lore as it pleases, which works both for and against it, depending on what kind of experience you’re looking for. 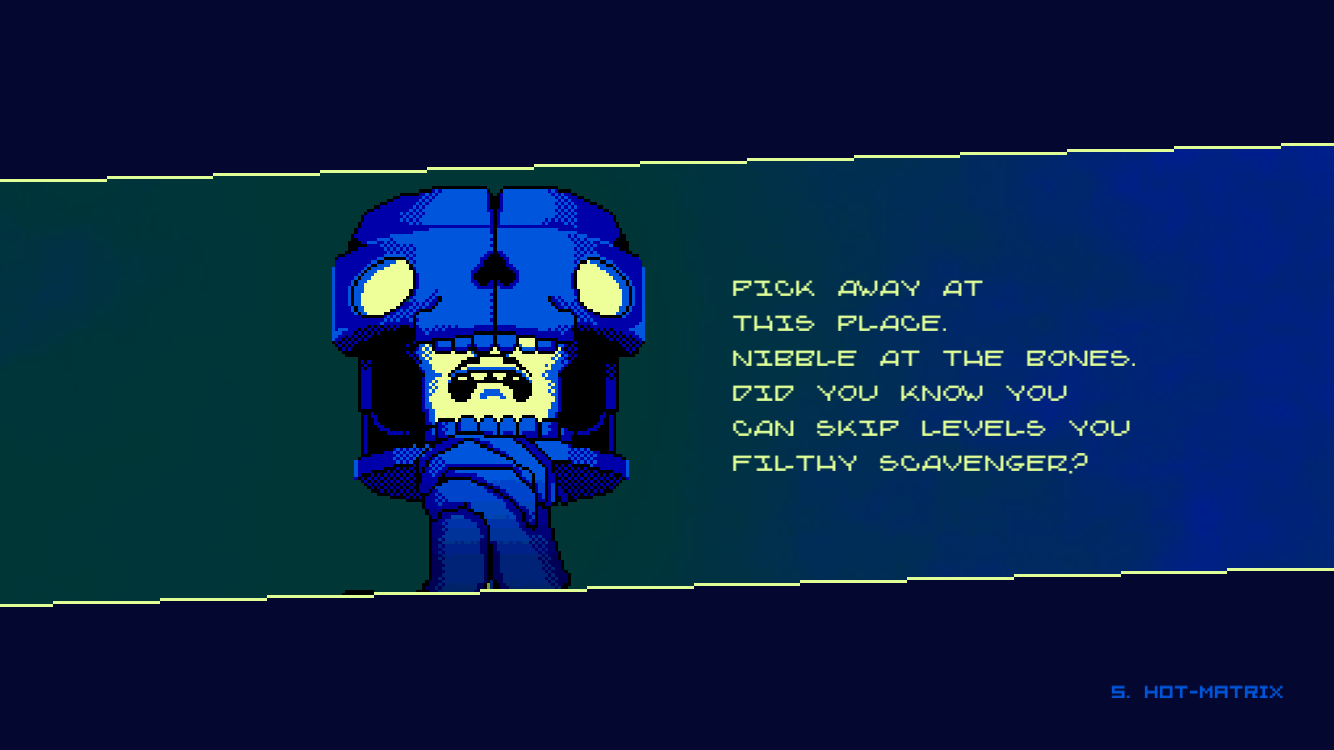 You will need to master said controls, mind, as they still involve a lot of nuances despite the two-function veneer. One side jumps (and shoots downward), and the other shoots forward, true, but you’ll need to constantly swap between the two to navigate pits, spikes, and the ever-scrolling screen that can leave you behind. For instance tapping on the jump side will provide a quick hop, and holding it down lets you fly endlessly. But you’ll often need to tap, let go, then tap again to weave in and out of buzzsaws, enemies, or good old fashioned walls. Oh, and let’s not gloss over the introduction of water worlds (that come at the perfect time), which work at a downward angle, and thus, completely destroys all of your previously held notions.

Jump canceling, and then shooting forward to blow open a door and jumping again is a skill that’s paramount to your success, and it’s amazing that all of this can be done with just two functions without every feeling cheap or overly crude. Across the three planets on offer it doesn’t ever get old, because while the levels themselves are static, the screen is moving so quickly that you can’t really stop and smell the roses so much as react to what’s going on around you. The electric soundtrack doesn’t hurt when it comes to getting you in the mood either.

There aren’t any hidden strings attached either, as you’re buying everything with your three buck purchase. There’s no power-ups, boosts, or extra characters to spend $0.99 on, just 120 levels and a marathon mode that strings together multiple stages. Nothing about it feels pandering or cheap — no, RunGunJumpGun was created by developers who are not only passionate about old games, but the sci-fi genre in general. It might not have a compelling story that stands on its own, but everything else about it does.