Let’s be honest: Kemco’s RPG release schedule on mobile has always been pretty absurd. They’ve only been at this for around five years on smartphones and they’re nearing 50 RPGs on iOS in English, and even more than that on Android. That works out to an average of just under one RPG per month for five years running. Now, there’s a fair bit of repetition from game to game, particularly if you’re just looking at the broad outlines, but I feel they’ve historically been able to mitigate that issue by keeping a handful of developers on tap. This has helped differentiate the Kemco catalogue, to at least a small extent, and has also ensured that each developer has a bit of a buffer between releases. 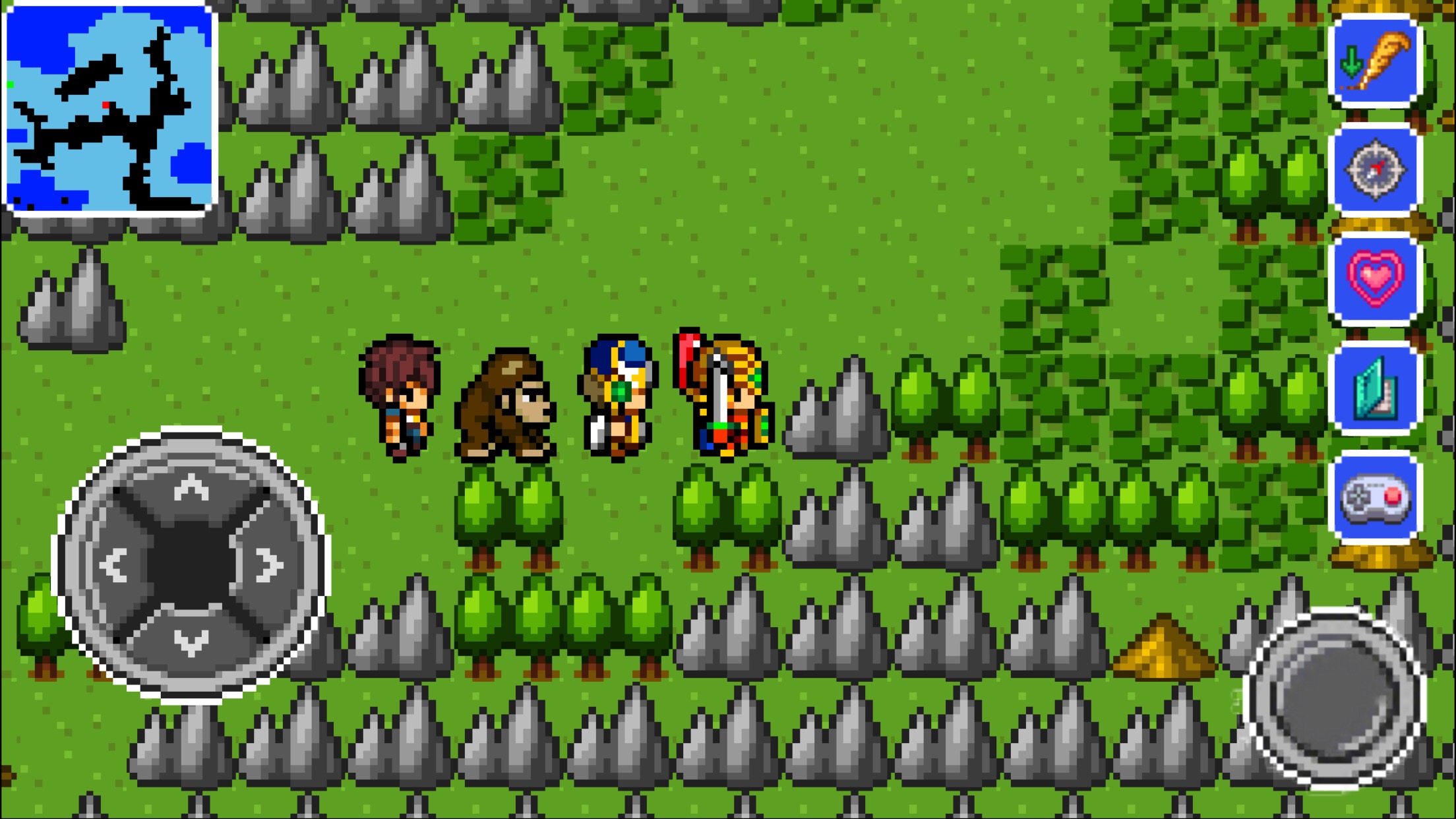 I feel like that has broken down in 2016. Of the four regular developers Kemco used to use, two of them have barely done a thing this year and one of them seems to have gone goofy after getting a taste of that sweet free-to-play cider. That has left the fourth developer, EXE-Create, largely by themselves this year to keep things going. In previous years, we would see two or three games handled by EXE-Create. The game we’re looking at in this review is their sixth RPG this year, and there should be another one or two coming before the year is up. Even the most ardent of Kemco fans has taken notice of this, and they’re a group predisposed to forgiving levels of recycling that would make Captain Planet say, “Hold the phone."

Dragon Sinker (Free) initially appears to be a breath of fresh air. Instead of going for detailed, high-resolution graphics, this game opts for a retro 8-bit throwback. That applies equally to the sound and music, which aim to ape the 8-bit Nintendo era where Dragon Quest ($2.99) reigned supreme. Even though we’ve seen our fair share of faux-retro games on mobile, I think we’ve hit a point where it’s exciting to see any differences in a Kemco RPG, let alone something so front and center. Sadly, it only takes a few minutes of playing to confirm that this is just a novelty coat of paint on top of the exact same 2D engine EXE-Create usually uses. Play a little more and you’ll realize it’s similar to their typical fare in a lot of other ways, too. This is, to be frank, one of the worst impressions of an 8-bit era RPG I’ve ever seen. It’s a 2016 EXE-Create RPG masquerading as an 8-bit Dragon Quest through nothing more clever than wearing a cardboard box that has “Dragon Quest" scrawled on it in blue crayon. 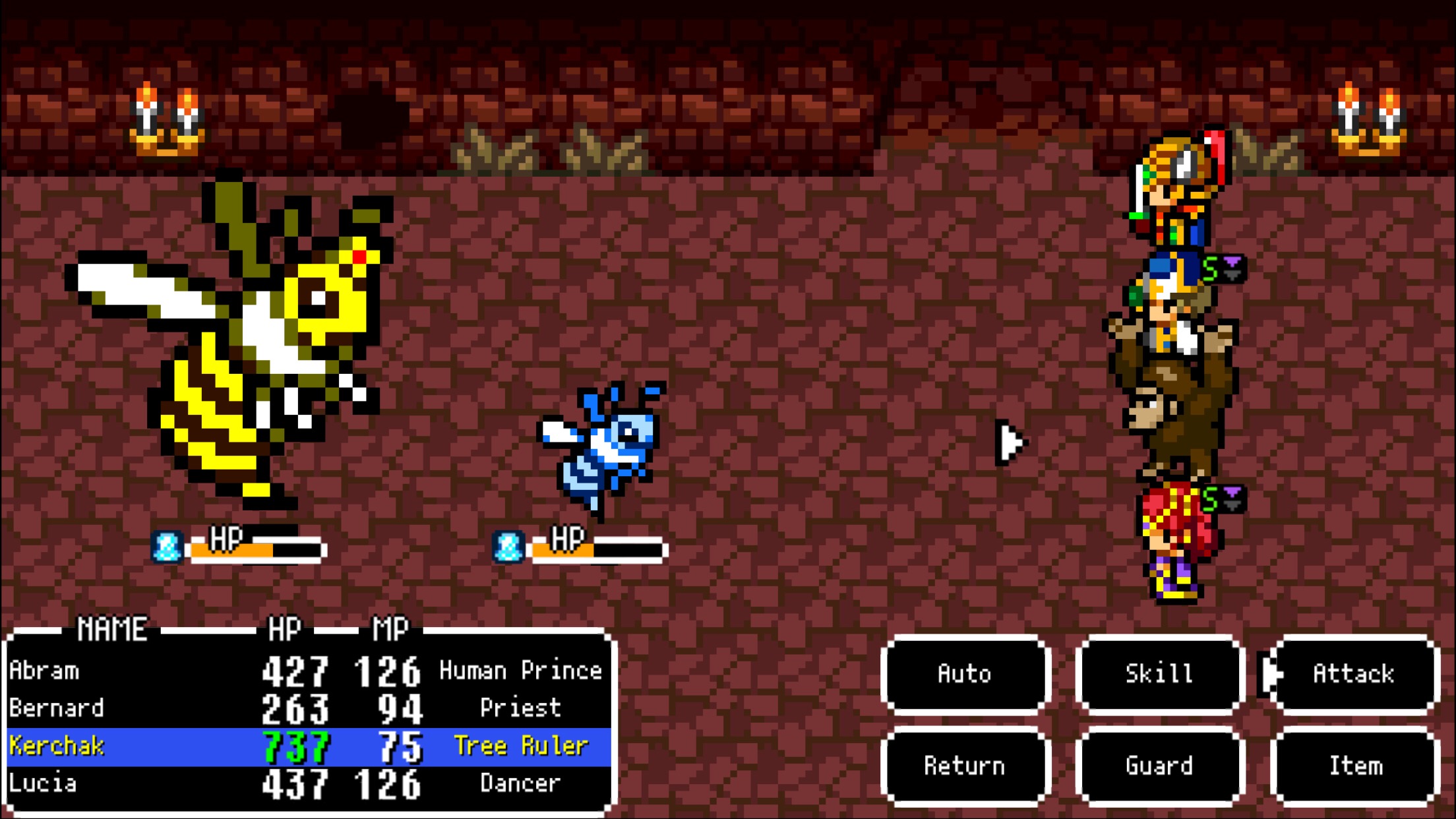 At the very least, it’s a good 2016 EXE-Create RPG, though. It might just be their best one this year. Oh, a lot of the mechanics are copied and pasted, to be sure. The battle system hasn’t changed much, nor has the basic quest structure. Multiple difficulty settings, extra endings, some post-game challenges, all the usual business. Since it’s using a new art style, it suffers from a similar problem as their first 3D game, Alphadia Genesis ($9.99). Enemy sprites are used, re-used, palette-swapped, and blown up messily to stand in for bosses. There are only three or four songs in the entire soundtrack, and I have to say, they’re not that great. EXE-Create is clearly not as comfortable working in faux 8-bit style as it is in its usual house style. The game can’t even decide on what size its pixels are meant to be, creating some ugly and inconsistent visuals when various elements are brought together.

The thing that saves Dragon Sinker is its excellent approach to party building and character development. The system it uses is creative and enjoyable. Basically, there are three main heroes in the game. Each of them acts as the leader of their own team within the overall party, and you can easily switch between them as necessary without much hassle. One team acts as the active team in battles, but a simple command will tag in the others. Beyond the heroes, the remainder of each team is drawn from various characters you’ll meet along your journey. Some of them are mandatory, but the bulk of them are found by completing side quests, which finally gives a strong incentive for even non-completionists to finish them. You can also get new party members by playing a lottery using tickets or the game’s premium points. If you’re lucky, you’ll get a powerful animal buddy that can’t be found any other way. 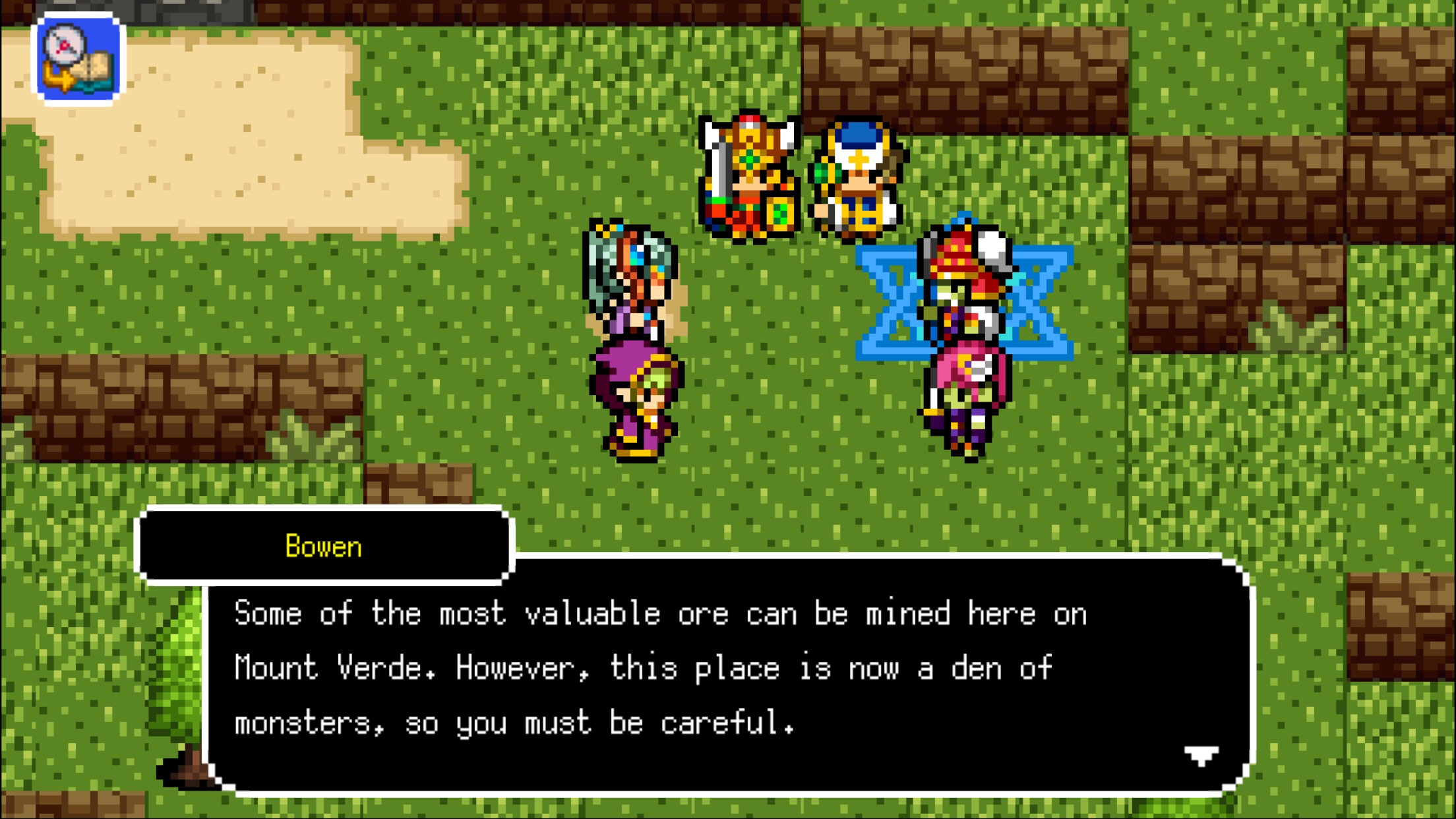 Party members aren’t just there to be warm bodies for enemies to smack around, though. Most of them come with their own unique job class, and this is where things get really interesting. Characters can switch jobs in most towns, allowing you to set up your party in the way you feel is most beneficial for the situation. You’re limited to the jobs of the characters you’ve recruited, so anytime you find someone with a new job to join your team, every character potentially benefits. As you fight battles, you’ll earn experience points and job points. When a character’s job reaches level 10, they’ll master the job and be able to carry over its unique auto-skill to other jobs. They’ll also produce a scroll that can be used on one of the heroes to give them that auto-skill. Each job can only produce one scroll, so you’ll have to think about how you want to split them between the three main characters.

Another point to consider is each character’s race. Your teams will be composed of human, elves, and dwarves. Different compositions of the various races will give your team a variety of bonuses. Stacking dwarves, for example, will make your party almost entirely resistant to status ailments, which is a godsend in certain areas. Humans tend to prop up their team leader with stat buffs, while elves offer resistance against debuffs. There’s a lot to consider here, and as with any game with a good job system, you can break the game sixteen ways to Sunday if you match up the right skills and characters. This is definitely the best implementation of a job system in any Kemco RPG thus far, and it’s strong enough to carry the game most of the way through its 15 or so hours. 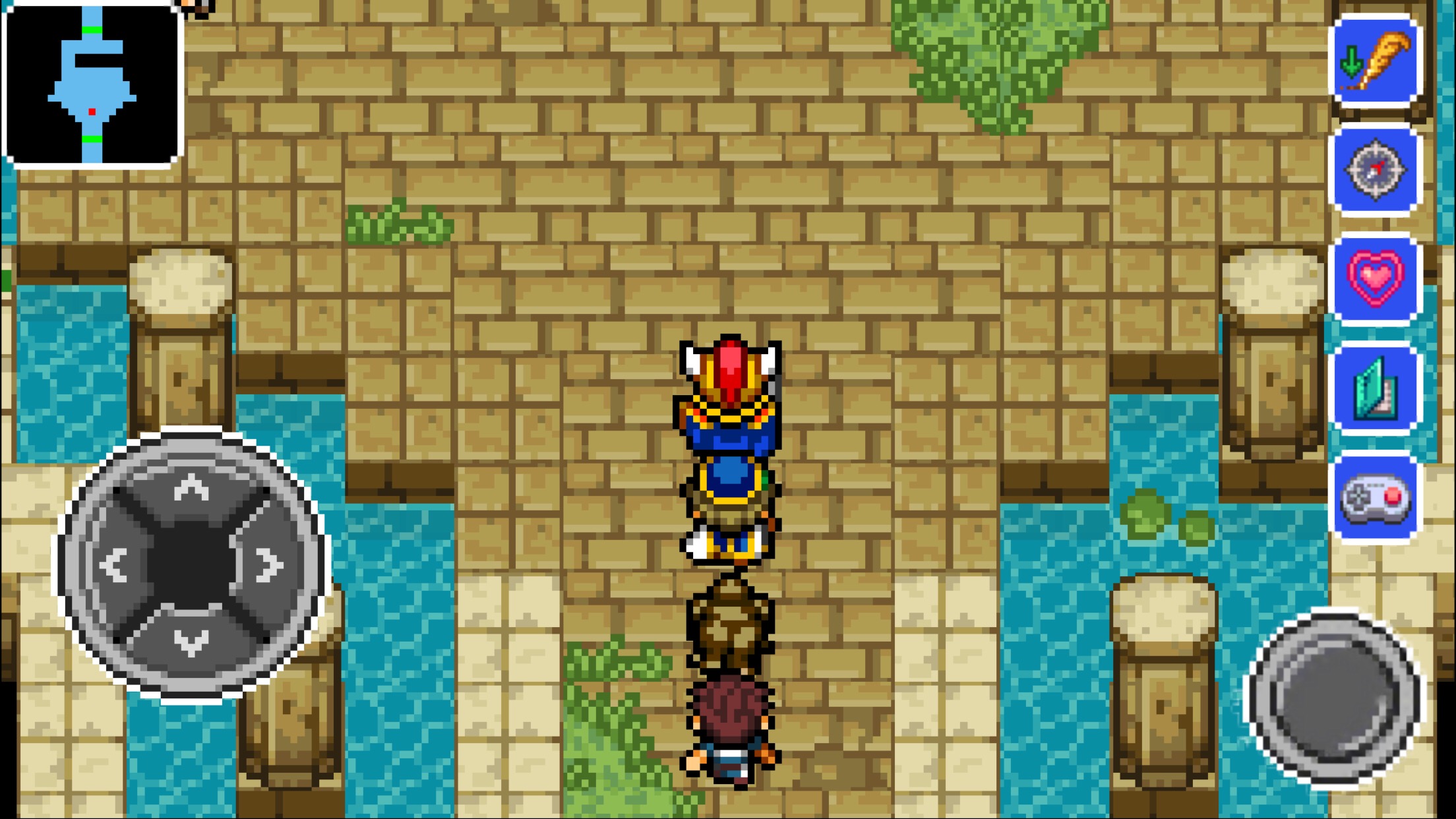 That’s a good thing, because the story and characters sure aren’t going to do that work. EXE-Create’s usually good at character interactions and just serviceable at main plots, but both of those things are quite weak here. The translation’s not too bad, but oddly, that only serves to break the illusion of this being a retro game. It doesn’t help that the characters are representing relatively modern tropes, with the lone concession to older times being that the human hero is a silent protagonist. Well, sort of. You’ll still have to put some words in his mouth now and then via simple branching dialogues, but Dragon Quest does that a little bit, too.

As with several other recent Kemco games, Dragon Sinker is available in a free, ad-supported form or as a paid premium app. The difference between the two is that the premium version doesn’t have ads and gives you a fairly large quantity of the game’s premium currency. You can also earn that currency in-game from battling enemies, so you can conceivably grind out everything if you want to. The shop contains the usual selection of cheat items, including experience doublers, extra job scrolls, and so on. Nothing essential for finishing the game and nothing connected to the story, so if you’re tight on cash and don’t mind the ads, the free version will do you just fine. 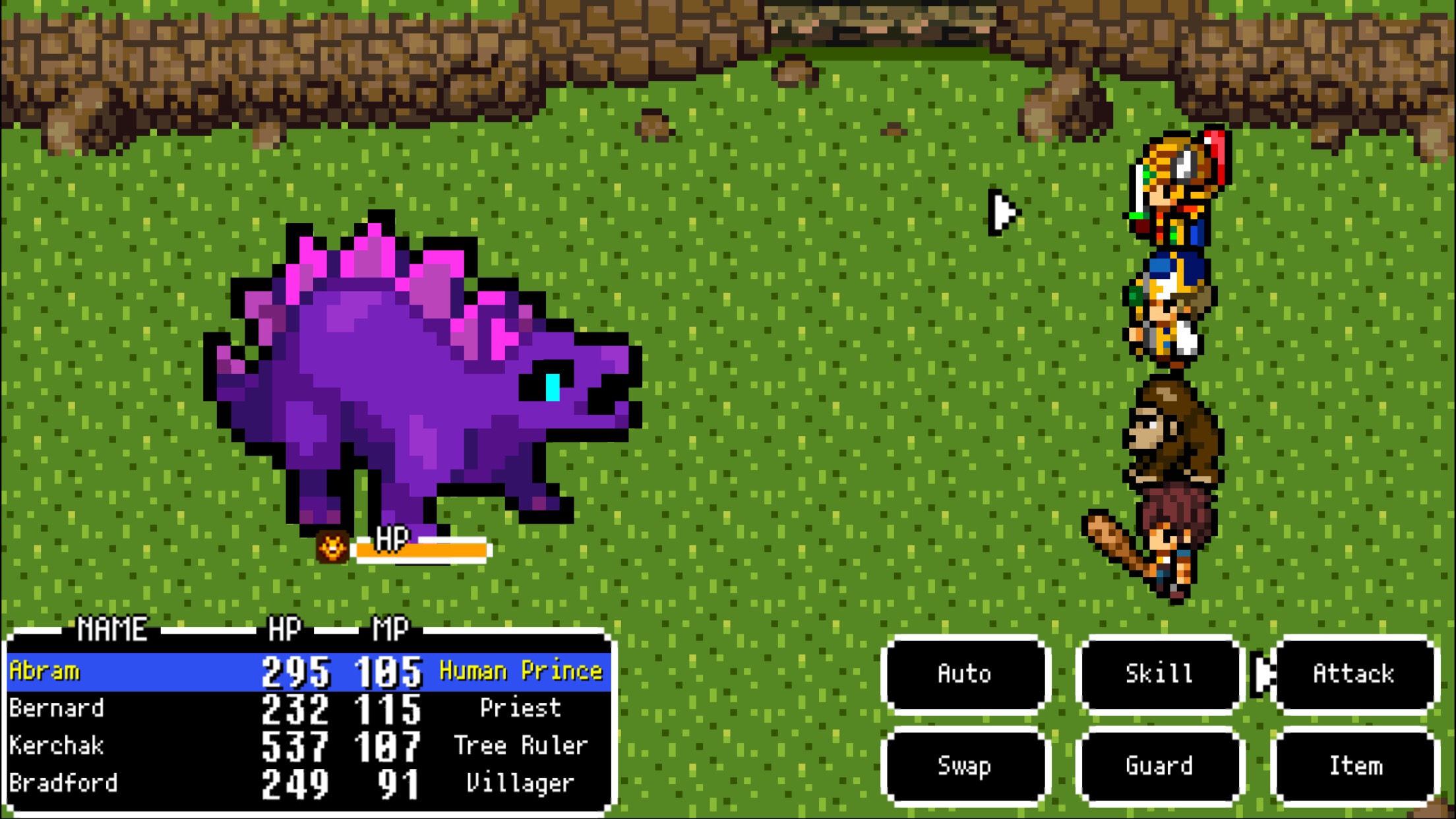 Even with it spinning its wheels in a variety of ways, I found Dragon Sinker to be very satisfying from a mechanical point of view. The new job system gives you a lot of freedom in developing your characters, and I really enjoyed how the new job unlocks were connected to recruiting characters through side quests. The faux-retro presentation fell a bit flat with me, but I suppose it’s nice to get an EXE-Create game with new assets and no butt-rock guitar licks. Those looking for an authentic old-school experience, a good story, or something totally fresh will probably want to keep away from this one, but if your ears prick up at the mere mention of a job system, you’ll likely have a very good time with Dragon Sinker.