The original Pumped BMX ($1.99) was a fun, surprisingly deep side-scrolling stunt game that combined elements of Tiny Wings ($1.99) and Trials to great success. The sequel, Pumped BMX 2 ($1.99), completely blew the first game out of the water. The highlights included a dramatically-improved presentation, a deeper trick system, and a better set of controls that made pulling off intricate maneuvers much easier. It was such a big step up from the first game that it was hard to see where the series could go in a sequel without completely tearing up the carpet. That seems to have proven true, as Pumped BMX 3 ($2.99) isn’t nearly the upgrade that the second game was over the first. There are some significant additions, but nothing that really changes the game in any major way. Whether that’s a good thing or not depends on how well you’ve enjoyed this series until now.

Probably the biggest new element is the addition of 15 real BMX professionals to the game. Each has their strengths and weaknesses, and just having them present adds a lot of legitimacy to the title. The number of tricks has increased from 16 to 24, offering a whole new tier you can access at the tap of a button. The challenge system has been changed, offering up a bunch of goals to shoot for initially instead of grouping them off. That makes it easier to unlock later levels even if you’re stuck on a particularly troublesome goal. Naturally, there is a whole new set of levels to play as well. In total, there are 60 levels here, spread across 6 different environments. That’s a good chunk more than the already healthy total of 50 found in the last game. Thanks to the changes in the challenge structure, each stage has more for you to do than in the previous game, with a total of 720 challenges. 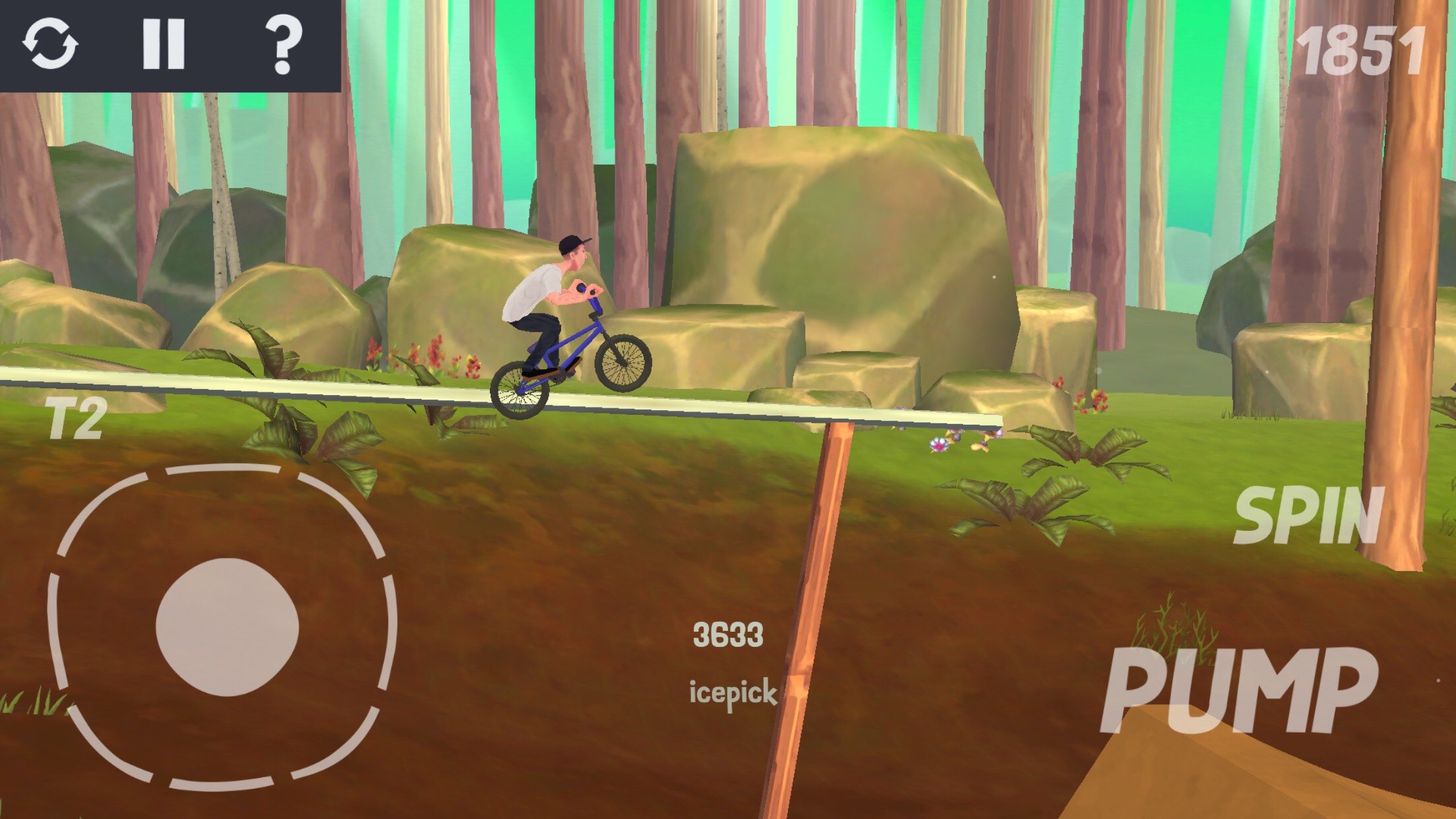 That makes Pumped BMX 3 more of a content sequel than anything else, but I think that’s just fine. If there were some unaddressed glaring flaws in Pumped BMX 2 that needed fixing, I might be more upset, but developer Yeah Us! hit the mark squarely last time. I continue to be impressed at how much complexity they’re able to squeeze out of hardware that isn’t well-equipped to handle multiple simultaneous inputs in a fast-paced game like this, and the level design is simply top-notch. The difficulty ramps up fairly quickly, but you’re able to skip ahead if you run into anything that you can’t pull yourself over. Perhaps because of that, the developers get to go wild with the level designs pretty early on, making this a really fun set of courses for seasoned players.

If you’re new to the series, Pumped BMX basically has you running short side-scrolling courses, trying to perform tricks on the way to reaching the stage goal. The key to surviving is in keeping your momentum going, which you can do by holding down and releasing the pump button with good timing. As in Tiny Wings, you’ll want to hold the button to descend into hills and release it just as you’re about to jump in order to get the most air. That will not only allow you to reach the next jump, but also give you time to bust out some tricks. A virtual stick on the left side of the screen can be flicked to pull off a variety of real BMX tricks. Rotating your device will tilt your character forwards and backwards, letting you perform flips and backflips. A spin button above the pump button does just what it purports to. 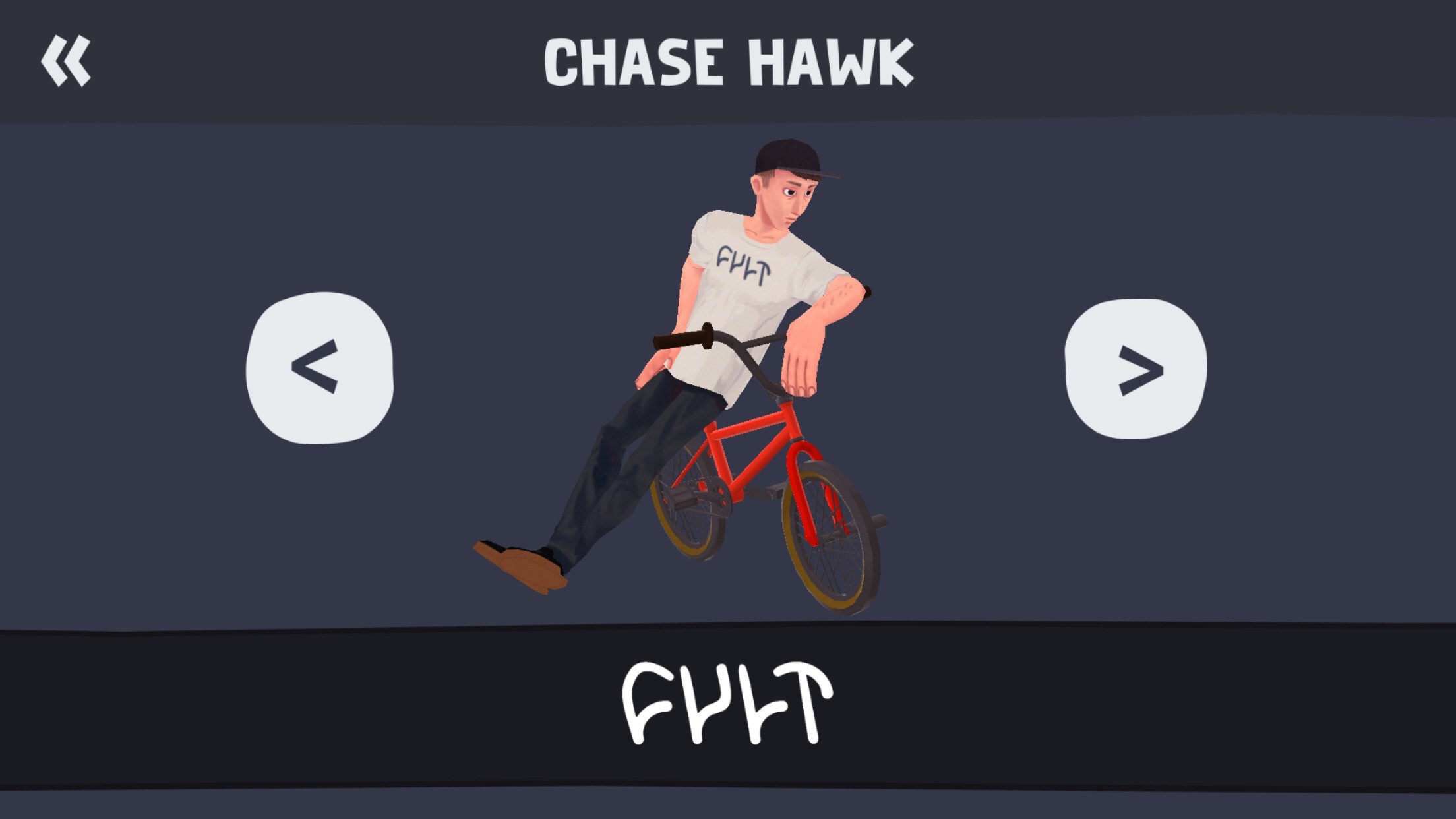 Combining all of these elements into massive, high-scoring tricks takes some serious practice. At first, it can feel like rubbing your belly and patting your head while running in circles, but if you can manage to get a grip on things, it’s truly outstanding how versatile the controls are. It makes me wish that there were longer stages, because the majority of them are over in the blink of an eye once you know what you’re doing. Completing all of the challenges is a whole other ball of wax, but I would love to play around with this trick system even more than the game already offers. The biggest downside here is that if you can’t deal with tilt controls for whatever reason, you’re not going to be able to play Pumped BMX very well.

New levels open up by completing challenges, and the targets are such that even if you’re not terribly good at the game, you’ll probably still be able to get just about every level unlocked. As I’ve already mentioned, the difficulty curve in Pumped BMX 3 feels a little steeper than in the previous game, so you might want to get comfortable with that game first before moving on to the sequel. I don’t think it’s particularly cruel, but if you can’t get down the basics of using the pump button with precision timing, you’re going to hit a wall pretty quickly. You can skip that wall, of course, but I’m guessing people won’t want to skip their way through a whole game. 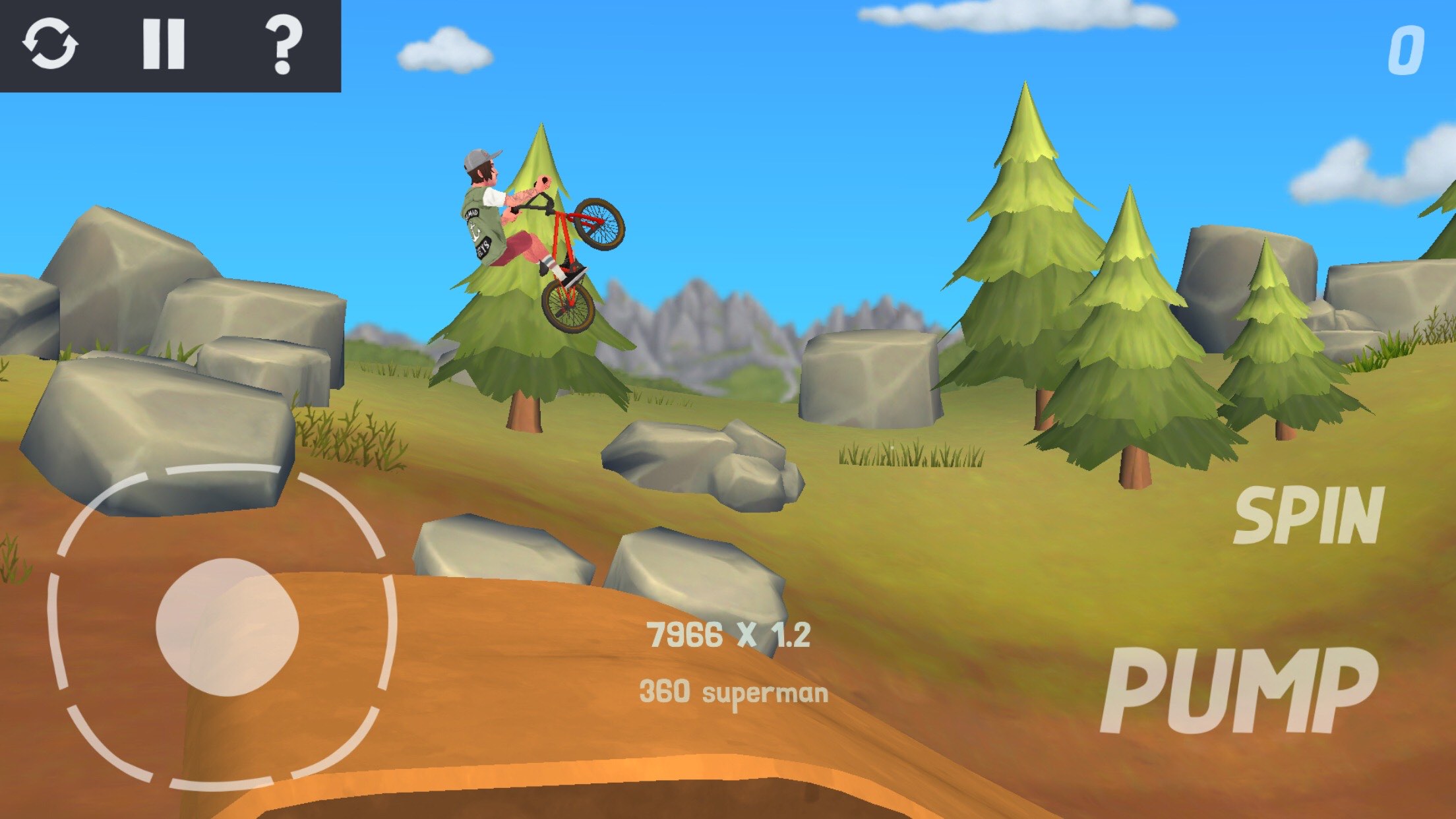 While there hasn’t been a dramatic step up in the game’s visuals the way we saw with the second game’s switch to 3D, Pumped BMX 3 does look better than the previous game. Animations are smoother and models are more detailed, for example. One area where the game could use some improvement is in the music department. You get one extremely repetitive tune that plays through just about the entire game. With real pros, well-constructed visuals, and smooth animations, the weak audio stands out like a sore thumb in what are otherwise quite strong production values. There is excellent Game Center support for both leaderboards and achievements, and iCloud support is also included.

Pumped BMX 3 is apparently the final game in the series, and that is perhaps for the best, at least for the time being. I’ll gladly take another game’s worth of content that shines as brightly as the second game, but I could easily see these games getting old if the developers decided to dig in and spin their wheels. Instead, we get to leave things off on a very good note, with a solidly-constructed game that requires some real skill and mastery to get the most from. While Pumped BMX 3 may not completely replace its predecessor, it certainly stands tall enough to be at its side, and that’s quite an achievement in and of itself.