The Pumped BMX series is one of my all-time favorite video game series, on mobile or anywhere. The original was sort of an unexpected success, and going back to it now more than 4 years after its release it kind of shows. It’s rough around the edges and its difficulty balance is maddening, but the underlying mechanics were fantastic. The second game in the series took things to a whole new level with 3D graphics, an expanded trick system, and a much smoother progression. This week, the third and final entry in the series arrived, Pumped BMX 3 ($2.99), and fittingly it’s like the ultimate culmination of the games that came before it. 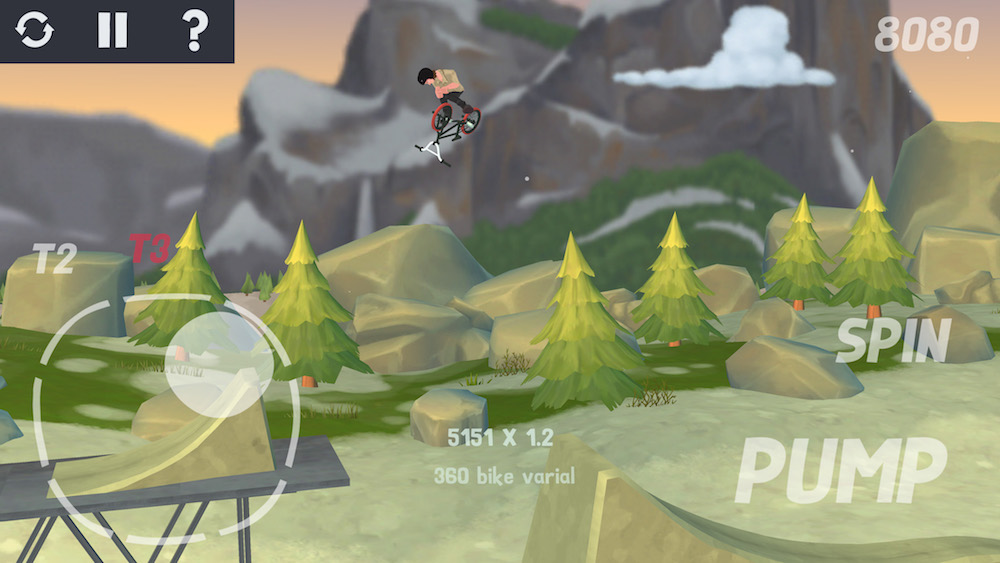 Just to cover the basics, Pumped BMX 3 is a side-scrolling bike-tricking game. Pump your bike to get some speed, release at the apex of a jump, catch some big air to pull off some sweet tricks, and (hopefully) land gracefully on the other side. It uses your device’s tilt capabilities for doing backflips, frontflips, grinds, and wheelies; a separate button exclusively for spinning horizontally; and a “trick stick" that performs a multitude of different moves by just pressing the different directions while in mid-air. I’m not going to lie, warming up to these mechanics takes a lot of practice, but eventually everything clicks and all of a sudden you have this magical, Tony Hawk’s Pro Skater-esque experience right in your hot little hands.

Besides the clever trick system, Pumped BMX 3 really nails the “feel" of riding and jumping. You’ll press the big Pump button to gain speed down hills and to thwomp yourself down early from a jump,

which can be essential when trying to continue your momentum after landing a jump. It’s a lot like riding the hills in Tiny Wings ($1.99) and just as satisfying to build up your speed and land in the downward slops of the landing jumps perfectly. Couple this together with the trick system, and you’ll be hard pressed to find a better feeling than when you nail a complex combo of tricks in the air all while spinning and twirling like a trapeze artist and then landing gracefully on two wheels on the other side. It really is a jolt of adrenaline and brings a constant smile to my face.

This is all mostly true for the entire Pumped BMX series, but as I said earlier, Pumped BMX 3 is the most refined experience yet. The graphics are improved while still maintaining a colorful “cartoonish" look, the trick system has been expanded even more over the last game, the rider models and animations are better, and the game somehow feels even faster and smoother than its predecessor. Also, Pumped BMX 3 features actual pro BMX riders as well as authentic BMX brands. Not in a gross #BRANDING way either, but in a way that adds authenticity to the game, which makes sense as the entire series has become a huge hit with the professional BMX scene.

I’m sad to see the Pumped BMX series come to an end, but happy to see how far it’s come in 4 years, and Pumped BMX 3 is the pinnacle of that growth. There are 60 levels to master and a whopping 700+ challenges and achievements to complete so, much like the first two games, this one will keep you busy for quite some time. If you’re new to the series this is easily the best of the bunch, but the older games still hold up incredibly well and feature tons of content if you’re looking for more. It really has been my pleasure playing and enjoying these games over the years, and in the face of a pretty strong week of new releases, I didn’t even hesitate to pick Pumped BMX 3 as our Game of the Week.