Once rare treats in an overall line-up that included a few other developers, EXE-Create’s games for Kemco have recently had to shoulder most of the load for the near-monthly release schedule of the publisher. Of this year’s seven iOS releases so far from Kemco, five have come from EXE-Create. Now, this developer knows how to put together solid RPGs in a short span of time, but that kind of breakneck schedule isn’t going to make anyone look good. Taking things one step further, this month’s selection, Asdivine Cross (Free), is a remake of one of the developer’s old feature phone releases. Many of the gameplay systems have been changed, which would be good if the “new" systems weren’t simply copy and pasted from their last few original games. In a vacuum, Asdivine Cross is a decent enough JRPG, even quite good in places. Unfortunately, we’re not in a vacuum. We’re in the world where this is the second Asdivine game I’ve reviewed in the last six months.

Well, let’s soldier on. First of all, this game’s story is almost entirely unrelated to any of the other Asdivine games so far. There are a couple of cheeky references to Asdivine Hearts, but for the most part, this game stands alone. Since it predates the other Asdivine games released in English by years, that makes sense, but I just wanted to make that clear. Our hero this time is a bandit with a heart of gold named Harvey, who gets pinched by the law while on a job. While he’s cooling his feet in prison, he meets a young girl who claims to be the princess of the realm. She’s been locked up for impersonating royalty, and the only member of the castle staff who can vouch for her appears to have taken a full dose of evil pills this morning. Harvey’s boss decides that they’re going to help her out. Princess Amelia is naive and sweet, while Harvey is cynical and savvy. You can probably fill in most of the dialogue between the two in your head right now. 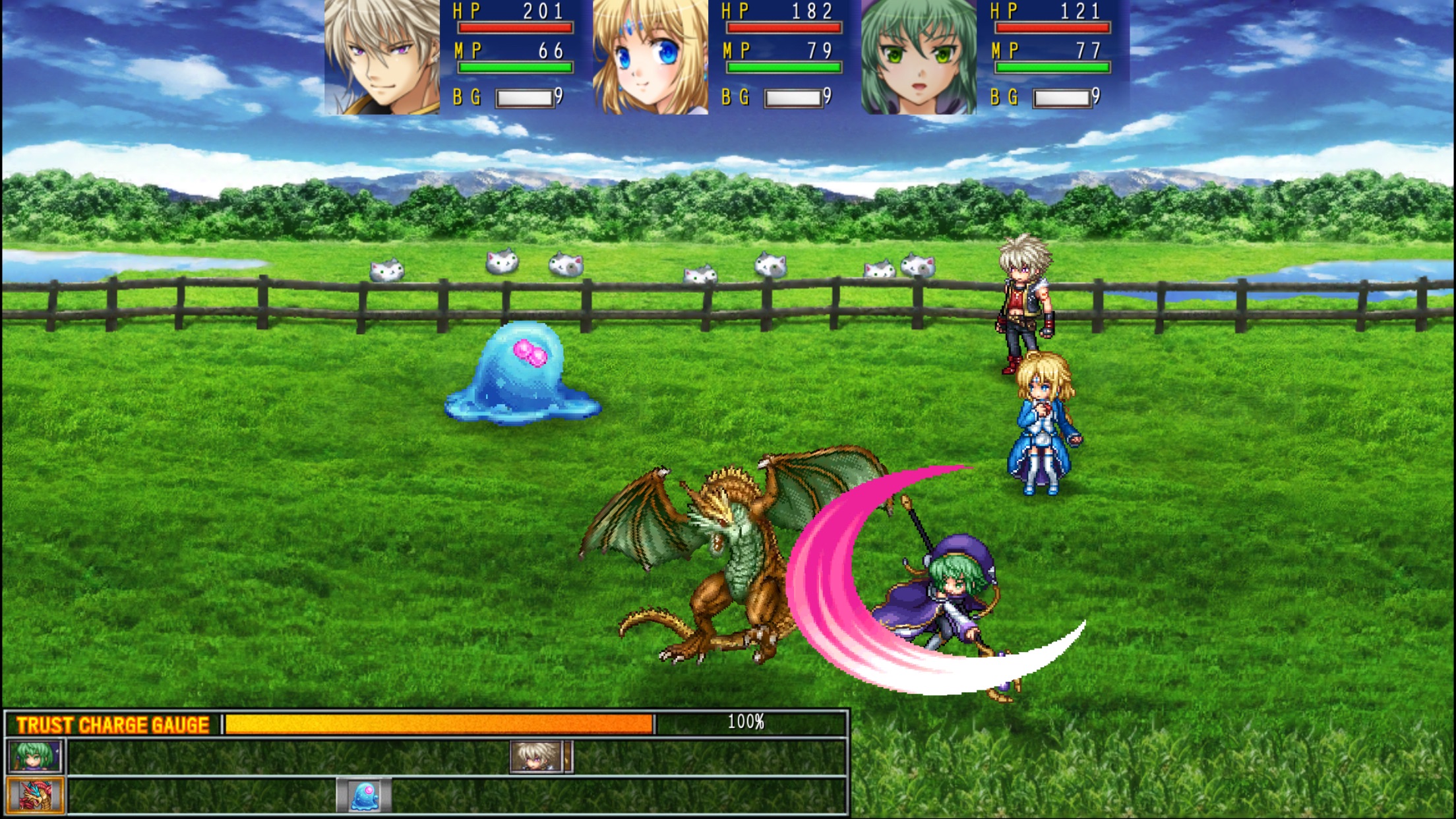 Within a couple of hours, you’ll have your party rounded out with another two characters. One of the two, Lucile, brings with her a Blue Magic-style system of learning moves that turns out to be one of the more enjoyable parts of the game. Apart from that, Asdivine Cross is typical of other recent EXE-Create releases. The battles are turn-based affairs with a sort of limit break proxy that you can pop every once in a while for extra damage. You can chain together combos for extra damage, and choose from a variety of special skills and magic. Outside of battle, the weapon crafting system that has been in the last several games from this developer returns, essentially unchanged. It brings the ticket system with it where you can draw random weapons in exchange for certain items dropped by enemies. Apart from gear, your input into each character’s development is quite minimal.

I guess what I’m saying is that you shouldn’t expect too much from the gameplay mechanics here. It’s all done competently, and as with other games in the Asdivine series, there’s a lot to dig into here if you’re inclined to spend extra time after the story’s finished. But as solid as it is, it’s also wholly unremarkable. The same can be said for the story itself. It’s fun and the localization is generally quite good, but we’ve been around the block more than once with EXE-Create and their Moonlighting-style “odd couple" romances. The plot is a slightly different generic plot from the last few games, but it adheres carefully enough to genre tropes that you will assuredly see every single turn and twist coming. Even the banter between characters, usually the high point of EXE-Create’s games, is a little too familiar overall. 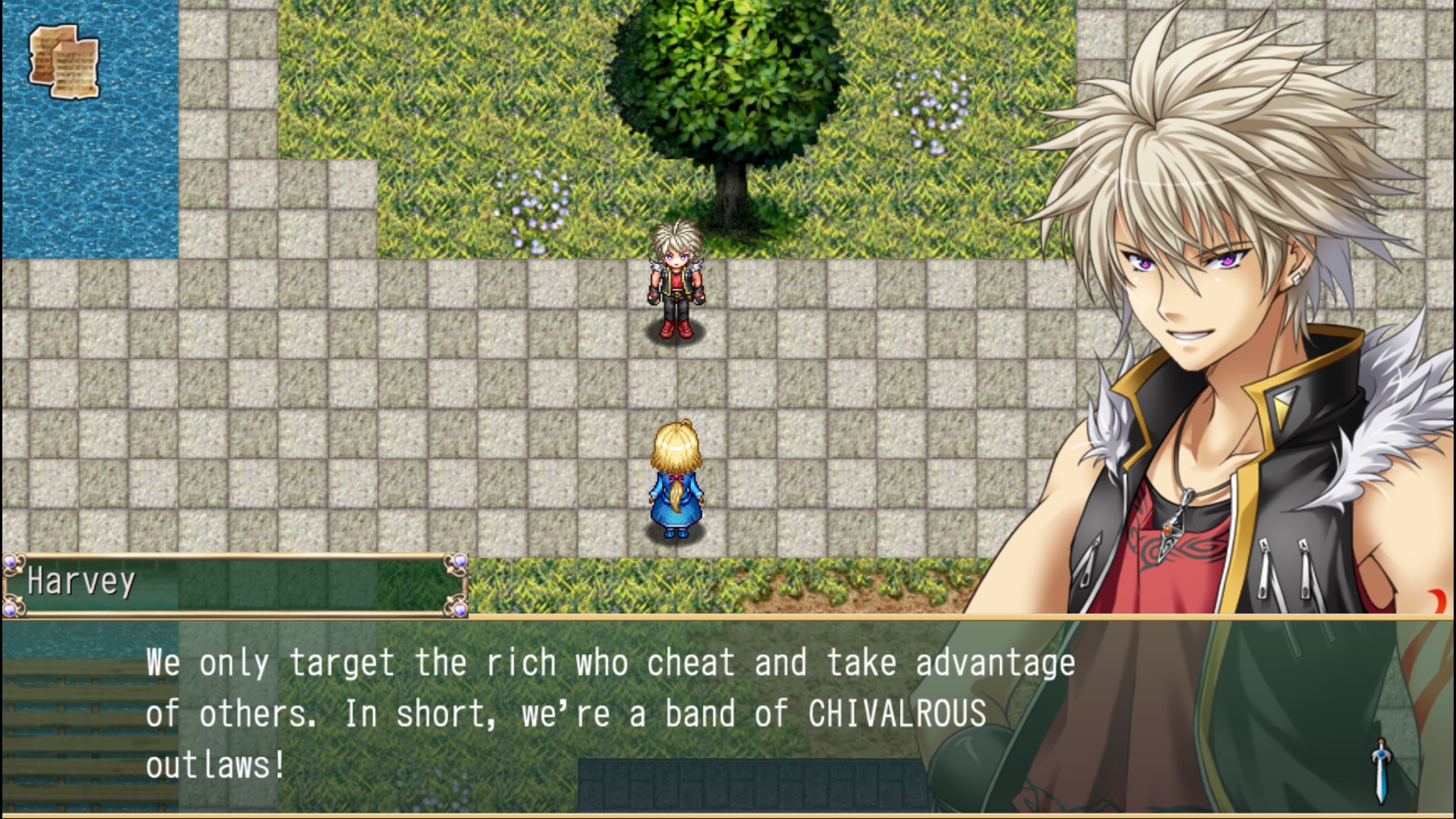 Asdivine Cross is available as two different apps. The premium version gives you a chunk of points at an effective discount and has ads disabled by default. The free version has ads, and if you want anything from the special premium shop, you’ll have to grind out all the points on your own for it. That shop contains the usual assortment of cheat items, none of which are required to beat the game. I’d go so far as to say that buying some of the doublers actually breaks the game, curbing much of the fun involved in battles. In any case, veteran RPG players will want to start on at least the hard difficulty setting if they want to encounter anything with any teeth at all. The lower difficulty settings are good for those who just want to enjoy the story, as you can more or less auto-battle your way through all but a few encounters.

It’s always hard to score games like Asdivine Cross. If you’re new to Kemco and EXE-Create’s games, you’ll probably really enjoy it. It’s a well-built JRPG, if not a terribly exciting one, and certainly doesn’t do anything poorly. The lively localization, familiar mechanics, and bright visuals help the game go down quite smoothly. On the other hand, if you’ve played any of the other EXE-Create/Kemco releases this year, don’t hope for this one to change things up much. That’s going to fine for some, particularly since decent traditional JRPGs are getting to be a rarity on iOS, but for those who have burnt out on the concept, Asdivine Cross doesn’t make many new arguments.