Fans of the classic Milton Bradley/Games Workshop role-playing board game HeroQuest who are looking for a similar experience on mobile have a few decent choices available to them. There are games that use the basic concept as a springboard for a larger, deeper adventure such as Heroes of Steel ($3.99) from the Trese Brothers. Rodeo Games has their version of the official Games Workshop follow-up Warhammer Quest ($2.99). If you happen to be searching for a more straightforward interpretation of the board game, however, the Arcane Quest series from Nex Games Studios is the way to go. The first game in the series, which released on Android and Windows Phones, was a pretty direct translation. Arcane Quest 2 (Free), the first in the series on iOS, built sensibly on that foundation, while Arcane Quest Adventures (Free) used many of the same gameplay mechanics but applied them to a different style of game.

The latest game in the series is Arcane Quest 3 (Free), which brings the series back to its HeroQuest-inspired roots. Just as the second game did, Arcane Quest 3 adds a few of its own ideas and fleshes out the solo experience more fully, to the point that the series is starting to develop its own identity apart from its source. Oh, you’re still doing all the things you would expect to be doing, like leading a small party in a turn-based exploration of dungeons, using special dice to battle enemies, and searching rooms for treasure. But Arcane Quest 3 feels less like a board game adaptation than it does a normal video game RPG. It’s a positive and probably necessary step forward for the franchise. 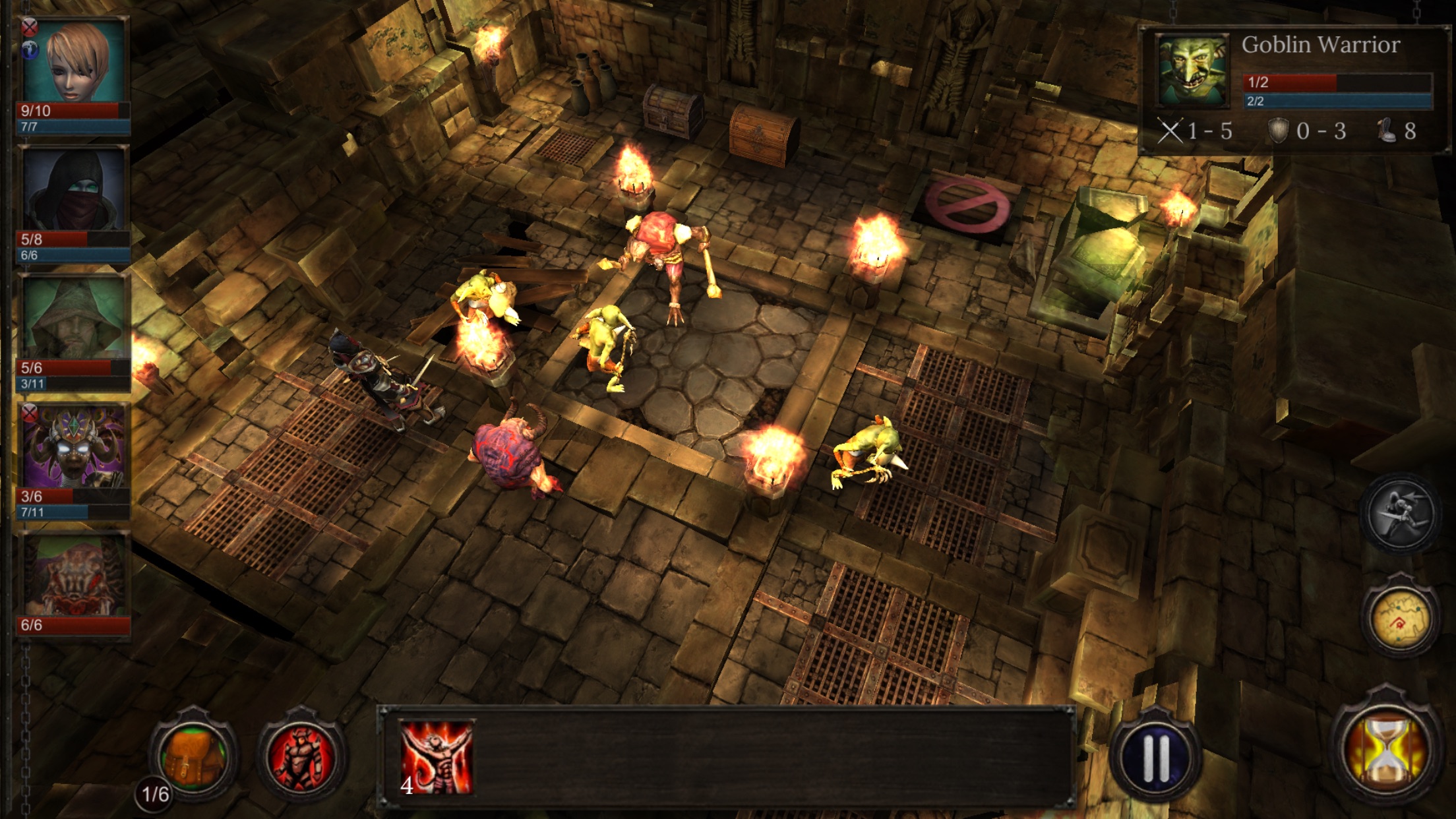 Framed for a murder, your once-respected guild has fallen on hard times. You’ve been banished to a new land, and if you have any hope of repairing your tattered reputation, you’re going to have to earn it back bit by hard-earned bit. You’ll do that by taking on mission after mission, trying to restore peace to the land and cull its significant monster problems. While there are some variations, most of these missions will have you going into a dungeon area, battling through monsters until you reach a boss, and possibly collecting some sort of key treasure. The dungeons vary in size, but even the smallest of the lot has several rooms to clear out. In addition to the enemies, you’ll also come across traps and treasures, so you’ll want to seach each room carefully in order to maximize your yield from each map.

Collecting experience earn you level ups that allow you to allocate some skill points. You’ll also learn new abilities that will help you fend off increasingly challenging monsters. While you’ll occasionally find items during your travels, most of your spoils will come in the form of gold that can be spent on equipment, upgrades, and other items between missions. The base game, which is free, allows you to play through the whole main story, but you’ll be limited to the barbarian, dwarf, wizard, and ranger as your party members. Other characters and side-quests are available via IAP, with a pack containing all of the game’s additional content going for a very reasonable $2.99. If you don’t buy any IAP, you’ll also have to contend with a video ad as you exit each dungeon. 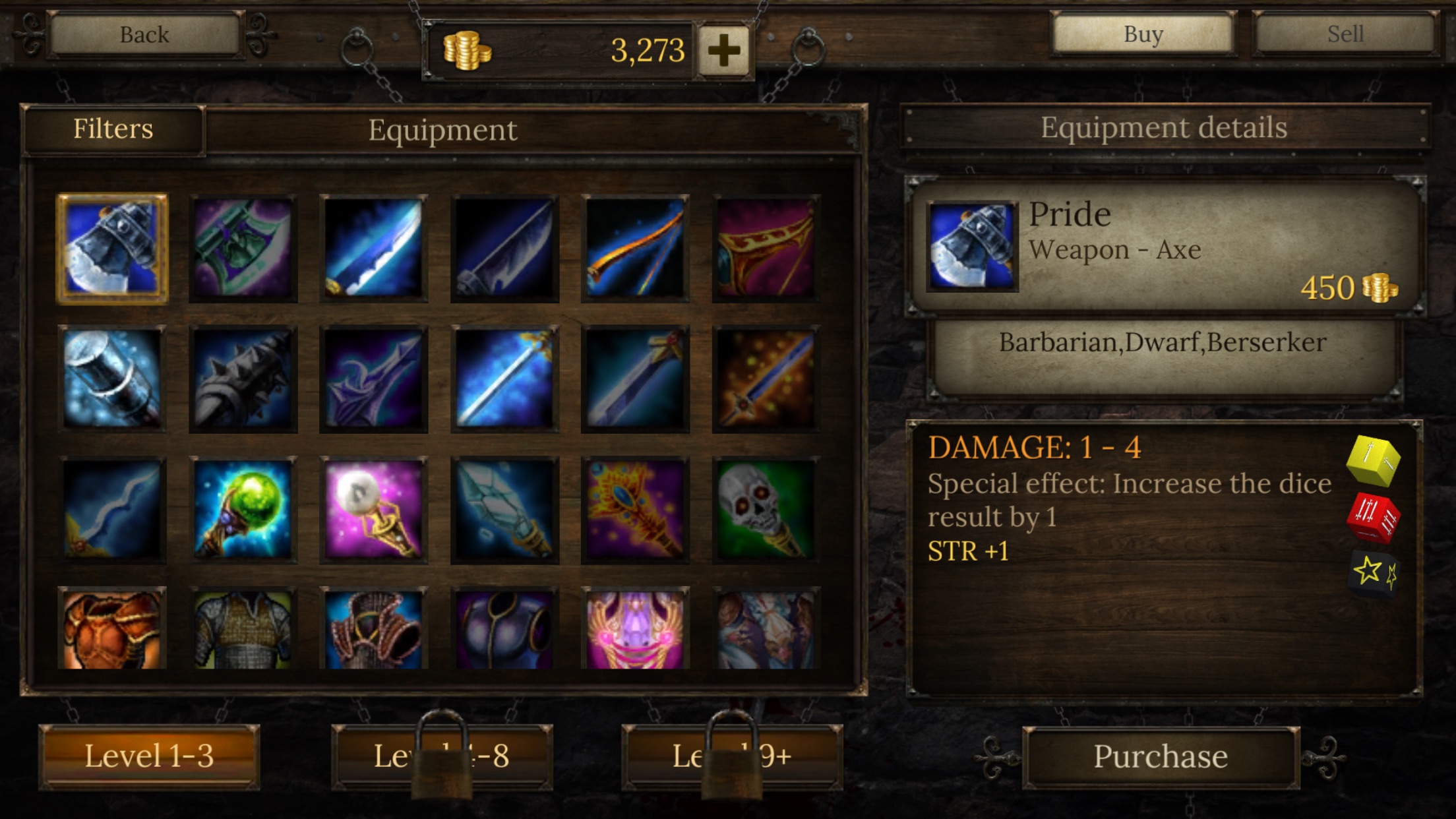 As is usually the case with this series, the gold balance is set at the point where it’s just right where it needs to be and not any more charitable than that. Of course, that means that if you spend it foolishly, it’s easy to end up with less than you need to keep up with the latest gear. If you find yourself strapped, you can spend some time repeating sub-quests, or you can buy gold via IAP. Arcane Quest 3 is a pretty challenging game on the whole, but while buying gold will certainly make things easier for you, it feels like the game’s difficulty curve was designed to match the player who is earning their gold in-game.

One of the benefits of escaping the boundaries of the board game genre is that dungeons can use a variety of backdrops and layouts. Arcane Quest 3 doesn’t offer a ton of different locales, but it has enough that it doesn’t have to fall back on text to separate a dungeon from a cave. In general, the graphics have received a huge bump. Previous games used fairly simple 2D assets which worked fine if you considered the whole thing as a digital board game, but Arcane Quest 3 makes the hop to full 3D polygonal graphics and animated characters. The audio side hasn’t seen quite the same strides, but it’s passable enough. My biggest knocks on the presentation of the game are mostly connected with how generic it looks. The dungeons are especially plain. I suspect the developer had limited assets to work with, however, so I’m not going to get too upset about it. 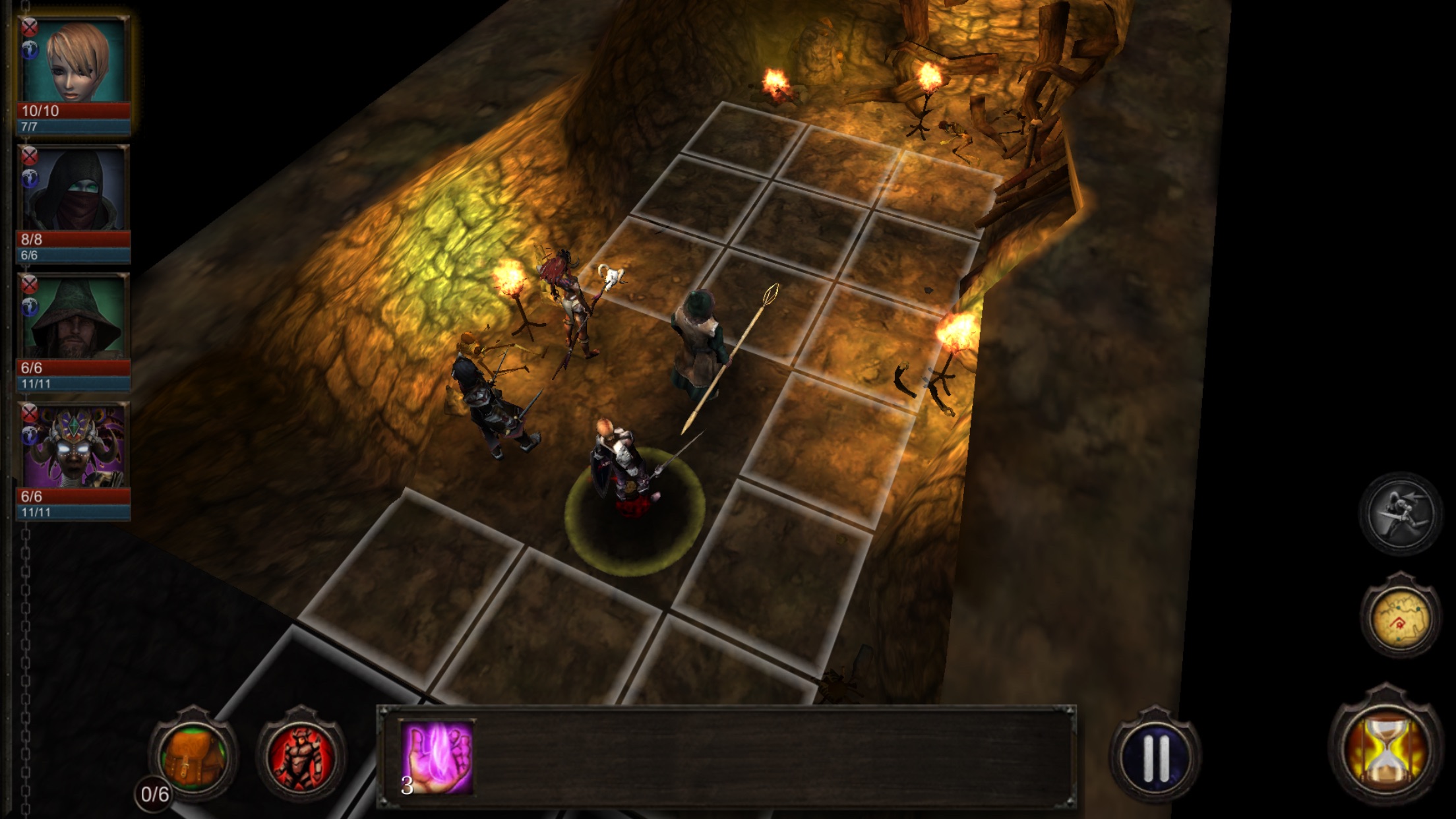 You’ll definitely want to pop into the options menu before you really get going. Interactive objects don’t stand out very well until you activate the feature in the options menu to highlight them. The default movement speed is also painfully slow, but there are two faster options in the menu that alleviate this issue greatly. The developer even included some graphical settings to play around with so that even players on older hardware can join in on the fun. The game includes two difficulty modes, and the hard mode certainly lives up to its name.

There are a couple of other exciting features in the game, but neither of them has really reached their full potential yet. First is that you can play multiplayer, cross-platform no less, but only in specific missions designated for the mode. Still, it’s a start. The second interesting feature is a Quest Edit mode. This is only available on the PC version, but once a level is created and uploaded, you can get access to it on your mobile device. It doesn’t seem like a lot of people have used this editor yet, but it could potentially be a major feature if it picks up in popularity. Arcane Quest 3 also includes Game Center support for achievements. 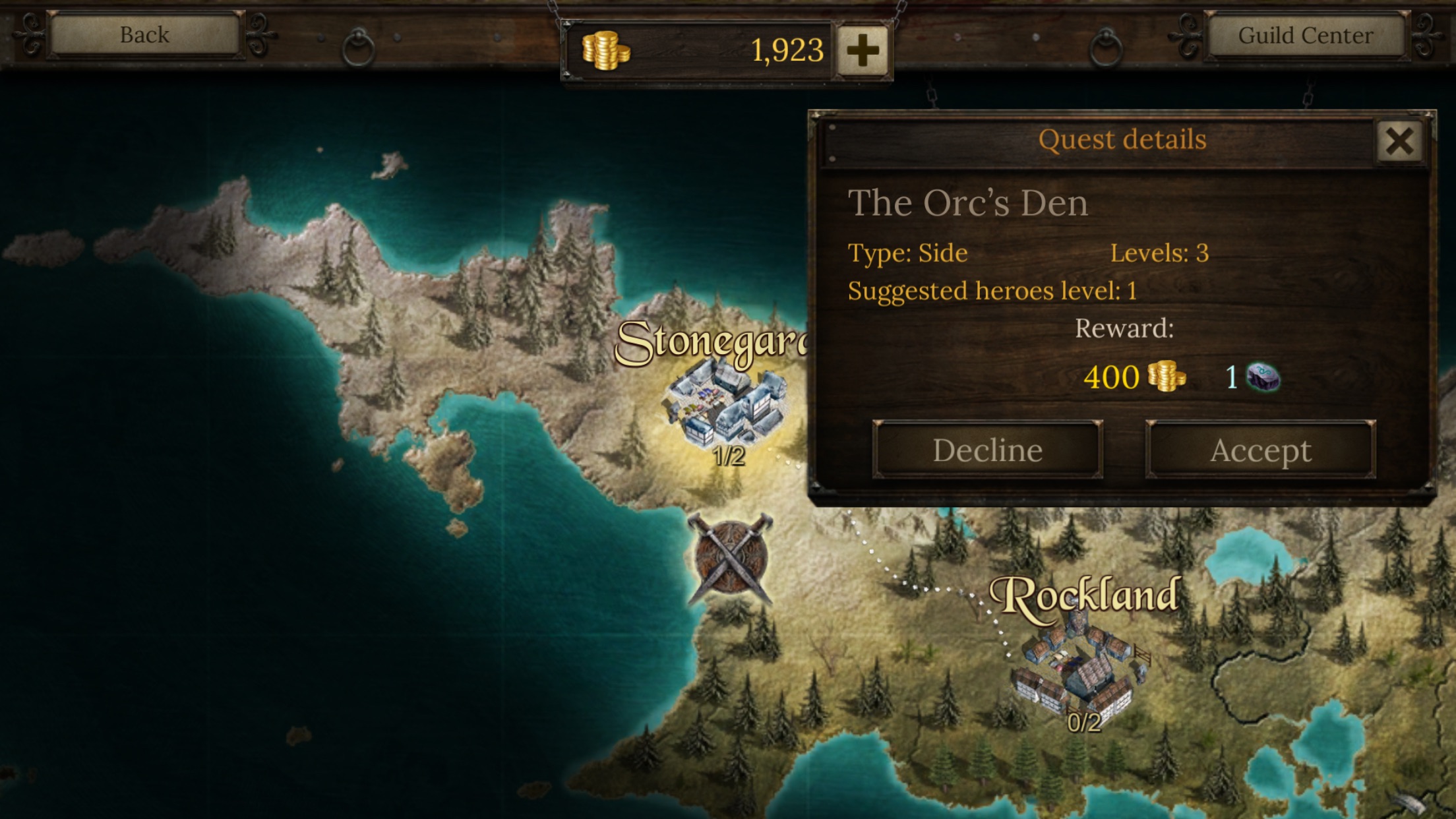 Even with all of the additions and the somewhat high level of difficulty towards the end, Arcane Quest 3 is a really accessible take on this genre. That’s likely owed to having its feet planted in the mechanics of a board game designed for the masses, but however it comes by it, the ease of learning Arcane Quest‘s fundamental rules make it an attractive choice for those who are searching for a strategy RPG to play but are put off by the somewhat opaque gameplay found in many other examples of the genre. Hardcore strategy players will want to head to the higher difficulty setting right away, but even then, they might not be satisfied with the level of depth on display here. That said, we’ve got plenty of hardcore strategy RPGs on iOS, and quite a few simplified ones, too. A game like Arcane Quest 3 that scratches the itch for something more substantial while also being approachable is a rarer treat.

Since Arcane Quest 3 is free, it’s simple enough to see how well it fits your tastes. The first couple of missions past the tutorial should give you a good idea of what to expect from the rest of the game. I personally think it’s a rather excellent off-shoot of HeroQuest that lays down a foundation for even greater advancement in the future. The dungeon layouts and character builds show a lot of consideration beyond simply adhering to what HeroQuest did before, and I really liked how the story glued everything together. I’m not sure I could have asked for anything more out of a sequel to Arcane Quest 2, but I’m sure Nex Games Studios will find a way to prove me wrong with whatever they’re cooking for the next game in the series.