Orangepixel’s previous game, Space Grunts ($1.99) was basically a fast-paced, roguelike-inspired, action game that just so happened to be turn-based. Heroes of Loot 2 ($3.99) instead is that fast-action game that Space Grunts coult have been in an alternate universe. This Gauntlet-esque dungeon shooter eschews the item system for some new tricks, such as a two-character swapping system. And there is the expected intense challenge to be had, with dozens of dungeon floors to try and traverse before beating the game. Good luck getting anywhere near that without a lot of skillful play. Yet, despite everything on paper that seems enjoyable, there’s something about the loose feel of Heroes of Loot 2, with some questionable design decisions along the way, that leave me not entirely enamored with this game. 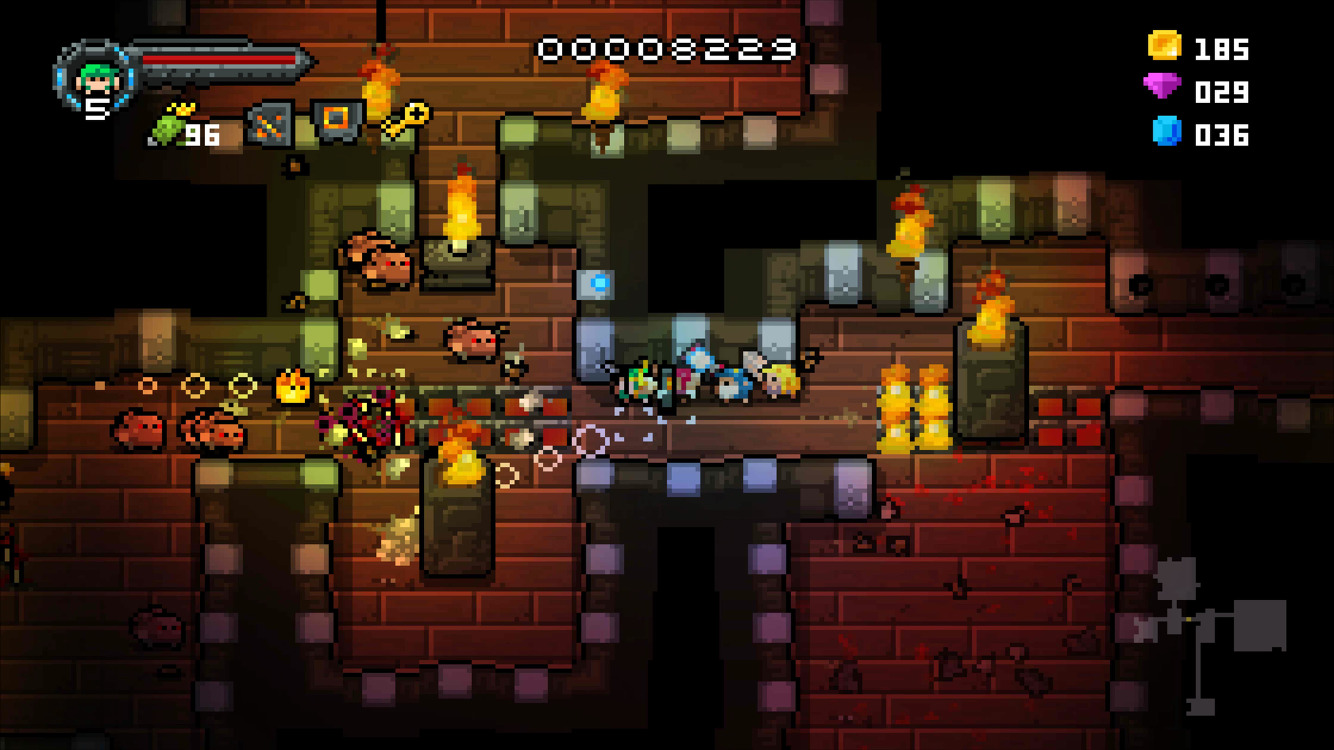 The two-character system is fun to play with, because you get the best of both worlds. You get the weaker ranged combat character to deploy, and a powerful melee character. Sometimes you need to clear everything out quickly and take a few hits in the process, and that’s what your melee character is for. But most of the time, I find myself using the ranged character, preferring the elf for the speed combined with ranged ability, though the wizard is sure to have his fans as well. The valkyrie is far preferable to me of the two default melee characters that you’ll be spending most of your time with before you work toward unlocking other characters, in part because of the added speed, and because the valkyrie can find hidden walls. Granted, if you look at the minimap closely – easiest on iPad, I suppose – you can see these secret walls. They’re ‘secret’ in that if you aren’t looking for them, you might not find them, but they’re not really all that well hidden. And really, the secrets are only worth finding if you’re willing to take the risk by jumping far ahead in the game, where getting experience early on might help the clumsier of us out with staying alive.

While I admit to being the kind of player who’s very death-prone, there is a lot of sloppiness here. There’s too many opportunities for your health to be suddenly ransacked by bombs, or getting too close to an enemy that has a DPS of $Texas, or perhaps some flames or spikes that will pop up from the floor at random moments? Or consider the random shops that might just have one item, or the people selling things with currency that you could have no possible way of affording yet. There’s just so many weird and questionable design decisions here that just give the game this weird, excessively-loose feeling. 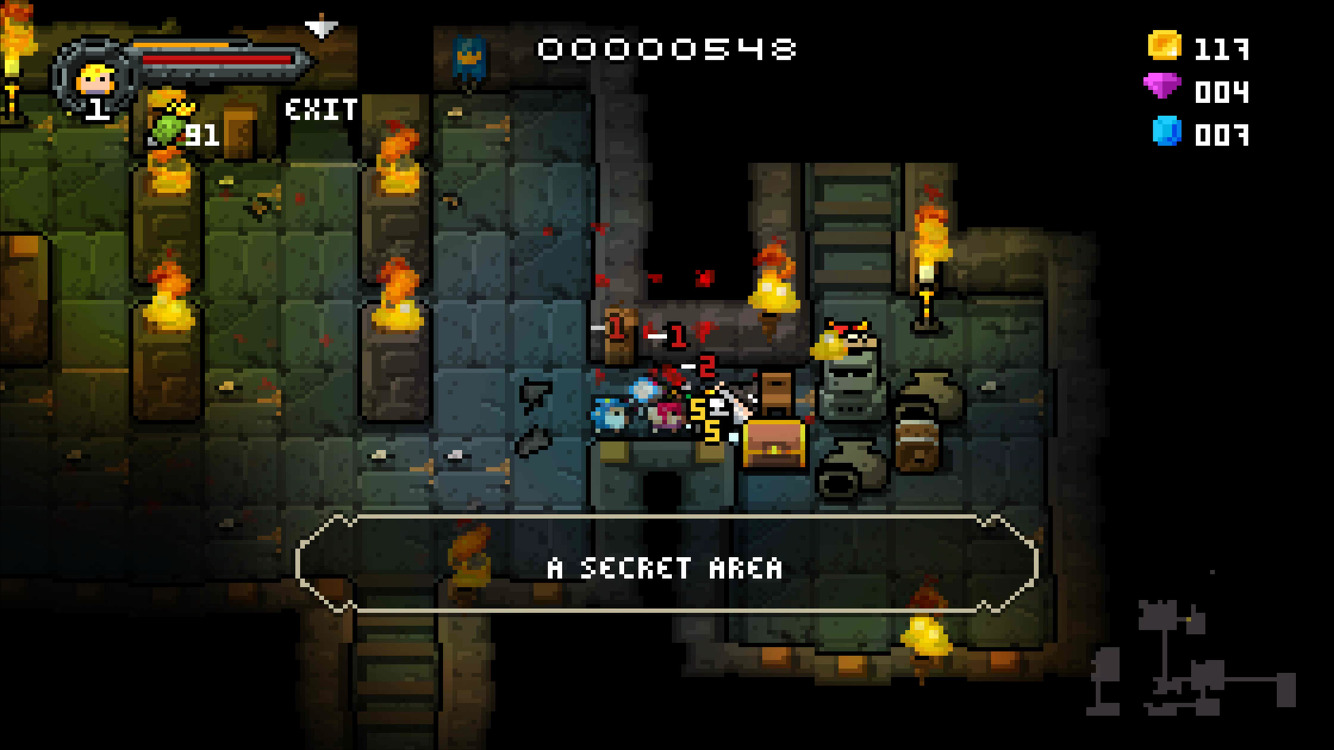 And honestly, part of that is Orangepixel’s style, there’s always a loose grip on sensibility, sure. But something about it seems a bit more grating in this game, where it feels like some extra time and work on the feel of the game would go a long way. Like, the random arena missions that pop up and lock you into one character without warning are annoying. Even the variety of the game is lacking – find the key, or go defeat this boss-type missions get a bit a bit grating after a while. I want some more variety, some more genuine surprise, versus familiar map layouts and objectives.

Visually, Heroes of Loot 2 continues with the lighting effects that helped give Space Grunts its stylish look to go along with the typical Orangepixel artwork. The game is a bit dark, so do muck with the brightness settings, or it might be difficult to see enemies. Interestingly, items like torches and flaming enemies affect the lighting in the game, a cool effect for sure. This is a good-looking pixel art game, but the overly-dark graphics are a drawback, albeit a fixable one. 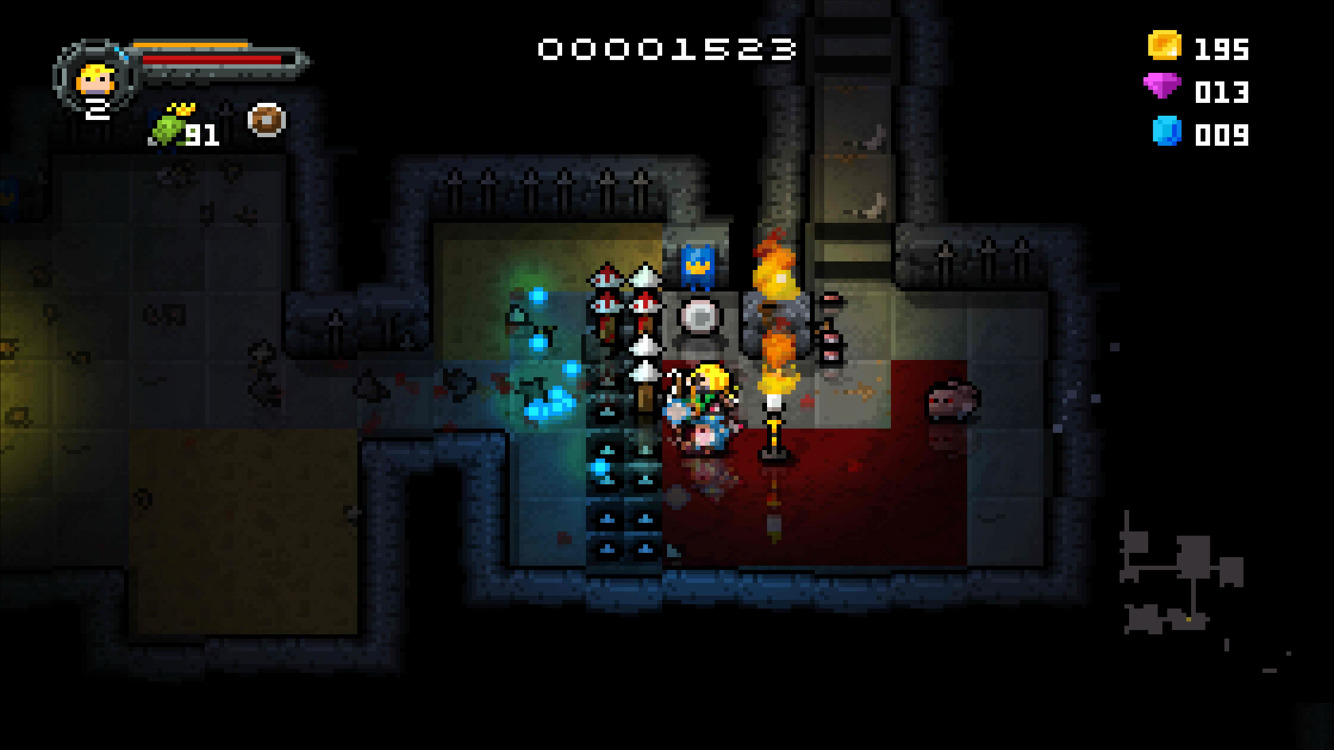 Controls-wise, you have a virtual joystick that’s a bit fussy to deal with but not overly problematic. Two buttons, one for swapping characters and the other to fire, have some responsiveness issues. It feels like sometimes characters won’t swap or actions won’t be triggered unless the button press is repeated, or there just isn’t a good satisfactory feel to their usage. Still, the controls are decent. The game uses auto-aiming instead of dual-stick aiming like in the PC version of the game, and while there’s some questionable automatic aiming, it’s still fine. MFi controls are here, with X being used to fire weapons, and Y being used to switch characters despite the software buttons showing A and X respectively. The 1.1.1 update might have some bugs to work out, as the firing joystick is inverted too. That, or Orangepixel is really committed to the idea of inverted firing joysticks in games. Too far!

Part of the problem with the long-term appeal of Heroes of Loot 2 is that the game takes a long time to give you any of its long-term rewards. Unlocking heroes or seeing the benefits of leveling up is very tedious. Starting off with only the two pairs of heroes means that there’s not a lot of variety, which could be addressed by bringing in the additional heroes earlier on. The leveling up could be designed to not only explain what the benefits are early on, but to possibly scale up your leveling and benefits for doing so early on. Otherwise, it’s just a game that has you trying to survive for as long as possible. And for some people that’s okay, that’s compelling enough. But to have a permanent rewards system teased, and then to make unlocking them feel so indeterminably far off to actually obtain is annoying.

If I had to describe my thoughts on Heroes of Loot 2 as succinctly as possible, it’d be that the game is fine. It has flaws and shortcomings, but nothing overly killer. And I like seeing more entries in the fast-paced roguelite genre hitting mobile. Space Grunts scratched that itch well enough for me with its clever speedy turn-based action. As a fast-paced real-time action game, Heroes of Loot 2 does enough well that I enjoy my time with it, but I didn’t find it as compelling as I hoped it would be.