As video games increase in complexity, and as there is a unilateral push from both software and hardware developers for graphical prowess, there is a certain charm from games that choose to reminisce on days gone by. Whether it’s titles such as Downwell ($0.99) which have the difficult yet extremely rewarding arcade style action that has been lost over the years, or classics such as 1-Bit Ninja ($2.99) that throwback directly to the 2D side scrolling platformer days of the Mario series, the most successful retro titles on any device are the ones that utilise their source material perfectly while either refining it to perfection or adding unique, modern twists on the formula. However, the schematics for ‘retro’ games in the current gaming environment run a fine line that is more than just surface deep – if it’s too complex, you simply have a modern title under a wrapper of pixel art graphics. On the other hand, if the game is too simple it may just serve as a reminder to why we no longer spend our time squinting at monochrome screens without a backlight. 2-bit Cowboy Rides Again ($1.99) unfortunately is a prime example of the latter – some good level design and interesting ideas are let down by forced artificial difficulty, and ultimately the retro nucleus of the title ends up holding the game back rather than letting it run free. 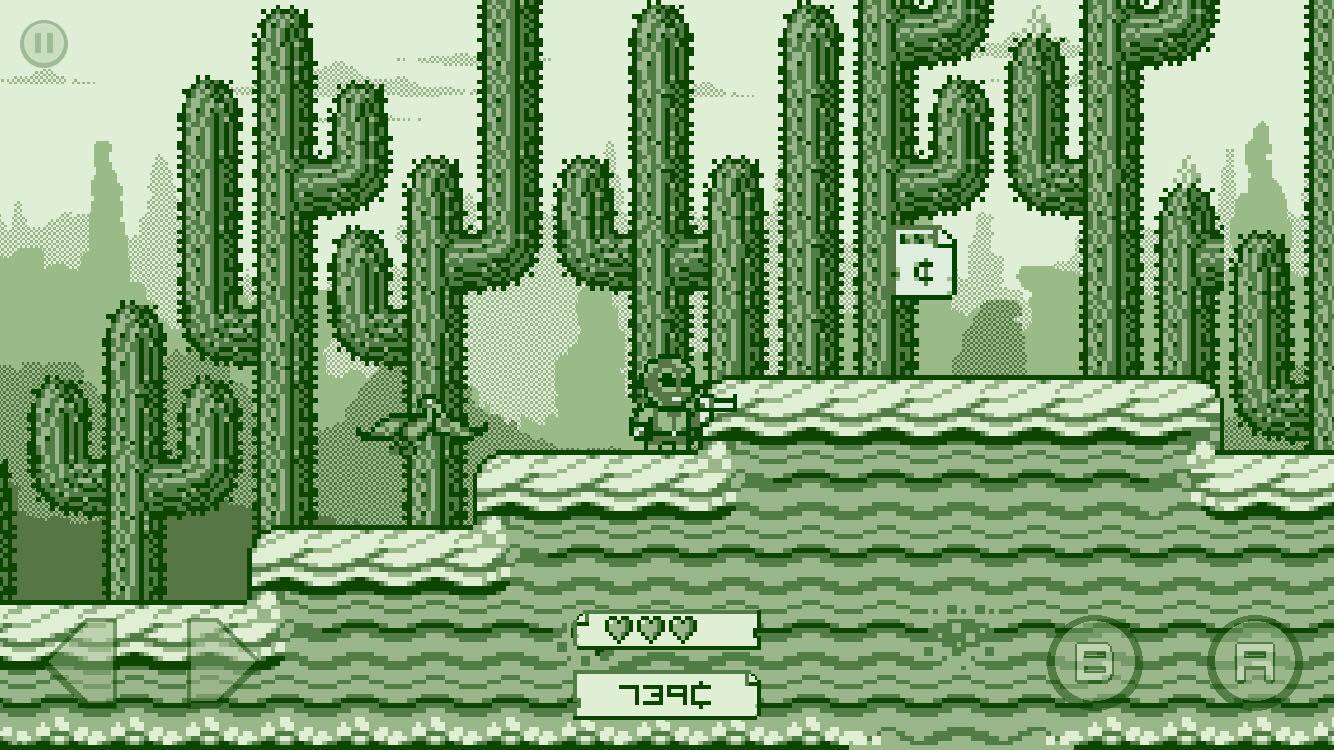 Anyone familiar with the original 2-bit Cowboy ($0.99) by publisher Crescent Moon Games and developer Cascadia Games (who have now titled their mobile division ‘Retro Phone Games’) will know exactly what to expect from the sequel. You play as the eponymous law enforcer, whose task is to get to the finish of each level under the pretence of saving the land from the gang of miscreants who you jailed in the first game and have subsequently escaped. Echoing the core gameplay of the Mario and Mega Man series of old, the cowboy must jump over gaping crevices while avoiding or shooting enemies that get in your way, and who, upon death, release some coins that go towards a cumulative total. There are also certain quests that you can receive within a level that vary from killing a certain amount of a type of enemy in that run, destroying all of the barrels or crates Crash Bandicoot-style or collecting sheep, ducks and other helpless creatures that are on the loose in the desert. These challenges reward you with more money for your bank, which can then be spent on customisable cosmetic accessories such as masks, hats or even belts. While not particularly varied, these pursuits will push you to every nook and cranny of the environments you explore, and make the most of the twelve large and vast landscapes the game offers. 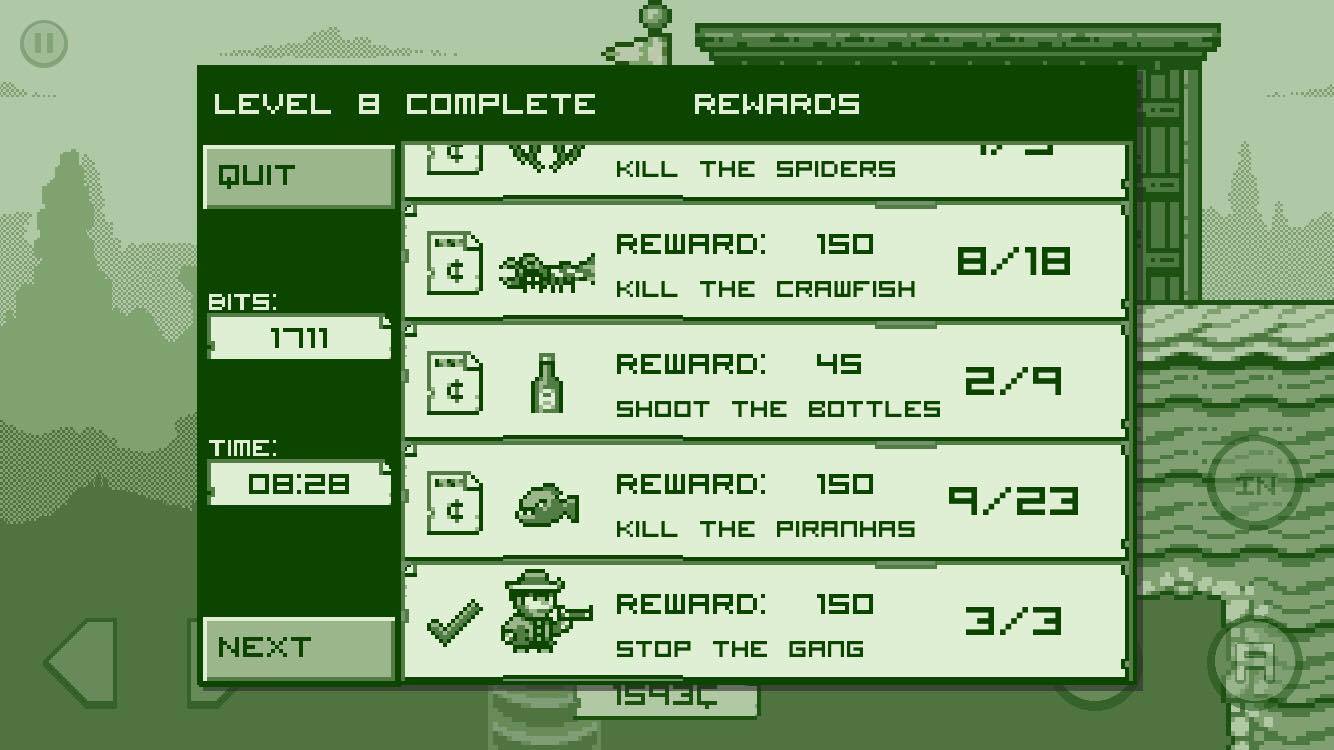 Even without these bonus hunt – which are entirely optional – the platforming action of the game is surprisingly varied and interesting, with some cleverly devised level design that prevents the monotony of jumping and shooting and attempts to refine the core principles the foundation of the game is based off. There are a varied array of environments, from caverns to lakes and even cliffs you are tasked to scale. The impressive use of verticality in the latter level was very enjoyable to undertake, and the ability to scale walls meant there was a degree of sequence-breaking that allowed you to skip large sections of platforming and even find some hidden caverns that rewarded you with more coins or potentially recovery items. Furthermore, with tight swimming controls (which are normally the bane of any platforming title, whether 2D or 3D), the underwater catacombs proved quite fun to swim around and find hidden easter eggs such as a sunken China ship, and in this case exploration truly was rewarded.

While these positives mean that any fans of the previous game in the series or anyone itching for a retro platforming fix may find the title essential, there are some flaws that made the experience exasperating rather than enjoyable for a large part of 2-bit Cowboy Rides Again. When the level design works it’s a delight, however when it doesn’t it becomes more than infuriating. For example, in a relatively early level you gain the ability to ride on horses (and later bulls), which is a nice way to change the tempo of the game. However, the horse gallops on a timer, and when the timer expires the horse vanishes into thin air. Normally this would be fine, but the reliance on the horse to undertake jumps that are vital for progress meant either significant backtracking to the stable if you were too busy collecting coins or defeating enemies to make the jump, or even worse being stranded on an island where you could not get back to a horse or even move on and so were forced to die and start the level again. The lack of checkpoints – implemented to try and recreate the difficulty found on older games – is a good idea in practice, although the aforementioned design oversights coupled with controls that are not entirely accurate and could end up not responding at the very end of a pivotal jump mean this difficulty is purely artificial and only adds further frustration to the title. 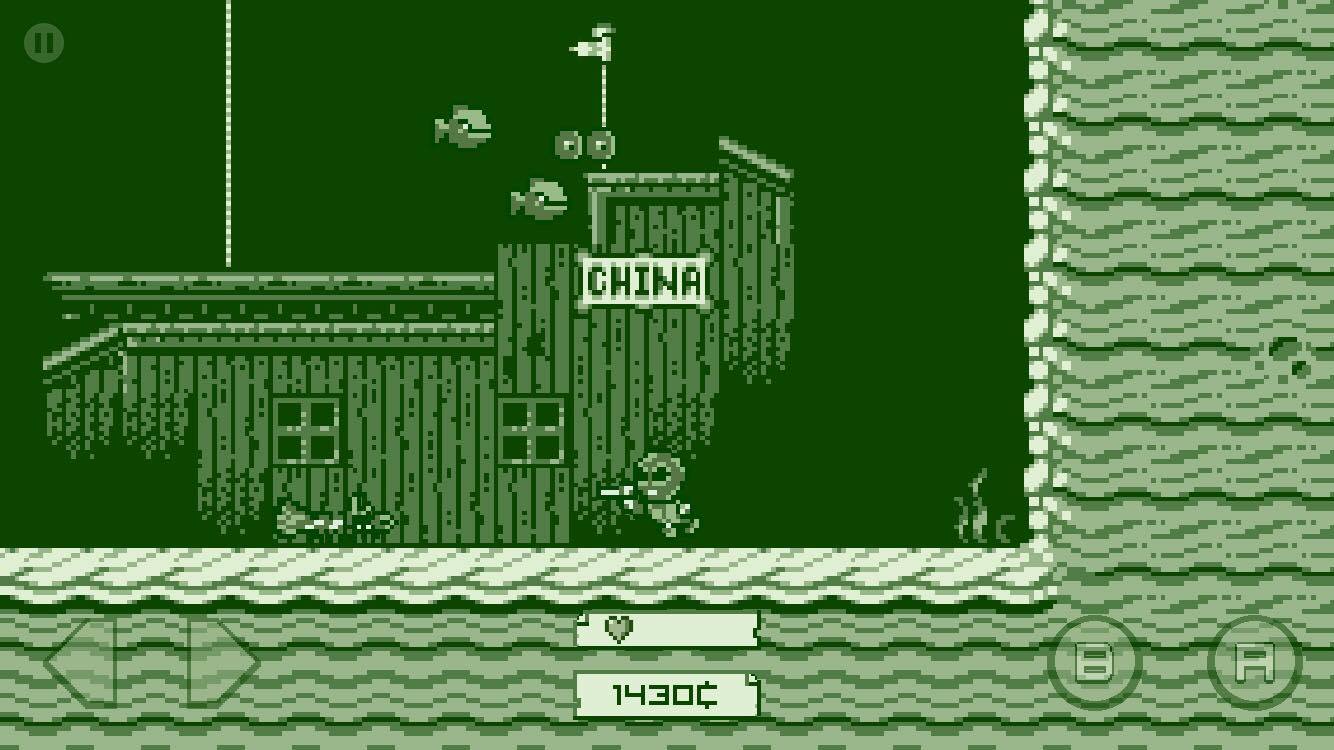 The Game Boy-esque all green graphics also prove to be a double edged sword for the game. Notwithstanding the fact that they are rather jarring (there’s a reason for the relative scarcity of monochrome retro games), they also end up blurring everything together and making it rather difficult to know where you’ve explored and where you haven’t, especially as most of the levels simply aren’t left to right and get particularly complex. There are some choices that aren’t simply the fault of the aesthetic, however. Certain crates contain explosives that will kill you instantly, and send you straight back to the beginning of a level. If there was any indicator which crates these were – such as a TNT graphic or anything like that – it would be fine, however they look identical to the ones which would give you coins or health. Of course, there’s the argument that you should simply be more cautious near crates, although it just led to me choosing to avoid them completely and not bothering with any of the crate-destroying quests. When you’re instantly blown up and killed on the tutorial level with no explanation or warning, it’s not a fantastic first impression. 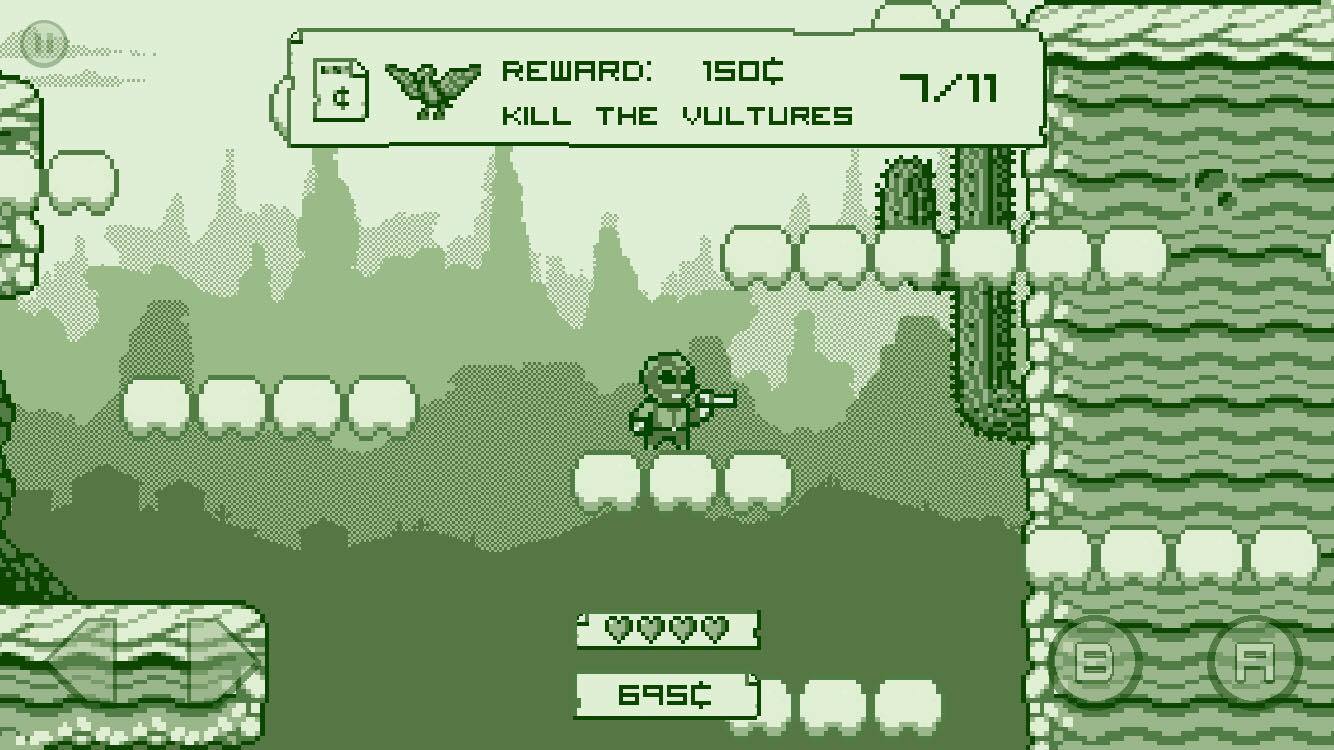 My biggest issue with 2-bit Cowboy Rides Again isn’t any of these issues independently, but how, as a collective whole, they were all present in the previous game. The two are virtually identical, and essentially every positive and negative we reached in our previous review is still present, and in the latter case only amplifying the waning patience one can have with this series. The most irksome, lethargic and borderline offensive problem this game has is the music. For the vast majority of the game the soundtrack is identical, and even then is only a loop of a generic Western sample that is only a couple of minutes long. Considering the game is a few hours in length, hearing it over and over again is maddening and seems completely out of place with the era the game attempts to hark from. Worst of all, this is present in the first game and is actually the exact same music. Every criticism I have with this game also applies to the first, and I can’t help but feel the developers have been lazy with this release – making the same mistakes twice is somewhat forgivable, however essentially clicking copy and paste for all of them is not and, in my opinion, show a lack of respect to the fans that the series and the creators have gained over the years. 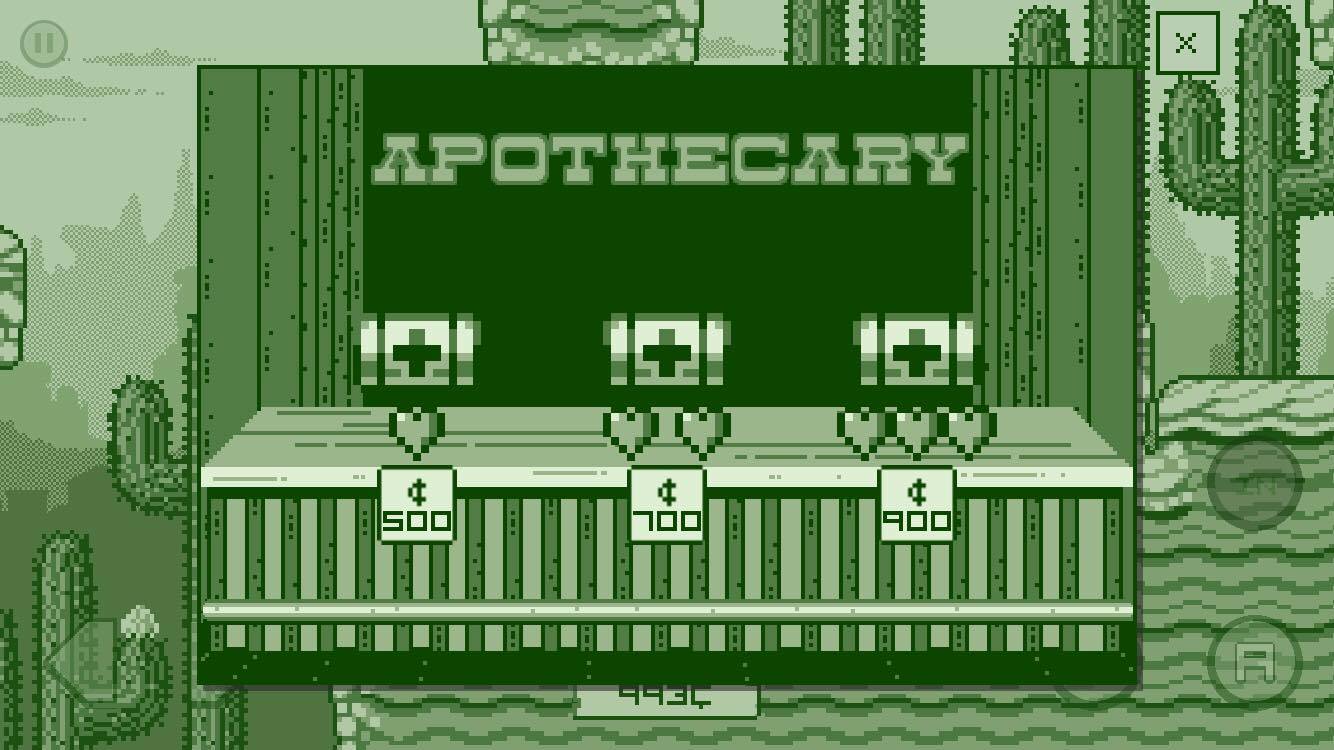 That being said, the things I liked about the game coupled with the nature of the criticisms laid out means I have great expectations for what Retro Phone Games can show us next, as it would not take much to turn 2-bit Cowboy Rides Again from a rather run of the mill retro platformer into a truly essential title. While the quests the game provides have very little incentive to pursue barring minor cosmetic purchases, if these are changed to upgrades such as different weapons and abilities in the vein of the Metroid series there would be more scope for exploration of the impressive levels the game contains. Following this Metroidvania theme, adding a map and even making all the levels into one large desert to explore would be fantastic, and coupled with some design fixes could make the series truly stand out. Therefore, based on the forum reception for the game, it’s likely fans of 2-bit Cowboy and retro gaming aficionados do not need my recommendation and will probably be enjoying the sequel already. For anyone else, whether you’ll find 2-bit Cowboy Rides Again to be an essential title is down to your own interests and most importantly the degree of patience you’ll be willing to afford it. Nonetheless, it will be very interesting to see what Retro Phone Games do next and whether it’ll be a bullseye or if it will just keep beating a dead horse.