The App Store gods have been kind to my weird self this year, first with the gloriously twisted adventure tale of I Have No Mouth And I Must Scream, and now with another point and click adventure that is just wrapped in brutal art within a bleak world and some moral quandaries that leave you thinking.Tormentum – Dark Sorrow ($4.99) is an absolutely gorgeous powerhouse of an adventure game, and it is objectively incredible in many ways, even if it doesn’t appeal to your subjective tastes as hard as it does to mine. 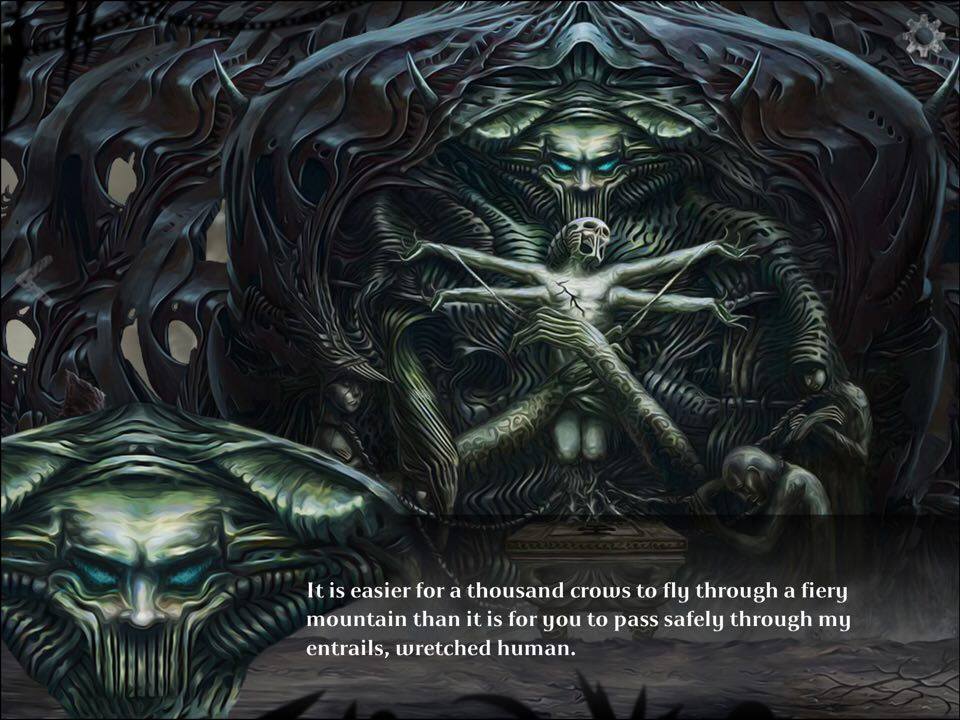 Developed by OhNoo Studios (Love the name), this game has had quite the adventure of its own. It was crowdfunded on IndeiGoGo, approved on Steam Greenlight, released, and finally ported to iOS and Android a year later. As a fun side note, some of the IndieGoGo rewards included finding your name on a gravestone in the world, or finding your corpse, re-imagined by the artists based on a photo that you provided. I like the way these developers think. In the game, you play a cloaked and hooded fella with amnesia (of course) who wakes up in a cage hanging from an airship next to an anthropomorphic rat who tells you that you’re being taken to a castle to be punished for your evil deeds. But he is totally innocent. He’s here by mistake. Honest. You can totally trust this guy. I’m sure. 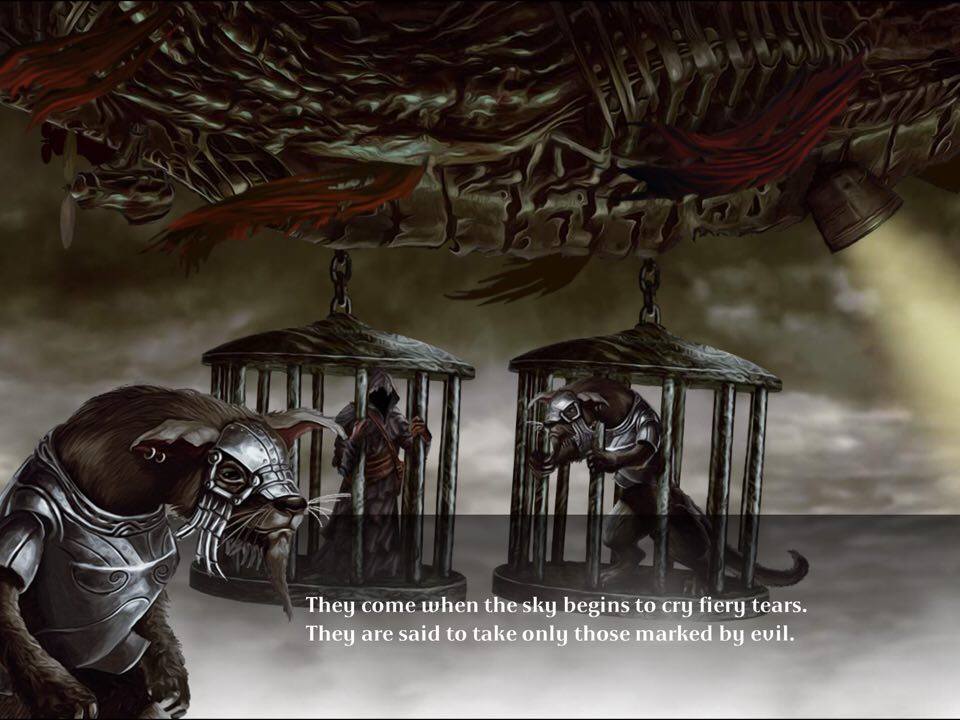 What follows is a deceptively simple game that seems far deeper than it is. But it pulls you into this world with the incredible artwork of the main illustrator Piotr Ruszkowski, and it just doesn’t let you go. The big buzz of this game back when it was first crowdfunded was its inspiration, which the game wears proudly on its sleeve. The art style is heavily influenced by H.R. Giger, who you may recognize as the visionary designer of the Alien franchise, with art that fuses man and machine in painful and sometimes sexually suggestive looking ways, as well as polish (represent!) artist Zdzisław Beksiński, who I was unfamiliar with by name (my ancestral language is one of madness. Just look at all those Zs in his first name) but I’ve definitely seen his work before, which is equally brutal and metal. Google image search both artists at your own peril, but you’ll probably see some NSFW stuff. Tormentum’s art is so detailed, with such strong shadows, and the game uses parallax scrolling so well at times, you’d almost think the game is 3D on occasion.

Here are the most common criticisms I find in my adventure games. They usually have too many nonsense puzzles, they’re usually paced a bit too slowly, and they usually have some weird bugs. You almost always get two out of these three. So imagine my surprise when I found none in Tormentum. For reals. There were reports of bugs at launch but they appear to all be fixed, and I tried the game on my iPhone 5S and my iPad Air 2. OhNoo is a very active developer, which is great. But the puzzles are pretty much all very straightforward, and each area of the game only takes an hour and change or so to progress from. I was only very briefly stuck three times, but it was because I didn’t notice a clue or item to examine, and they all seemed obvious in hindsight. Definitely slapped my forehead a couple times. 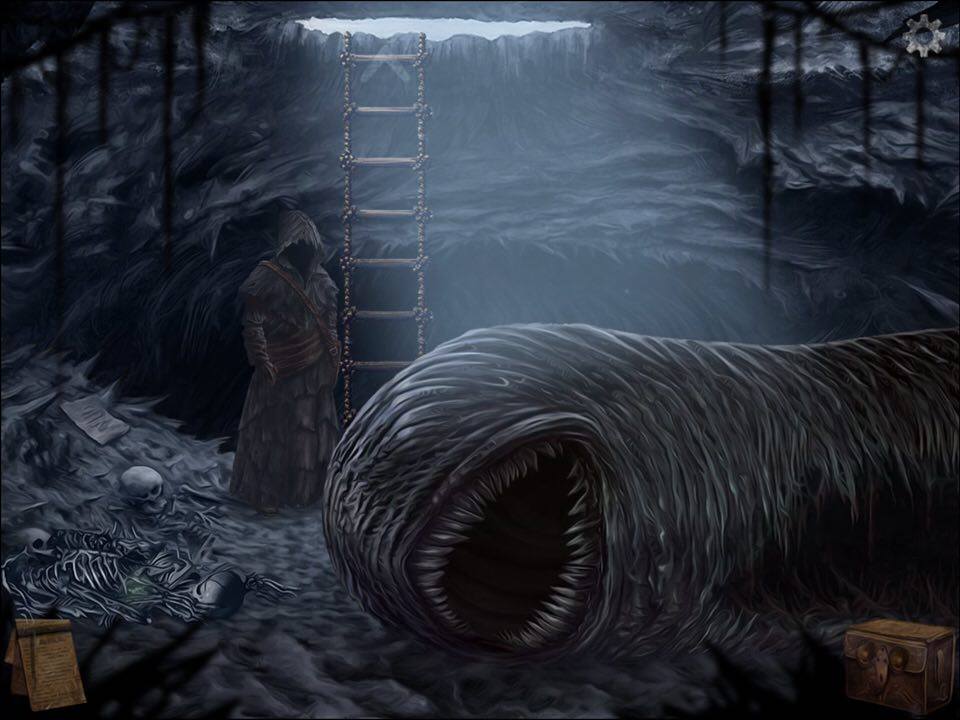 As you explore this bleak, depressing, gory world, you’ll come across various interesting characters and monsters, all more unique than the last. There are several moral choices to make, but they aren’t always obvious. You don’t always know who to trust, and it’s clear that people are hiding their true natures or lying to you for one reason or another. Trying to go for the good choice can even seem foolish or naive at times, especially if you’re a jaded person like myself who sees the world in shades of grey. It seems like madness to spare some of these characters lives or help them in general. In the end, however, the choice that seems like the obvious good choice usually is. Even if it has a bad outcome down the line, it’s more the choice in the moment that matters. For example, at one point you have to give a special item to one of two characters. But choosing the correct one leads to that character’s death later on, casting doubt on your decisions.

I won’t spoil the twist at the end of the game, but it’s a pretty obvious one based on all the themes and the basic idea of redemption that is always hammered home. In the end though, all of your choices are reviewed, and you’ll be told outright why the choice you made was good or evil. Before that though, the game does an interesting thing, and it asks you to judge yourself by choosing between a good and evil key to open the final gate. One last seed of doubt that makes you reflect on the choices you’ve made. But you can’t see the future, so keep that in mind, and just go based on the moment to moment decisions. 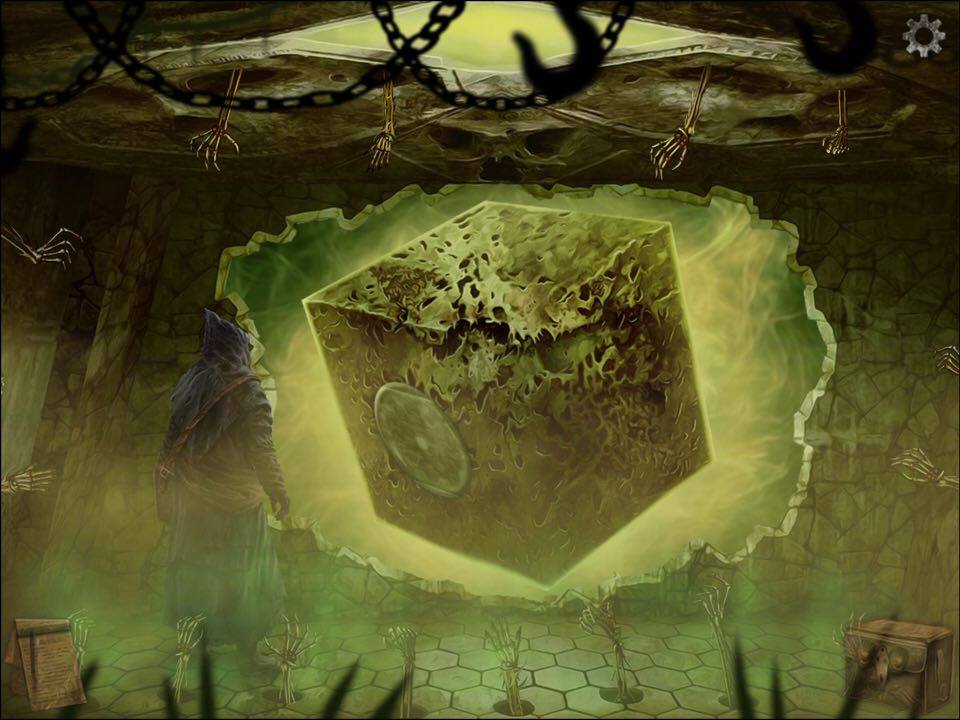 All in all, the game will only take you 3 to 4 hours to beat. You can use your final review to replay the game and make all the correct decisions, but there are only two endings in the game, and they don’t have a big payoff. That is really my only criticism of this entire game. But the journey itself was just so satisfying, and such a feast for the senses with the breathtaking 75 different hand painted scenes and the atmospheric pitch perfect soundtrack. Most of the actual puzzles involve block sliding, pattern matching, placing cogs on spokes, and stuff like that. Some people might criticize that aspect, or find it lazy, but I thought each puzzle was very well done and didn’t overstay its welcome.

In the end, you’re crazy not to pick this up if you enjoy adventure games. But you probably won’t enjoy this game as much if you don’t like stuff like Dark Souls and Dark Seed, the latter of which was another point and click adventure based on H.R. Giger’s art. I will admit, this game’s main appeal is in the aesthetics and themes, which are not for everyone. I’ve done my absolute best to look past my subjective biases and love for this kind of work to find faults, but none of the faults I found were very significant. The game is also available in a dozen languages, but aside from volume controls those are the only options. Want to know something really crazy though? This game has a lite version! (Free) In 2016, no less! So no excuses, check this puppy out.