The clicker meets the action RPG in Nonstop Knight (Free). Essentially, the progression of action-RPGs with loot, character leveling, and elements of clickers like idle revenue generation, and prestiging to reset your progress in the name of permanent stat upgrades, are combined into one game. Your hero automatically runs through dungeons, and you watch them fight, triggering special timed abilities, and using the revenue you earn to buy more and better equipment. Normally, I’m opposed to clickers without clicking, but having the timed abilities to use means that there actually is a degree of meaningful interactivity. The only problem with Nonstop Knight is that its progression slows to crawl, and stops being meaningful way too soon. 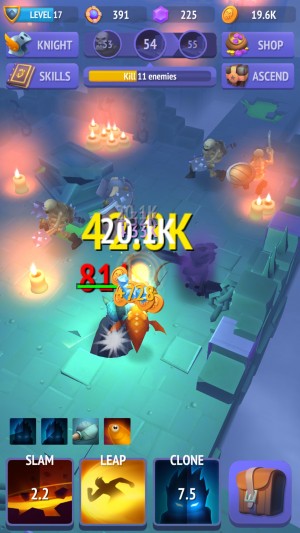 Auto-battling in action-RPGs often feels like a rather questionable feature. Like, yes, I get that it streamlines grinding, but it feels like it’s anathema to what the core of the game should be: the hacking and slashing, not necessarily the progression. Having auto-battling defeats the whole purpose of it. So why am I so accepting of Nonstop Knight, which could otherwise be called Auto-Battling, The Game? Well, Nonstop Knight is far more honest than many action-RPGs by being entirely auto-battling. It makes no qualms about the idea that progression is the game here, like most other clickers. And in fact, it manages to trump most clickers in interactivity despite eschewing clicking. You have your abilities that you can deploy in battle, and those abilities can be used to take out swarms of enemies or deploy your clones to get more help in battle. It’s still largely a passive experience, but one where you have an active influence. You even get a few different abilities to roll out with that you unlock as you level up. So there’s actually a tactical element here, it’s not entirely passive. As such, Nonstop Knight winds up being a rather clever little game if you have a particular affinity for clickers that mix things up.

I do fear that progression in Nonstop Knight can be a bit slow. at times. The main leaderboard is about which level you reach, though this is a tough goal to attain as you always reset back to level 1 with each prestige. The primary marker of success beyond just your level is that you can earn tokens toward permanent upgrades by ascending every so often, this game’s prestiging. Ascension rests you to level 1, but gives you more tokens the further you get, along with some bonuses such as additional super charge potions that let you auto-battle faster, including bosses, for a limited amount of time.

Now, you can buy a $4.99 starter pack, and I think this is a mistake to offer tokens for players because it winds up skipping through a lot of the game’s progression that’s there. You suddenly hit the tedium of the game a bit sooner, and I lost a lot of nerve to play once I reached that point. It’s a shame because you get a good amount of gems to spend on helpful items, along with a cute baby dragon that follows you around and shoots fireballs. Like, that alone is worth the cost, but I think skipping ahead in this game takes some of the fun out of it. 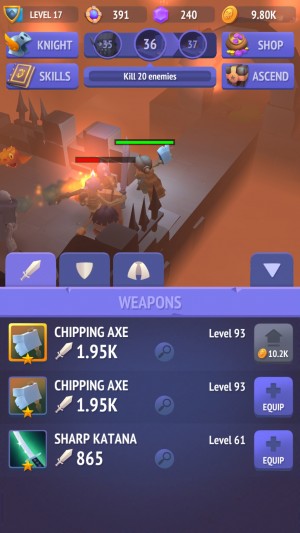 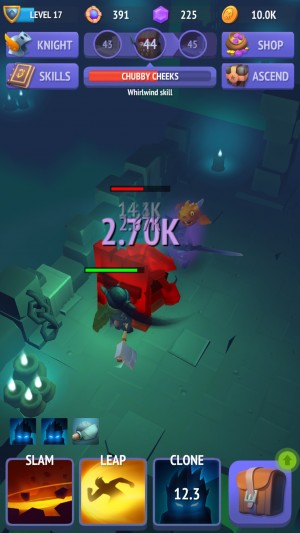 The other problem could be that the game hits a slowdown point with ascension way too soon. It feels like even with some of the powerful upgrades, I can only really get a few levels ahead of where I was before, and getting to level 62 after reaching 56 isn’t exactly a satisfactory enough leap, particularly when you have to make it all the way back through the game every single time. It also makes the loot you earn feel just a bit more worthless, like a temporary tool rather than this cool thing you’ve earned. I think there’s a lot of room for a game like this that uses clicker mechanics and an action-RPG structure to instead deliver something less centered on the reset than this is. That, or Nonstop Knight needs to take a greater cue from Doomsday Clicker (Free). That game makes every prestige feel like a meaningful leap up, where Nontop Knight fails in a similar regard.

What would help would be if the fast action potions could be purchased with in-game currency. The boss tickets you can buy with gems help, too, but those really just let you skip ahead a few levels without much benefit in between. Or at least, that’s what it feels like. In fact, I get why the video rewards cycle every few hours, but it seems a lot like the game could offer up more things for players to spend their gems on, like chests, potions, and the like, to both give players more options to boost their power and progress, not to mention encouraging players to spend more money if they want to do so.

And unfortunately, that’s the killer drawback of Nonstop Knight that keeps me from giving it more of a recommendation than other games where I’d recommend it beyond just if you were already intrigued by it. Clickers are all about progression, and keeping the player interested for as long as possible. Nonstop Knight hits that point way too soon. It’s a shame, because the core game gets so much right, at least as far as clickers go. And the action-RPG skill-triggering elements give it a unique feel. Plus, there’s that adorable baby dragon. But as engaging as this game is at its best, it just could be more fun in the long term.