Tomorrow Corporation has brought us lovely, dark, and though-provoking experiences like World of Goo ($4.99) and Little Inferno ($1.99), and this week they passed their most recent offering Human Resource Machine ($1.99) from desktop and Wii U over to mobile. As I’m always up to my ears in mobile stuff and don’t always pay close attention to the console and PC space, I honestly had never heard of Human Resource Machine, which originally launched in October of last year. However, knowing the pedigree of this developer I figured I was in for a treat, but I didn’t quite expect to be so blown away with how ingenious of a puzzle game Human Resource Machine manages to be. 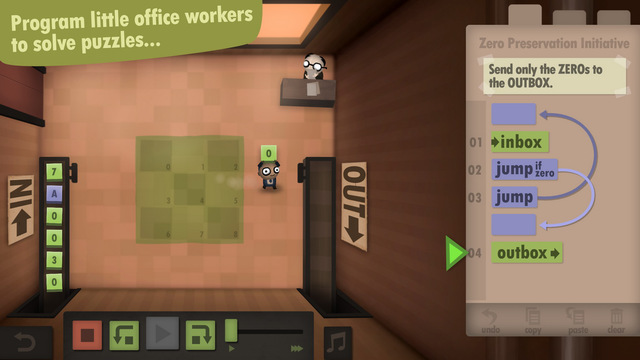 This is a game that’s based around the principles of very basic visual programming. You play as an office worker tasked with taking packages from an inbox conveyor belt and tranferring them to an outbox conveyor belt, with various rules in place for doing so in each level. For example, you may have a series of numbered boxes where you need to transfer all boxes except for the ones marked with a zero. Or you may have to grab the first two numbered boxes and add them together and end up with a box with the resulting number on it to take to the outbox. It sounds a little strange but the game does a great job at walking you through these basic principles early on. 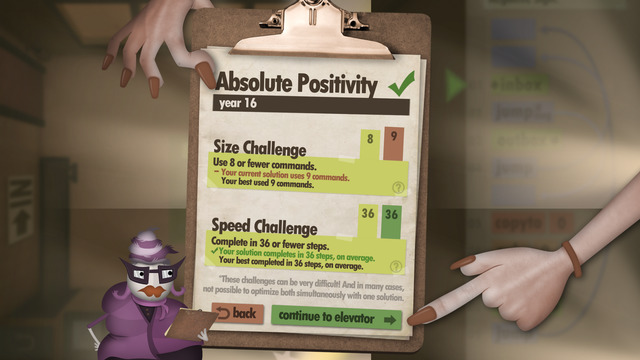 The crazy thing about Human Resource Machine is that it’s simply a puzzle game at heart, but rooted in the ideas of programming. But programming code is basically just a puzzle anyway, so it all ends up making more sense than you might guess. Even though I’ve worked in gaming for 6 years and have seen projects mid-development and talked to countless developers, I really don’t know squat about coding. After playing through just the first batch of levels in Human Resource Machine, I feel like I have a far better understanding of how code makes games work. A very rudimentary understanding mind you, but an understanding nonetheless. That’s a very powerful thing for a game to accomplish.

The thing I’m not so sure about is how seasoned programmers might take to the game. As someone who knows basically nothing, I’m finding this a fascinating learning experience. I’m not so sure if that would be true for a 20-year veteran of the craft. At least Human Resource Machine is steeped in the dark humor and tongue-in-cheek look at corporate lifestyle that you’d expect from Tomorrow Corporation, so even if you find the puzzle aspects way too easy it’s still an enjoyable game to experience. Having pars for the number of commands used and number of moves taken to complete a level adds an extra challenge to the mix as well.

No matter your level of familiarity with programming, I think Human Resource Machine is worth taking a look at. Not only have I learned a bunch from it already, but I’m finding the puzzle aspects to be challenging and rewarding, and I absolutely love the art style and music. This is a quality production through and through and is one of the more unique types of games out there, and now it has the ability to fit snugly in your pocket and travel with you wherever you go.