When a developer puts a spin on the typical auto-running formula, I’m usually there to check it out. While virtual buttons work just fine after years of acclimating to the concept, certain experiences lend themselves well to automatic movement, but there can be concessions in terms of how much we as players are allowed to interact with them. Mr. Crab 2 (Free) doesn’t improve much on the foundation that was already built by its predecessor, but as an expansion of sorts, it works just fine. 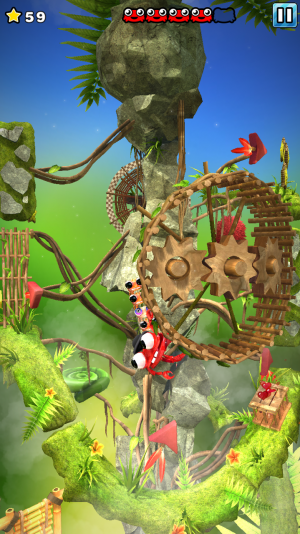 If it ain’t broke, don’t fix it — and the towering level design of Mr. Crab is definitely not broken. It’s really cool to look at a level in all its glory zoomed out, as you can tell that the designs aren’t haphazardly planned. Almost like a collective of obstacle courses, you’ll zip and dive through each section with just one motion in mind (tap to jump). There’s a lot of strategy involved too since you aren’t constantly jumping or moving — sometimes you’ll need to make split-second decisions when jumping or stay on a platform for a specific amount of time. Along the way there’s crabs to collect, hazards to dodge, and jumps to make.

Hard 2D sections have been added in thank goodness, and they work really well even when juxtaposed to the rest of the adventure. And that strong level design really is the core as there’s a sense of exploration afoot, where any given nook could house a new crab baby to find,. After playing it for a few hours I started to notice all the tiny little enhancements like more gadgets to traverse. It makes for a more varied experience overall in that there’s hardly a dull moment. The developers deserve a lot of credit

What really gets me about Mr. Crab 2 is how incredible it looks. With such an unassuming name that you’ll probably forget seconds after reading this review you wouldn’t expect much, but the engine is beautiful, and the realistic yet surreal themes gel well together. No one color scheme overstays its welcome, and that includes the environments and the character models. It’s also great that everything on-screen is clear, so it’s straight-forward in terms of divining where to go next. Some zones are a bit more cryptic than others, but most are spot-on in terms of clarity. The free game is supported by video ads for the most part, which can unlock additional spins (so to speak) on the prize machine. 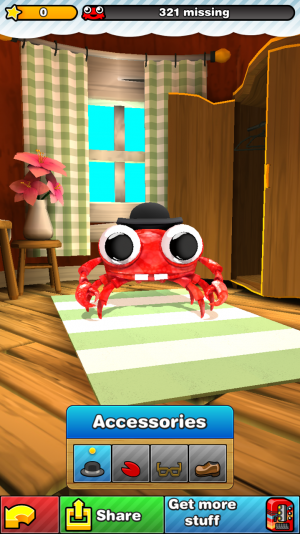 It’s here you’ll find new characters, accessories, and other odds and ends that can morph the physical appearance of your character or outright change them into a new creature. While most rewards are cosmetic, levels are bundled in to some degree. You can also go for more spins with 500 “stars," an in-game currency, but you’ll get those so infrequently it may as well not exist.

Of course, you’ll have the option to pay $1.99 for more characters upfront, or $6.99 for every level, which amounts to buying the game outright. Given that the game is actually free, I didn’t really get any sense of uncertainty or sleaze from the setup. Just keep in mind that 12 are free, and there are 64 in total, so if you don’t have the patience for unlocking more through a roulette or paying for it, you might be out of luck.

Until recently I had never even heard of the Mr. Crab series, but checking it out spurred me into action, and having played both games, I’m glad I came across it. The second game makes some concessions for streamlining, but it ultimately comes out on top with a stronger set of stages.