Castles of Mad King Ludwig($7.99) is a curiously accurate description for the monstrous architectural nightmares that are created in the midst of playing this board game that is new to iOS. I have a lot of respect when you can capture so much of a game’s essence in the title. If you are unfamiliar with the game, you owe it to yourself to get acquainted and prepare to toss feng shui out the window.

Castles was created in 2014 by Ted Alspach and is a castle building game. Much like Suburbia, players take turns adding onto their existing layout in order to earn points, currency or special bonuses. Turn order rotates so the person who plays first is different each round. The person who is last is the Master Builder for that round and basically gets to choose which new castle rooms will be expensive and which ones will be cheap. The winner of the game is the person who amassed the most points through gold amount, bonus objectives and room placements and completions.

So each player has their own play area and you take turns buying different typed and sized rooms to add onto your castle. You might end up with a large dining room with a stairwell leading down to a moldy basement or sewer and depending on each of the rooms, you might get bonus points if you meet the criteria. In the middle of each of the rooms, there is a list of other rooms that have a special effect when connected directly. Usually this means earning more points for setting up a combo. This is where the meat of the strategy of the game is. Being able to orchestrate room combos and being able to spot and prevent opponent room combos is vital to amassing points. 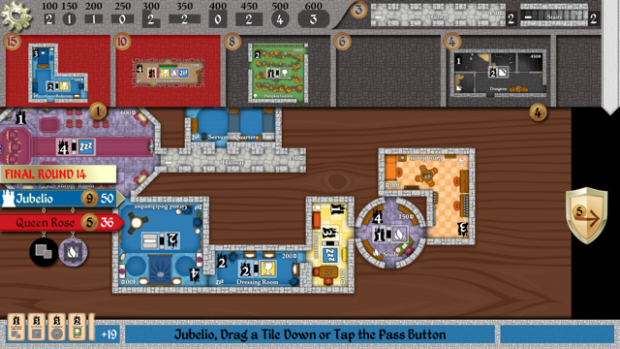 As you come to the end of your first game, you’ll find a preposterously laid out floor plan with random rooms stuck to your castle like wayward barnacles. This is where the name of the game really strikes a chord for me. No king in their right mind would design castles like the ones that come of playing this game and it is pretty funny looking at how dysfunctional they end up being just to achieve some synergy of extra points. Hallway to nowhere? Yep those happen. A swarm of nothing but kitchens and no sleeping quarters, dining rooms or halls? Yes that too can be a castle if in name only.

If you check out Tom Vasel’s review of the board game, you’ll see that he is on the fence about whether this game is better than Suburbia or not. In my opinion it is a bit better for a few reasons. The first and primary reason is that Suburbia has less flavor to it. The tiles you use are all hex shaped and really don’t have nearly the cool factor that all the different shaped rooms in Castles have. Being able to place grand concert halls and tiny bedrooms and sprawling gardens all feels more immersive just because they have different physical shapes and sizes. This is much closer to actually figuring out a floor plan than just playing with hex tiles. It also adds a level of strategy in that you will end up needing to really determine for some of the campaign missions what is the most efficient use of the area available. Another reason I like Castles of Mad King Ludwig is that you don’t get bonuses from other people’s castles and it makes the construction of yours much more directly under your control. 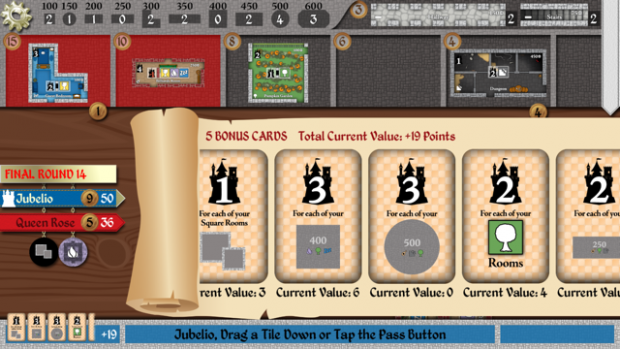 At a trim 92 megs, the game does not take much hard drive space which is not surprising. As a product of a one man development team, the game has solid features, but the one I imagine that many people have come to expect from some of the bigger developers porting board games over is online multiplayer. The visuals in game are solid but like most boardgames, not a selling point. The display on my 6+ makes me feel like the game is primarily intended for the iPad. Visuals are just a little bit smaller than I am used to on the phone.

While I wish the game had online multiplayer(a feature that the developer has said will be considered if the response to the game is positive enough), the campaign mode provides a lot of content to sink your teeth into. Most board game apps really don’t lend themselves to solo play very well, but I am happy to say this is not the case here. If you like the idea of building castles, goofy or otherwise, and like a little bit of economics simulation, this game is tailor made for you.