Hello, gentle readers, and welcome to the RPG Reload, the weekly feature where we always seem to be starting from scratch. Each week, we take a look at an RPG from the App Store’s past to see how it holds up in the futuristic, post-apocalyptic world we inhabit. It’s a chance to revisit old favorites, reflect on their overall place in the iOS library, or simply to take a deeper dive than our reviews usually allow for. As the Lukahn of this little Circle Of Sages, I decide which game gets the canoe from week to week. If you feel I’ve missed any awesome games, however, you can make a suggestion by commenting below, posting in the Official RPG Reload Club thread, or by tweeting me at @RPGReload. While it might not show up for a while, it will be added to the master list, so you’ll see it sooner or later. 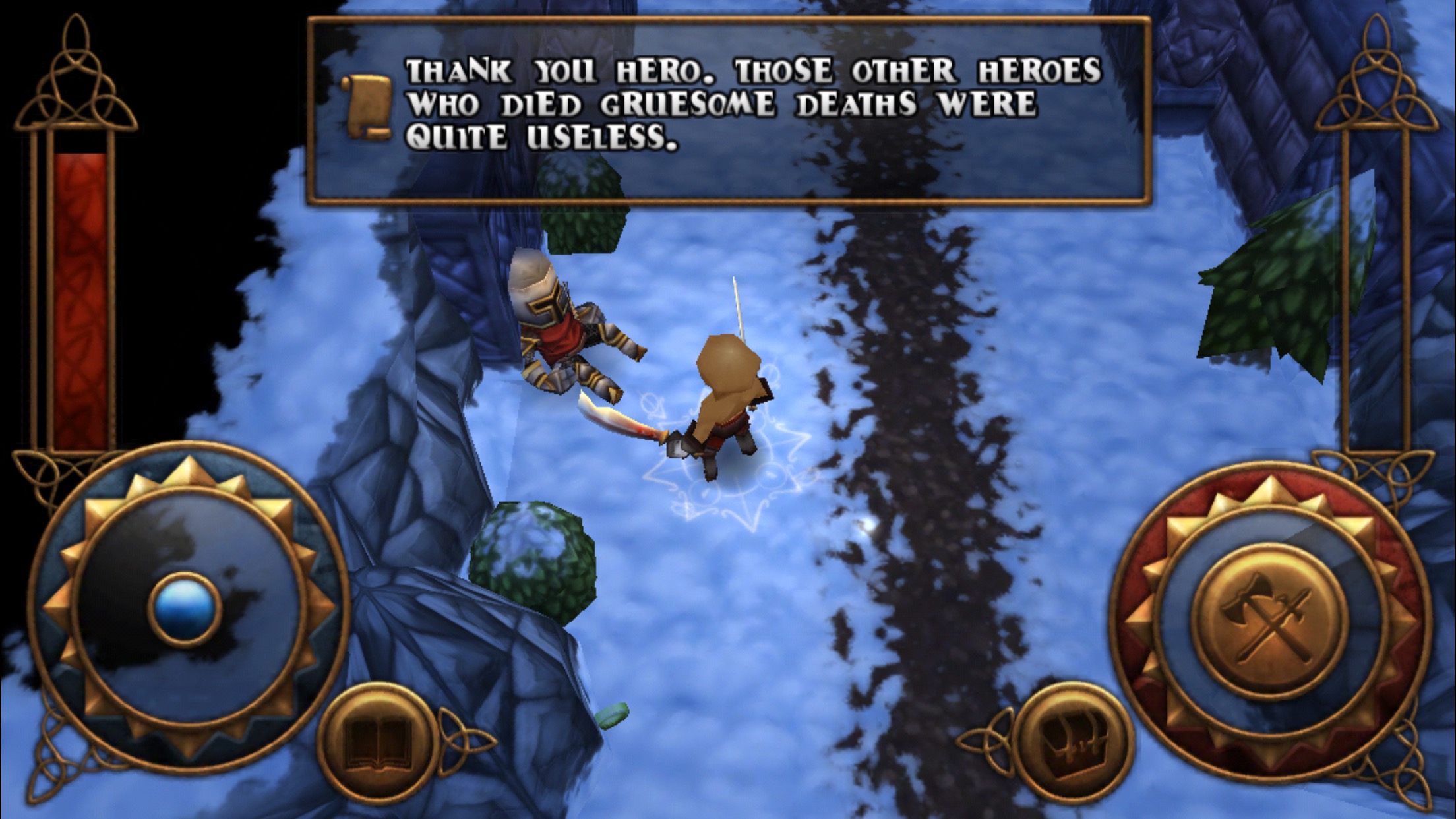 After Ravensword: The Fallen King ($2.99) got Crescent Moon started and Aralon: Sword And Shadow (Free) proved to be a wild success, the publisher’s name had become synonymous with iOS RPGs. While Crescent Moon’s next internally-developed RPG, Ravensword: Shadowlands ($6.99), was still quite a ways off, the publisher had started to work with other iOS developers to bring their games to market. Not all of those games would be RPGs, but many of them were. One of the more successful of the bunch was Pocket RPG (Free), a light action-RPG from South African developer Tasty Poison Games. It’s more of a mindless hack ‘n slash than the average RPG, but there’s no questioning it has a certain compelling quality to it.

Tasty Poison first revealed the game on the TouchArcade forums in August of 2010, and very few of the details outlined in those first posts changed in the final game. The idea was to make a stripped-down RPG experience that was part shooter, part roguelike, and part hack-and-slash action game. Initially planned for release later that year, the game ended up needing a little more time to finish development. Crescent Moon got involved with the game in October of 2010 and offered what assistance they could to help the developers finish and market the game. Pocket RPG eventually released in July of 2011 for the iPad and around a month after that on the iPhone. The game received a relatively warm reception from critics and players alike, though there were a few bugs at launch that needed to be ironed out. 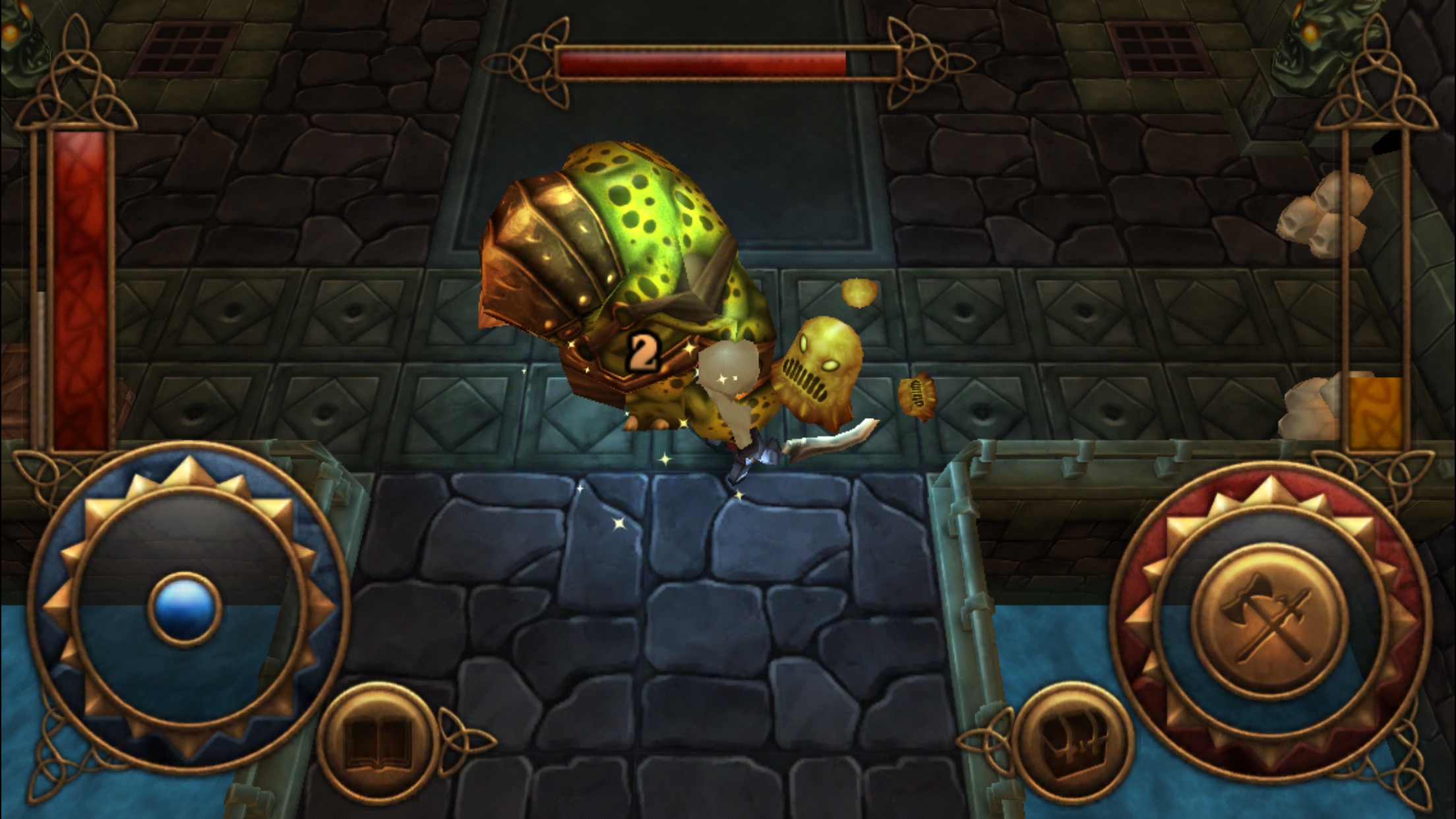 In contrast to Crescent Moon’s previous RPG release Aralon, Pocket RPG was incredibly simple. You begin by selecting from one of three job classes. The Blademaster wields a weapon in each hand and is a master of melee combat. The Dark Ranger uses projectiles as a means of attack, with a play style not far off from twin-stick shooters in practice. The last character, the Battle Mage, is like a mix of the two, able to attack at a range or close up, but not as well at either as the specialist classes. You then enter a series of semi-random top-down stages spread across eight worlds where you’ll smash enemies and objects in pursuit of loot and experience. Pretty standard stuff.

What makes Pocket RPG a little different is that after completing each world, you lose all of that loot and experience. Wait, what? Yes, you start each new world set back to level one, naked as the day you were born. No awesome flaming sword of hacking, and all your grinding was for naught. Kind of. While your level is reset and you lose your loot, between each world you’re able to pick up new permanent skills and buy some loot that may or may not appear in stages from that point forward. So while the traditional measures of RPG progress are constantly being zeroed out, you’re still becoming stronger the more you play. It sounds questionable, but it ends up working really well. 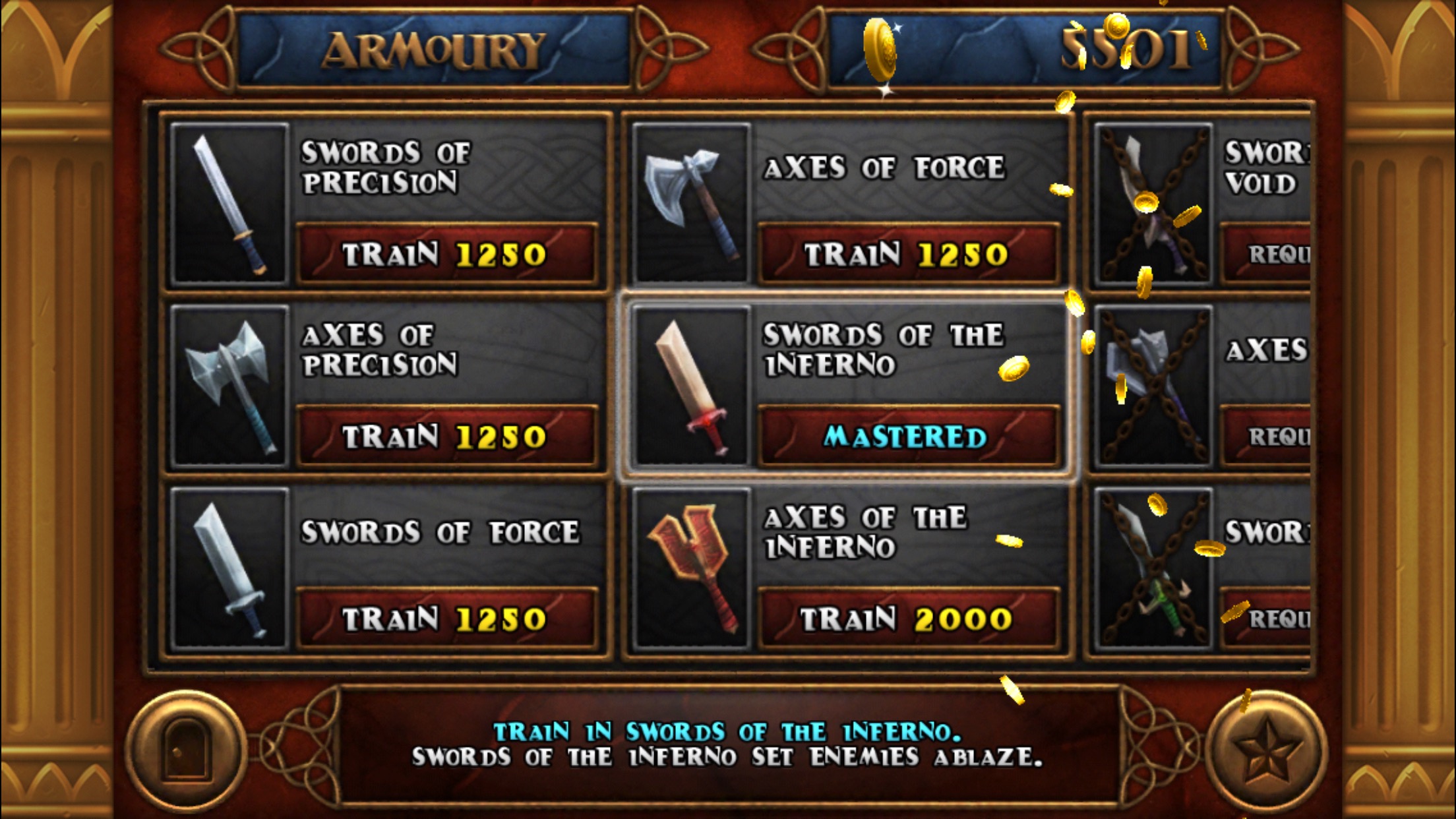 Given the kind of experience the game is going for, breaking the game up into a series of mini-adventures works quite well. At the same time, putting in some sort of overarching character progression gives the player a sense of ownership. Indeed, the presence of a save spot for each character type seems to back up the idea that you’re meant to make each of them your own, taking them out on adventures and making them a little stronger each time. The downside of this is that while your character does become stronger as you play, the loot itself starts to feel like it’s all a bit throw-away. It’s really frustrating to find some excellent gear knowing that you’re going to lose it all soon.

Resetting the experience each time is pretty clever, though. As you play through the game, even though you start fresh on each world, you’ll level up faster and faster. Each level up is not only satisfying in the aesthetic sense, it also serves the practical use of topping off your life meters. Thus, even characters devoid of any kind of innate healing ability can usually survive by the grace of rapid level-ups. From a purely psychological point of view, having the level ups come fast and furious is a clever bit of design. Much as I can appreciate the way, for example, classic Dungeons & Dragons treats its higher levels like spun gold, I suspect people generally prefer that aspect in the earlier stages, where gains come frequently and are of greater relative value. Pocket RPG puts you in a perpetual loop of getting a lot of useful level-ups. 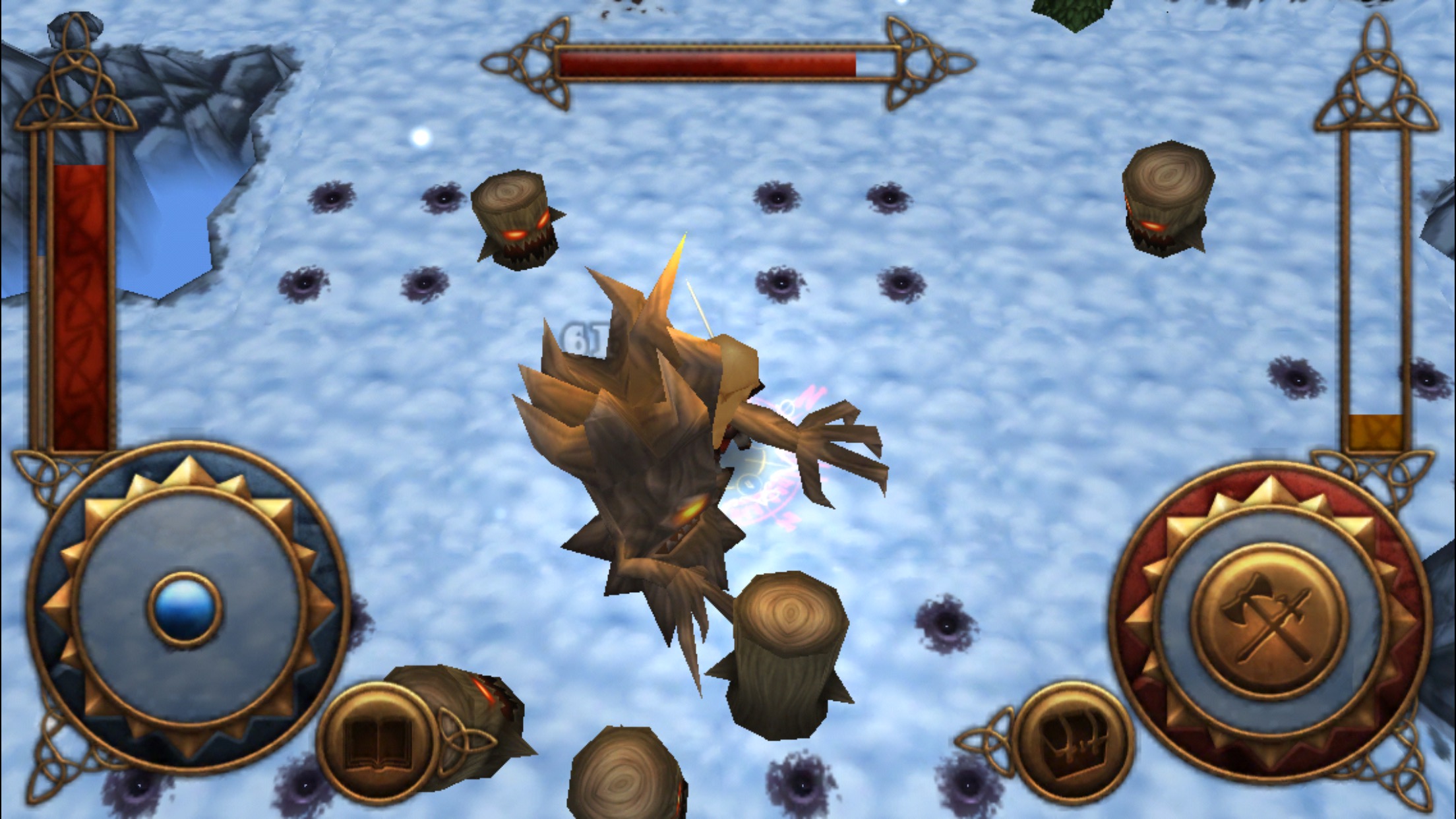 In as far as the game aims to give players a light, easy to pick up (and put down) action-RPG experience, it achieves what it sets out to do. It’s simple enough that it still works fairly well as a game even after almost five years, even if it does get more than a little repetitive in longer sessions. While it’s been a few years since it’s seen an update, Pocket RPG functions mostly fine on modern hardware and iOS versions. I had some sound issues here and there, but nothing that impeded gameplay. It could probably use another update at some point, if only to better support the many screen sizes that have sprung up since 2013, or perhaps add in MFi support, but you can still enjoy it as-is.

The iOS platform has been home to a lot of enjoyable action RPGs. Sadly, many of them are no longer on the store, but Pocket RPG is still going strong. While I’d personally take something like Ys ($4.99)  any day of the week over this game, I can’t deny that it has a lot of appeal in times where I don’t feel like settling into something that requires more attention. I think, in its time, it was a great chaser for the complex Aralon, and in the here and now, it still has aspects to its design that are worth appreciating. It would be interesting to see the developers try a follow-up, but Tasty Poison strikes me as a developer that likes to stick their fingers in a variety of pies. They may never come back around to this genre again, but if they do, I’m sure at least a few RPG fans will have kept a light on for them.

That’s just my take on Pocket RPG, though. What do you all think? I want to know, so please leave a comment below, post in the Official RPG Reload Club thread, or tweet me at @RPGReload. Be sure to tune in to the latest episode of the RPG Reload Podcast on Monday to hear Eric and me have a conversation with Josh from Crescent Moon. The talk mostly centers around Ravensword, but Pocket RPG does come up here and there. As for me, I’ll be back next week with the next part of our ongoing History Of Handheld RPGs feature. Thanks for reading!

Next Week’s Reload: The History Of Handheld RPGs, Part Nine