Apple’s been known for their Apple Design Awards, honoring the best apps and games on the App Store. Google hasn’t had anything similar, but they’re doing that starting this year, with the Google Play Awards debuting at Google I/O 2016. On May 19th at 7:00pm PDT, Google will honor Android apps in several different categories, including several gaming categories. The Best Game category is an interesting one, as the nominees are an interesting bunch: Alphabear (Free), Clash Royale (Free), Clash of Kings (Free), Marvel Future Fight (Free), and Star Wars: Galaxy of Heroes (Free). Nothing wrong with that list, just different from what my list of top nominees from the past 12 months or so would be, though Clash Royale would definitely be on there. Send help. 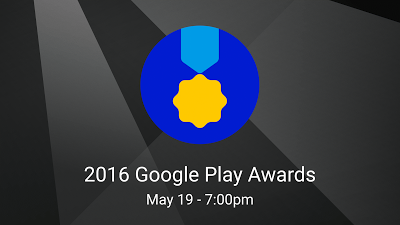 There’s also a “Standout Indie" category, “Best Use of Google Play Game Services" category, and “Early Adopter" category including Minecraft Story Mode (Free). Google seems to be taking more of a bigger role in trying to put apps on their store into the spotlight, especially with things like the Indie Corner just introduced on Google Play as well. The App Store is still the cultural leader in mobile gaming, and steps like this might be key to ensure that Google plays a bigger role.