There are a lot of different ways a piece of interactive fiction can succeed. Some of them tell a great story, some of them give the player a genuine feel of agency in the plot, and some of them have interesting puzzles. Some have tense, RPG-like battles, while others have no fighting at all and focus on building character relationships. A few just take a very interesting setting or theme and run with it. But for all of these strong points that gamebooks can take advantage of, there are a ton of pitfalls that, if not specific to the format, are at least more potentially devastating to the overall enjoyment of a work. It’s not an easy thing to put a smooth, highly-interactive narrative together that manages to be strong enough to carry an entire game. It involves almost all of the headaches of writing a good book combined with the difficulties of quality game design. 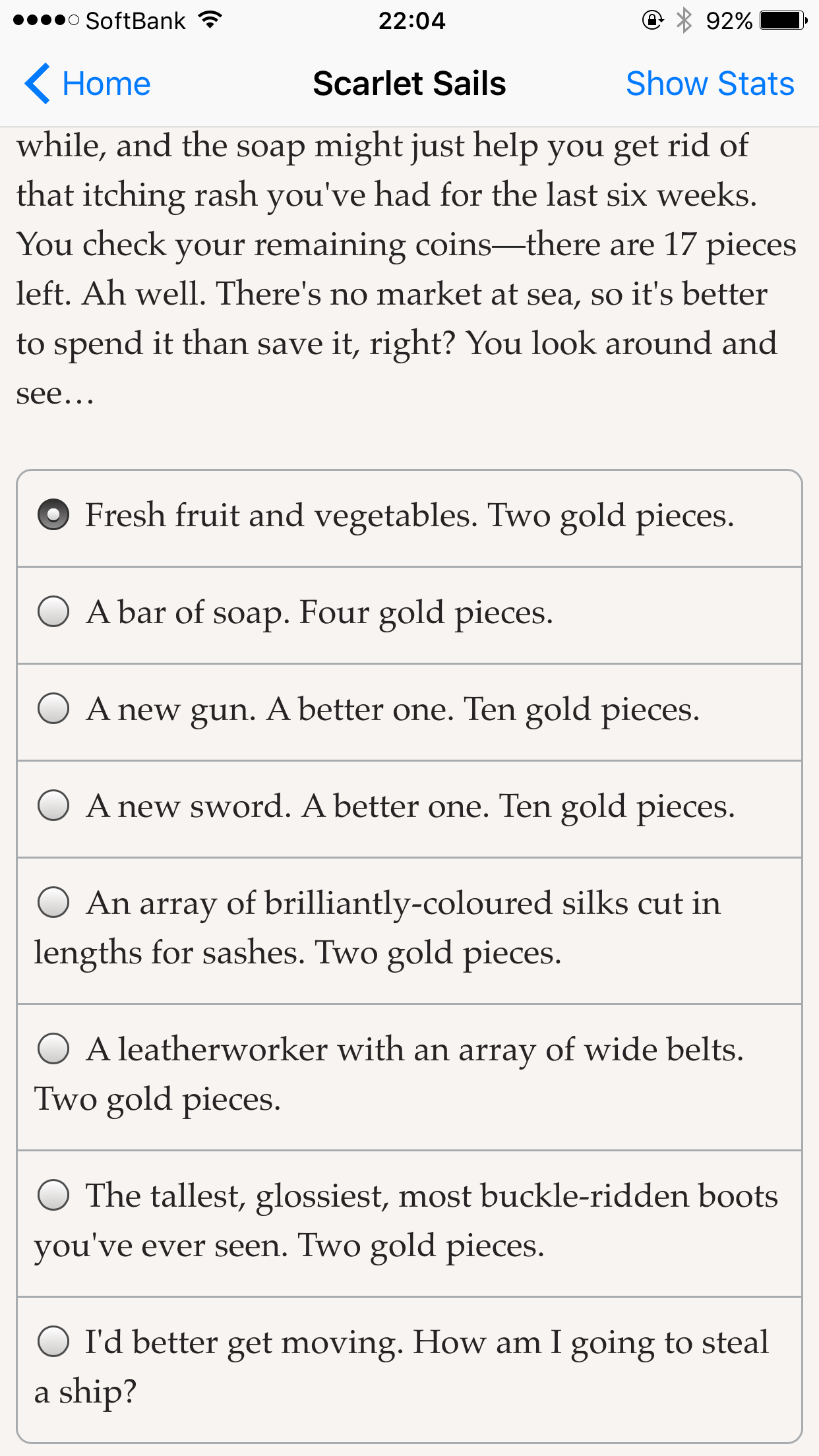 While Scarlet Sails (Free) gets a lot right, it drops the ball in at least one big way. The text passages feel incredibly disjointed at times, like you’ve somehow missed things between the pages. It’s particularly bad in the back half of the game, as the story appears to be rushing towards its conclusion after a very enjoyable build-up. You can almost picture somebody skipping pages manically to get to the stabby bits and cannon fights. It’s a serious disruption to what is otherwise an enthusiastically-written tale of fantasy pirates on the open seas. It’s a rollicking adventure story, and a fairly challenging game to boot, where death comes easily to the inexperienced and foolish. It’s a little brief, and you’ll really feel that towards the end, but the story arc is satisfying, at least in the broad sense. It’s just missing a lot of vital connective tissue, frequently taking you out of the story right when you’re getting into it.

You play as a lowly pirate who soon stumbles upon an opportunity to achieve something greater. After a bit of initial set-up, you’ll find yourself as the first mate under the command of a deadly pirate captain on the Scarlet Sails, a ship with, well, red sails. As is typically the case with ChoiceScript games, you get a great deal of input into exactly who your character is, all the way down to their gender and sexual preferences. Right from the start, nearly every choice you make will affect your stats in one way or another. A pirate’s life is dangerous, and you’ll have many opportunities to meet your end along the way. It’s not enough to make the right choices, you also need to have the stats to pull them off. By the time you reach the climax of the story, if you’ve played the game as too much of a dabbler, you’ll find you’re not good enough at anything to survive. I like that it has that bite to it. It feels very honest to the setting. 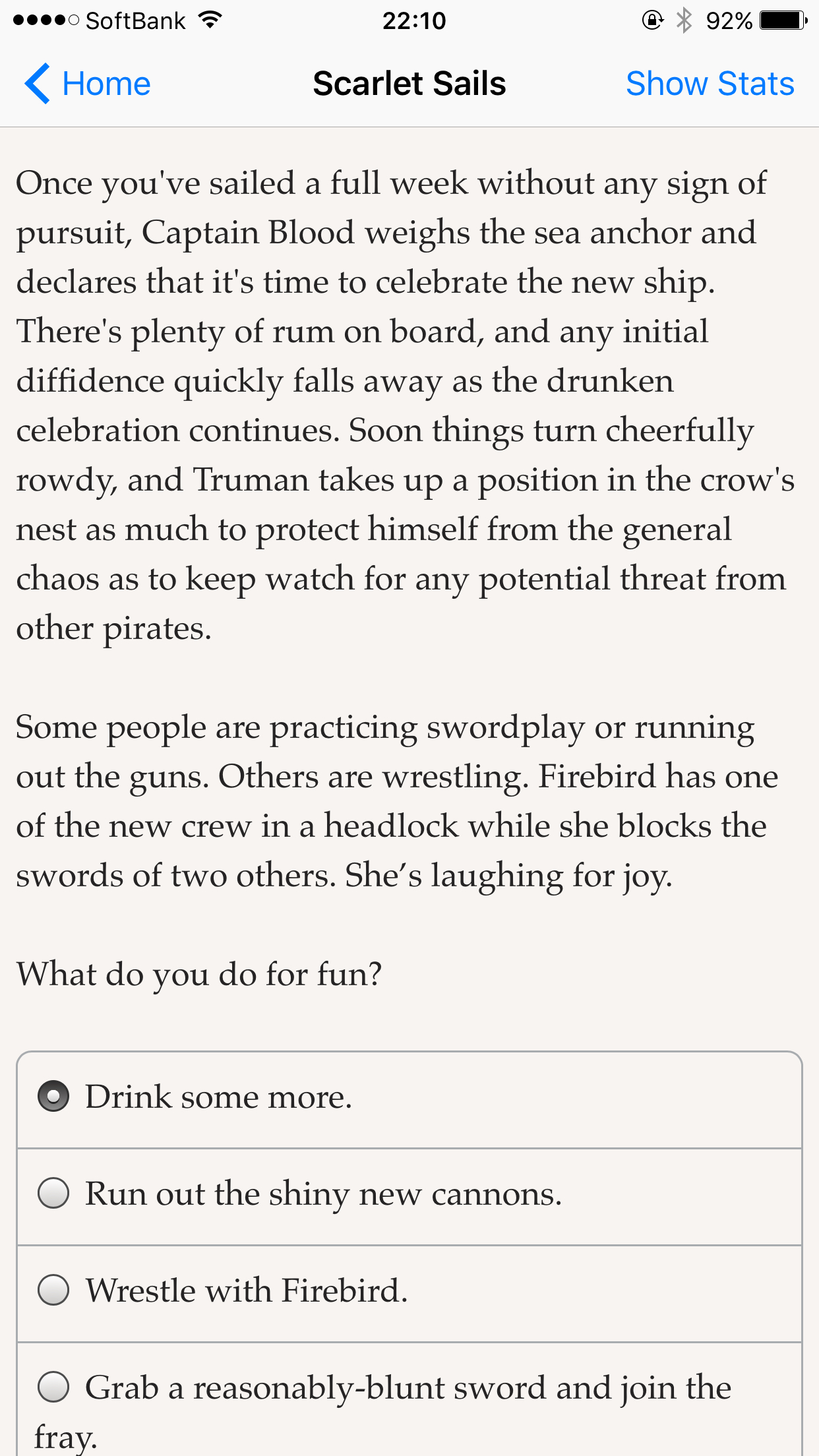 In a rare case for a ChoiceScript game, you can choose a difficulty setting in Scarlet Sails. This setting determines exactly one thing. If you choose the pirate’s life, the harder setting, you’ll have no clues as to which stats each choice’s chance of success depends on, while if you opt for the easier setting, you’ll get some very specific clues as to what each choice requires. Those who have experience with other ChoiceScript games will likely do just fine with the harder setting, but it’s nice to see a branch extended for players who want a little less guesswork in their games. It only makes the game marginally easier, since you won’t know exactly which stats you’ll need to train up for success down the road. Personally, I enjoyed playing through with the hints on just to see more of the nuts and bolts behind the cover, so to speak. Some of the calculations for success were far more complex than I had guess on my harder playthrough.

Apart from the problem of text passages not smoothly connecting to each other at times, the quality of the writing is quite good. The author, Felicity Banks, expresses a clear affection for pirate stories with her words, and while the story has more than a few cliches, it feels like they’re used knowingly to help some fanciful situations resonate more readily with the reader. I’m impressed with how well the plot manages to dance around the player’s choices, but it also feels like it’s railroading you pretty hard past a certain point. It seems like you have some big choices to make, and you’d think that would result in some wildly different experiences on subsequent playthroughs. The bulk of the text doesn’t reflect that, however, simply gathering up any pieces you may have shattered and hammering them back on as best as it can. The biggest casualties of this approach come in the interpersonal relationships between characters, whose attitudes towards one another sometimes seem to turn on a dime. It’s another example of the game feeling like it has missing pages that should connect individual events more carefully. 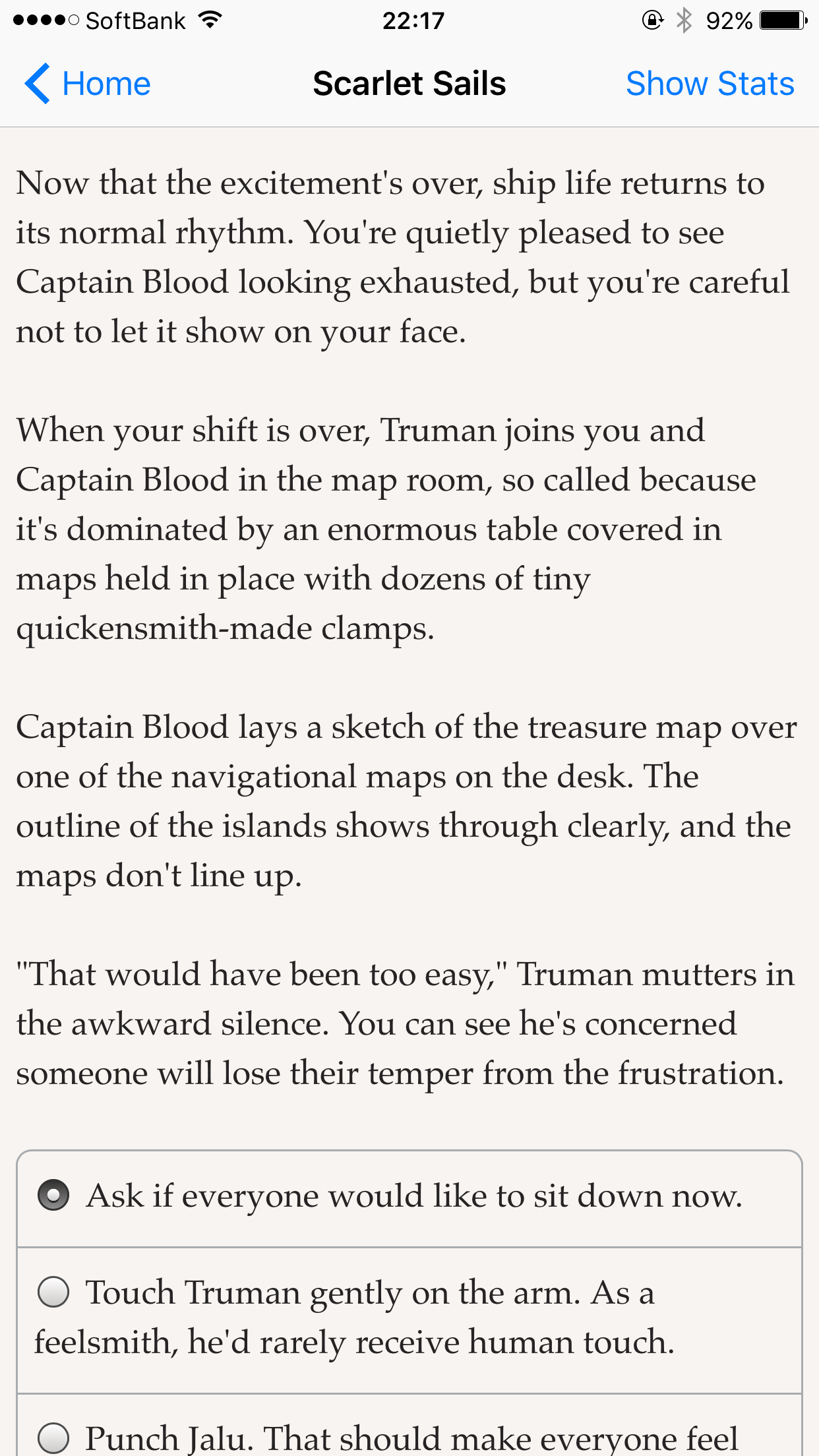 As is the case with a lot of the shorter ChoiceScript games, the romantic relationships in Scarlet Sails feel creaky at times, and depending on how you play the story, can feel oddly tacked-on. This is partially a consequence of how much rope the game tries to give you, I suspect. Another big reason is likely the game’s rather brisk pace, which leaves little time to plant the seeds of believable relationships and cultivate them properly. Scarlet Sails does a good job of establishing interesting, memorable characters, at least, even if it doesn’t really seem to know where to go with them. The cast is kept small enough that you won’t find yourself struggling to place names, and the small social circles I’d imagine that pirates travel in is as good an explanation as any for the bigger coincidences in the story.

The first few sections of the game are free to try, with a $2.99 IAP to unlock the rest. It’s nice that you can give it a try, but the story is definitely front-loaded in terms of quality, so if you choose to buy in, do so with that knowledge in hand. Like other ChoiceScript games, Scarlet Sails supports Game Center achievements and VoiceOver accessibility. I also really enjoyed how, after you’ve finished a playthrough, the game compares you to a “real" historical pirate based on your choices. It’s a nice touch. There aren’t any pictures, sound effects, or music to go with the game, so if you’re not the sort that can get by on text alone, this might not be the game for you.

Scarlet Sails is a decent adventure that might appeal to those who love exaggerated tales of swashbuckling pirates, but it feels to me that it could have been a much more satisfying experience if it had a little more narrative padding. As it is, there are too many times in the story where events seem to jump around, making the moment-to-moment action hard to follow. The character interactions could also use a lot more breathing room, and the back half of the story feels absurdly rushed. Nevertheless, I enjoyed the challenge Scarlet Sails had to offer, and it was awfully interesting to get a peek behind the curtain of the mechanics with that other difficulty mode. I just wish the book part of the gamebook had been handled as well as the game part.