Flipped Out – The Powerpuff Girls 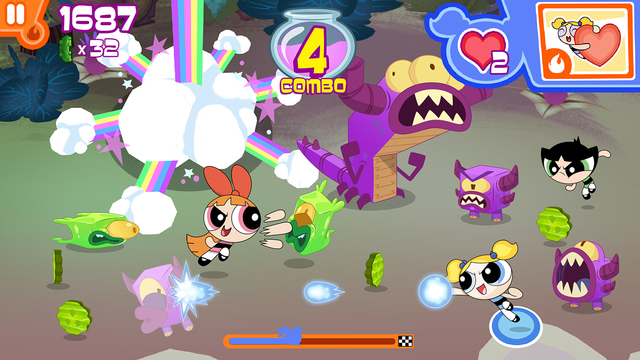 As you can probably guess from its unwieldy title, Flipped Out is both a match-3 game and a fighting action game. In fact, this is the one major thing that makes this title so unique to me – Like the title alludes to, you can literally flip your device between portrait and landscape orientation in order to switch between the matching game and the fighting game. It sounds incredibly gimmicky, but no matter which way you end up playing Flipped Out is an extraordinarily fantastic game.

Labeling the matching mode a “match-3" doesn’t really do it justice. Sure, you’re matching 3 of something to clear them from the playfield, but this is unlike any matching game I’ve played before. You actually swipe one of your girls in any of 8 directions towards baddies who are spread around the screen. When you come into contact with an enemy, you can then fling them towards other enemies on the screen, with the aim of matching 3 or more of them together to clear them from the board. It’s a super unique way to utilize a match-3 mechanic and make it feel fresh. It’s like an “action match-3" if you will.

Of course you can always tilt your device into landscape mode which turns Flipping Out into more of a side-scrolling brawler. This mode uses a tap to move, swipe to dash, and tap enemy to auto-attack control scheme. Since you again can use all 3 of your girls, it ends up feeling a lot like Battleheart ($2.99) as you’ll need to manage your team by assigning them to attack different enemies around the screen at different times. It’s stupidly fun.

The crazy thing about Flipping Out is that I can’t decide which version of the game I like better. The matching is super fun, strategic, and challenging. The brawler portion is frantic and full of constant action, and as someone who usually prefers virtual controls to tap-to-move stuff, the control system here is super satisfying to use. The neat thing is that you don’t have to decide on one or the other, you can simply play whichever one you’re in the mood for at any given time. Oh, and I almost forgot to mention, but despite this being a seemingly ripe game type for free to play, Flipped Out is a fully paid game with no IAP.

I’m surprised that more games haven’t taken advantage of the two orientations iOS devices allow for, but I’m very happy that Cartoon Network has teamed up with a developer as inventive as Grumpyface Studios to bring us all Flipped Out – The Powerpuff Girls. Whether you’re a fan of the cartoons or not, this is one that’s worth checking out for any fan of great mobile games.