One of the fun things about following a specific platform over a number of years is watching how things progress. Developers and series will pop up, and if they hang around, you can see what they do to build on what they did before to try to make an even better game. Sometimes it works out, and sometimes it doesn’t. In the case of developer TouchMint and its Adventure To Fate series of turn-based RPGs, it’s happily been the former. When the first game launched almost two years ago, it was a fun, somewhat rough game that got better with a couple of updates. Last year, a free-to-play follow-up came out, focusing almost entirely on the combat system and character development mechanics. That game, too, got some really nice updates that made the game better. I don’t know what the update plans look like for Adventure To Fate: Quest To The Future ($3.99) looks like, but even in its present state, it shows the experience TouchMint has gathered in its own personal quest for glory. 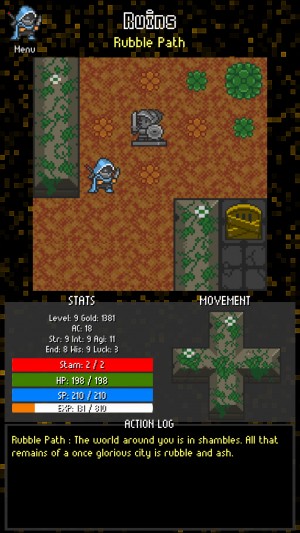 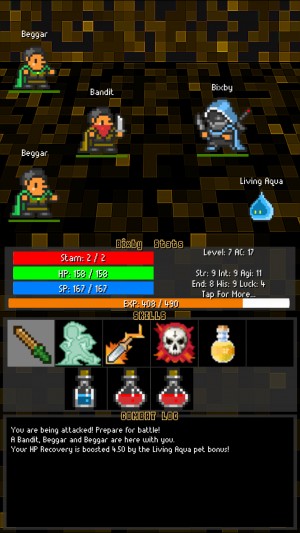 In the broad strokes, Quest To The Future is fairly similar to the first game, Quest To The Core ($2.99). Dungeon exploration makes its return here after being cut from the second game, while all of the combat and gear mechanics that were added to the sequel are obviously present here. A few things have been streamlined. Notably, you can no longer select your character’s race separately from their class during character creation. You simply choose a class or race from a selection of six. Once you’ve done that, you’ll be given some story exposition and dropped into a safe area where you can buy gear, heal, and so on. The door to the first dungeon of five in total is sitting right in front of you, so you can head on in and get ready to fight. 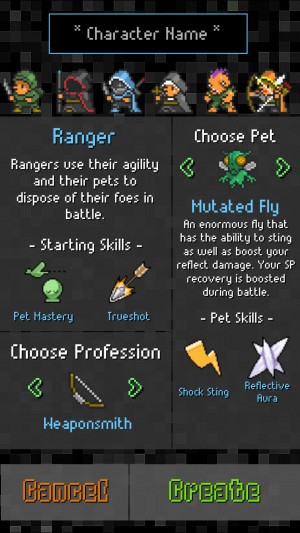 As in the first game, the dungeons are made up of small, inter-connected rooms. It only takes a few steps to go from one end of a room to another, but there are always at least a couple of things to search out or interact with on each screen. As you walk around, you’ll stumble into random battles with packs of enemies. Thankfully, the encounter rate appears to have eased up some in Quest To The Future when compared to the first game. You won’t be pounced on every step or two here. Instead, it’s every three or four steps. That might sound like a little difference, but it feels big. You’ll find plenty of loot laying about, and although a lot of it serves solely as materials for crafting, there are plenty of neat rare weapons and armor pieces to collect, too. You’ll usually be hunting keys while you’re exploring, some of which can be found in chests, while others can be pulled off the fresh corpses of your opponents. Whenever you need to head back to town to sell things off or recover, you can simply portal out and come back to the same spot when you’re ready.

For the most part, the dungeon crawling aspect of the game isn’t terribly different from the first game. Small tweaks have made it better, but the strength of Adventure To Fate is as it always has been: a solid, tactical, turn-based battle system that gives you lots of options for how to approach each combat. The skills you carry into battle with you are determined by your class and level, and you’ll eventually reach a point where you’ll have more skills than open battle slots, so you’ll have to consider which ones you’ll need to equip for the fights that are coming up. Equipment can also have a variety of special effects attached to it, so it makes sense to keep a few different ones around for certain areas. Your inventory is limited, however, so you can’t bring too much with you. Also as before, you have to equip potions to your belt to use them in battle, so even if you’ve filled your pack with health restores, you can’t just chug your way to victory. 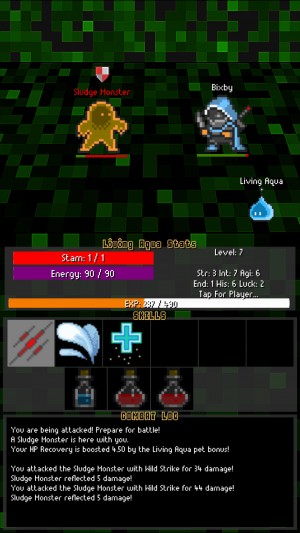 The main new addition to the battle system comes from your pet, who works as a second party member that you can swap around according to your needs. They aren’t nearly as powerful as your main character, mind you, but you can use them to cover any weaknesses your character class might have. Having a second character to control opens up a lot of new battle strategies, too. The starting pets are useful but fairly limited. The good news is that you can find a ton of other pets out in the world by searching around. The additional power they bring to your group makes for great motivation to explore the dungeons thoroughly, lest you miss anything cool. You’ll need some of the later pets if you want to survive the brutal boss battles in the second half of the game especially.

As with the previous game, there’s a ton of loot in Adventure To Fate: Quest To The Future. Your character has equipment slots for just about every part of their body, and there are a bunch of pieces, regular and magical, for each slot. The best gear in the game is again reserved for the crafting system. When you roll your character, you’ll choose from one of six different crafting professions, each with access to certain types of gear. Since you can’t change your profession, the only way to get all of the gear in the game is to play through with multiple characters. After clearing the game once, you’ll gain access to a special lockbox that will allow you to move items between different characters. You’ll also unlock a special arena that lets you face off against just about every enemy that has ever appeared in this series. 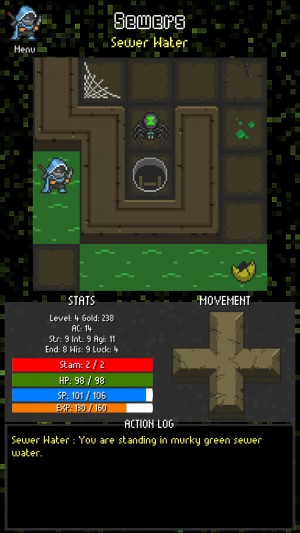 The UI has more or less been carried over from the latest version of the last game, with some minor tweaks like substituting an on-screen directional pad in place of tapping a square to move. There are occasional moments of disorientation or frustration, like when you step into a seemingly normal square and find yourself in the next room, or when you want to play around with your inventory. Those issues aside, Adventure To Fate has come a very long way with its interface, and this game even fully supports VoiceOver for visually-impaired gamers right out of the proverbial box. Since this installment of the series is a paid game with no IAP, you don’t have to worry about things like advertisements, or useful character management features being locked behind a paywall.

Outside of the UI and monetization system, the presentation of the game hasn’t changed greatly. There are a few good chiptunes to play along to, and the visuals lean heavily on the decent-but-overused Oryx sprite set. This time around, the game draws from a different set of Oryx sprites than the previous games, at least. You probably won’t have seen many of these sprites in other games, even if the style is very familiar. The various backgrounds are pretty cool and do their best to set up the time-spanning story. They basically have to do that job on their own, because you won’t get much story beyond the initial push.

Make no bones about it, Adventure To Fate: Quest To The Future is an RPG for those who are looking primarily for an enjoyable, yet familiar, battle experience. The exploration aspects are okay but not particularly exciting, and the story is barely there. When it comes to messing around with your character’s parameters and having some good old-fashioned turn-based fun, that’s where Adventure To Fate has you well-covered. This particular taste of comfort food isn’t going to be for everyone, and the series is at risk of repeating itself perhaps a little too much at this point, but Quest To The Future is ultimately worth picking up for fans of battle-heavy RPGs.