Are you a real gamer? Are you a real hardcore gamer? Do you like games that will punish you and leave you begging for mercy? Congratulations, Lost Socks: Naughty Brothers (Free) is the game for you. This auto-run-and-gun game boasts fantastic art, well-done gameplay, and tough difficulty. Perhaps too tough for most: its progression gating that is so punishing that you’ll beg to pay money to the developers to take shortcuts. And the game will look down at you and whisper “No." 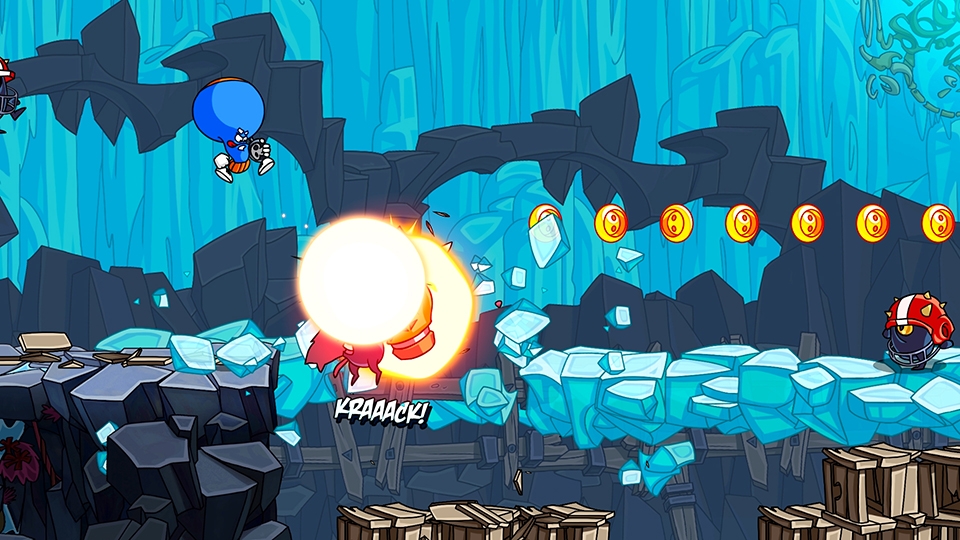 Lost Socks has you controlling a well-armed anthropomorphic sock, always running forward with the ability to slowly descend on jumps. As well, this eponymous lost sock carries two kinds of guns – a weaker primary gun and a stronger weapon with longer recharge time. Rounding out your abilities is a dash attack that can burst through enemies and projectiles. All sorts of combos can be done with these, with recognized rewards for blasting multiple enemies at once, dashing through bullets, and more. All come with appropriate visual flourishes. The levels also have stars that you can collect by freeing prisoners in cages; you not only have to go down the path they’re in, but you also need to dash through the cage. This little note is a particular challenge because you often have to dash to get to the cages, and then try to dash through them!

The levels are scripted, so you can learn how they work, but the threats are constant and numerous. You’re reacting to everything coming at you and using your weapons and abilities well. You’ll be trying to time the cooldowns in such a way that you aren’t left helpless to a potential threat. The levels are also multi-layered with tons of branching paths, so you are bound to discover something new with each run. The game does give you indicators for whether a star is going to be down the path of your choice or whether it just has lots of coins. 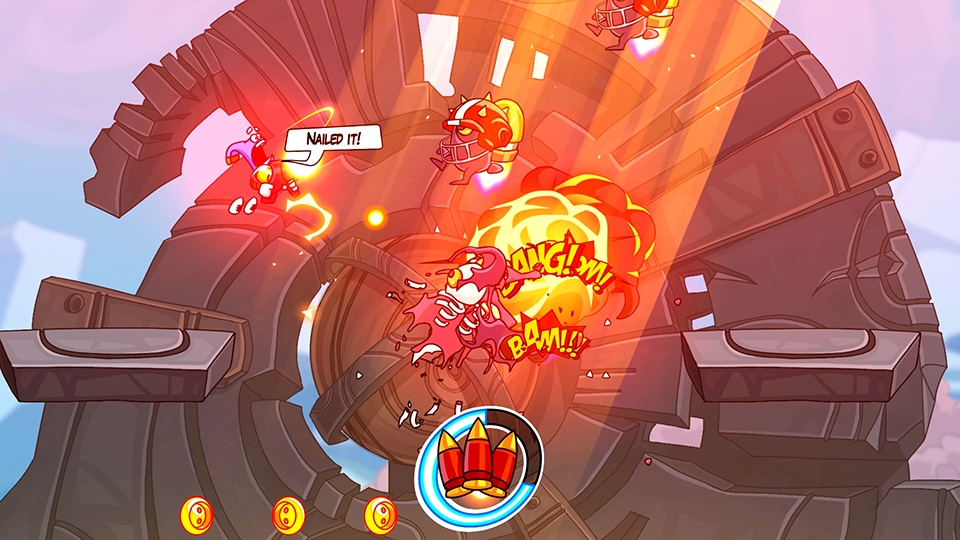 Lost Socks feels a lot like a Rayman game in a way that’s both familiar, but nonspecific. I can’t quite put my finger on it. The art style is fluid like the Rayman games, and it is an auto-runner like Rayman Fiesta Run ($2.99), yes. But it’s a run-and-gun game. And the art style is definitely different. The protagonist feels similar, but not quite? The difficulty and maybe the levels remind me of Rayman Classic (Free)? But still, there’s nothing specific about this at all that should feel like Rayman but it still vaguely does, yet still like its own thing in a good way. And the production values are fantastic on Lost Socks. It’s a vibrant, colorful game that’s animated well. It’s detailed without feeling cluttered. There’s just enough in the way of visual effects to make the world feel alive, and not let interactive environmental elements blend in too much.

And the quality extends to the gameplay. The combat gives you lots of options. It is satisfying to do things like dash through enemy bullets, then launch a rocket to take out 3 enemies at once. The button layout with three attack buttons on the right side means there’s going to be some mis-taps in the heat of battle. Regardless, the combat is so much fun that it’s satisfying to just jump back in and blast all the enemies. It’s the kind of game that just melts into your hands. 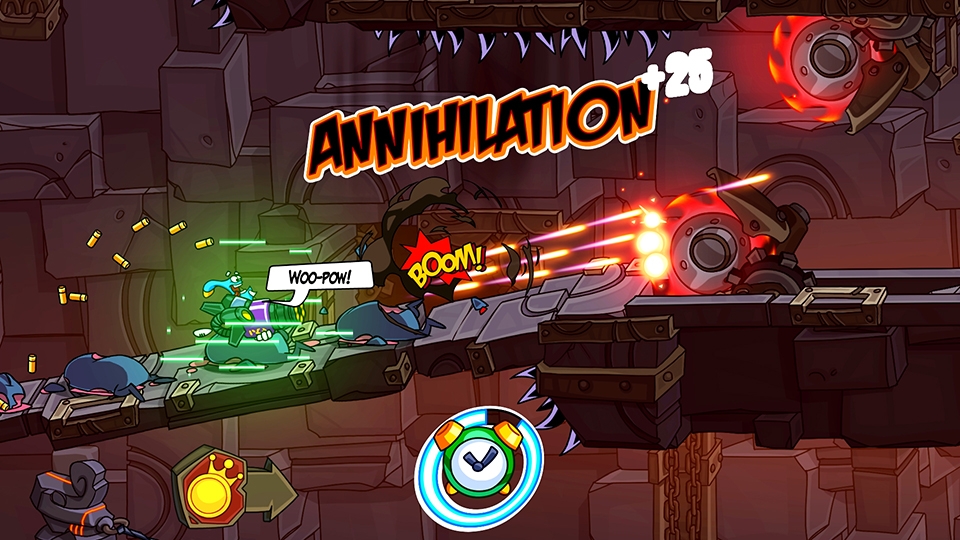 Lost Socks feels a lot like a game that was once meant to be free-to-play, with the different weapons and perks you can buy, not to mention the three-star system and winding level path. I can surmise one of two things happened here. One is that the developers were just inspired by free-to-play games, but wanted to do so in a premium hardcore mobile action game. It’s the best of both worlds, where you get the familiar progression of free-to-play games, but without the IAP. Or perhaps late in the game’s development they decided to switch to paid, taking out all the in-app purchases and just giving out more coins to where buying new guns and upgrades is easier.

The rub is that unlocking new weapons and levels is kind of difficult that the Vatican could decree it as proper penance for your sins. See, each level has 3 stars, and a high score super-star. Getting the 3 stars is tough enough as it is, as you have to follow certain paths in levels and execute certain actions in time. That’s not to mention completing the level in one piece. There’s no checkpoints, either. The stars are necessary to unlock better weapons, along with the later parts of the game. But do not be a fool like me, and don’t go for the super-stars at all. You will hit a wall where you will get underpowered weapons and can’t progress further without getting many of the super-stars. To wit, I got focused on getting 3 stars in levels, mostly ignoring the super-stars as getting the requisite amount of points is rather trying. Behold my surprise when I got to the 3rd world’s gate: I had several more unlock points to get, only possible through the super-stars. 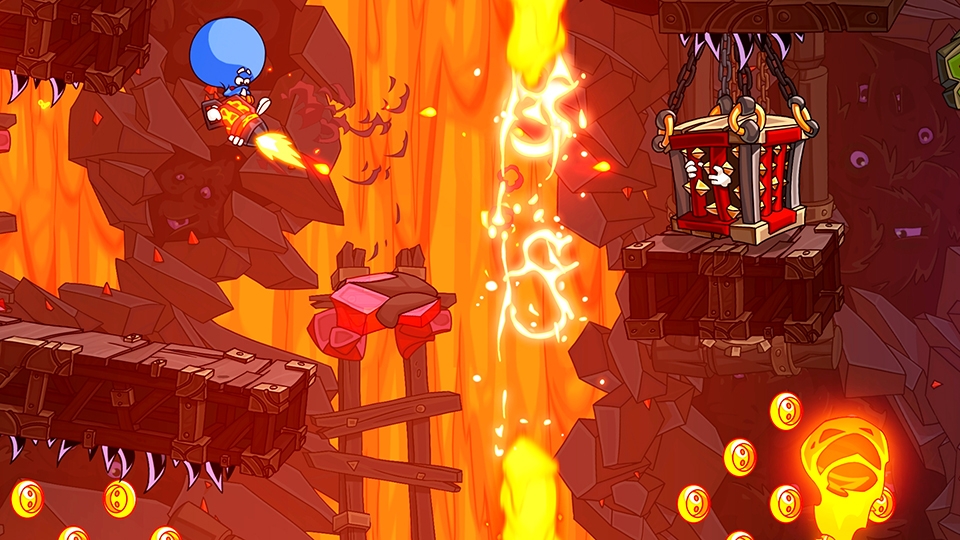 Now, some people will enjoy this brutality. You pretty much have to 100% this game. But if you’re someone who wants to just play the game and enjoy it, well, too bad! You have to master Lost Socks to progress. If you throw your device down at any point, I wouldn’t blame you, because this game is Dethphone-level brutal. Maybe old school games were difficult and didn’t let you continue, but Lost Socks puts up a good fight to just play through it normally! Then it makes you be an MLG-tier expert at it just to get to the position where you could play through the levels to beat it. You will beg for in-app purchases for better weapons or to unlock the later parts of the game. And Lost Socks will give you no reprieve. All must suffer.

Somehow, the game somehow manages to be this cruel without being all that frustrating and unfair. The quick restarts when you die and the generally short levels help out with that. There’s just something about the way the entire game comes together that counteracts its brutality. The game puts a task at your feet, to progress through the game, which feels impossible. It should make you want to give up and go play something a bit more friendly and possible. And yet, the game is so compelling that it somehow manages to make me not want to rage quit and delete the game. The idea of going back and getting those near-impossible super-stars seems somewhat palatable. I’m glad I’m done playing this game, but the fact that it’s somehow still fun despite seeming hopeless is a ridiculous achievement for Lost Socks. Only the most hardcore gamers should play this, but those who do will find a challenge worthy of them.