One Man Left’s classic Tilt To Live ($2.99) series is a favorite of mine, partly because of how it subverted expectations when it came out in 2010. It looked like a shooter, with the main gimmick being that you tilted your device instead of using on-screen controls. Of course, that wasn’t the only “gimmick”, as it turned out the game wasn’t even a shooter at all. Your job was to avoid enemies, rather than hunting them down. That doesn’t mean you were totally defenseless, though, as there were many power-ups that allowed you to turn the tables on the evil red dots. Gerald Kelley’s new game Abzorb (Free) lands even closer to the pacifist side of the spectrum, as you don’t even get power-ups to defend yourself. All you can do to avoid death is run away. Is it anywhere near as fun and frantic as Tilt To Live, though? 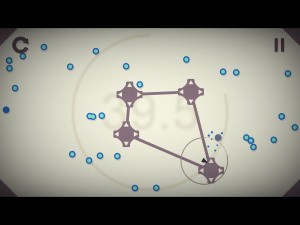 Well, luckily Abzorb has its own little twist on the formula. Yes, you’re still tilting to live, but your goal isn’t simply to last as long as possible without touching bad dots. Your goal is to absorb the good dots floating around the screen, and once you’ve cleared all of them you can move on to the next level.

Yeah, that’s another difference: it’s level-based rather than endless. That matters, too, because it allows each level to act as a sort of puzzle with very specific challenges. For example, some levels might have barriers that only certain types of dots can pass through, or special structures that stick to your “ship”, or dots that only move when you tilt while you’re confined to a small area. I know I’ve compared Abzorb to Tilt several times already in this review, but in my opinion this level-structure is really what sets the two apart. 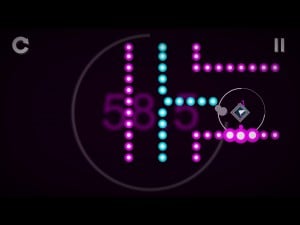 All of these differences are unique and clever and interesting, but one difference I don’t like as much is the way the tilting feels. Tilt To Live was one of those games that just about everyone held up as a prime example of accelerometer-based controls working perfectly, and I can’t even count the number of times I read things like “[insert new game] has tilt controls only? Ugh, I hate tilt controls. Except Tilt To Live, of course” on the TA forums. That game set a high benchmark with controls that were fast, fluid, and precise. Shockingly so for the time. Abzorb, on the other hand, feels a little slow and stiff. I can understand why the developers chose to go that route since this game often requires steady hands and very careful movement, but there were many times where I wished I could crank the sensitivity and fly across the screen.

Of course, the game got updated with new controls as soon as I wrote all that, so if you’d like to try those instead you’re welcome to it. You still can’t change the tilt sensitivity, but the new controls do allow you to touch the screen like a top-down shooter. In my brief experience trying them out they seem to work quite well–even better than tilting, potentially–but it does kind of ruin the magic. (Tilting is lots of fun, but why would I use that if I can get better results with touch controls?) 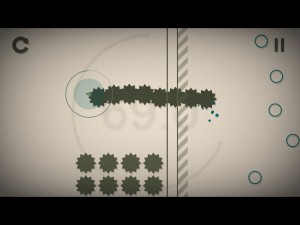 Controls aside, let’s explore the game’s central mechanics a bit further. We’ve already established that there are good dots (blue) and bad dots (orange), and your goal is to absorb the good ones and avoid the bad ones. To accomplish that, your ship has a ring around it that you must touch the blue dots with. Basically, get as close as you can to them to suck their energy out and shrink them down to useless grey husks. There’s a large timer constantly ticking down in the background, and if you don’t absorb all the blue from the screen fast enough you’ll fail the level. If you get too close to an orange dot and absorb its energy, that scary timer will count down even faster. It’s all very clever, and it’s especially enjoyable since I love game mechanics that reward you for getting close to stuff. (That sounds weird, but think about AaaaaAAaaaAAAaaAAAAaAAAAA!!! ($3.99) and Breakneck (Free) as examples.)

With its tilt-based controls, single-screen environments, and arrow-and-dot based characters, you’d be forgiven for thinking Abzorb was trying to be the next Tilt To Live. Luckily, it has a surprising number of clever new mechanics that set it apart from its obvious inspiration, to the point where at some points it almost feels more like a puzzle game than anything else. As brilliant and refreshing as many aspects of the game are, though, I felt like there was always something keeping me from fully enjoying it. Maybe it was the slightly stiffer controls, or the somewhat plain visuals (though you can unlock new color schemes), or maybe I was just slightly disappointed that the game so often evokes Tilt To Live without quite living up to the same heights. Don’t let that deter you from giving it a try, though, as it’s definitely fun and easily worth a measly three bucks.