Clash Royale (Free), Supercell’s latest game, has just released worldwide, and I’m sure many of you will be playing it for the first time today. So, we thought you’ll probably need some help getting the most out of the game because the more you win, the more fun you’ll have. And if you haven’t thought about trying it out, I suggest you download it because Supercell has managed to pack plenty of strategy in a very refined, and good looking, package. Add to that a pretty good monetization model that lets you get plenty of good cards and have a lot of fun without paying a dime (if you so wish), and you can understand why Supercell has a winner in its hands and why you should be playing it. If you’re just starting out, this relatively short guide will teach you the basics of Clash Royale and get you playing well and winning battles. So, without further ado, let’s jump in. 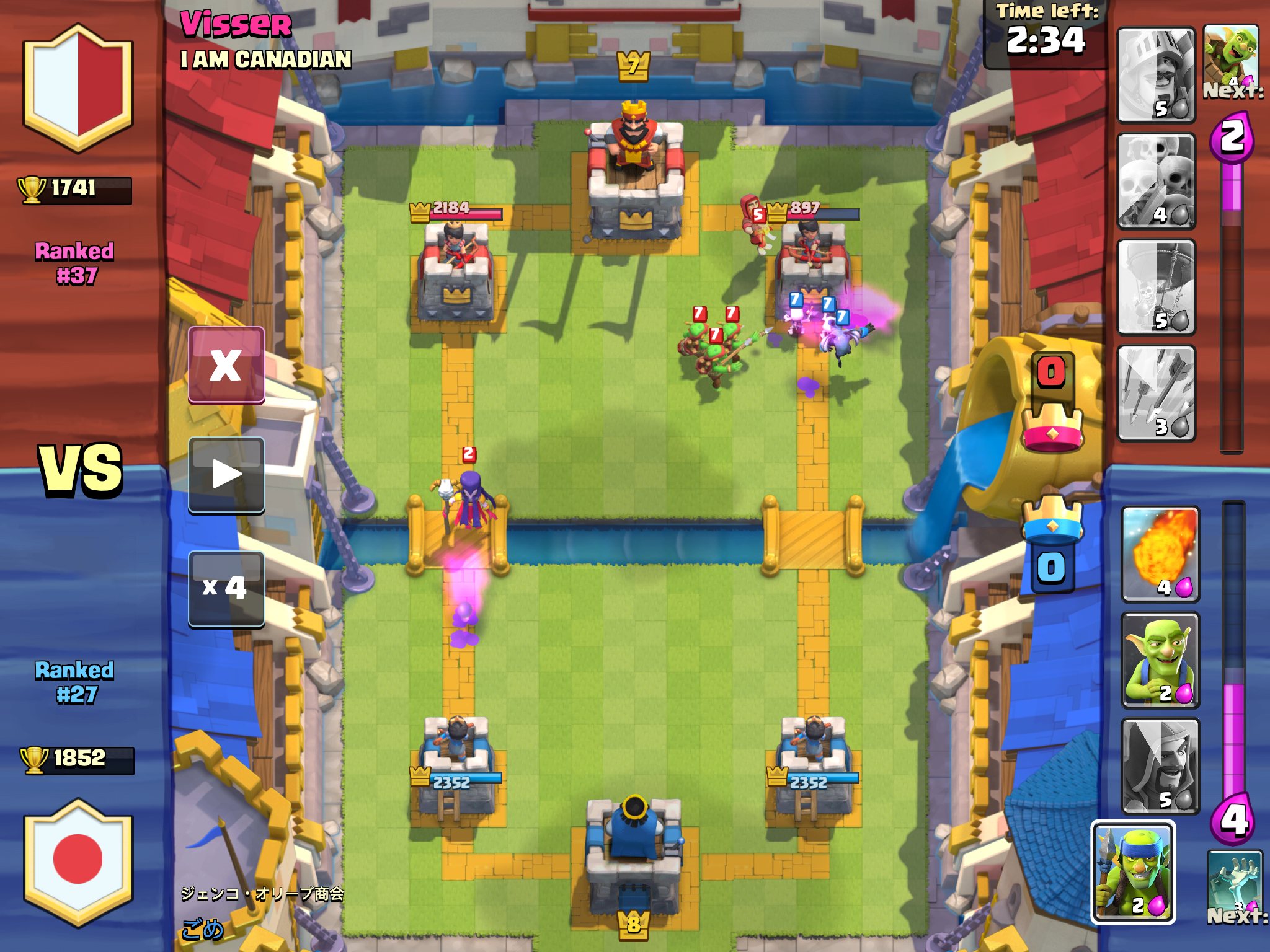 The basic concept of Clash Royale is that it’s a real-time strategy game where you use cards to summon units, buildings, or use potions, in an attempt to destroy the opponent’s Arena towers (the two towers to the sides of the screen) and the Crown tower (the one in the middle). Usually you’ll take out at least one of the Arena towers – since when you summon units, they’ll head to the closest Arena tower – and then the Crown tower, which automatically wins you the game. In the beginning of the game, you can only deploy troops on your half of the arena, but when you take down an Arena tower, you can deploy troops on the opponent’s half, too.

The first thing to keep in mind is that you don’t need to take out all the towers to win; you just need to take out more than the opponent in the 3 minutes the battle lasts (plus 1 minute of extra time if it’s a tie). So, it’s important to keep an eye on defense too because sometimes you’ll win just by taking out one tower and protecting all three of yours. Also, you don’t control the units, you simply release them and watch them go towards the opponent’s towers. Some units can be distracted more easily than others, but in general they will simply go towards the other side all the while attacking whatever comes into their range.

Troop Cards in Clash Royale are roughly divided into ground troops, air troops, melee troops, and range troops. When you check the description of any unit, you’ll see that each has an elixir cost, how much elixir you need to have in order to play that card. Also, you’ll be able to see whether it can attack ground units, air units, or both; keep that information firmly in mind because you’ll need to have a deck that can attack both. If you don’t, your opponent will smash you pretty quickly. Your battle deck can have up to 8 cards, and you can now have three different decks that you access by tapping on the three numbers on the top right of your card collection screen.

When you build decks, make sure to have cards with a variety of elixir costs because if you only have high-cost cards, you’ll often find yourself unable to play any unit and you’ll be defenseless. Also, make sure you check the stats of your cards to pick the best ones for the role you want. Buildings can be quite strong weapons in this game because they can act as protection for your towers and are perfect for distracting enemy’s units. Also you’ll want to include spells (which cause Area damage) like Fireball and Arrows. Those kinds of cards are perfect for taking out high-count units (cards that summon many weak units) like the Skeleton Army. Finally, keep in mind that as you play the game, you’ll get more copies of the cards you have. Those aren’t useless since they allow you to level up your cards, making them stronger.

So, you’ve made a half-decent deck, now what? Here are things you need to keep in mind when playing. While you play, your elixir bar will slowly fill up. During the last minute of the battle, the elixir will fill up twice as fast, so it’s important to be prepared to see more units during that last minute. In general, don’t just play cards because you have enough elixir; if you do, your opponent will simply wait until you’ve used up all your elixir and then attack where you can’t defend or use the appropriate units to counter yours. Instead, first let the elixir bar fill up so you have plenty of options, and then go with one of two options: either deploy a card first, which will give you the advantage of having the first unit on the field while also refilling your elixir before your opponent, or wait until your opponent deploys a card and then pick the right counter. I usually try and throw a decoy in (if I have a deck with cheap units) to force the opponent to waste elixir on my 1 or 2 cost unit. That way, I can see what units he has and counter accordingly.

Speaking of low-cost unit, those are usually good cards to play first because they give you more flexibility for the first part of the battle. If you throw a high-cost card in, you’re suddenly left with fewer choices until your bar fills up again. Keep in mind that as you battle, you can see to the left of your hand which card will be the next to appear in your hand. Keep this info in mind since it helps you strategize better. Another slightly more advanced tip to keep in mind is that you can play slow units as close to your side of the screen as possible because that gives you time to build elixir and deploy another unit to accompany the slow one further up the field.

Another thing to keep in mind is that usually, super strong units can be taken out by a card that spawns many weak units since these will swarm the stronger units and take them out fast. That’s the way to counter units like Giants, for example. Also, some units, like the Valkyrie, deal area damage so use those to take out those units that will try and swarm you. As you play, you’ll figure out how to counter each unit. Keep in mind that you don’t always need to counter every single unit the opponent throws your way; if it’s just a weak unit, let your towers take it out and focus on your attacks. Players will very often try and make the opponent deploy units unnecessarily, so don’t fall for that.

One unit that you need to keep an eye out is the infamous Prince, a very strong-looking unit that does 2x damage when he charges. When new players encounter this unit for the first time, they think it’s way too overpowered because they don’t know yet how to deal with it. However, it’s also the first moment when you realize that every seemingly-strong card has a counter. For instance, what you can do with the Prince is throw a weak unit his way to absorb the charge and then either swarm him with a unit like the Skeleton Army or throw a stronger unit to take him out. As long as you can avoid having him hit your strong units or your towers while charging, he’s easy to deal with.

When it comes to which tower to attack when, a good tactic is to try and get the battle going on the side of your healthiest tower. That way, your opponent has to waste units defending from your attacks on the side that suits you and won’t be able to attack the side with your weaker tower. In order to shift the battle to where you want it, you can throw a defensive unit on the side of your weaker towers and then some strong, aggressive units on the side you want to attack. That way, your opponent has to deal with your attack and will be forced to deploy units on the side that works best for you.

Also, sometimes a tower will go down no matter what, so there’s no point in wasting all your units defending a lost cause. I will often let the opponent go crazy taking out my tower while saving as much elixir as I can to unleash a very strong attack and take out his tower, bringing the battle back to a tie. Keep in mind that if the battle goes to overtime after the three minutes, the one who takes out a tower first wins, so in that case, make sure you defend towers to your dying breath.

When you win battles in Clash Royale, you get Treasure Chests that give you cards. Primarily you’ll be getting Silver and Golden chests. Also, every four hours you get one free chest (but you can only store two free chests at any given time), and there’s also the Crown Chest, which you get for collecting 10 Crowns (destroying 10 towers) but can only get one every 24 hours (if you miss a day, you can potentially unlock two chests instead of one). You’ll have four slots for chests, and you can only be opening one at a time. Each chest takes a certain amount of time to open, with Silver Chests taking 3 Hours and Golden Chests taking 8 hours to unlock. What I often do is unlock Silver ones during the day (when I know I’ll be able to open the next chest the moment the previous one is done), and unlock the Golden ones when I’m asleep. You can use gems to open them faster, but I wouldn’t bother doing that since you can still play while the chests are unlocking.

Once you fill up your chest slots, you might think it’s not worth playing since you can’t get any more chests. However, even though you won’t get a chest, winning will allow you to level up, and leveling up gives you access to other Arenas to play in, new cards to collect, and better chests to open. So, keep on playing even with all four slots filled. Finally, you can get gems by getting achievements (found when you tap the little award icon on the Battle Screen). Joining a Clan will get you gems, for example, and so will collecting a number of cards.

Well, that’s all from me for now. As you can tell, this game is quite complex, and this guide is only scratching the surface. The guide should get you on your way to winning more battles and getting more cards, which in turn should help you enjoy the game more. We’ll have more guides on the site soon, since there’s a lot we still haven’t covered. Until then, go enjoy one of the most addictive games to come to iOS in quite some time.